The only other time that anyone can recall this situation happening in the modern era was more than a decade ago, with the NFL’s Baltimore Ravens, when former University of Miami Hurricanes cornerback Duane Starks, safety Ed Reed, and linebacker Ray Lewis were Ravens starters during the late 1990s and early 2000s.

“It doesn’t happen very often,” says former longtime Dallas Cowboys Vice President of Player Personnel Gil Brandt, who has been a superior evaluator of NFL talent for more than 50 years and now is the primary personnel expert for NFL.com.

“It’s obviously something the University of Utah should be very proud of,” Brandt says. “They have such a good program.”

Brandt notes that Starks, Lewis, and Reed were all first-round draft picks. The three former Utes, however, didn’t have such auspicious beginnings. “The thing that makes it interesting is that these three guys weren’t first-round choices and are starting. That’s the rarity.” 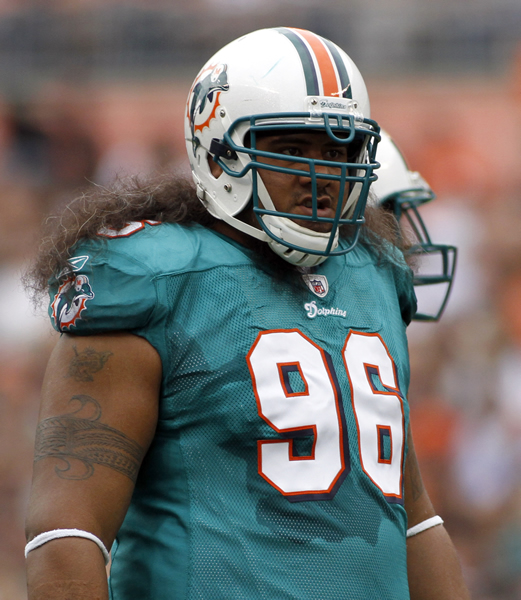 Paul Soliai’s fellow Utah alumni say that he has been a mentor for them in the NFL.

Soliai—who was born in Orange County, Calif., and grew up in Pago Pago, American Samoa—had a difficult path. “At Coffeyville [Kansas] Community College, I was an offensive lineman before starting one year as a defensive lineman [at Utah] and then being drafted by the Dolphins,” says the 360-pound nose tackle who appears up close to be nearly as big as a Smart car. “Utah gave me another chance. I thought football was done for me. I thank Utah for everything in terms of getting me where I am right now.”

Although Soliai was very successful in college, especially as a senior in 2006, when he recorded 35 tackles, 3.5 for a loss, two sacks, four pass break-ups, a forced fumble, a fumble recovery, and a blocked kick, his transformation into an elite player took place with the Dolphins.

“Coming up into the NFL, learning how to play a real true nose tackle [in a 3-4 defense] in the league, was kind of hard,” Soliai admits. “Before that, I was a 4-3 guy, so it took me a couple of years to learn the system and become one of the best nose tackles in the league.”

He worked his way to become a full-time starter in 2010. For those who don’t know, in a 4-3 defense, a lineman doesn’t play the same position or technique as in a 3-4. An interior 4-3 lineman is called a defensive tackle, and a 3-4 lineman who is in the middle is a nose tackle because he tends to line up over the nose of the opposing center. The nose tackle in a 3-4 has to clog up the middle and constantly take on double-team blocking from the offensive line to free up linebackers to make plays. In short, it’s a thankless position that leaves little room for individual statistics and accolades.

“You have to stay stout and always hold your ground so you can take on the double teams,” Soliai says. “You pretty much want the ball to always go outside instead of inside.”

Soliai’s emergence on the NFL level earned him Miami’s franchise player tag and a one-year salary in 2011 of approximately $12 million. The mammoth defender will be a highly sought-after free agent when the recruiting season begins March 13.

The Dolphins hope to re-sign Soliai, who is 28, for his skills on the field and for being a mentor off of it. Not only does he regularly host his fellow Utah alums and other Dolphin players at his famous barbecues, he has also been an invaluable resource to his younger counterparts about what the NFL is like. “Paul made things a little bit easier for me,” Misi says. “He helped me get acclimated [to the NFL]. I didn’t really feel like I was a newcomer in the league, even though I really was.”

Soliai played a similar role in Smith’s arrival. “Paul took me in and talked to me,” Smith says. “He explained to me how things go in the NFL.” 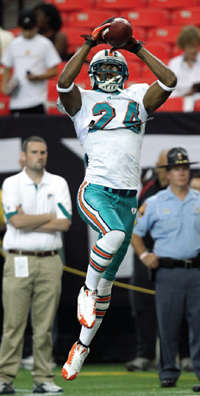 Former University of Utah player Sean Smith is the tallest starting cornerback in the NFL.

Smith, who is now 24, was an extremely successful running back for Blair High School in Pasadena, Calif. But with his six-foot-three frame, he was actually a little too tall for the position at the college level. “Utah was the only place to give me a chance to play Division I football,” Smith says. “The University of Oregon kind of backed out at the very last second—which kind of only left me with one option.”

Not that Smith isn’t extremely grateful—even if it meant trying a new position or two at the University of Utah. “It was difficult at first. Initially, I tried out for safety, and that didn’t go so good,” he says with a laugh.

“I went from there to corner, and I went to Coach [Kyle Whittingham] and said, ‘I don’t know if I can play that,’ but he gave me a shot at it, and things just worked out from there,” Smith says.

Now Smith is succeeding with the Dolphins, despite once again fighting concerns that he is too tall for his position. In fact, he is the tallest starting cornerback in the NFL.

“Corner is pretty much a small man’s game,” Smith acknowledges. “It’s all about being quick and fast. Those aren’t really my strengths, so my coach [secondary coach Todd Bowles] has me spend a lot of time in practice staying low and using my technique. Tall guys tend to get tired and then play high. That will get you killed at corner.”

While Soliai and Smith certainly have overcome their share of challenges, Misi is perhaps the most improbable NFL player of the three. Coming out of Montgomery High School in Santa Rosa, Calif., Misi had scholarship offers to go play at Oregon and San Diego State.

“I took a year off from football and went to [Santa Rosa] Junior College, concentrated on being a student, and got a job,” he recalls. “I got my own place and paid my own rent. But I missed football.”

“Throughout the whole recruiting process, I ended up getting overwhelmed with the whole thing,” Misi says.

Misi, who is now 24, played one year of junior college ball before Utah came calling. It was a perfect match for a man who values those closest to him. “I actually have a lot of family out in Utah,” Misi says. “Kalani Sitake, the current Utah defensive coordinator there, is a member of my family, too. My grandma was really happy because I had family around me. [On the field], it was a great group of guys. Utah felt like my second home.” 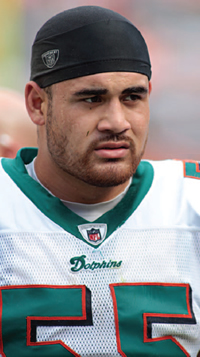 On the field, Misi had 4.5 sacks as a rookie in 2010, but his numbers are somewhat down in his sophomore campaign as he tries to develop his all-around game to go with his nonstop motor and athleticism. The Dolphins also brought back longtime stalwart Jason Taylor during the offseason to play on passing downs, so Misi’s ideal sack opportunities have—for the moment—been diminished.

While Miami struggled in 2011, none of these three players has shown the least bit of drop in his resolve.

“The only thing I can control right now is doing what I have to do, which is cover receivers and come up in run support,” Smith says. “I am definitely not satisfied [with how we are doing as a team], but at the same time, I know I can definitely play better and help the team.”

Overall, the general consensus among NFL personnel evaluators is that all three players appear to have bright futures in the NFL and aim to be in the league for a long time. Their success is just one reflection of a Utah program that has several other players currently playing in the NFL, including quarterback Alex Smith BS’04 (San Francisco 49ers), offensive tackle Jordan Gross BS’02 and wide receiver Steve Smith ex’00 (both Carolina Panthers), and defensive tackle Sione Po’uha ex’05 (New York Jets).

“They are able to get guys in there at Utah that know how to play football really well,” Misi says. “The coaching staff there is exceptional, and for them to send guys to the NFL like they’re doing really says a lot about the program.”

—Robert Hoffman is a communications instructor at Pennsylvania State University and a freelance sportswriter who is a member of the Professional Football Writers Association.