“I’m here to pick up an order of potassium nitrate,” the boy announced.

Earlier that morning he had dressed in a gray shirt and gray pants that maybe looked like a uniform, then had driven his motorcycle to a chemical company in downtown Salt Lake City, where he handed them what he hoped looked like an official piece of paper.

He was bored by school, but he had been captivated by President John F. Kennedy’s speech about putting a man on the moon, and he daydreamed of being an astronaut himself. (It would be an excellent way to meet girls, was his line of reasoning.) First, though, he would build a rocket.

And so on a sunny morning, in his parents’ garage, he packed the potassium nitrate, some sulfur, and charcoal into a 16-inch length of metal pipe. This was in 1962, so the boom that happened next caused neighbors even blocks away to glance nervously up at the sky for Soviet bombers. But his next-door neighbor, who was taking laundry off the line in her backyard, ran toward the sound, hauling sheets and towels with her.

Something had ignited the chemicals prematurely, and inside the garage the young rocket builder was bleeding profusely. The neighbor, who happened to be an army surgical nurse, used her clean laundry to make tourniquets to keep him from bleeding to death.

The explosion blew off four fingers of one hand and the thumb and one finger of the other; it destroyed the sight in one eye and partial sight in the other. Over the next nine months there were nearly 30 surgeries. And, in the end, when the doctors had done all they could, 17-year-old Russell Redenbaugh was completely blind. His mother wept for his future.

Now he’s 72. His résumé includes a B.S. (’67) from the University of Utah, an MBA from the Wharton School of Business, co-ownership of a flourishing investment advisory and research company, 15 years on the U.S. Civil Rights Commission, a black belt in Brazilian jiu-jitsu, and three world championships against sighted opponents.

He doesn’t want to inspire you with these facts so much as pour them over you like a bucket of cold water. And he wants to offer you a no-frills mantra, clearly written by the economist that he is: “The rate of return on being a victim is very low.”

The problem with inspirational speakers, he says, “is that what they say usually wears off by the time you get to your car.” So instead of urging you to have positive thoughts, or to adopt a list of successful habits, Redenbaugh wants you to first investigate whether your life has an underlying narrative that is holding you back. That’s the bottom line of his 2017 book Shift the Narrative: A Blind Man’s Vision for Rewriting the Stories That Limit Us. It’s part memoir, part low-key manifesto.

“I continue to look on with amusement (and a slight amount of pity),” he writes, “at the people who are on a lifelong search for the holy grail of self-improvement, the completely painless, risk-free, transformational ‘life change’ pill. There is no return without risk and effort.”

“Find the obstacle and clear it,” he says. “It’s like road building: first, cut down the trees.”

During the six weeks immediately following the rocket explosion, his father sat by his hospital bed every evening and read to him from novels and poems full of can-do heroes. His favorite was William Ernest Henley’s “Invictus”: It matters not how strait the gate,/ how charged with punishments the scroll,/ I am the master of my fate,/ I am the captain of my soul.

Six months later, in the winter of 1963, he was again in the hospital, this time in San Francisco, where doctors tried to save his partially damaged eye but failed. His mother sobbed at the news, envisioning that he would be unemployable for the rest of his life. But he already he knew what he would not tolerate: “I will not be poor,” he announced; “I will not be dependent on others; I will not live at home, be led to the bathroom, fed and walked.” He would live an active life, “in a sighted world doing sighted things.” He now calls these pronouncements “declarations.”

“Declarations,” he says, “are the closest thing there is to magic.” 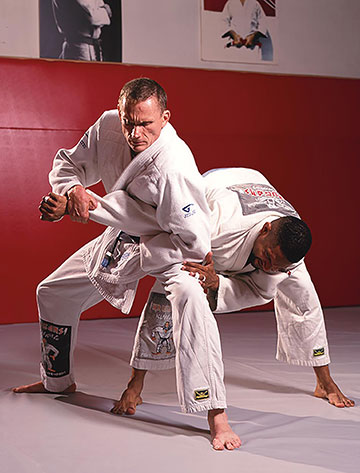 “He just wanted to keep on living,” remembers his high school buddy Darryl Milczarek BA’70, who took him snow skiing and waterskiing after the accident. While he was still in the hospital, Redenbaugh applied for a guide dog. With Minka at his side, he finished high school, entered the U, pledged Sigma Nu, and convinced his fraternity brothers that if they read his textbooks to him they would get better grades.

He had been a lackluster student in high school. But now, with new motivation, he excelled academically, winding up No. 1 in his class in the U’s business school. And then he made another declaration: “I will get an MBA from a prestigious university.”

He applied to Harvard and Stanford and was turned down by both. Each explained that a blind student wouldn’t be able to complete the program—although, as Redenbaugh pointed out, how could they know that if they had never admitted a blind student? (Years later, after he had made a lot of money as an investment adviser, he sent the dean of admissions at Harvard a copy of his tax return, as well as a yearly $5,000 scholarship, named after his grandmother.)

Rejected by his top two schools, he applied to the third school on his list: the Wharton School at the University of Pennsylvania, taking the train from Salt Lake to Philadelphia to make his case in person. He graduated from Wharton fifth in his class.

And then he couldn’t find anyone who would hire him. There were 49 interviews and not one job offer. Finally, with the help of a Wharton classmate, he was hired at a small money management firm in Philadelphia, Cooke & Bieler—with this proviso: he would in turn hire a sighted assistant, out of his own pocket. If that didn’t work out, Redenbaugh would be let go.

It was an arrangement that would be illegal now under the Americans with Disabilities Act, notes Redenbaugh, who then launches into what at first seems to be a counterintuitive argument—by a one-handed blind man—against the ADA.

“The economy responds to changing incentives,” he begins, “and one of the incentives of the ADA was that it made it hard to hire people who were seriously disabled. No company wants to hire anyone who is ‘fire-proof.’ ” That, he asserts, is the unintended consequence of the act’s provision that if companies don’t provide “reasonable accommodation” to a disabled employee they can be found guilty of discrimination.

Yes, the ADA also had positive consequences, he says, including changing the way Americans think of and talk about persons with disabilities. And, he adds wryly, “it got curb cuts in the streets, which helps people who pull their suitcases.” But the unemployment rate for the seriously disabled has increased (from about 60 percent to over 75 percent) since the ADA was passed in 1990, he says.

Redenbaugh’s politics lean libertarian, based on his belief that the government should get out of the way and let people be responsible for themselves. His credo: “Take care of your own. Mend your own fences. Don’t milk your neighbor’s cow.”

His mother’s younger brother, Jake Garn BS’55, served as Utah’s U.S. Senator for three terms, and it was Garn who introduced him to Sen. Bob Dole, who suggested to President Ronald Reagan that Redenbaugh be appointed to the U.S. Civil Rights Commission. He served as commissioner for 15 years but resigned in protest in 2005, charging that the commission was spending money irresponsibly. His letter of resignation was blunt: “The commission, once the nation’s conscience, is now a national embarrassment beyond repair.” He urged that it be shut down.

In conversation, Redenbaugh is direct, sometimes brusque. “You can’t have an ego and work for Russell,” says Charles Williams, who has known him for 25 years and last year became a sales and marketing specialist at Redenbaugh’s firm, Kairos Capital Advisors. “He’s demanding; but he doesn’t demand more of you than he would of himself.”

Williams describes him as “at his core an investor; and he likes to invest in people.” He recalls sitting in Redenbaugh’s backyard years ago talking about ambition; at the time, Williams was a technician at IBM. “He said, ‘You’re black and I’m blind. It is what it is. You won’t ever be president of the United States’—this was pre-Obama—‘but you can always be more.’ ”

The big takeaway from his thousands of interactions with Redenbaugh, he says, is this: “It’s not what happens to you, it’s what you’re going to do about it.… He’s got a very low tolerance for people being victims. He’ll try to coach them out of it. But if they can’t hear him, or are high maintenance, he’ll just move away.”

In 1988, on a cross-country flight, Redenbaugh struck up a conversation with an executive from Eastman Kodak, the photographic film powerhouse. “What are your plans for digital photography?” Redenbaugh asked his seatmate. “We don’t see it as an alternative to film at all,” the Kodak executive answered. “The quality is so terrible I think it’s a nonissue.” 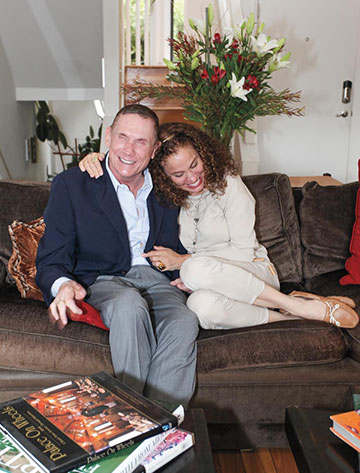 Redenbaugh sharing a laugh with his wife, Natalia.

Redenbaugh’s point: Even big corporations—and investment firms—can be limited in the way they see the world. In the late 1980s, after rising to chief investment officer and a partner at Cooke & Bieler, he thought the firm was operating on an old narrative, one that was afraid to take risks even when the economic landscape shifted after the fall of the Berlin Wall. He had been spending a lot of time in California analyzing tech companies and saw a different kind of future.

Despite his mother’s fears, he left his secure job in Philadelphia and moved to Silicon Valley. He became CEO of Action Technologies, which was designing software that would be a combination of project management and email.

But not all new ventures, even those based on bold declarations and rewritten narratives, are successful. “There are few lessons in easy victories,” he says now to sum up the ultimate failure of both his job as CEO and the product itself, which he says was ahead of its time. Faced with a risk that doesn’t pan out, he says, it’s time to make new declarations and take new actions. Not long after his Silicon failure, he and James Juliano co-founded Kairos Capital Advisors, a now $6 billion investment management firm.

“Courage isn’t the absence of fear, it’s acting in spite of it,” says Redenbaugh. Which brings us to his decision, in his 50s, to take up Brazilian jiu-jitsu, a martial art that’s a cross between judo and wrestling.

“What I discovered was, being blind wasn’t the problem—as long as I didn’t let go of my opponent,” he explains in his droll fashion in a TEDx Talk he gave in 2013. The bigger problem was not being able to grip with his hands; so he modified the technique and fought with his legs and feet. He won his first gold medal in the world championships in Rio in 2003, and golds again in 2004 and 2005. His second wife, Natalia, an international business consultant, is also a Brazilian jiu-jitsu competitor.

At 72, he no longer competes, and aging has forced him to deal once more with narratives that need shifting. But jiu-jitsu reinforced what he learned from his accident a half-century ago: it’s possible to be larger than one’s fears and circumstances. Life, like jiu-jitsu, isn’t static; it’s about making a move, reassessing, making new declarations, moving again.

4 thoughts on “Shifting The Narrative”