Take a walk through the University of Utah campus, and if you haven’t visited in the past few years, you might not recognize it. New structures are ubiquitous, ranging from the Beverley Taylor Sorenson Arts and Education Complex, whose programs are lauded for their potential to impact arts-integrated education on a national scale; to the L. S. Skaggs Jr. Pharmacy Research Building on the health sciences campus that brings together pharmacy faculty once scattered in eight different buildings across campus; and the architecturally stunning Natural History Museum of Utah at the Rio Tinto Center, a sleek, copper-clad wonder nestled in the foothills above Research Park. Indeed, 37 new or expanded buildings were completed or started during the unprecedented, nine-year Together We Reach Campaign for the University of Utah, which is concluding in early summer.

Impressive as the buildings are, though, the campaign goes beyond bricks and mortar and has created additional, wide-ranging opportunities for people both on the campus and beyond. “The Together We Reach Campaign is the catalyst for the transformation of the institution campuswide, from enhancing student experience and the community services we provide, to establishing an institution with an international reputation for innovation and world-class research,” says University of Utah President David W. Pershing.

An evening gala celebrating the success of the campaign was held in May at the Grand America Hotel in downtown Salt Lake City, where Pershing announced that the effort had exceeded its goal of $1.2 billion and raised a stunning total of more than $1.65 billion for the University. Nearly 1,000 people attended the event, while images of the 37 buildings started or completed during the campaign cycled through a rotation on large screens and speakers noted the three focal points the campaign was intended to benefit—students, research, and outreach. 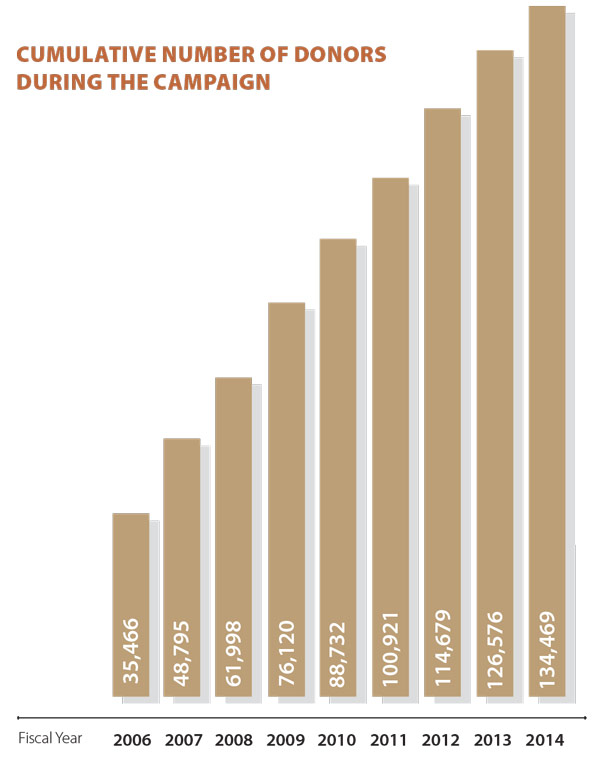 When the silent phase of the campaign began in the summer of 2005, University administrators said the campaign and its theme represented more than just a bold initiative for the campus to expand. The primary goals then were to seek funding for new facilities, research, and student support, with the intent that at least a third of the campaign goal would be reached before the campaign went public. “By that time, we also were planning to more clearly focus and articulate specific objectives in these and other areas, which we did, of course,” says Fred Esplin MA’74, the U’s vice president for institutional advancement.

By 2008, when the public phase was announced, more than 193,000 private gifts totaling nearly $557 million had been raised. Those results were encouraging, Pershing says. “The generous early support of our alumni and friends during the silent phase of the campaign gave us great hope as we entered the public phase in the fall of 2008,” he says. “Buoyed by this show of support, we set the ambitious goal of raising $1.2 billion by the end of the campaign in 2014.”

The U’s two most recent campaigns had been highly successful. The Sesquicentennial Campaign—Generations of Excellence, from 1994 to 2000, led by Spencer F. Eccles, exceeded its goal of $500 million and raised more than $770 million. The Touching A Nation Campaign in the mid-1980s, under the leadership of J. Willard Marriott, Jr., raised more than $250 million. 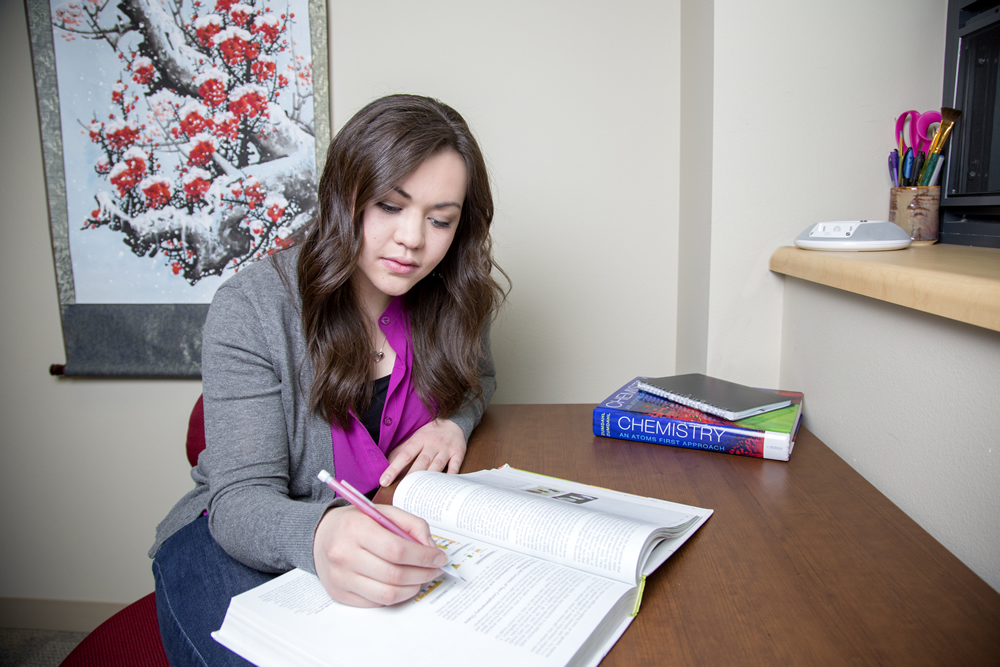 University of Utah student Tianna Tu received a scholarship made possible through the Together We Reach Campaign. She is pursuing an honors degree. (All photos by University Marketing & Communications)

The timing of the Together We Reach Campaign, however, presented some challenges. The transition from the silent to the public phase of the campaign overlapped with the 2008 recession in the U.S. economy, making the $1.2 billion goal seem even more audacious. “We realized these were tough economic times, but advocates for the University continued to show strong support for its mission, and we were optimistic that private support would continue to grow,” Esplin says. “Our alumni and donors realized that educating young people and translating research into new industries were key to getting through the recession by creating jobs and a better life for everyone.” 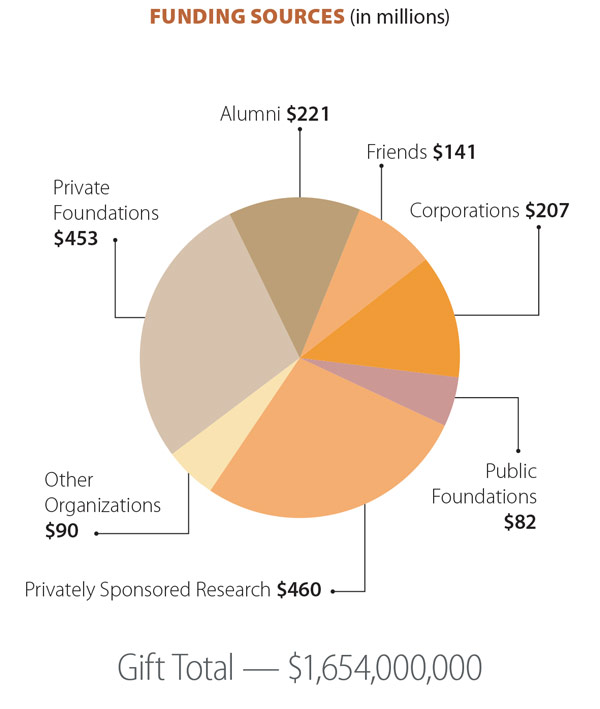 During this campaign, annual contribution totals increased each year, from approximately $139 million raised in 2006 to $223 million in 2013. Support came from all 50 states, with the highest numbers of donors coming from Utah, and then California, Idaho, Colorado, and Washington. After the United States, the highest number of international donors from a total of 56 different countries came from Canada, Japan, South Korea, and the United Kingdom. Nearly 82,000 individuals—64 percent—were first time donors to the U, and the total number of overall donors more than tripled to approximately 130,000.

The campaign counts all private gifts, including corporate and foundation gifts, individual and tribute gifts, matching gifts, and some planned gifts. The funds all help support the construction of new facilities, as well as endowed chairs, professorships and fellowships, special programs, student scholarships, community outreach programs, cultural venues, athletics, and research. “The wide variety of special ventures helped by the campaign will permit the institution to serve more people and have greater impact in the community,” Pershing says. 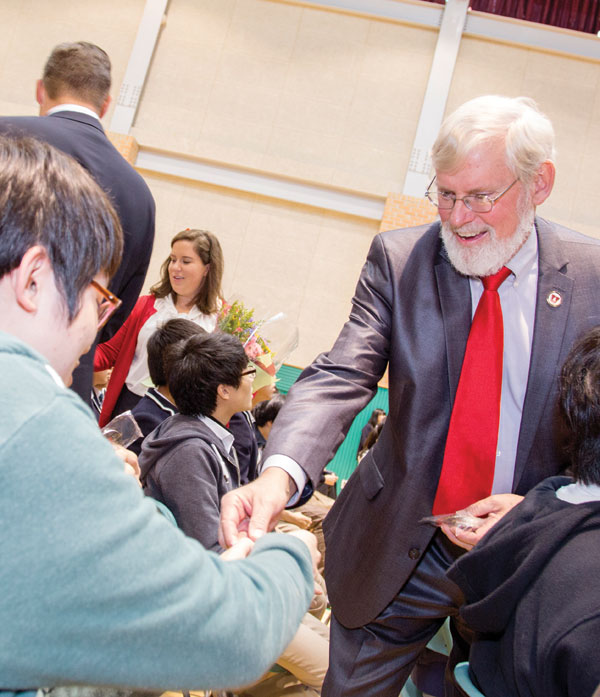 University of Utah President David W. Pershing says the campaign has helped a variety of ventures.

One area that reflects the impact of the campaign funds is the expanded opportunities for study abroad that are now available to more students. Among those learning from such experiences was Collin Bess BS’13, first in his family to graduate from college, who completed a Hinckley Institute of Politics internship at the European Parliament in Brussels, Belgium. Back in Utah, he found it especially gratifying to share his experience with his family and high school friends in his hometown of Hurricane, Utah. Graduate student Robin-Elise Call received the Herta Teitelbaum Study Abroad Scholarship in 2013 and studied in Morocco. And thanks to a private gift to the University Impact Fund at the David Eccles School of Business, graduate students in business administration are helping people in India who are living below the poverty line to start their own businesses.

Students also benefit from the campaign through scholarships to help them pay for their education. Tianna Tu is a recipient of a George S. and Dolores Doré Eccles Distinguished Scholarship and is pursuing honors degrees in political science and international studies, with a minor in Chinese. She learned in April that she had received an esteemed 2014 national Truman Scholarship for post-graduate study. “I grew up in a family that was very close, but my dad was a boat refugee from Vietnam, so we were raised without much financial stability,” says Tu. Worried about tuition costs, Tu applied for and received the Eccles Scholarship, which provides generous financial support and a highly enriched academic program in the Honors College, including living quarters in the new honors housing. “I feel like this gift is the introduction I never thought I’d have, and I just want to take full advantage of it,” says Tu.

Private donations to the Bennion Center, the heart of volunteer outreach service on campus, total 50 percent of its budget, making it possible for the center to undertake new service programs such as Alternative Spring Break, where students travel to Costa Rica to do service in rural Monteverde, learning firsthand about subjects they have been studying in the classroom—ecotourism, sustainable development, and microenterprise. Another Bennion Center program, Running Forward, provides a volunteer-driven running club for youths living in low-income and at-risk circumstances, which builds self-esteem and a positive outlook while reducing the risk of childhood obesity and diabetes through physical activity. Each year, more than 8,500 Bennion Center volunteers dedicate more than 225,000 hours of community service in partnership with more than 46 organizations. 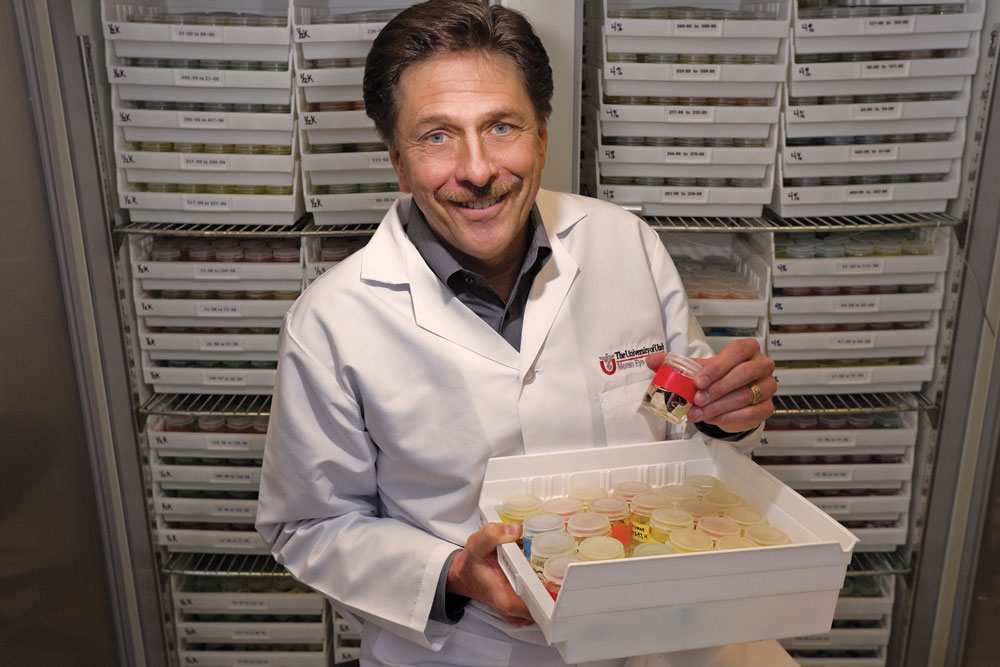 The campaign funds have aided scientific discovery at the University, as well. U ophthalmology professor Gregory Hageman and his team at the Moran Center for Translational Research assess the pathways involved in the origination of age-related macular degeneration, the leading cause of irreversible blindness worldwide. His team’s recent genetic studies have confirmed that common variants in several complement genes confer significant risk for, or protection from, the development of macular degeneration late in life. This breakthrough is considered one of the first major translational research discoveries to come from the Human Genome Project. Hageman says private support has been crucial to the continuation of his work. “Nowadays, federal grants only provide partial funding of any new project, leading to a scramble for other funding on the same schedule,” he says. “Private support is direct and powerful, and it gives us the security we need to move our work ahead so much more quickly and efficiently.”

Pershing notes that the success of the campaign has helped revitalize the campus with the new and expanded buildings, energize faculty who have been fueled by donor support, and create new endowed positions as well as hundreds of new scholarships. “The greatness and success of any enterprise is directly related to the people who devote their efforts to the shared vision for that enterprise,” Pershing says. “The University of Utah has been renewed and energized to proceed into the future with confidence.”