“I’ll never forget Chris Hill walking into my office and asking if I was breathing okay,” Kinneberg laughs. After catching his breath, the Ute skipper sized up the task of competing in a conference that owns 28 NCAA baseball championships. “Where the program was at that point, I knew it was going to be a big job,” Kinneberg recalls.

Other coaches shared Kinneberg’s initial wariness when they learned in June 2010 that Utah would officially join the Pac-12 on July 1 of the following year. “Coaches were excited, but we were also a little apprehensive, and rightfully so,” volleyball coach Beth Launiere remembers. The Pac-12 claims 14 national titles in women’s volleyball, more than any other conference. “We knew we were going to have to grow into it,” Launiere says.

Launiere has fostered that growth, leading her squad to three of the last four NCAA tournaments. And Kinneberg, who like Launiere coached Utah in both the WAC and the MWC, has gone from hyperventilating to breathing rarified air. After finishing dead last in each of its first four Pac-12 campaigns, Utah baseball finally broke through last spring, becoming the first Utah men’s team to win a Pac-12 title. 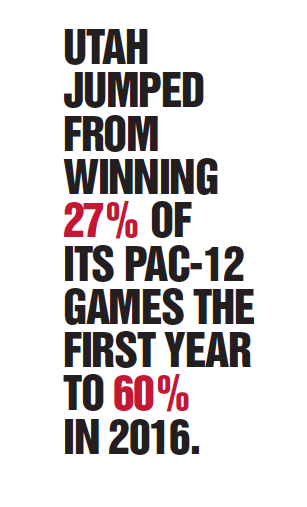 As Utah battles for Pac-12 supremacy in one sport after another, fans and alumni feel compelled to reminisce on a wild five-year ride and ponder an even more exciting future.

For Utah, decades of preparation finally paid off. And yet the real work was just beginning. At the time Utah joined the Pac-12, the conference already owned more than 400 national championships. Outside of skiing and women’s gymnastics, Utah had one (men’s basketball in 1944). From the conference’s 38 national titles in swimming and diving to UCLA’s legendary run of 10 NCAA titles in 12 years in men’s basketball to USC’s six Heisman Trophies, the Pac-12 represents the pinnacle of collegiate athletics.

As one might expect, the Utes struggled early on. In the first year of Pac-12 competition, Utah won 27 percent of its conference games in football, basketball, baseball, softball, soccer, and volleyball, going a combined 36-96. In the most recently completed season (including fall 2016 for football, soccer, and volleyball), Utah finished 75-50-4 against Pac-12 foes, winning 60 percent of league contests. How does a program more than double its output in half a decade? The answer lies in attracting the right student-athletes to Utah, supporting them both athletically and academically, and obtaining the resources needed to do so.

Attracting the right student-athletes to Utah occupies a great deal of head football coach Kyle Whittingham’s attention. “Recruiting, recruiting, and recruiting,” Whittingham emphasizes when asked how he and his staff have built Utah into a perennial Pac-12 contender. The new conference affiliation has opened recruiting avenues previously closed off to Ute coaches, but it has also mandated that Utah attract better athletes to survive the Pac-12 gauntlet. “Everything we do, we ask the question How does this impact recruiting?” Whittingham explains. “From the way we train, the facility, what we feed the players, to the gear they wear. If we do not recruit the right guys, we will not be successful.” Elite high school athletes seek colleges where they can play with and against other elite athletes, and the Pac-12 provides that chance. Whittingham and his staff have made the most of greener recruiting pastures, winning 16 of 27 conference games the last three seasons after claiming just nine league victories in their first three Pac-12 campaigns. 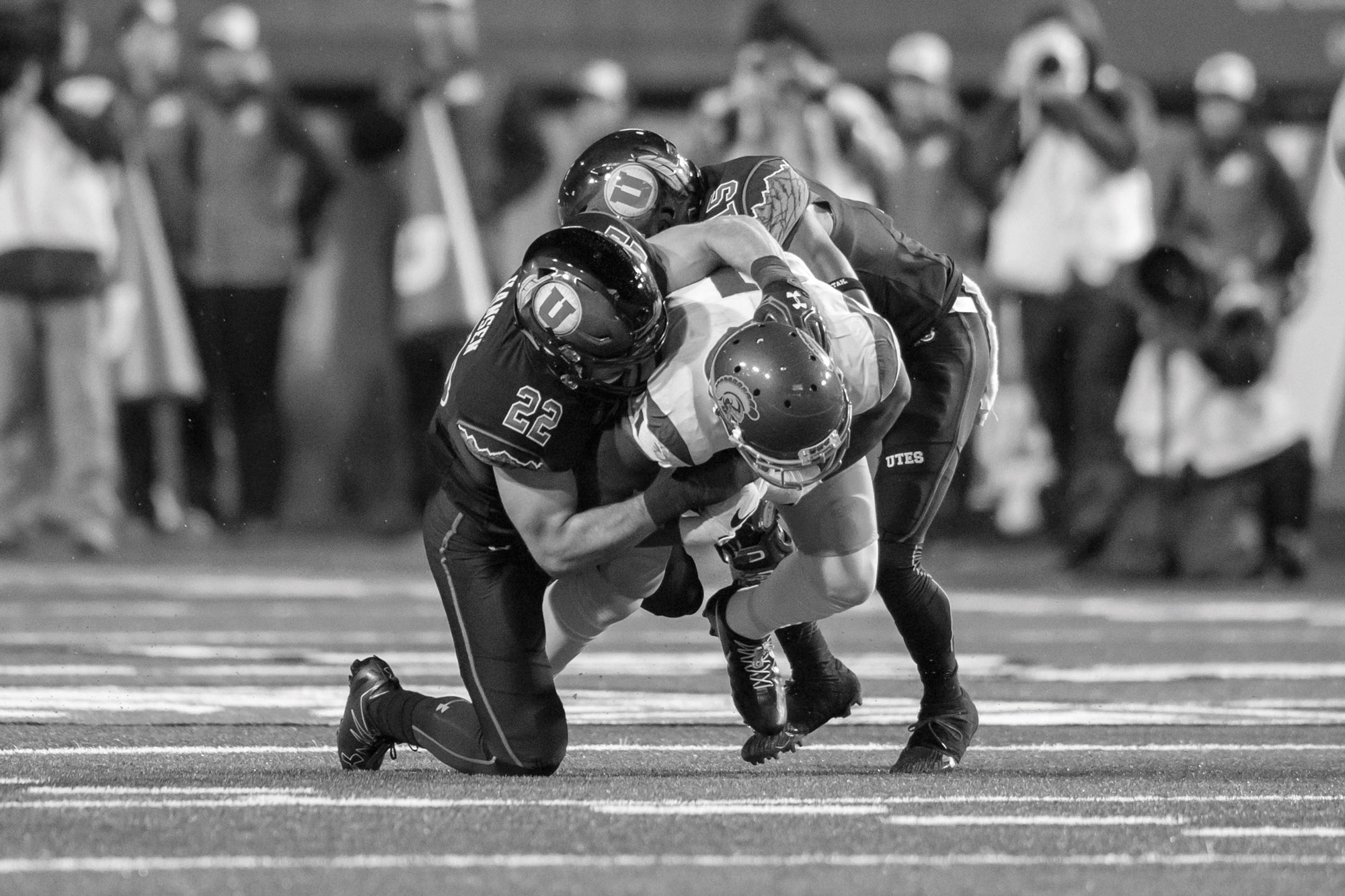 Increased revenue from conference affiliation and national television has afforded Utah more opportunities to hit the road and evaluate the nation’s best high school talent. The Athletics Department’s recruiting budget grew from roughly $700,000 in the last year of MWC competition to more than $1.1 million in fiscal 2015. Getting in front of more kids and touting Pac-12 affiliation has a significant impact. “Our conference has a strong brand, and kids from all over associate our conference with great teams and great programs,” golf coach Garrett Clegg BA’04 says.

Of course, this means Ute coaches nd themselves in heated recruiting battles against traditional Pac-12 powers that have beefy budgets and name brands. “I’ve recruited kids for 18 months, then had USC and UCLA come in and get a kid in an hour,” women’s tennis coach Mat Iandolo laments. The California schools pose an especially formidable challenge across all sports. Iandolo refers to them as the California Four, while soccer coach Rich Manning calls them the Four-Headed Monster. “In the circles we recruit, the California schools still eat first in terms of the food chain,” Iandolo says. “The blueprint is to do a better job of selecting your kids, and do a better job of coaching and training them.”

Upon entering its new conference, Utah also needed to meet the Pac-12 standard for training and supporting its student-athletes. “We’ve built a framework, a support system where we’re able to take care of all their needs physically and mentally in order to help them succeed,” Manning says of the soccer program. Prior to Pac-12 entry, training and strength and conditioning for soccer would be aided by a graduate assistant or one of the football coaches giving part-time support. Now soccer has its own personnel for those critical roles. Recruiting, but also supporting those student-athletes who commit to Utah, helped Manning lead the Utes to arguably the best season in program history in 2016. Utah earned its most wins since entering Pac-12 play, beating both Texas Tech and 10th-ranked Florida State in the NCAA Tournament and finishing 16th in the National Soccer Coaches Association of America rankings. 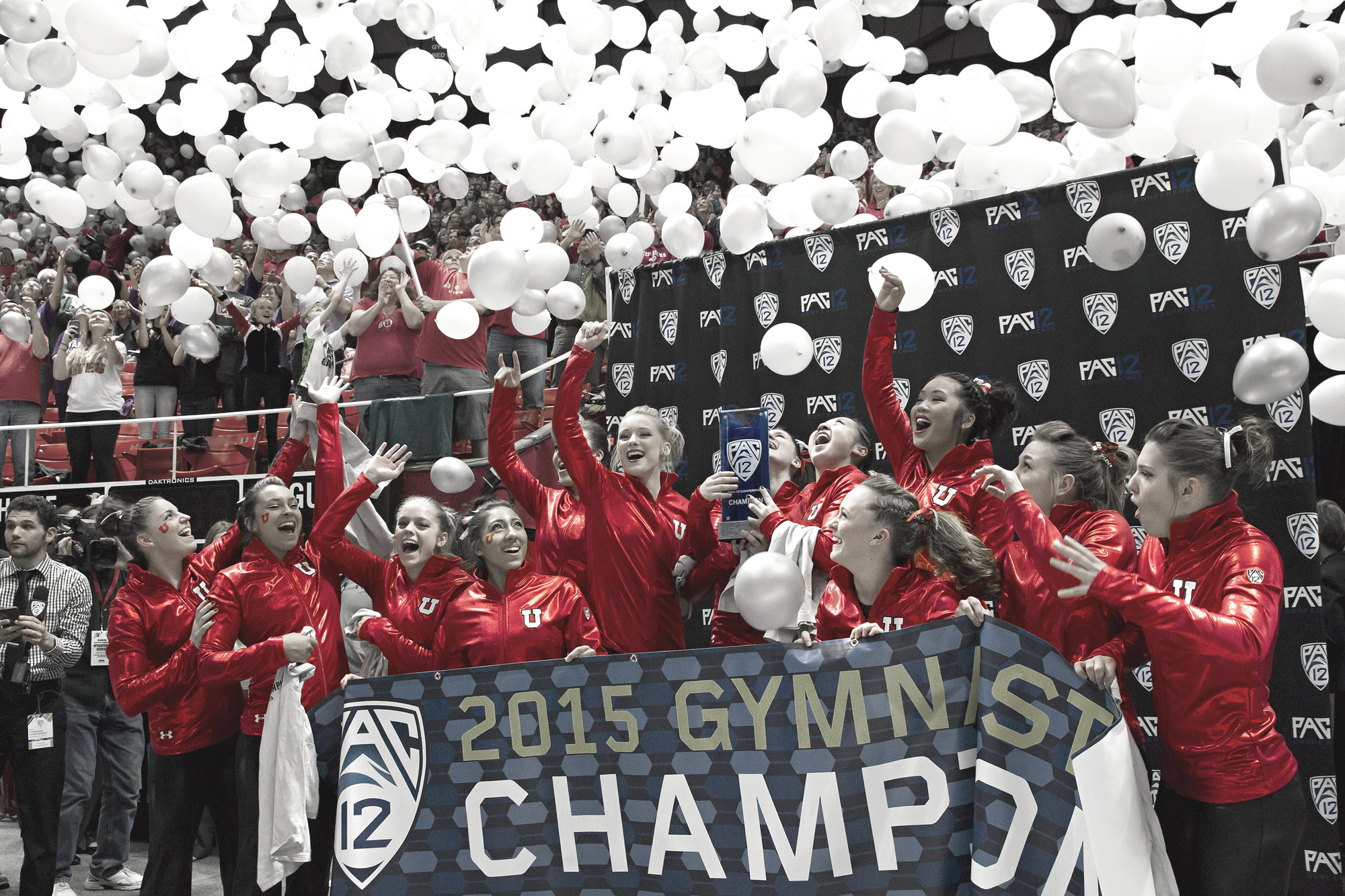 “We were this little lone school, Utah, kind of the odd one out,” says Megan Marsden BS’84, who was co-head coach with her husband, Greg ex’78, when Utah joined the Pac-12; she now shares the duties with Tom Farden. Pac-12 membership meant finally having a home where the Utes could find a worthy adversary during the regular season. “It’s made them feel more powerful at the national level because they’re part of a dynamic family,” Marsden says of her team’s inclusion in the Pac-12.

“It’s given them a chance to be part of a larger family of gymnastics schools.” Marsden, a two-time Pac-12 Coach of the Year, has led her squad to two Pac-12 championships. The Red Rocks have won 10 NCAA championships over the years, all of which have included Marsden as either a competitor or a coach. Greg Marsden was the head coach from 1976-2009 and co-head coach until 2015, when he retired.

Training and supporting student-athletes requires money. Utah’s expenditures on coaches, support staff, and athletics student aid increased from just under $20 million in the last year of MWC play to almost $32 million in fiscal 2015, an increase of more than 60 percent. But lest the average Ute fan think Pac-12 membership has boiled the U’s Athletics Department down to nothing but dollars and cents, consider the way this money supports the athletes we cheer on every season. Senior Associate Athletics Director Nona Richardson emphasizes Utah’s ability to give its student-athletes the complete support they need to be successful on the field and in the classroom as they prepare for life beyond college. 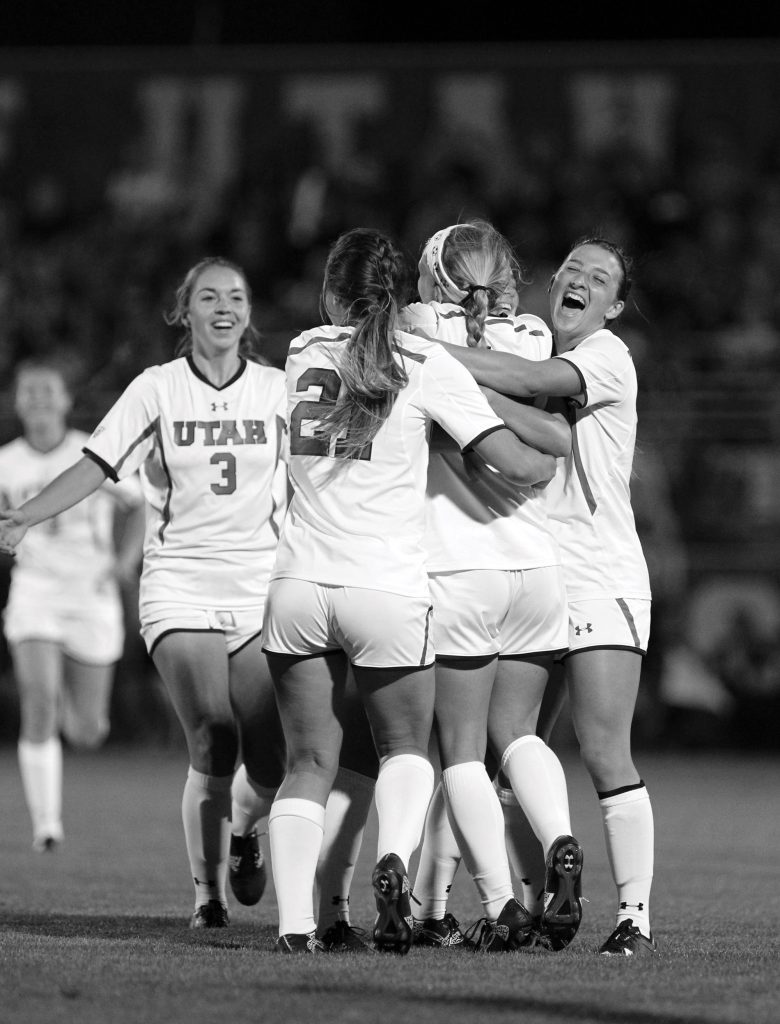 “In the past, we may not have known about the issues students may have had prior to enrolling at the U,” Richardson says. Not unlike the average student one can see walking to class or passing through the Union Building, athletes may deal with depression, anxiety, learning disabilities, and even eating disorders. “We’re able to address, assess, and assist a number of these areas,” Richardson says. Utah is now able to wrap its arms around the student-athletes who represent the university on the field of play. The results have resonated, from the softball diamond where Hannah Flippen won Pac-12 Player of the Year in 2016 to the basketball court where Delon Wright BS’15 and Jakob Poeltl ex’16 became first-round NBA draft picks in 2015 and 2016.
In recruiting, facilities, and student-athlete support, Utah is now on par with the rest of the Pac-12. And still, life in the Conference of Champions provides no rest for the weary. While Utah athletics has improved across the board, the ultimate prize—a conference championship— has eluded all but the gymnastics and baseball teams.

“The next step is really, really hard,” Hill says. “The upper part of the league changes a lot because it’s so competitive.” The Utes made the leap into the Pac-12; now they seek to take those final steps, ascending to the top of the conference even as 11 other teams fight them for every inch. In football, the task has practically assumed a Sisyphean nature. In each of the last three years, Utah has entered the final month of play either tied or alone in first place in the Pac-12 South, only to wake in late November and find the boulder has rolled back down the hill.

Unlike in a Greek tragedy, however, the Utes can impact their fate. The same formula used to propel Utah’s teams from the Pac-12 cellar to its middle and upper rungs can carry them over the top. “Keeping good coaches, that helps us recruit,” Hill says. “Then we continue to provide the facilities and the support for student-athletes that are so important.”

The results don’t come overnight. It took Hill’s administration nearly a quarter century to hoist Utah into an elite conference. And the lifting was done by every athlete and every coach who, game by game and match by match, slowly increased Utah’s profile. Now those coaches and athletes doggedly build Utah’s Pac-12 legacy. “You plan and you dream, and then you just make it happen every day,” Hill says. “Bring your lunch pail in and make it happen.”

“It takes time” women’s basketball coach Lynne Roberts says. “I tell our players, you can’t work your way to the penthouse in just one year. We’ve got to grind and take the stairs and work our way up.” For the Utes and their fans, the journey itself is worth the climb. 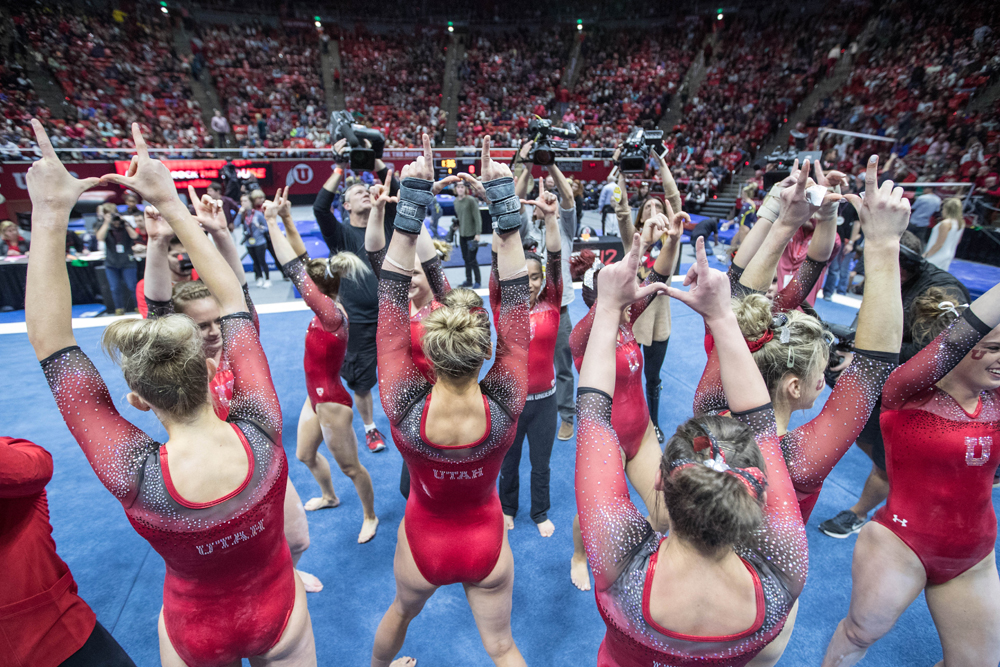 Read the related sidebar "The Long Road to Being Conference-Ready."

One thought on “Runnin’ with the Pac”