The University of Utah’s nursing college has a basement full of robots. The Simulation Learning Center’s hospital set contains expensive, lifelike dummies that help nursing students learn how to treat patients. But despite the advanced technology of the mannequins, the college knows there’s nothing better than the real thing. “We hire actors not just to be a human body to give verbal responses but to actually play a part,” says Madeline Lassche BSN’99, the college’s executive director of simulation.

Lassche explains that in the past five years, feedback from the College of Nursing’s clinical partners started to reflect a lack of interpersonal skills from recent nursing grads. So, the sim center changed its tactics. “Mannequins are great,” says Lassche. “But they don’t help students practice communication skills, bedside manner, or how to deal with mental health issues and HIPAA standards.”

Lassche also points out that although the mannequins can “talk” through microphones and speakers, there are no nuances. Facial expressions and body language can only truly come through when a human performs them. 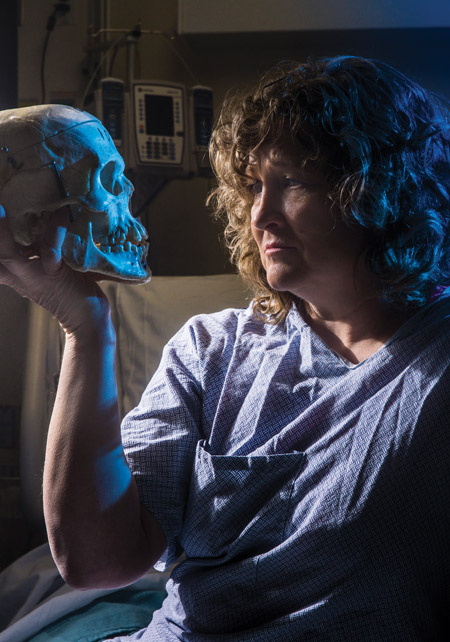 Jodee Steffensen practices her serious expression as she gets ready to perform with students.

Two such performers are Steve Fukushima BS’75 and his wife, Susan, who both work part time as standardized patients—the technical term for actors assisting medical students. Steve was hired about five years ago, and he absolutely loves the work. He spent 27 years as a writer, producer, and director for KSL News in Utah, and enjoys being on the acting side of things now. “We do what can so that when the students get into the real world, their education is truly of benefit to them,”

Fukushima says earnestly. Fukushima’s approach is decidedly service-oriented, due in large part to the fact that he’s seen firsthand how much the students learn. After a knee replacement surgery in 2016, Fukushima went to the Aspen Ridge rehab center and was treated by a nurse he had worked with in the simulation center. “She recognized me,” Fukushima says, clearly pleased. “I saw how these nurses utilize their training, and it was pretty gratifying. I found out, as a recipient of that care, that it does work.”

Among the pool of performers—which includes a range from children to retirees—are a few professional actors. After obtaining two theater degrees from the U and a varied acting career, Jodee Steffensen BFA’73 MFA’75 came full circle. “In retirement, I play around doing extra work and love my job at the U,” she says. “The people at the sim center are the nicest and best employers I’ve had the privilege to work for.”

With experience writing, acting, stage managing, and teaching, Steffensen is used to challenges. She says she loves the spontaneity of being a standardized patient. “We all try to make it as real as possible for the nurses, which means tweaking the scenes on the spot,” she explains. “No two sessions are the same. Once, I was in a scene where the students were supposed to practice communicating with a patient who couldn’t speak English. By the end of that session, I was speaking Russian!”

One of the scenarios teaches student nurses how to navigate HIPAA and state laws in accordance with revealing medical conditions to the proper people. In the simulation, a 15-year-old girl comes in who has been in a car accident and is discovered to be pregnant—but the nursing staff is not required to tell her parents.

Steffensen has played the mother in this scenario before. “The point is for students to experience handling an extremely hostile situation,” she says of the experience. “Most students find it unnerving. But one day there was a student nurse who was a master at de-escalation, and no matter what I tried, she seemed able to calm everyone down.”

The exercises can highlight natural skills—or areas that clearly need improvement—in student nurses. The actors play out a full range of scenarios from treating a type-2 diabetic suffering from depression to non-English-speaking patients to skiing accidents that require training in using crutches.

Lassche says that mental health scenarios can be especially draining, but that the discussions that follow are invaluable. “We can actually teach: ‘How are you going to isolate yourself and make sure you don’t make an error?’ ” Lassche says. “It’s really emotional for the students. They have no idea how hard it will be.”

She recognizes that it can be intense for the actors, as well. “The most challenging role I’ve had was that of a military veteran with PTSD,” says actor Rich Laniewski. “This role spanned several scenes involving changes in mood and mental attitude from one scene to the next. I always find myself emotionally drained afterwards.”

Although the students know on a cerebral level that what they’re doing isn’t real, most take it to heart and feel the emotions of a live performance. Lassche says there are always exceptions, though. “You have the student who can never do it. Never in a million years can they walk in and pretend it’s real. They just don’t have it.”

In those situations, it helps to have a standardized patient like Laniewski, who says he has to resist the urge to wisecrack. Laniewski recounts this exchange from a recent scenario, when a student seemed a little nervous:

Student: Are you sexually active?

Student: How many partners?

Laniewski: One, just my wife.

Student: Do you wear seat belts or a helmet?

Laniewski says he couldn’t stop himself from joking. “I looked at him quizzically, and said: ‘During sex?’ I have a suspicion that he’ll never forget that for the rest of his career.”

—Learn more about the new Simulation Learning Center and College of Nursing facilities in the  previous Continuum feature here.