Scan the stands of any University of Utah sporting event, and among the sea of red-clad Utah fans, you’ll be hard pressed to find someone who isn’t raising the block “U” with hands pointed toward the sky. If you ask those fans where this now worldwide symbol for the U began, you’re likely to get a variety of answers ranging from a specific football player, to any of multiple sports teams, to The MUSS.

But one story and two integral people involved with Utah Gymnastics come up again and again: Melissa Vituj and John Bircumshaw. 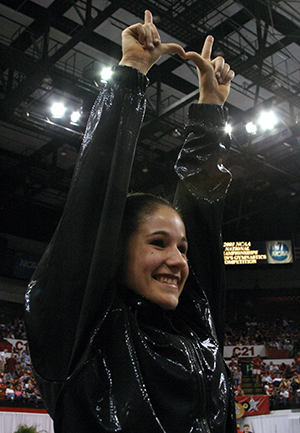 Utah gymnast Melissa Vituj flashing the “U” at the 2003 NCAA National Championships. (Photo courtesy U Athletics)

Vituj BS’05 was a first-year student at the U during the 2001 gymnastics season. Her parents lived in Michigan and couldn’t attend every gymnastics meet. So in stepped Bircumshaw, a Utah booster and Utah Gymnastics super fan who attended nearly every home and away meet (and still does). “Melissa’s father, Bill, asked me for a favor, to be there for her during the meets when he couldn’t,” Bircumshaw says. “He needed someone to represent him, and I was fortunate enough to be able to fill that role.”

Before coming to the U, Vituj said she would look for her parents in the stands during her meets and see them doing hand signals to communicate with her. She would sign back to them. “They felt connected to me down on the competition floor, just as I felt connected to them,” she says. Vituj’s father would sign “I love you” from the stands. As Bircumshaw thought about how he could show Melissa he was there to support her, he started signing “I love U”—making a block “U” with his fingers instead—and she would do it back.

“I remember back during the 2001 season, noticing that John and Melissa were exchanging this hand symbol, and I thought, ‘What is that?’ ” says Liz Abel, U senior associate athletics director and director of communications. “He explained to me that it was a ‘U’ and he and Melissa were using it to communicate with each other.”

That communication and support Vituj received made a huge impact. “I’ll never forget that feeling of standing down on the floor competing. You finish and 15,000 fans stand up and are screaming for you,” Vituj says. “And John’s there, too, giving you the ‘U’ and making you feel special, making you feel loved.”

The “U” hand signal soon became a symbol of Utah Gymnastics, and the student-athletes began using it. Before long, the signal was being flashed at other U sporting events as well. 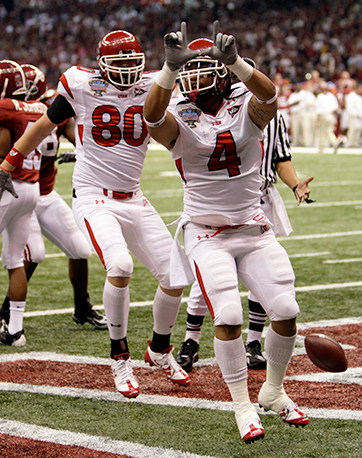 The memorable moment when Matt Asiata flashed the “U” in the end zone at the 2009 Sugar Bowl. (Photo by Jeffrey D. Allred, Deseret News)

Utah fans and student-athletes continued to flash the “U” during the years after its inception in 2001, but as John Fackler BS’89 BS’94 MprA’95, a director of alumni relations and former MUSS board adviser, remembers, it really took off after the Sugar Bowl in 2009. The game was preceded by a perfect season for Utah football, and people were paying close attention.

“Boom! That was the moment. Everyone, and I mean EV-ERY-ONE, started doing it after Matt Asiata [BS’10] flashed the ‘U’ in the end zone during the Sugar Bowl,” Fackler says.

And he recalls it also being a time that separated the U’s hand symbol from the University of Miami, which has a similar “U” hand sign. “Athletes had done it before, fans had done it before, but this was the moment that really got it out there,” he adds. “Everyone saw it, and it’s been gaining momentum ever since.”

Bircumshaw and Vituj didn’t set out to start something and see if it would catch on, Vituj notes, “but it has spread like wildfire. It’s a huge surprise and an honor to the gymnastics team for creating something special.”

In 2012, Utah Gymnastics team captain Stephanie McAllister BS’13 suggested to her teammates that they begin incorporating the block “U” hand signal into all of their floor routines. And if you’ve been to a meet lately, you’ve seen how the crowds go wild when they see the gymnasts flash the “U” with all their energy and enthusiasm.

Then you have The MUSS, the 6,000- strong Mighty Utah Student Section, showing up rain or shine to cheer on the Utes. They have been a great vehicle to spread flashing the “U” and keep the tradition going. “I knew when The MUSS picked it up, it wasn’t going away,” Abel says. “And it’s really great that we have something like this that symbolizes our school.”

It was only a matter of time before the block U hand signal went viral. “With the rising popularity of Instagram and people using ‘hashtag days,’ like #ThrowbackThursday and #TransformationTuesday, I was brainstorming ideas that would be unique for the U,” says Andrew Thompson Landerghini, U social media manager. “There was already #FlashbackFriday, which led me to think about #FlashTheUFriday.”

The tag made its debut in August 2013. By the end of that semester, U fans across the globe were using the hashtag, and Landerghini was receiving hundreds of messages on every social media platform, with photos of people from all walks of life flashing the “U” and hoping to be featured.

Scroll through the Instagram tag #FlashTheUFriday to see how far the tradition has traveled—from the Great Pyramid of Giza to the depths of the ocean in the British Virgin Islands—and almost everywhere in between. “It’s a fun way for alumni, students, and fans to stay engaged with the U, and it’s a great way for the university to build affinity among our community,” says Landerghini.

What began as a symbol of love and support 16 years ago between an athlete and a fan has now grown into a tradition unifying the U community across all sports and beyond, with fans and U supporters from around the world seen raising their fingers to the sky, showing their devotion to their team and their university.

“It’s become a real rallying cry,” Abel says. “You can pass someone on the street or in the grocery store, and you can flash the ‘U’ and everyone knows what you mean. It bonds people together.”

—Janelle Hanson is a communications specialist with University Marketing & Communications. 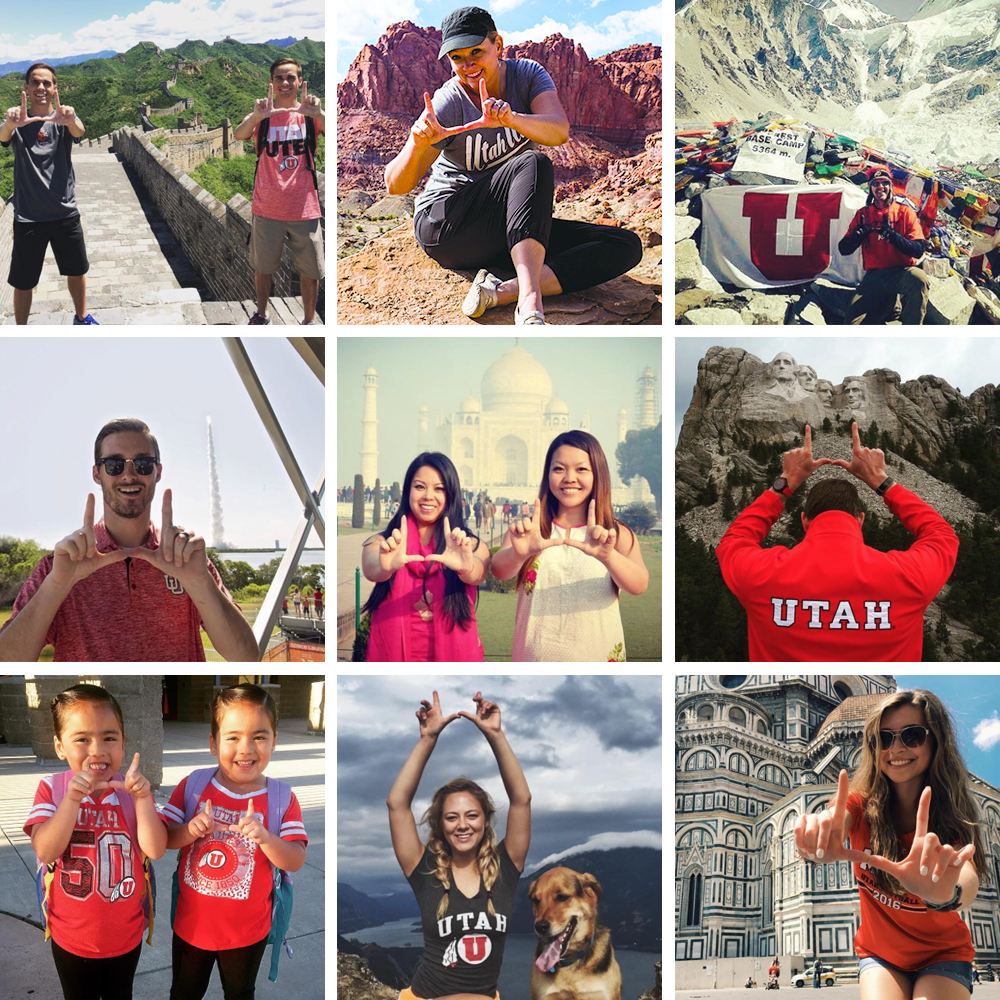 3 thoughts on “No Flash in the Pan”