In the town where Steven Just is from, college wasn’t something that he and his classmates thought much about. A Native American from the Sisseton Wahpeton Oyate Sioux Tribe, Steven grew up on the edge of the Lake Traverse Indian Reservation in Sisseton, South Dakota. And although he doesn’t like to talk about it much, he’ll tersely explain that he hated his high school experience and was discouraged with his education at a young age.

“For me, the K-12 system I knew felt like it was getting people ready to work in a factory or go to prison,” he says bluntly. 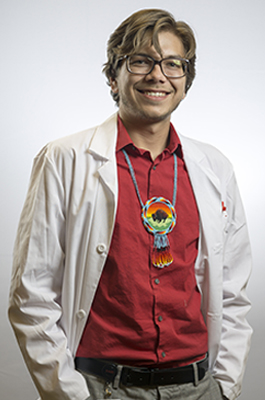 “I saw the health care that my family and I received at the Indian Health Services growing up,” says Steven Just. “Being involved in NARI really impressed upon me that I could become a health professional and very likely return to the IHS and try to improve it.”

Steven, 27, looks back on that time in his life with a sober understanding that if it hadn’t been for counselors, family, and tribal members who pushed him to go to college, that vision of high school—as a pipeline to drudgery or worse—might have caught him.

“Back then, I was the night manager of the local grocery store, and where I grew up, that was a big achievement,” he says. “I never could have imagined the person I am now—a mentor to fellow Native American students, a college graduate. I’m about to start pharmacy school.”

Steven credits a unique University of Utah program for helping solidify his passion for science and medicine. The Native American Research Internship (NARI) is a 10-week program that specializes in guiding Native American students toward careers in those fields. It is designed specifically for Native American undergraduate students with aptitude and interest in science. The paid summer internship (open to any college undergrad) gives students like Steven both lab and clinical experience that is guided by a strong focus on cultural understanding.

“[Native Americans] are the least represented group in the study of science and medicine in the nation,” says NARI program founder Carrie Byington. “They have had historical hardships that have created barriers for them to enter into the scientific disciplines and other professions.”

Steven’s experience in his early education is an unfortunately familiar narrative for many Native American students. High dropout rates, incarceration rates, substance abuse, and poverty create a stacked deck for standouts like Steven. Among underrepresented populations in higher education, Native Americans are at the bottom of the list, with total college enrollment across the country annually hovering at or below one percent. And, in the sciences and medicine, those numbers essentially fall off the chart. Native Americans comprise only 0.6 percent of scientists (according to a 2010 National Science Foundation report) and 0.5 percent of physicians (per an Association of American Medical Colleges report that same year, the most recent for which numbers are available). 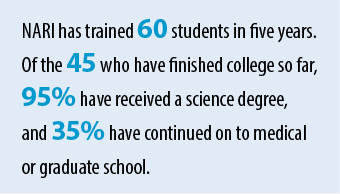 “NARI helped focus my career choices,” says Steven, who spent two summers in the NARI program and is currently the program’s student coordinator until he leaves for pharmacy school in Minnesota this fall. “I was struggling a bit in college at first, but my first summer with NARI reinvigorated me. When I returned [to the University of Minnesota, Morris] in the fall, I felt like I had a lot more support and people who believed in me.”

But it is interesting to note that creating a successful and groundbreaking, culturally specific mentoring program to improve those numbers grew out of Byington’s attempt to understand what appeared to be an entirely different problem: low participation among Native Americans in research studies.

Byington is an M.D. and a pediatrics researcher, but she also studies concepts of community and how building community-based experiences into education can improve student and faculty success. In 2009, she and her colleagues were looking for inroads into the various tribal communities in the intermountain region and trying to understand the cultural barriers that made studying medical maladies within the Native American population difficult. So, they gathered tribal leaders from the area together that year to ask them what they thought were the reasons behind the low participation in potentially beneficial studies. 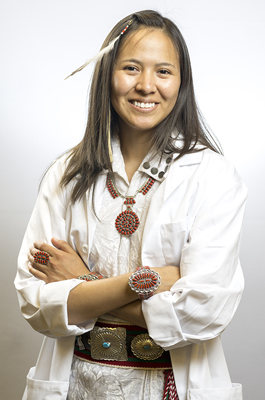 “Having cultural mentors with the same background as me really helped my career path.,” says Cynthia Wilson. “And staying close to my research mentor helped me get to where I am today.”

The “but” was a complicated question of trust. The long history of conflict and strife between the United States government and the Native American peoples has left a lot of scars and a distinct lack of trust among American Indians for white institutions, especially in the realm of health care, which is often administered by the underfunded federal Indian Health Service. The solution, the elders suggested, was to train the young Native Americans and encourage them to return to their tribes and hometowns as researchers and health care professionals.

“Basically, they wanted us to reach out to their young people and teach them,” Byington says. “The elders wanted a mentoring program that reflected the native culture, a place where native students could feel proud of their culture and feel that the things they were bringing from their native culture would be welcome.”

And although this request from the elders wasn’t the answer they had thought they were seeking, she and her colleagues were undeterred.

“Certainly, it was the long way to achieve our goal, but we in the academic community are often surprised by the answers we find. It just demonstrates that we have to be out in the community, actively engaging and talking with people to learn what they want and how we can work together.”

The world of white lab coats and competitive and rigorous course work alongside culturally advantaged students is a long way from the life that many NARI students grew up in. Many Native Americans come from a tribal way of life that emphasizes the good of the tribe over individual success. Native American students can struggle with the individualism and competitiveness that permeates the biomedical disciplines.

“These students often haven’t been in a population where the other students are go-getters,” says NARI Program Director Maija Holsti. “We help them by giving them lots of ‘Yes, you can do this.’ There are so many things like public speaking or making a poster for a presentation that are petrifying for them. They just haven’t been exposed to these things, but we walk them through these little hurdles.” 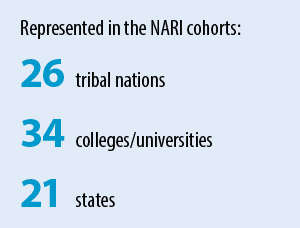 Each NARI student is assigned a research mentor and a cultural mentor. The research mentor guides them through the essentials of lab work and research protocols, while their cultural mentor is a Native American professional working in a science or medical field. The program has a suite of research projects, funded by National Institutes of Health grants, that students are placed into. Holsti says they try to get students onto projects that match their interests. Some are clinical and involve interacting with patients, while others are pure lab work, basic science, and data collection.

On the cultural side, students attend weekly “talking circles” that are the hallmark of the program’s high-touch approach. At the meetings, students practice presentations, share their experiences and challenges, and generally compare notes and talk through issues with peers who come from similar backgrounds. The program takes on a close-knit family feel, and the students usually keep in close touch even after the program ends.

“They become a family,” Holsti says. “Two of our students even got married, and we see lasting friendships develop.” 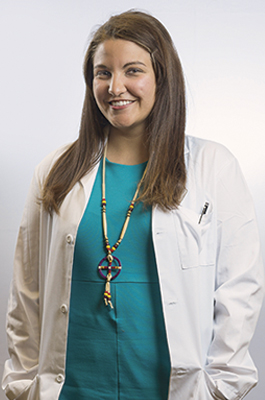 “Coming from a small town and a small school, I didn’t know that research was a career option for me. NARI opened that door,” says Kali Dale.

“We planned activities for elementary students that focused on the importance of physical activity and healthy eating,” says NARI alum and former NARI program coordinator Sam Hawkins. “So we got these kids and had them do jumping jacks, and then had them repeat it breathing through a small straw to demonstrate how smoking affects their bodies,” explains Sam, who received his bachelor’s degree from Utah State University and is now a first-year medical school student at the U. “This one little boy, 8 or 9 years old, was like ‘Wow, that was hard, I’ll never smoke.’ It really struck me how much of a difference we can make even on a small scale.”

This concept of giving back and sharing runs through the program. Many of the students are planning for careers where they can return to their tribes and hometowns and work in the Native American community. For example, NARI alum Kali Dale (who graduated with her bachelor’s degree from UM Morris) is now in a doctoral biochemistry program at the U and wants to focus her work on diabetes, which disproportionately affects Native Americans. “I want to help my people by researching the diseases that we are more likely to have,” she says. And Cynthia Wilson, another past NARI student who received her bachelor’s degree from Southern Utah University, is now in grad school at the U studying nutrition. Her master’s project is creating nutrition education curriculum that comes from her own perspective as a Navajo. 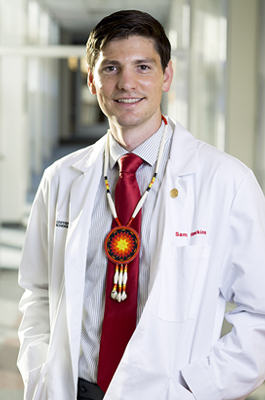 “There’s a special bond among us NARI students,” says Sam Hawkins. “Not many Indians go into this type of career, and so I know I’m going to know them for the rest of my life. It’s like a family.”

“I grew up on the Navajo reservation,” Cynthia says. “I came from a big family, and there is a lot of diabetes. We were never exposed to any kind of nutritional education. I didn’t even know what supplements were. We need better health care back home, and NARI really helped me figure out how to build a career in health.”

Sam is planning to be a primary care physician so he can work with underserved Native American communities. “We’re all shooting for the same thing,” he says, “a career in the biomedical sciences so we can go back into our communities and help.”

In many ways, the program is especially suited for the University of Utah.

“I feel like we as a university have an obligation to these students,” Byington says. “We live in a western state with a large Native American population, and we use the name of the Utes as part of our identity. We really need to be serving Native American students, and the NARI program lets us do that.”

—Jeremy Pugh is a former editor of Salt Lake magazine and a freelance writer living in Salt Lake City.