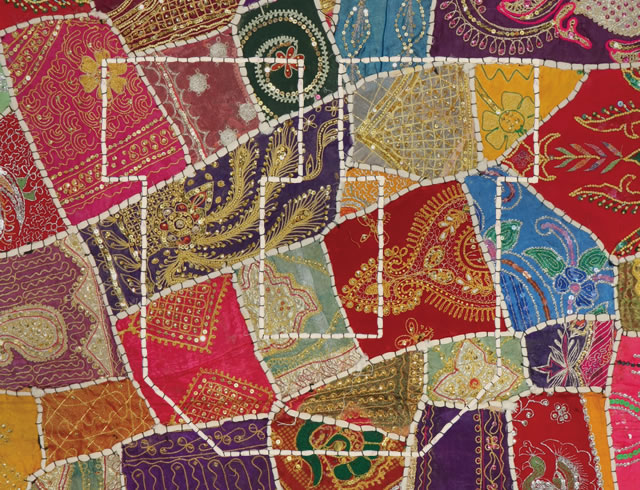 UNP/Hartland works to weave the diverse cultures of Salt Lake City into the University fabric.

~ We all know the image of Ivory Towers—universities as places of esoteric knowledge, havens for the elite, separated from the real-world affairs of ordinary people.But we also know our society itself isn’t like that. It’s increasingly nonhomogenous. It’s multicultural. It’s wonderfully messy—a cacophonic parade of colors and cultures.

To remain engaged in educating future leaders and building knowledge, universities must change in the same ways that our society is changing, including differing voices and experiences that have been absent in the past, making room for the knowledge and talent that diverse populations bring.

But trying to integrate diverse human beings into a rigid university framework will never be as successful as transforming the institution’s traditional structures into a more open, global web made up of individual talents and multicultural knowledge. It is no longer a “square peg/round hole” problem. It’s more of a “myriad threads in a single tapestry” issue.

Earlier in this decade, the University of Utah became aware that its tapestry was marred by a hole in the fabric. Two Salt Lake City ZIP codes comprising seven west-side neighborhoods were clearly underrepresented at the U. Historically working-class and ethnically diverse, these neighborhoods are home to more than a third of Salt Lake City’s population, including 70 percent of the city’s Latino community. Eighty percent of Salt Lake City’s growing populations of refugee background also live there, alongside longtime residents as well as recent immigrants from Latin America, the Middle East, Africa, and Asia. A year of interviews with residents and community leaders revealed that increasing enrollment from these ZIP codes wasn’t just a matter of helping residents get into the U of U. It went deeper. Much deeper. 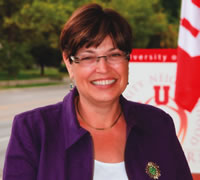 That’s a significant loss that society can ill afford, considering what some of  those people’s talents, experiences, professions, and knowledge may have been in their former countries, not to mention what they could become here.In 2002, the University Neighborhood Partners program began connecting the University’s resources to the city’s west-side residents in a new sort of collaboration. “It’s important to build on the capacity and existing goals of the communities and organizations here,” Hunter says. “That’s where the University’s resources—in terms of information, people power, and money—all come to bear.” UNP brings faculty and students from various University colleges— such as Humanities, Education, Social Work, Law, Science, Health Sciences, and Nursing—to the table with community residents, organizations, and schools to share knowledge in both directions. “It’s investing in the community instead of operating a program or project, so that the community and the University can both grow to their full potential.”

That distinction between investing in the community versus operating a project is important.

“There was a lot of input from the community early on that sometimes in the past the University would come in, do a sort of short-term outreach program, and then leave. But the community would still be here,” notes Hunter. Through UNP, the University of Utah set out to change its profile from a remote presence on the eastern foothills to a partner in community-building on the west side.

That meant, in part, becoming a west-side resident. So the U moved in. A city-donated house next to Jordan Park became UNP’s main offices, its basement renovated into a meeting space for community organizations such as a Girl Scout troop, a library planning committee, and the organizers of Jordan Park’s weekly People’s Market.

Another important UNP presence is the 300-unit apartment complex now called The Seasons at Pebble Creek, though many still refer to the complex by its original name, Hartland, as does the UNP project based there. For six years, housed in a donated apartment, UNP has facilitated partnerships operating programs for residents and the surrounding community. This year, the University is purchasing a 10,000-square-foot building adjacent to the complex so that the work UNP/Hartland does can grow in a dedicated space. From these two offices, UNP manages 33 partnerships in 25 community locations.

But why is it important for the University of Utah to embed itself in this community?

“The goal of this was not just to impact the west side, but to change the structure of the University and how it works, so that across the institution we begin thinking about how we tie teaching and research to the communities where we live,” says Hunter. If the communities in which our graduates will live and work are increasingly multicultural, then the education we provide them must be more multicultural, too, or we’re sending them out underprepared, she asserts. Not everyone learns, thinks, or navigates society the same way; different cultures bring different strengths and knowledge to the same situations. According to Hunter, the University of Utah is vitally interested in tapping into those strengths and that knowledge.

COMMUNITY RESIDENT IN ACTION: BRINGING THE COMMUNITY TO THE TABLE

To forge stronger partnerships, UNP sought out community residents who were already considered formal or informal leaders. “Community partners and residents were saying, ‘We don’t particularly want the University to come here and lead us. We actually have our own leaders. What they need are more opportunity, more access, and the skills to know how to negotiate the formal systems,’ ” explains Hunter. The city is rife with agencies chartered to serve immigrants, non-English speakers, and populations of refugee background. But learning how to find and use those agencies can be a significant hurdle in itself. By training community leaders to navigate those systems, UNP partnerships have watched the knowledge ripple successfully out into the community. 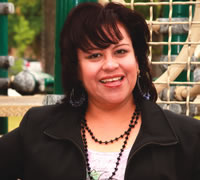 Maria Lourdes Barajas is one such community leader. A mother of four, Barajas became interested in UNP’s work encouraging young students to plan for their futures and consider college. With her oldest daughter at West High School, Barajas has been selected as a UNP Community Resident in Action. Her role? To introduce other West High students and parents to the University’s Leap to the U program, which helps students prepare for the University experience.

“Some parents are very difficult to work with because they work and they have other things to do, but also because they’re not aware of the opportunities they’re letting pass by,” Barajas explains in Spanish. “Once they become aware, they become more involved.”

UNP’s influence reaches not just the individual, but also a network of family members, who in turn network to more friends and families, spreading the word. This helps school administrators and teachers, who struggle to find paths through cultural barriers.

Another element critical to UNP’s vision is understanding that these communities have an incredible amount of existing talent and leadership. “What’s key is that we create space, we create access, we make connections, we create opportunities, we share resources. But the knowledge and the potential—that already exists,” says Hunter.Community leaders like Barajas are the direct line into that knowledge and potential.

COMMUNITY SCHOLAR IN RESIDENCE:BRINGING THE U TO THE TABLE

A flyer on the bulletin board outside UNP’s Hartland office advertises partnership programs such as Head Start preschool, life skills classes, health clinics, job search assistance, English classes, citizenship programs, youth sports and educational programs, college planning, and a Youth Center where kids can go for everything from homework help to a boys’ poetry slam. The flyer is repeated in English, Spanish, Russian, and Somali, with pictures for residents who can’t read those languages. There isn’t room on the bulletin board for versions in Arabic, Karen, Kirundi, or any of the other 15 languages spoken here. A steady stream of residents find their way to the UNP/Hartland’s offices every day to ask for help with résumés, child health care, or English, or to teach and work at the centers.

With community leaders, UNP performs ongoing community assessments to identify priorities. Then UNP finds departments at the University to partner with residents and community organizations to address those needs. 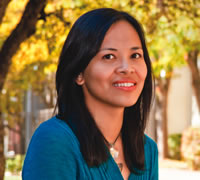 TrinhMai, special assistant to the dean on Community-Based Research in the College of Social Work

Trinh Mai, special assistant to the dean on Community-Based Research in the College of Social Work, received a UNP Community Scholar in Residence faculty award this year to recognize and support her work at Hartland. Her project is only one example of University of Utah scholars participating in community-engaged scholarship.

The project, called “Voices of New Americans: Bridging the Cultural Gap between Schools & Communities,” includes the 12-member Hartland Resident Committee and Rai Farelly, a Department of Linguistics doctoral candidate. Mai explains that although community residents “are very interested in learning about the cultures here and how systems work here, they also have a lot to teach. Institutions here in areas such as education, criminal justice, health, and social services could benefit immensely from residents’ and leaders’ backgrounds, knowledge, and experience.” She adds, “Often in cultural trainings or diversity trainings, the communities the presenters are talking about are not represented. They are being talked about instead of talked with.”

To address this, the resident leaders, Farelly, and Mai give cultural presentations to teachers and administrators, promoting dialogue on how to bridge cultural differences and make schools more culturally relevant. Mai and her partners also study cultural issues impacting education, seeking effective ways that communities and schools can collaborate to address these issues.

Mai, who was 9 when her family was sponsored out of Vietnam, also co-teaches a class derived from UNP’s work at Hartland, called “Immigration and Resettlement.” She says the class “aims to bring community and interdisciplinary knowledge that came from our partnership work into the University setting.” Mai co-teaches the course with Yda Smith from the Division of Occupational Therapy, and with Juan Lopez, a teaching assistant who is also a resident leader working in the Hartland Partnership.

Lopez isn’t the only Hartland resident who’s reached the University of Utah. Pausing before a collage of photos in UNP’s Hartland offices, Mai ticks off face after face, describing the undergraduate and graduate programs a growing number of residents are enrolled in. Then there are the names of individuals she rattles off who’ve gone on to head up or participate in their own community and youth organizations. Some have joined the very agencies they once came to UNP to learn about, effecting the changes they could see were necessary and reaching more people in their community.

UNP positions itself as a bridge of partnerships between the University and the city’s west-side neighborhoods. Through UNP partnerships and the efforts of students and professors such as Mai, the University helps the community strengthen itself through education and skills training, with an eye toward encouraging higher education to ultimately benefit the community even more. The community, through neighborhood organizations and resident leaders like Barajas, helps the University by integrating professors and students into a rich research and practical environment of knowledge and background, helping the U shape more effective curricula and support systems—and making campus more inclusive and diversified.

And as the U adapts its curricula and systems, its graduates will carry that knowledge back into the community and create additional change there, too. Says Hunter, “We see it having remarkable impact.”

One thought on “Mending the Tapestry”