Before we talk about flying robots, we need to talk about food. It is 1977, and four-year-old Kam Leang is living with his family in southern Cambodia, forced out of the city and into the countryside by the Khmer Rouge. His father is often taken away to do something he doesn’t want to talk about when he gets home. And there is never enough to eat. His father fashions a mousetrap out of wire and wood, and every night he sets it. “I remember at two or three in the morning it going off,” Leang says. “And my brother and I were so excited.”  This was not about rodent control.

Leang at a refugee camp in Thailand in 1979

Leang wonders now, nearly four decades later, if his early years had a bearing on his later career. He offers this theory: Perhaps, he says, being hungry all the time created an insatiable drive to always want more. Not more food or more stuff, but more projects and challenges and ideas. More problems to solve.

Leang is now a professor of mechanical engineering at the University of Utah, and founder and director of the U’s DARC Lab. The initials stand for design, automation, robotics, and control, and Leang is passionate about all of them. He loves the idea of pushing a button and having a machine figure out what to do next. A better mousetrap, as it were; a mousetrap that seems to think for itself.

Which brings us now to flying robots, also known as unmanned aerial vehicles, but more popularly known as drones.

Drones raise a host of ethical and existential questions (including “Does our species really need Amazon to deliver us a package in 30 minutes?”). But drones also pose huge safety concerns, including how to keep them from colliding with airplanes and buildings and each other.

Humans can generally figure out how not to bump into things, as can dogs and fish, but getting a machine to figure it out is a lot harder. And that makes it just the kind of problem Leang likes to tackle with his graduate students.

Leang with his siblings during their youth

One afternoon last fall, to demonstrate some of the work Leang’s team is doing, doctoral student Xiang He launched a small, autonomous (that is to say, not remote-controlled) drone into the 8-by-8-by-8-foot netted cage in the DARC Lab. The copter hovered for a few seconds, as if it were contemplating what to do, and then began flying around the cage, buzzing as it went. Through multiple repetitions, He was trying to teach the drone how to make a perfect circle. “The precision is not as high as I’d like it to be,” Leang said as the drone did wobbly rotations around the cage. “We’re in the process of figuring  out why.”

Leang was a junior in mechanical engineering at the U in the 1990s when he made his own first rudimentary robot in Professor Sandy Meek’s mechatronics class. “I was sitting in the back of the class,” Leang remembers, “and he said ‘You guys are going to build a robot,’ and I thought, ‘I should drop this class right now.’ ” 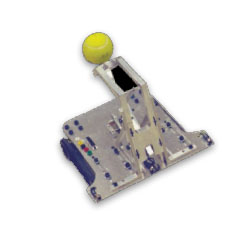 The assignment: build a small robot that can shoot a ball into a short basket equipped with a light bulb. Like other teams of students, Leang’s used light sensors to determine the location of the basket and figure out the angle of the throw, but his team designed a speedy robot that could get to the throw line first. His team won, and he suddenly knew what he wanted to do for the rest of his life.

Despite the fact that the “R” in DARC stands for robotics, however, Leang says he’s not a roboticist. “I’m the first to admit that. My expertise is control systems.”

Think of controls as the intelligence of a machine, the part that can regulate and manipulate all the variables that come its way. A thermostat is a kind of control system, albeit a very simple one with just one task: to figure out how to keep a room at a constant temperature. For a drone or a robotic arm, the control system is much more complicated: determining how to move itself or something else up and down and around, how to react to its surroundings, how to stay focused.

Leang went on to get a master’s degree in mechanical engineering at the U in 1999, and then a doctorate at the University of Washington in 2004, working under former U professor Santosh Devasia. His doctoral work focused on control systems at the nano level, at sizes as small as atoms, not much bigger than a billionth of a meter.

Most of his work since graduating has been in nanopositioning, designing control systems that, for example, can move a probe or a tool with speed and precision onto areas that are so small they can’t be seen with a normal microscope. Along with graduate student William Nagel, Leang is currently collabo-rating with Boston University and startup company Molecular Vista Inc. to design a system with tiny probes that will be able to detect the stiffness of living cells, or “feel” a DNA strand.

Leang knows that his listeners’ eyes can glaze over when he uses terms like “nanopositioning.“ So he sometimes likens this work to being a crane operator. “That’s basically what I do, but on a different scale.”

In Cambodia, Leang’s father ran a small family-owned convenience store in Battambang, which meant the family was engaged in the free-market economy. And, too, the family is ethnic Chinese—so they had two strikes against them in the eyes of the Khmer Rouge when Pol Pot took over Cambodia in 1975 and began a systematic genocide of what would eventually amount to more than a million people; another million are estimated to have died from starvation. Leang’s family was forced to leave Battambang and relocate to a small straw house in the countryside. 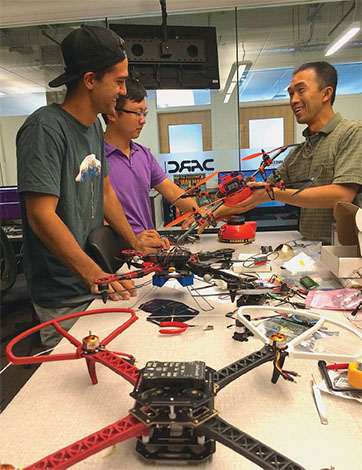 A memory: One day, his father and uncle find a light bulb and battery, and they wire it up to provide light after sundown; then a neighbor must have snitched on them, because soon, Khmer Rouge soldiers show up and make his parents get down on their knees at gunpoint. Leang remembers them begging for their lives, and he remembers himself screaming in terror.

Another memory: The family is walking toward the border of Thailand, fleeing Cambodia after Vietnam invaded in 1979. He is hungry and thirsty, and at some point, in an area where there are land mines, his father and uncle find a steel bowl and some muddy water tainted with blood. Leang still remembers the taste of that water.

After being in a refugee camp in Thailand for several months, the family’s name was drawn in the weekly lottery for a chance to emigrate to America. They were sponsored by the Don and Carl Borup families of Tremonton, and at first, Kam and his brother, sister, and mother lived in Don’s basement. (Their father had to stay behind for several months with their aunt, who was recovering from tuberculosis). At night, little Kam and his brother would sneak upstairs to raid the pantry and then hide the food under their beds. At school, where the brothers didn’t understand what anybody said, Kam frequently got “frowny faces” on his writing assignments.

As he grew up, Leang watched his father be resourceful: building furniture from scraps of wood, fashioning a fishing reel out of a soda can and some string. Soon he too was making things: rubber band shooters, bows and arrows, intricate origami. He customized the handlebars of his bike by cutting off the ends. He took the whole bike apart just to see how it worked. 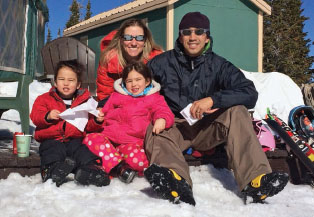 Leang, an avid skier, on a recent ski vacation with his family.

In high school—by then the family had moved to California—he took trigonometry but spent most of the time sitting in the back of the room programming his calculator for poker and electronic Battleship. After high school, he enrolled in a junior college, intending to study art.

And then one day he went to see the academic counselor, and she said “Have you thought about engineering?” and he said “I don’t really know what that is.” The next semester, he enrolled in math and physics classes, and after two years of course work, he transferred to the University of Utah to study mechanical engineering. At least that’s the reason he told his parents, although it was skiing that lured him back to Utah. That first year at the U, he skied more than 100 days.

He still loves to ski, and he makes his own skis in his garage. Up until the time he and his wife, Allyson, had their third child this past summer, he skied at least once a month, year-round, for 141 straight months. His definition of skiing: “making at least a couple of turns with skis strapped to my feet, be it on snow, dirt, sand, rocks, or whatever slides.” As he explained on a website called turns-all-year.com, when asked what his worst ski trip was: “None that I can recall. They have all been fun, even in the rain.”

Leang and his students are working on several drone projects, including one nicknamed the “flying nose” (official name: Autonomous Broad Spectrum Environmental Sentinel), a joint project between the U’s DARC Lab and Nevada Nanotech Systems Inc.

Nevada Nanotech is providing sensors that can detect chemicals in the air, and Leang’s lab is designing the autonomous aerial robot that can carry the sensors. The ultimate goal is to create a swarm of machines that can work together to find, say, bioterrorist toxins, and monitor how far an invisible plume has traveled. 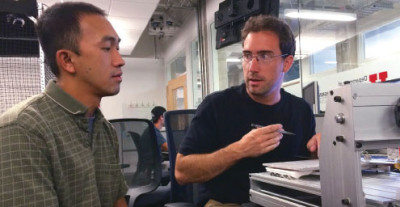 The project has been awarded a $1 million grant from the U.S. Army to develop Phase II. The lab is also utilizing an $800,000 grant from the National Science Foundation to develop ground and aerial robots that can be used as first responders in disasters. And the team is using a recently funded $3.8 million NSF grant to develop 3-D printing technology, spearheaded by doctoral student Jim Carrico, that can print robots from soft materials.

Leang is “very aggressive about seeking funding,” notes Professor Tim Ameel, chair of the Department of Mechanical Engineering. This, along with Leang’s energy, enthusiasm, and past projects, made him the top candidate in the U’s hiring search in 2014, Ameel says, when the department sought to strengthen its robotics program. Leang left a similar but smaller program at the University of Nevada Reno.

The DARC Lab is just one of nearly a dozen robotics-related labs at the U that are working on everything from robot vacuum cleaners to virtual reality. The labs each have their own projects and lab spaces, but they also share a large space—the Utah Robotics Center—that currently houses a self-driving car, two robotic torsos, and a 25-by-25-by-25-foot netted cage where Leang’s graduate students can further test their drones.

Like the drones themselves, Leang is a man in motion, scurrying from one task to the next, as if always hungering for more.

“Every day,” he says, “I think of something new that I’d like to try.”

—Elaine Jarvik is a Salt Lake City-based freelance writer and playwright and a frequent contributor to Continuum.

One thought on “Man in Motion”