In the early 1980s, J.W. “Bill” Marriott, Jr., BA’54, then president of the hotel corporation bearing his family name, sat at his desk stressing over the biggest business decision of his life: build a $500 million hotel in Times Square, or walk away from the deal. Times Square was then in a crime-ridden, dicey neighborhood in New York, known more for its drug culture and pornographic theaters than as a prime location for a high-end hotel. But Marriott knew there was a chance that the area could turn around, especially if the company planted the first seeds of redevelopment.

It was the last day to vote yea or nay on the project: If he didn’t agree to purchase the land that afternoon, the price would go up, and as Marriott’s phone lines blinked with associates on hold—including the mayor’s office wanting to know whether to schedule a news conference on the project—Marriott received another call. It was his father, J. Willard Marriott, who had started the company back in the late 1920s.

“When are you going to put AstroTurf on the balconies of the Twin Bridges Hotel?” his father demanded. The senior Marriott had a well-documented love for the fake grass. But rather than becoming impatient or angry with his father, Bill was relieved. The call, for all of its absurdity at that moment, put everything in perspective. He realized that risk could not always be calculated and quantified, like buying AstroTurf in bulk. Sometimes, you jump.

Marriott made up his mind then and there to go forward with the Times Square property—and the New York Marriott Marquis is now one of the company’s most prized lodgings.

Bill Marriott recounts the AstroTurf story as an example of managing risk in his book Without Reservations: How A Family Root Beer Stand Grew Into A Global Hotel Company, published in December 2012. “Don’t just kick the can down the road,” he writes. “My father hated making decisions, for fear that some better option was just around the corner or the risk was too great. I don’t suffer from the same kind of indecisiveness that plagued my dad. In fact, I’m sometimes accused—with some justification— of being very impatient about making decisions. I’d rather make a decision and get on with it.” 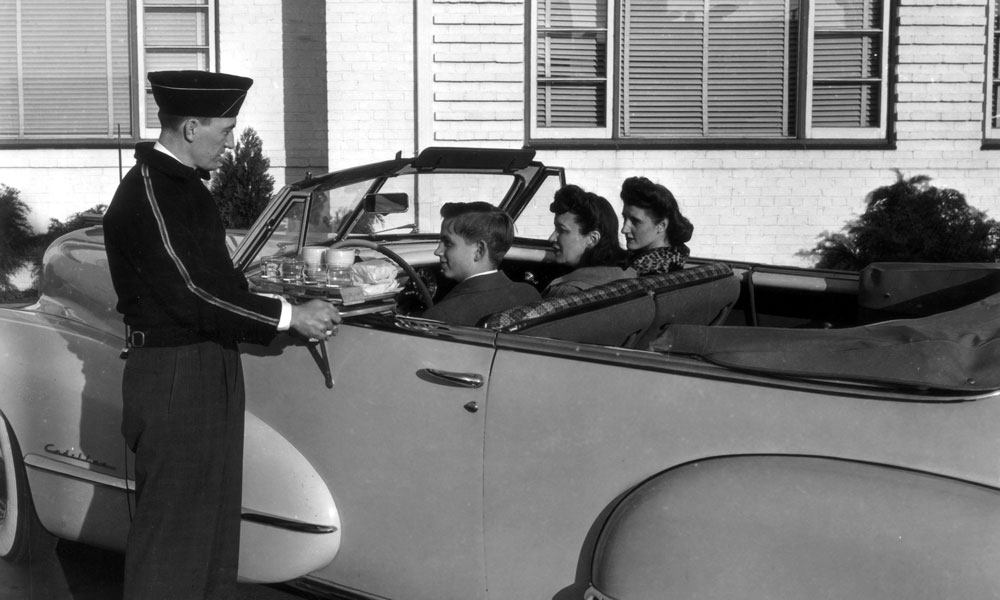 Marriott’s book is in some ways a homage to his father and mentor—who died in 1985—and an outline of his own business principles, gleaned from a half-century in the hotel and lodging business. Under Bill Marriott’s leadership, the company has grown into an empire of more than 3,000 properties spanning the globe, with revenues north of $12 billion a year.

Marriott says he wrote the book both for himself and for business leaders. He had previously published one other book, The Spirit to Serve: Marriott’s Way, in 1997, and it was an earlier attempt to pin down his business philosophy and his biography. “It’s been 16 years since I wrote a book, and I decided it was time to write down a few things I’ve learned about leadership and team building, and to help me grow as a businessman, too.”

Without Reservations tackles each of Marriott’s (the man and the company—the two are, at this point, inseparable) core values: Put people first; pursue excellence; embrace change; act with integrity; and serve our world. Every Marriott employee memorizes these values and is expected to live by them. Of these, “put people first” is the linchpin that holds everything together. As Marriott notes in his book, that’s not necessarily earth shattering. Companies the world over claim to put people first. But Marriott believes that the connection between employer and employee is everything. “An organization’s culture is not a small matter,” he writes. A strong internal culture means lower turnover among employees, higher marks from satisfied customers—and happier shareholders. 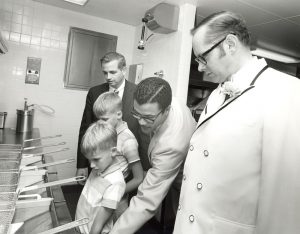 Bill Marriott, top left, works with his two young sons and a couple of employees in a company kitchen during the 1970s.

Marriott culled many of his ideas for ethical and proper business practice from his father, as well as from his own experiences while working in the family business. His first job was stapling invoices together for the accounting department at age 14. Back then, the company wasn’t in the lodging industry, but rather operated a string of A&W Root Beer stands that also served food, called The Hot Shoppes. In high school, Marriott began cooking burgers in the Washington, D.C.- area Hot Shoppes and later moved on to sling hash while attending the University of Utah.

“While I was still working at the Hot Shoppes in Salt Lake City during college,” he writes, “I discovered that I thrived on the fast pace of the business. Teamwork was essential. When the noontime crowd poured in, everybody had to be at their command post and ready to go. If you didn’t dish the food fast enough or if people weren’t out on the floor taking care of customers, you would have a disaster on your hands.”

Marriott credits his time at the University—and his days standing behind the grill at the Salt Lake City Hot Shoppe—with helping him learn the fundamentals of business. “I didn’t know much about business before going to the U,” he says. “I did work with my parents’ business and went to a prep school—most of that was learning basics, not anything that could be applied to business. But I really enjoyed my finance classes at the U, and by being exposed to the things I learned at school as well as the hands-on work at the Hot Shoppe, I had a pretty solid foundation when I graduated in ’54.”

Although Marriott loved the restaurant business, he didn’t discover his true calling until the late 1950s, when the company built its first hotel, the Twin Bridges, just south of Washington, D.C. In 1957, he took over management of the new lodging division. “My dad had loved the restaurant business, but I loved hotels,” he writes. “Planning them. Building them. Seeing them fill up with people.” In 1964, he became president of the company, at age 32.

Without Reservations certainly dispenses some time-tested advice—for example, Marriott stresses the need for today’s executives to be hands-on managers. This is not some kind of hypocritical edict: At one time, Marriott easily racked up 70,000 air miles a year visiting his hotels and those of his competitors. He didn’t spend much time behind a desk and urges today’s businessmen to spend more time “in the field,” learning how things work from the ground up.

But rather than coming across like a stale collection of passé do’s and don’ts for young MBAs, the real strength of Without Reservations lies in Marriott’s ability to illustrate his point with very personal, sometimes cautionary tales from his own life. He may be urging businessmen to work harder and smarter, but he’s got a caveat about that, too, based on his own grueling work schedule. 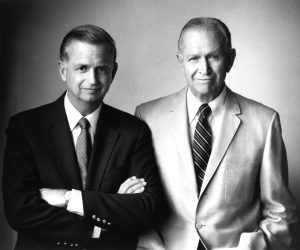 Bill Marriott, left, and his father and mentor, J. Willard Marriott, in 1972.

In 1989, he boarded an Amtrak train in Washington, D.C., for a trip to New York. After settling into his seat, the unease and discomfort he’d been feeling all morning began to intensify. He promptly disembarked from the train, hopped back into his car, and told his driver to take him to the hospital. He suffered three heart attacks before undergoing coronary bypass surgery. In all, he was out for some six months.

The experience convinced him that it was time to slow down. He began to cut back on the amount of time he spent on the road, and in December 2011, he announced that he would step down as chief executive officer, naming Arne Sorenson as his successor. Bill Marriott, left, and his father and mentor, J. Willard Marriott, in 1972. Sorenson assumed the role of CEO in March 2012, and Marriott was named executive chairman.

Marriott’s decision to step aside illustrates another of the principles outlined in his book: Know when to get out of the way. “I’ve been in the saddle long enough (more than half a century) that I could easily have contracted Founder’s Syndrome,” he writes. “We all know the type: the hard-driving workaholic who dies at his desk; the 92-year-old patriarch who won’t give up the reins to the younger generation; the founder who keeps so much vital information to herself that when she dies, the company falls apart within months.”

Marriott’s tone is never preachy. Instead, he delivers equal parts wisdom and semi-confessional storytelling. “I’m pretty transparent in the book,” he says, “I’m willing to admit my mistakes.” He points out that although the book focuses on him, there’s more to it than just one man handing out advice. “It’s important to do the best I can to inform and teach about leadership principles,” he says. “But throughout, I focus a lot on working with a team, and that’s really the essence of our business. It’s not about one person, it’s about a group of people.”

Although Marriott has slowed down, he continues to be actively involved with the company’s operations, visiting properties, shaking hands, and penning 700 personal notes a year to employees, friends, and associates. He ends Without Reservations with a Chinese proverb: The journey is the reward. Traveling through the pages of Without Reservations with Bill Marriott, that wisdom becomes evident.

—Jason Matthew Smith is a freelance writer based in Sandy, Utah, and a frequent contributor to Continuum.

2 thoughts on “Lessons Along the Way”