Paleontologists at the U, and around the globe, really “dig” Utah’s dinosaur treasures. 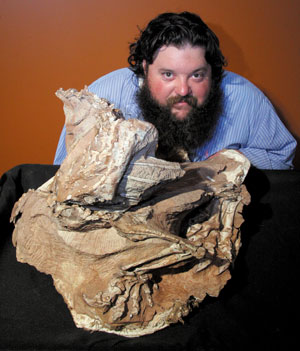 ~ Geoscientist Mark Loewen PhD’09 recalls that, as a child, he didn’t want to study dinosaurs so much as to actually be one. “Literally, for me, I want to know what it was like in the past,” he says. To Loewen, geoscience “is a way to time travel to different places,” and one of geoscience’s disciplines, paleontology—broadly speaking, the study of prehistoric life as shown by fossil remains—“is the way you can see the animals.”

Loewen, currently a paleontologist with the Utah Museum of Natural History and an instructor in the U’s Department of Geology & Geophysics, is among the latest in a growing line of accomplished paleontologists who hail from the University of Utah. Earlier this year, with geologist Joseph Sertich MS’06, Loewen published a study on Seitaad ruessi, a new dinosaur species discovered near Bluff, Utah, in 2004. More recently, he was lead author on a study announcing the discovery of the first horned dinosaur from Mexico. His ongoing work includes research on a Tyrannosaurus rex skeleton discovered in 2005.

In a way, it’s all in a day’s work. It’s not necessary to dig deeply to discover the U’s, and Utah’s, prominent place in paleontology.

Frank Brown, dean of the U’s College of Mines and Earth Sciences, in which the Department of Geology & Geophysics resides, notes that paleontologists go wherever they have to go to collect fossils. Paleontologists from the U have dug into the earth the world over: locales as close as New Mexico and Colorado and as far-flung as Madagascar, Kenya, and South America.

But it so happens that Utah itself is a hotbed of fossil beds.

“Virtually every major group of fossils have been collected in Utah,” notes Allan Ekdale, a geology and geophysics professor. “This includes invertebrates—everything from trilobites to ammonites to chrinoids—as well as vertebrates, from fish to reptiles to dinosaurs and fossil mammals. You’d be hard pressed to find another state that has produced such a wide diversity, such a complete array of fossils.” 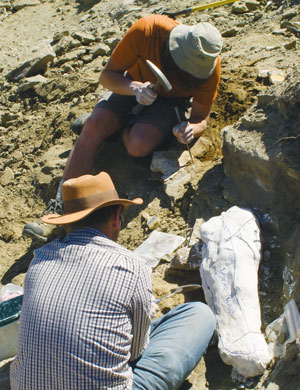 Chuck Beightol, bottom, and Eric Lund BS’04 MS’10 work to unearth an as-yet-unidentified bone from a fossil quarry in Grand Staircase-Escalante National Monument. Beightol, an undergraduate at Eastern Michigan University, was a summer volunteer; Lund is now employed at the UMNH as fossil preparation lab manager. Photo by John Blodgett

More than any other place, the Cleveland-Lloyd Dinosaur Quarry, near Price, put Utah on the paleontological map. In the late 19th century, ranchers came across animal bones that clearly weren’t of their livestock. Researchers from the U began excavations in the late 1920s. By 1939, Princeton University paleontologists had begun a three-year dig to produce their own exhibit. Finally, by 1960, under the direction of William Lee Stokes (a professor at the University for 32 years and head of its Geology Department for 13) and others, the U took serious notice, and the quarry began exposing bones from the late Jurassic period that have since been displayed the world over—in at least 65 museums, according to the Bureau of Land Management, which oversees the quarry.

The world of paleontology has long taken notice. Just as Utah paleontologists have journeyed outward, others have converged upon Utah. “The paleontology program at the U has become a major training ground, not just for Utah students but for people around the world,” says renowned paleontologist Scott Sampson. “Every year, we have people from places like Holland, Japan, and the UK come and join us. So they get firsthand training on digging up dinosaurs, which they then take back to other places they’re working.”

Sampson plays a storied role in the state’s paleontological heritage. Children recognize him as “Dr. Scott, the Paleontologist” from his ongoing role in the PBS children’s series Dinosaur Train—and he previously hosted the Discovery Channel’s four-part Dinosaur Planet series—but he maintains a position as a research curator for the Utah Museum of Natural History. His affiliation with the museum began in 1999, when he became the first person to fill a dual role as museum curator and U of U professor. During that time, he opened up the Grand Staircase-Escalante National Monument to paleontological research, a project that his successor Randall Irmis and others continue to this day. Sampson left the position in 2007 to pursue other educational outreach opportunities.

Irmis picked up where Sampson left off and has also made a name for himself—all before the age of 30. A doctoral graduate in integrative biology from the University of California at Berkeley (with a background in geology and paleontology), Irmis focuses on the origin and early evolution of dinosaurs.

Besides what scientists formally recognize as “dinosaurs,” there were proto-dinosaurs, or dinosaur-like animals lacking some of the key characteristics of the dinosaur family. As a result of his research into these dinosaur relatives (a tie akin to that between chimps and humans), Irmis was part of a team that earlier this year announced such a discovery from Tanzania—Asilisaurus kongwe, a four-legged animal about the size of a dog, which lived approximately 10 million years earlier than the oldest known dinosaurs. 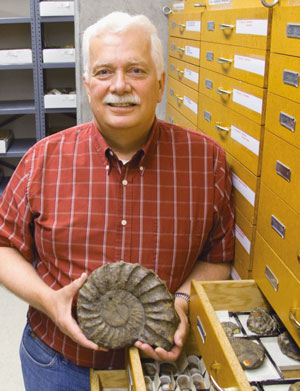 But Irmis is also excited by the opportunities for continued finds much closer to home. “Grand Staircase-Escalante National Monument is one of the most remote areas in the lower 48 states,” he says of the project Sampson started. “It makes it tough to study, but it also means that not many people have been there, so there’s a lot to discover. We’re finding just a fantastic diversity and abundance of different vertebrate fossils there, including a variety of new dinosaur species. [In fact] pretty much every dinosaur species that we find in this area is a new species.” Further, he says that after roughly 10 years of study, they’ve covered only 25 percent of the rocks they’re interested in exploring. And Sampson notes that they could easily explore the monument for another 20 to 30 years and still be coming up with new and exciting discoveries.

But the work is not fast or easy.

While working on his master’s at the U, Sertich, now a Stony Brook University doctoral student, once spent the better part of six months living out of a tent doing field work. “There are a lot of hardships you endure,” he acknowledges. “Extremes in the weather [for example], and just the work itself can be tedious.” It’s backbreaking work, too; opening a quarry can take hundreds, even thousands, of swings with a pick and shovel.

“I’ve been on expeditions where we’ve walked for weeks without finding anything,” Sertich continues. “It’s very discouraging after a while, but you know there’s going to be something out there, and in the end that elation you feel when you find something is totally worth it. That’s the payoff that you’re looking for.”

But sharing that payoff can sometimes take years. Finding a fossil is just the beginning. It can take days or weeks of more painstaking work to remove and prepare it for transport back to the lab, wrapped in a protective jacket of burlap and plaster, so the research can begin. For example, Sertich notes that the Seitaad ruessi he and Loewen discovered near Bluff “took us six years from the time it was discovered to the time it was published.” 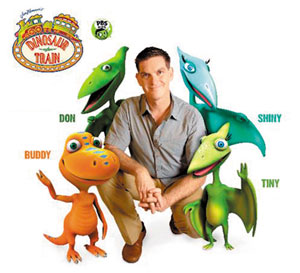 Sampson says he left Utah in part to explore other avenues through which to communicate what he believes is vital about paleontology. He feels that humans are at a critical point in the history of the species, where there’s “a very short time to figure out a sustainable path to the future,” he says. “If not the extinction of humans, we may well be facing the collapse of civilization (and, at a minimum, human suffering on a scale that we have never seen previously), due to a combination of inter-related factors, including overuse of natural resources, destruction of habitat, global warming, and extinction of species.”

“We are now in the middle of the sixth great mass extinction to occur in the last 500 million years—and it is being driven by human activity. This time around, it’s the humans that are the asteroid colliding with the planet,” he explains. “By looking at the lessons of the dinosaurs, we can get a better understanding of the direction we’re heading and maybe make more conscious decisions about it.”

Dinosaurs have another important message for us, Sampson says. Most people don’t comprehend that we’re connected to a “deep-time story” that goes back billions of years to the origins of the universe. “The decisions that we make today will impact the future of this story dramatically,” he says. “If things continue [the way they are now], then we’re going to change forever life on earth. We have a chance to turn it around, but it’s a very small window of time.” By looking back millions of years at dinosaurs, Earth’s “most famous extinct organism,” he explains, we find a “tremendous avenue to get us into the deep-time story” of our past and our potential future. 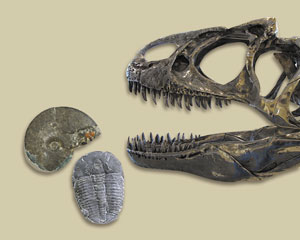 Allosaurus: Though not unique to Utah, where it is the state fossil, Allosaurus is among the best known of the theropod dinosaurs (fast-moving, bipedal carnivores), mainly due to the quality of skeletal remains found in the Cleveland-Lloyd Dinosaur Quarry. Utah’s first state paleontologist, James Madsen, wrote a book on the species in 1976 that remains a classic authoritative text. (Madsen also founded a scholarship at the Utah Museum of Natural History to support students who research collections excavated from the quarry.)

Ammonite: Perhaps the most widely recognized fossil, ammonites are distinguished by a ribbed spiral-form “nautilus”-type shell, and are closely related to the octopus, squid, and cuttlefish.

Elrathia kingii: A genus of the trilobite species (an extinct marine animal), E. kingii is among the most recognizable of trilobites in particular and fossils in general, due primarily to the number of specimens that have been uncovered in Utah. Its likeness (reminiscent of a cross between a horseshoe crab and a pillbug) is reproduced on coffee mugs in the Department of Geology & Geophysics at the University of Utah.

Year of the Dinosaur 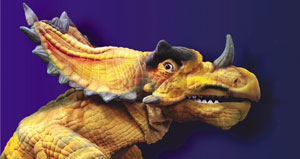 This is the “Year of the Dinosaur,” and among the special events created in celebration is “The Dino Show: Live from Laramidia” at the Utah Museum of Natural History. “The Dino Show” brings to life a horned herbivorous ceratopsian that lived 75 million years ago in what is now known as the Grand Staircase-Escalante National Monument. Mark Loewen was among those who discovered this new species, the first horned dinosaur found in the area. He collaborated on the interactive, family-friendly “Dino Show” program, in which University of Utah students studying puppeteering operate a 10-foot-long, 65-pound ceratopsian puppet.