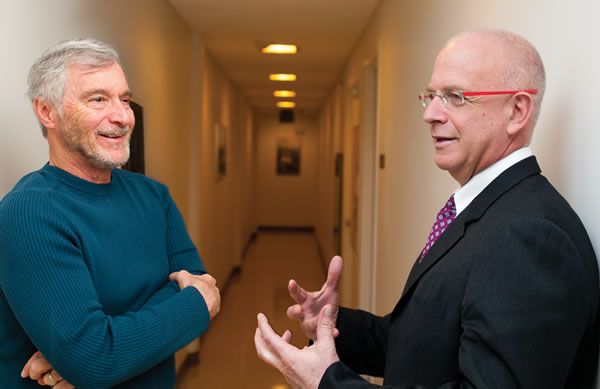 Action, preaching, and speech: How far should the First Amendment go?

~The First Amendment to the U.S. Constitution has been the subject of heated debate recently, with controversies arising over whether, and to what extent, certain types of speech and expression—from flag-burning and public protest to “hate speech” and “fiery rhetoric”—should be protected.

Continuum sat down for a discussion with Wayne McCormack and Amos Guiora, both professors at the S.J. Quinney College of Law, who have openly expressed opposing views on the subject of freedom of speech.

While the two professors strongly disagree on issues of free speech and the First Amendment as they pertain to religion, terrorism, and freedom of the press, among other areas, they do so while remaining consistently civil and collegial.

Let’s begin with a foundational question: Under what circumstances should the First Amendment be limited?

AG: As I propose in my book Freedom from Religion: Rights and National Security, the First Amendment should be limited when extremists are inciting to violence.

WM: The most famous test [for limiting the First Amendment] is ‘clear and present danger,’ but it is more usually expressed in terms of an ‘imminent’ threat to health or safety. It all comes down to imminence—how close to the point of danger should we allow people to come before squelching expression? The First Amendment does not protect incitement to violence.

Amos, in your book, you outline the dangers of religious extremism and express the opinion that limits should be placed on free speech even within houses of religion. Is it fair to single out religion in this way? Who determines what is a real threat and what is merely fiery rhetoric delivered from the pulpit? Who defines what is moderate faith and what is extremism? 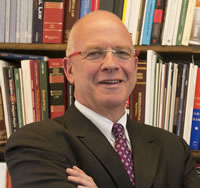 AG: Religious extremists are identified in the book as posing the greatest single contemporary danger to civil democratic society. That, however, does not suggest that secular extremists don’t also pose a direct threat to society, in which case the proposed First Amendment limit would apply to them as well. In the book, I propose that determining whether speech presents danger to society by inciting violence be articulated by Congress legislatively. A careful definition balancing both the right to free speech and freedom of religion with the obligation to protect society would ensure minimizing the impact on ‘fiery rhetoric.’ I define moderate faith as the practice of religion without seeking to impose a particular faith on others, whereas religious extremism is predicated on the absoluteness of faith, intolerance of other faiths or of people of moderate faith of the same faith, and the conviction that violence intended to honor God is legitimate. 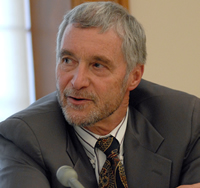 WM: I have no idea why religious speech should be treated any differently from other forms of incitement, whether racial, ideological, or even profit-driven—that is, by drug lords or others involved in organized crime. They all present dangers that society should be able to address evenhandedly. The book seems to project the idea that U.S. and U.K. authorities have exempted clerical speakers, but the U.K. convicted [the radical Islamist cleric] Abu Hamza el-Masri of ‘glorifying terrorism,’ and the U.S. convicted Ali al-Timimi, [a religious lecturer at a Virginia mosque from which several young men traveled to Pakistan for terrorist training] of ‘inducing others to conspire to violate the Neutrality Act.’ Both were prosecuted on the basis of fiery rhetoric in religious settings.

Even if there is widespread agreement about the need to protect the citizenry from security threats posed by extremists, do we not risk undermining sacred individual liberties by attacking religion in the name of preventing imminent lawless action? For instance, how imminent must the prohibited conduct be? How likely must it be that such speech produce unlawful conduct, and how is that likelihood calculated? And does the degree of potential harm affect the degree of constitutional protection?

AG: The state’s primary obligation is to protect civil democratic society and innocent members of that society. To that end, the religious extremist speech I propose limiting must pose a threat wider than the imminent test articulated by the Supreme Court in Brandenburg v. Ohio [that government cannot punish inflammatory speech unless it is likely to incite imminent lawless action]. In the context of ‘fire in the theater,’ I suggest the fire is already in the theater. With respect to the likelihood that the speech will cause harm, I propose that law enforcement conduct monitoring and surveillance of religious extremist faith leaders who are inciting in order to both warn the latter and, if need be, facilitate prosecution.

WM: Individual liberties are one element, but I think an even larger danger from targeting religion is the pragmatic impact on social structures. Targeting religion in today’s world would fuel jihadist rhetoric, which plays heavily on the propaganda that the West is targeting Islam. The Supreme Court of the U.S. has made it clear that government cannot target religious practices or speech differently from other practices or speech. For some people, it made sense to prohibit ritual slaughter of small animals, but the court said we can’t single out religious practices and treat them differently from other slaughtering—that is, for culinary or euthanasia reasons. To repeat, there is nothing (neither statutory nor constitutional) that exempts religious incitement to violence. 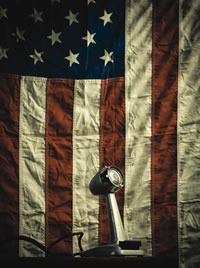 The U.S. Supreme Court recently ruled that a Kansas-based church group’s practice of picketing at military funerals was a form of protected free speech. Members of the church group argue that military deaths are God’s punishment for America’s tolerance of homosexuality, and regularly picket, carrying signs with anti-gay slurs. In an 8-1 opinion, the Justices determined that such speech, no matter how repugnant, is protected (but left open the possibility of local regulation of activities, including protesting at funerals). Afterwards, some commentators on both the left and the right argued that this decision further blurs the distinction between free speech, which is protected, and hate speech, which is not. What are your thoughts?

WM: Our Constitution does not allow prohibition of hate speech any more than prohibition of other kinds of speech—the U.S. even has a problem with some international human rights covenants for this reason. The closest the court has come is allowing prohibition of cross-burning ‘with the intent of intimidating any person.’ If funeral protesters get too close to the ceremony physically, or impede access, the local authorities can move them out. Similarly, if it were shown that the protests were an ‘outrageous attempt to inflict severe emotional distress’ on issues of private concern, then normal rules would allow a damage action against them. The Supreme Court held that the protests were a matter of public concern and thus protected. I disagree with the court on this issue, but again I emphasize that the court has not protected speech that is an incitement to violence.

AG: Without doubt, the conduct of the church group is objectionable and abhorrent; that said, I agree with the court’s decision, because the conduct/speech does not fall into the narrow category I propose in my book. Much as the Supreme Court held that burning the American flag (United States v. Eichman) is protected free speech (albeit objectionable to many), picketing military funerals, according to the Supreme Court, falls into the same category. Neither, however, meets the test of incitement as I propose in the book.

Finally, even if religious extremism were curtailed by limiting its constitutional protection, how would that deter those prone to inciting violence from simply turning to secular means—that is, calling for violence in the name of some other cause not involving religion?

WM: Amos’ book says that ‘religion is whatever you determine it to be… and therefore religion will not be defined.’ He prefers instead to define and attempt to restrict ‘extremism.’ Fine, that’s exactly what the law does in prohibiting ‘incitement.’ So why does the book talk about religion?

—Barry Scholl BA’86 MFA’91 JD’05 is an attorney and the director of external relations at the S.J. Quinney College of Law.

About the Legal Scholars Wayne McCormack is the E. Wayne Thode Professor of Law at the U’s S.J. Quinney College of Law, where he teaches constitutional law, counter-terrorism and the international law of crimes, and civil procedure. McCormack joined the U of U faculty in 1978 and has served three stints as associate dean for academic affairs. From 1997-2002, he coordinated the U’s involvement with the 2002 Olympic Winter Games, which led to his becoming engaged in security planning for major events and interested in international legal issues, including the law as it relates to terrorism.


Amos Guiora, professor of law at the S.J. Quinney College of Law, is a retired lieutenant colonel in the Israel Defense Forces. Prior to joining the U of U law faculty, Guiora was professor of law and the founding director of the Institute for Global Security Law and Policy at Case Western Reserve University School of Law. Guiora teaches criminal law, criminal procedure, international law, global perspectives on counter-terrorism, and religion and terrorism.

Turning from religion to other First Amendment issues, last fall, a controversy erupted after WikiLeaks released sensitive, and in some cases secret, U.S. government communiqués. In the ensuing uproar, critics charged that such leaks are likely to lead to unforeseen consequences that might include damaging the interests of the U.S. and its allies and maybe even undermining foreign policy and jeopardizing public safety.  Supporters essentially argued that transparency in government strengthens democracy and free speech rights. How do you respond to those arguments? Do bloggers and the so-called ‘muckraking’ Web sites enjoy the same free speech protections under the First Amendment as The New York Times and Washington Post? And is it possible—or desirable—to distinguish ‘positive’ leaks that deserve such protections from ‘negative’ leaks that do not?

WM: The publisher of classified information commits a crime if the publication is ‘prejudicial to the safety or interest of the United States or for the benefit of any foreign government to the detriment of the United States.’ In my view, the statutes wisely limit criminal sanctions to activities that can be shown to have tangible effects on U.S. interests. And I haven’t seen anything thus far in the WikiLeaks documents that have that effect. I have never understood the argument that ‘responsible journalists’ should be given greater freedom than other commentators. (If I could find a way to shut down the screaming heads of what passes for political commentary on television, that would be different.)

AG: Having read much of the WikiLeaks material available on the Internet, I do not believe [the leaks] pose a danger to U.S. national security. Furthermore, it is reasonable to presume that foreign leaders who interact with the U.S. assume telegrams and other correspondence will be leaked and conduct themselves accordingly. The only limit I would propose with respect to transparency (which I advocate) is classified intelligence information, in particular names of confidential sources who are at extraordinary risk if their identity is made public.

On a similar note, how far does (or should) the First Amendment go to protect a reporter from revealing his or her confidential sources? Should there be special exceptions to those rights when national interests or personal safety are at stake? Is a shield law like the proposed Free Flow of Information Act a good thing in terms of encouraging public discourse and inspiring whistle blowers to come forward? Do you believe federal standards are needed to establish protecting reporters and their confidential sources?

AG: I believe reporters must be able to protect their sources; that is essential to a free and robust press.

WM: It’s beyond my expertise to know whether there are reasons to give journalists special exemptions. Somehow it seems that if a reporter has information that is determined by a court to be critical to a criminal investigation, shouldn’t that information be divulged under the same standards that apply to me?

One thought on “From 'Fiery Rhetoric' to 'Fire in the Theater!'”