Two figures are bent over The Diary of Anne Frank  where it lies open on the library table. The one with the distinguished fringe of white hair is John Bennion, the immediate past president of the University of Utah’s Emeritus Alumni Board, whose members graduated from the University 40 or more years ago. The other is much younger, 12 to be exact, her hair hidden beneath a beautifully embroidered Muslim headscarf, her brown eyes dancing as she reads about a girl not much older than herself.

It’s partly due to Bennion’s efforts that Binti Aden, whose family came to Utah as refugees from Somalia when she was a toddler, is able to read Anne Frank’s story. Binti’s parents, although they are very supportive, don’t speak much English, so they’ve never been able to offer her help with homework or reading in English—the everyday help many American students take for granted. Binti and more than a hundred other refugee and immigrant classmates at Bryant Middle School in Salt Lake City are below grade level in English and are struggling to gain the reading and writing skills that will mainstream them out of the school’s English as a Second Language (ESL) program and on to a path toward successful adult careers.

That’s why Bennion BS’61 MA’62, an educational consultant and former University of Utah professor of urban education, established the Emeritus Alumni Board’s Bryant Scholarship Project. The grandson of Milton Bennion (former dean of the University of Utah School of Education) and son of M. Lynn Bennion BS’26 MS’31 (former superintendent of the Salt Lake City School District), John Bennion obtained degrees in humanities from the U before going on to finish a doctorate in educational administration and leadership at Ohio State University in 1966. He was superintendent of school districts in Rochester, N.Y.; Bloomington, Minn.; and Provo, Utah; and then eventually followed in his father’s footsteps, becoming superintendent of the Salt Lake City School District from 1985 to 1994.

Bennion has spent a lifetime helping children get the education they need to succeed, working hard to bridge the achievement gap between students of varying economic, ethnic, and geographical backgrounds. In 1998, he organized the Utah Urban School Alliance, and in 2002 he was awarded the American Association of School Administrators Distinguished Service award for his lifetime contributions to education.

Bennion was inspired to establish the Bryant program several years ago while serving as chair of the Emeritus Alumni Board’s Service Committee. “I thought that a very worthwhile service project would be to recruit emeritus alumni to tutor in a school that was full of students with diverse backgrounds,” Bennion says, “including students who were refugees and had traumatic experiences before coming to the United States. Bryant Middle School seemed like a good bet.” 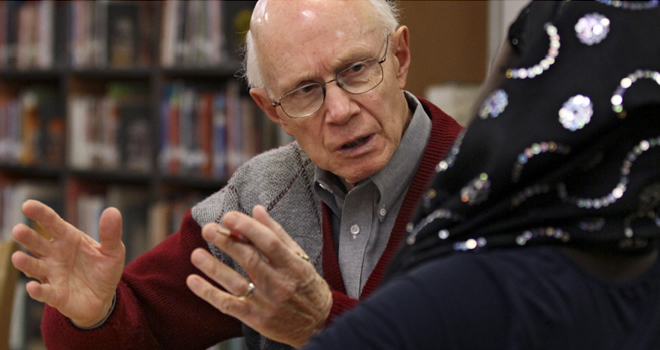 John Bennion, who created the Bryant Scholarship Project while head of the Emeritus Alumni Board, talks with seventh-grader Binti Aden.

Located near the Avenues neighborhood of Salt Lake City, Bryant Middle School (which sits on the same site as the former Bryant Junior High, of which Bennion was an alum) is fed by several elementary schools from the inner city. This year, of the 540 students in Bryant’s seventh and eighth grades, 45 percent speak one of 30 languages other than English at home. More than a hundred of Bryant’s students are considered “English learners” who aren’t fluent in English and are enrolled in its ESL program, and nearly two dozen are refugees from countries such as Somalia, Afghanistan, Iraq, Myanmar, and Bosnia.

Bennion contacted Bryant’s principal, Frances Battle, and the school’s ESL teacher and Alternative Language Services (ALS) coordinator, Michelle Stimpson BA’00 MEd’03. Both were enthusiastic about having University of Utah alumni tutor some of their students.

Now the tutoring project Bennion envisioned is in its fourth year, with 18 tutors helping 19 students this academic year. According to Stimpson, the pool of tutors includes not just Emeritus Alumni Board members, but also other alumni, University students, and friends and families of alumni. Tutors don’t need formal training. They just need to read with the kids and help them talk about what they’ve read. Ted Nagata MFA’60, a tutor, former Emeritus Alumni Board member and retired graphic artist, says when he meets with his students, “we talk about everything. I always want to know how their day went, what they do in the evening, what TV programs they watch. We talk about the Jazz or football. I spend a good portion of the time just conversing with them. That’s part of learning.”

As the tutoring project took off, Bennion says, “the idea emerged of finding a way to incentivize students we’ve tutored as they leave Bryant—those who showed academic promise—so they have a reason for doing their best in high school and being college-ready when they leave high school.” When Bennion suggested a scholarship program, another Emeritus Board member, who wished to remain unidentified, generously donated a $5,000 scholarship to the University of Utah for each of nine candidates Bennion identified.

The next year, the Emeritus Alumni Board raised another $10,000, the original donor and the Alumni Association matched that, and additional contributions filled the coffers until five more promising students could receive the same scholarship. The board hopes to fund a $5,000 scholarship for at least four more students every year.

While many students are tutored by the volunteers, not all will qualify for the scholarship. Candidates are tracked beyond Bryant, throughout high school. “This scholarship will only be given if the students meet certain challenging criteria in high school,” Bennion says. The students must maintain good grades, score well on the ACT, and meet with their cohort a few times a year for progress reports and positive peer support. 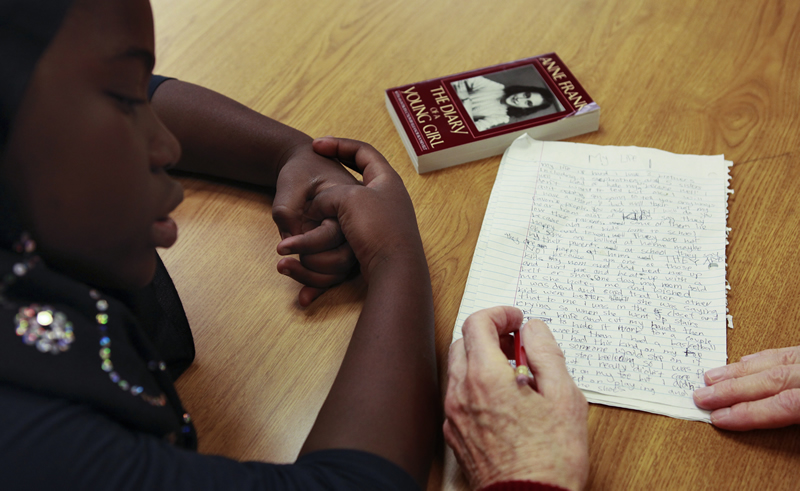 Binti Aden, who is from Somalia, works on her writing with University of Utah alumnus John Bennion.

In addition to being the driving force behind the tutoring and scholarship project, Bennion is also a tutor.

“Mr. Bennion, he helps me understand the words. He helps me spell the words and hear their sounds,” says Binti. “It’s been good.”

Binti isn’t just learning to read books. She’s writing one. In fact, she’s already 7,000 words into her novel, which she calls “a fairytale-ish story.” She’s also writing the story of her life, which includes siblings left behind in Africa. She credits Bennion with helping her learn to write so that other people can understand her stories. “Sometimes when I write, I don’t know what I’m writing, I just can’t stop. When I read it, I don’t even understand it!” she says, laughing. But with Bennion helping her, she says, “It’s getting better.”

Successes like Binti’s excite Stimpson and Principal Battle. “I’m just pleased that we have this opportunity,” says Battle. “There are many schools where [the Emeritus Alumni Board] could be doing this, but they chose Bryant. …I feel strongly about a community being invested in the growth and development of our students, and that’s one of the things that this program is definitely providing. It’s a wonderful partnership.”

It’s a partnership that’s working. Bryant continues to pass Annual Yearly Progress requirements (part of the No Child Left Behind program) every year in language arts, showing that their English language learners are making progress according to federal guidelines. “We credit our tutor program with having helped us to achieve this goal each year,” Stimpson says.

But there’s more to the tutoring program than test scores. “The tutoring is wonderful in the academics,” says Battle, “but it’s also great to help the students with transitions during middle school. There’s another person who’s invested in what the student is doing, helping to mentor. Being in middle school and dealing with adolescence is one thing, but then when you have a language barrier coupled with that, that’s even greater.” Stimpson agrees, saying, “The difference I care most about is the looks on the faces of the kids when their tutor shows up.”

Carolyn Kump BS’53—president of the Emeritus Alumni Board, former educator, and community volunteer—has tutored at Bryant all four years. “I wouldn’t give it up for anything,” she says. “The one-on-one makes the student feel like someone cares enough to take the time.” She admits it’s not just the kids who benefit. After a particularly successful session with a student, Kump says, “It is so exhilarating to me. I feel a high, like maybe you touched someone’s life in a positive way, and that’s the best thing you can do in this world.”

The Bryant Scholarship Project depends on the generosity of alumni and caring community members, both as tutors and as donors to fund future scholarships. Battle and Stimpson worry that some of their ESL students don’t have a tutor, and many kids have come to them requesting one. They’re always on the lookout for more tutors, because the impact on kids like Binti is encouraging. “Parents have expressed to me that a tutor does for their kids what they wish they could do,” says Stimpson. “They wish they could sit down and help them with their homework, help them with what they’re reading, so they are grateful.”

As the first group of tutored students navigates their way through high school now, Bennion enjoys watching their progress. “I think it’s reinforced my belief that to help at-risk kids be successful and fulfill their potential, there needs to be a lot of positive intervention in their lives,” he says. Because of Bennion’s contagious belief and tireless drive to make a difference, tutors from the Emeritus Board are helping ensure that at least some of Bryant Middle School’s ESL students have a better shot at getting the education they deserve. And that’s why, for an hour every week, anyone looking for Bennion will find him sitting in the library with a determined seventh-grader named Binti, helping her learn to spell words like “success.”

— Kelley J.P. Lindberg BS’84 is a freelance writer based in Layton, Utah.

If you are interested in becoming a tutor in the Bryant program or donating to the scholarship fund, contact Joanne Beardshall at the Alumni Association, at 801-581-3719 or joanne.beardshall@alumni.utah.edu.

One thought on “Fostering Education”