The University of Utah almost lost honors freshman Bettymaya Foott to one of several other colleges she had considered while in high school in her hometown of Moab, Utah. “I really wanted to get out of Utah,” says Foott, who now spends some of her spare time showing off the U to prospective undergrads.

Academically, Foott fits the profile of what the U wants more of on its campus. She graduated from Grand County High School with a 4.0 GPA. She was valedictorian, captain of her soccer and debate teams, and she was a volunteer at the Moab Valley Multicultural Center. A full-ride Eccles Distinguished Scholar Award and the University’s study abroad and student exchange programs sealed the deal for Foott, who at first was fearful of attending a big university. “I really like it,” she says of her University experience. “I’m surprised how much I like it up here.”

Foott is in it for the long haul now at the U, concentrating on environmental studies and Spanish. “My goal is grad school and beyond,” she says. Her honors advisor, Charlotte Hansen Terry HBA,10, says a lot of bright students like Foott might overlook a good thing in their own backyard. “This happens in every state,” Terry says. But that—and a lot more—will gradually change during the next few years if a new first-of-its kind enrollment management plan being put in place by U officials is a success. Foott is exactly the kind of well-rounded, bright student U leaders want as the University works to shift its overall academic profile.

Starting this year, admissions requirements for incoming freshmen will change, as the U has dropped its so-called admissions index in favor of a more comprehensive evaluation of students’ accomplishments. Dovetailing on that plan will be the fall 2012 opening of the new Donna Garff Marriott Residential Scholars Community, a unique 309-bed residence hall that U officials are counting on to help woo and retain some of the nation’s best college students.

In 2010, the U brought in consultants from the American Association of Collegiate Registrars and Admissions Officers to help orchestrate a new enrollment plan. And U officials plucked an enrollment expert from Louisiana State University—Mary G. Parker—to put the plan in place. Parker, now the U’s associate vice president for enrollment management, arrived in September 2011 and was given responsibility for bringing together the entire enrollment process, including student recruitment, admissions, registration, financial aid, and network support. She also has the task in the coming months of writing the University’s first Integrated Strategic Enrollment Management Plan. The new enrollment plan is expected to be ready for implementation by the start of the new recruiting season in August. 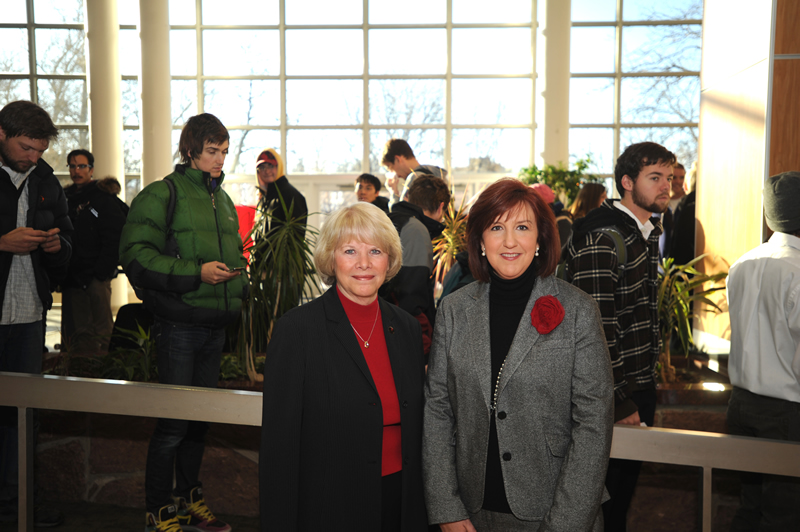 Parker will be working from a one-page snapshot of change that lists overall enrollment profile goals. The goals document also sketches an “ideal” freshman class of the future, with average ACT scores for incoming students migrating upward from 24.4 to 26 (the upper 15 percent in the nation). Half of those students would live on campus, compared with the current 34 percent. And ideally, 30 percent of freshman students would qualify for the U Honors College, and 20 percent would enroll in it, instead of the current 10 percent. Average SAT scores would be up by about 90 points in each of the test’s three categories. Another ambition is to raise the graduation rate, within the current standard of six years.

In short, if the plan’s goals are achieved, the U student body soon won’t look quite like the one left behind last spring when Associate Vice President for Budget and Planning Paul Brinkman retired. Part of his job during his 20 years at the University was to help piece together the U’s enrollment puzzle. He helped arrange the funding for and hiring of the consultants for advice on creating an integrated enrollment plan unlike any previous strategic plan at the U. The puzzle pieces included a growing university, lack of student housing, changing admissions requirements, and entry into the Pac-12. “It’s just a lot of things coming together to where you sense the need to develop a more coherent vision,” Brinkman now says.

Sources: University of Utah Office of Student Affairs; U Office of Budget and Institutional Analysis

The U has gone from an open-enrollment policy in the ’80s to being “moderately selective” today, he says. “It has come a long way, but it can go further. We need to do a better job of recruiting students who will succeed and in retaining them. That’s a complex process.”

The U shouldn’t strive to be an “ivory tower” or a Stanford University, Brinkman says, but it should be among the “upper echelon” of public universities while still providing opportunities for “reasonably able” students in Utah. Going after more students like Foott fits with Brinkman’s idea of a slowly changing campus makeup.

With the number of high school graduates in Utah on the rise (while many other states are in decline), the new plan is expected to help shape exactly how the University grows. Utah Higher Education Commissioner William Sederburg is cheering the U’s efforts, including the plan to “ratchet” up GPA and ACT requirements, and says, “I think this is a little of a new game for the U.”

He wants to see the U avoid becoming a “mega” university like Arizona State University as public institutions in Utah continue to grow. He’d prefer that the U zero in on its research and flagship functions and maintain high standards while the state’s other public institutions absorb some of the projected growth. 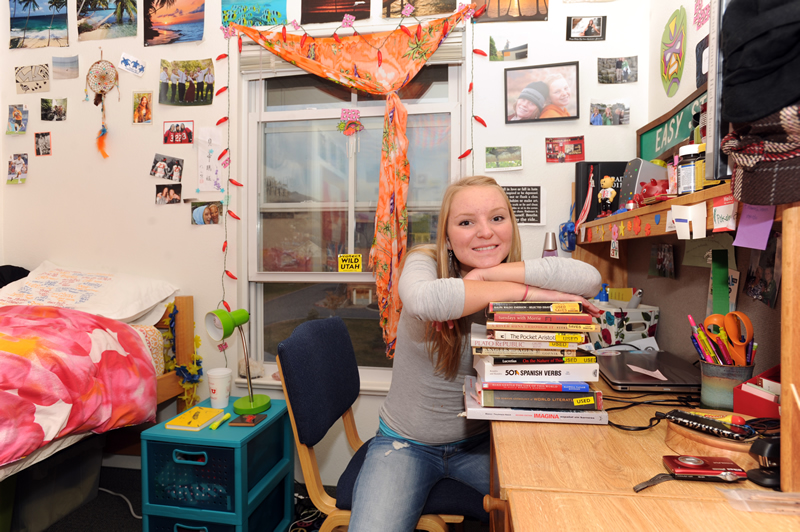 Freshman Bettymaya Foott, who is focusing on environmental studies and Spanish at the U, sits in her dorm room on campus.

Student Affairs Vice President Barbara Snyder says the U’s entry into the Pac-12 provides a perfect opportunity for re-examining enrollment. The U for years used an index system that weighed a student’s high-school GPA and ACT scores in correlation with one another. Students with higher ACT scores could have a lower GPA, and vice versa, and still qualify for admission to the University. Under the new admission profile that will be used starting this year, grades will have twice the importance of test scores. U officials also plan to take a closer look at the whole academic profile of an applicant and ask more probing questions. What did the student do outside of school? What activities did the student participate in during school? What kinds of classes did the student take? Were there any honors classes?

The days of an “I’m getting in” attitude, with just the minimum required GPA and ACT score, are fading away. “We are no longer doing that,” Parker says. “There is no more guarantee.” Qualified Utah students are the U’s first priority, and they will be admitted. The U also will continue recruiting qualified out-of-state students who have Utah ties.

U Student Recruitment Director Mateo Remsburg BA’94 (who holds a master’s from Kansas State) says that as word is spreading about the new profile goals for incoming freshmen, he is hearing a common refrain from high school counselors, who are saying, “Well, it’s about time.” One ripple effect will be that as U admissions requirements tighten and the University starts asking high schools for students’ final transcripts (instead of merely confirming that a student graduated), those students may be less likely to squander their senior year.

Change will be gradual. “It’s like a cruise ship; you can’t turn it on a dime,” Remsburg says. The challenge, he says, will be to become known as a “highly selective” school without being perceived as “elitist.” But morphing enrollment expectations will likely mean that marginal students who would have barely made it into the U in the past might not get a nod from the U down the road.

And more of those who do make it in will live on campus, if the U has its way. “I hate the term commuter campus,” Snyder says. She wants to see higher retention rates and students who are more invested in their university, and she believes more campus residents can help achieve those goals. But a new honors dorm won’t be enough, and estimates for new digs put the need at 1,000 to 2,000 beds down the road if the U wants to meet its campus living goal. 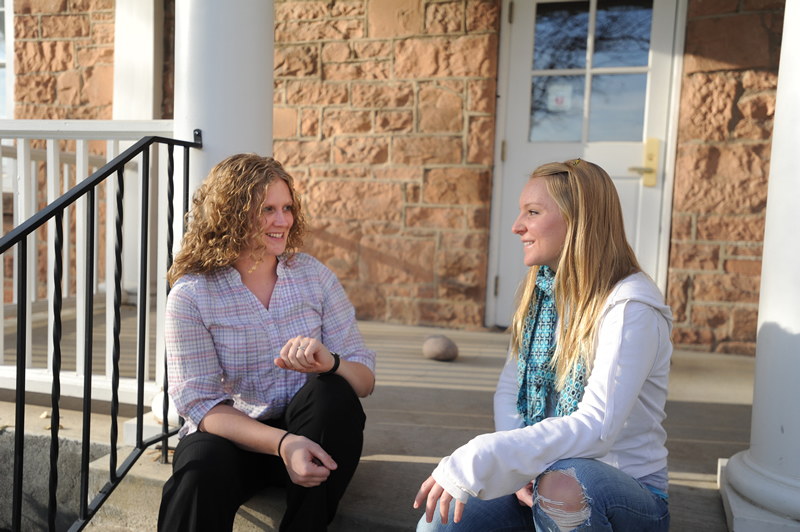 Getting students to stay through to graduation will be a key indicator that all of the elements of the new plan are working. The U’s freshman to sophomore retention rate now is around 87 percent, and the six-year graduation rate is 57 percent. That graduation rate ranks the U at third from last in comparison with 21 research-focused institutions nationwide, according to a November 2011 report released by the Utah Office of the Legislative Auditor General. Auditors noted that the University’s low rate also doesn’t compare well with the U’s new Pac-12 peers. The University “enrolls a relatively large percentage of students who are not ready to succeed,” the auditors said. “In mathematics and science in particular, many enrolled students [at the U] appear to be ill-prepared.”

Utah has a few more unique reasons why college retention and graduation rates lag. Snyder notes that many U students from Utah postpone college until after serving a mission for The Church of Jesus-Christ of Latter-day Saints—young LDS men typically serve two-year missions, while women may serve 18 months. Some students drop out to get married and start families. Others attend classes only when they believe they can afford them.

U officials hope that luring higher-achieving students from Utah and across the nation, in addition to more students living on campus, will mean more graduates. Parker knows she has a huge task: She will craft and put in place the new plan by August, and then there will be yearly analyses. In three to five years, the U will assess how it’s doing with the plan and its enrollment goals, including whether more academically stellar students like Foott have opted to attend the U.

“It is an ongoing process that we will continue to build upon,” Parker says. “It is the way we should be doing business.”

—Stephen Speckman is a freelance writer and photographer based in Salt Lake City.