In the operating rooms of television medical dramas, it looks pretty easy. Just slip a tube down the patient’s throat to keep her breathing and save her life. But in reality, intubation is often a lot harder than that, requiring a combination of both precision and chance.

For starters, medical technology only gives an anesthesiologist a partial view of the trachea, so getting it right is a bit of a guess. And it gets even tougher if there’s an obstruction such as a tumor in the way. Go too far past the vocal cords and you can puncture a lung. Take too long and a patient can suffer dire consequences.

“We only have three minutes to reestablish oxygen delivery to the lungs,” explains Sean Runnels, a cardiothoracic anesthesiologist and assistant professor at the University of Utah. “If we don’t get it right, they are brain dead or have cardiac arrest.” With that in mind, Runnels set out to find a better way. His idea: Marry two existing pieces of technology into a single, slim color-coded device that makes the process easier for doctors and safer for patients. 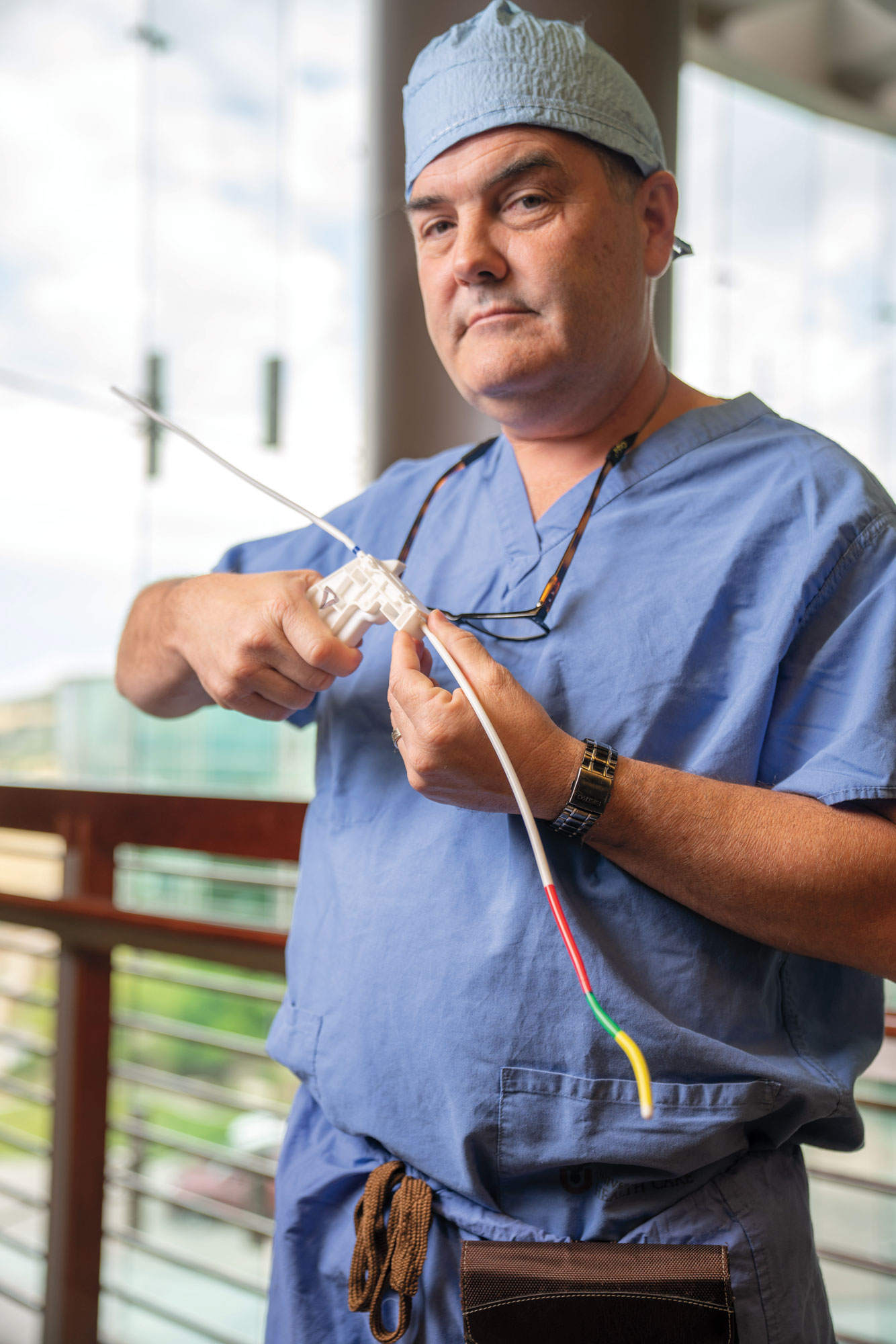 Sean Runnels, a cardiothoracic anesthesiologist and assistant professor at the U

In October, the intubation innovation will launch through Runnels’ new medical device company, Through the Cords. Built with a team assembled through the U’s Lassonde Entrepreneur Institute, the device is the first significant innovation in intubation technology in 40 years, Runnels says.

It’s also an example of the kind of U-based medical innovation that has been changing lives for the better since the 1950s—think plastic catheter, Jarvik heart, the first artificial arm—and is now driving Utah’s economy in a dramatic way. Last year alone, companies in what’s broadly known as the life sciences industry (also referred to as bioscience) reported $10 billion in sales, pumped nearly $500 million in tax dollars into state government, and added jobs at a faster rate than any other segment of Utah’s economy.

These companies are using next-generation technology to make medical devices and equipment, produce drugs and pharmaceuticals, or do medical research, diagnostics, biomedical distribution, and more. “There’s such a strong need for the technologies being developed,” says Clark Cahoon of the Governor’s Office of Economic Development (GOED), whose job exists to support the needs of the life sciences industry. “There’s so much going on, and it’s growing faster than anybody expected.”

So how fast is fast? When measured by job growth data from the industry trade association BioUtah, it’s pretty fast. Between 2012 and 2017, the number of life sciences jobs across the state grew by 25.4 percent, far faster than the national industry average of 5.9 percent, a recent California report shows.

One could chalk up the explosion in the sector to market forces or technology advancements that have helped flatten the path to discovery—and those things would be true. But it’s also something more: A sort of convergence of aptitude, opportunity, ingenuity, and institutional support that when combined with a Utah-born spirit of collaboration has people in education, government, and industry working toward common goals.

“The state is completely supportive and wants to work to decrease the number of barriers for the university, and the education system is evolving to provide the right environment for young people with ideas,” explains Keith Marmer, who runs the U’s Center for Technology & Venture Commercialization (TVC), which helps bring campus-driven invention to the marketplace. “It’s like a perfect storm.”

It’s no secret that Utah is a business-friendly place. Over the past decade, the state has been consistently named one of the best for business by Forbes magazine, and this year, it was ranked second best for startups by the financial website WalletHub. This climate has allowed Beehive State industries to flourish, and the life sciences sector is no exception. Over the past decade, its successes have grown into a bona-fide boon for Utah’s bottom line, pumping billions in taxes, private investment, grant funding, and higher-than-average wages into the economy.

It’s also drawing the attention of companies considering a relocation and adding additional value to Utah communities by fostering growth among indirect goods or services companies, including retailers and small manufacturing and construction firms. “We see a return on investment when we see these [life sciences] companies taking root here,” Cahoon adds. “There are no losers. When you draw this kind of industry and it’s successful economically, it makes for better jobs. It drives education programs. It helps the whole community.”

Data provided by BioUtah, the Utah Department of Workforce Services, and the Biotechnology Innovation Organization, a national biotech trade association.

New data from a first-ever study of the industry by the U’s Kem C. Gardner Policy Institute shows the breadth of the life sciences boom. According to the data, in 2017, Utah’s 1,038 life sciences companies:

The report also shows that the industry’s job growth rate has been consistently high over the past 15 years. From 2002 to 2007, it grew by 14 percent. The rate held steady during the recession that began in 2008 and then skyrocketed to 26 percent over the last five years.

“Utah already has the fastest pace of job growth in the nation, and then life sciences is growing at a rate even faster than that,” says Juliette Tennert, the institute’s director of economic and public policy analysis. “But I don’t think you can have this result without the University of Utah being here.”

University-based research and innovation is a key player in the growth seen in life sciences companies, Tennert says. “And now I think the labor force is so critical that we need to continue to invest in opportunities for students to become skilled, so that they can stay here and work, not go somewhere else,” she adds.

Building a highly skilled workforce that is nimble and rooted in the kind of next-generation thinking that drives translational research is precisely what the university aims to do, explains Troy D’Ambrosio BA’82, executive director of the Lassonde Institute. The approach isn’t really new. Innovative research and invention, along with entrepreneurial thinking, have long been valued on campus, where many life science industry leaders got their start. Myriad Genetics, Sorenson Genomics, and Merit Medical, for example, all spun out to the marketplace from ideas incubated here, which helped plant the early seeds of cooperation between industry and education that U administrators have sought to grow over the past decade.

That’s happening through interdisciplinary initiatives like the Center for Medical Innovation and the Lassonde Studios that provide opportunities for students to launch startup business ventures, with seed money from the U, or join forces with faculty to work to find solutions to real world industry problems that improve health care and reduce costs.

And it works. Over the past seven years, the competitive Bench to Bedside program has awarded grant funds to teams that have developed more than 180 new technologies, filed 111 patents, started over 50 sustainable companies, and trained more than 1,000 students to be the next generation of entrepreneurial leaders. “Traditionally, much of our education system has been focused on how things have been done, or what is being done, not on the new and the next,” says D’Ambrosio, who works closely with GOED and the Economic Development Corporation of Utah. “Now we’re building those kind of thinkers so that we can say to industry, we have people trained to do what you want to do.”

THE CROSS-DISCIPLINARY IDEA SHARING APPEARS TO BE INCREASING THE NUMBER OF MEDICAL INNOVATIONS PERCOLATING ON CAMPUS. 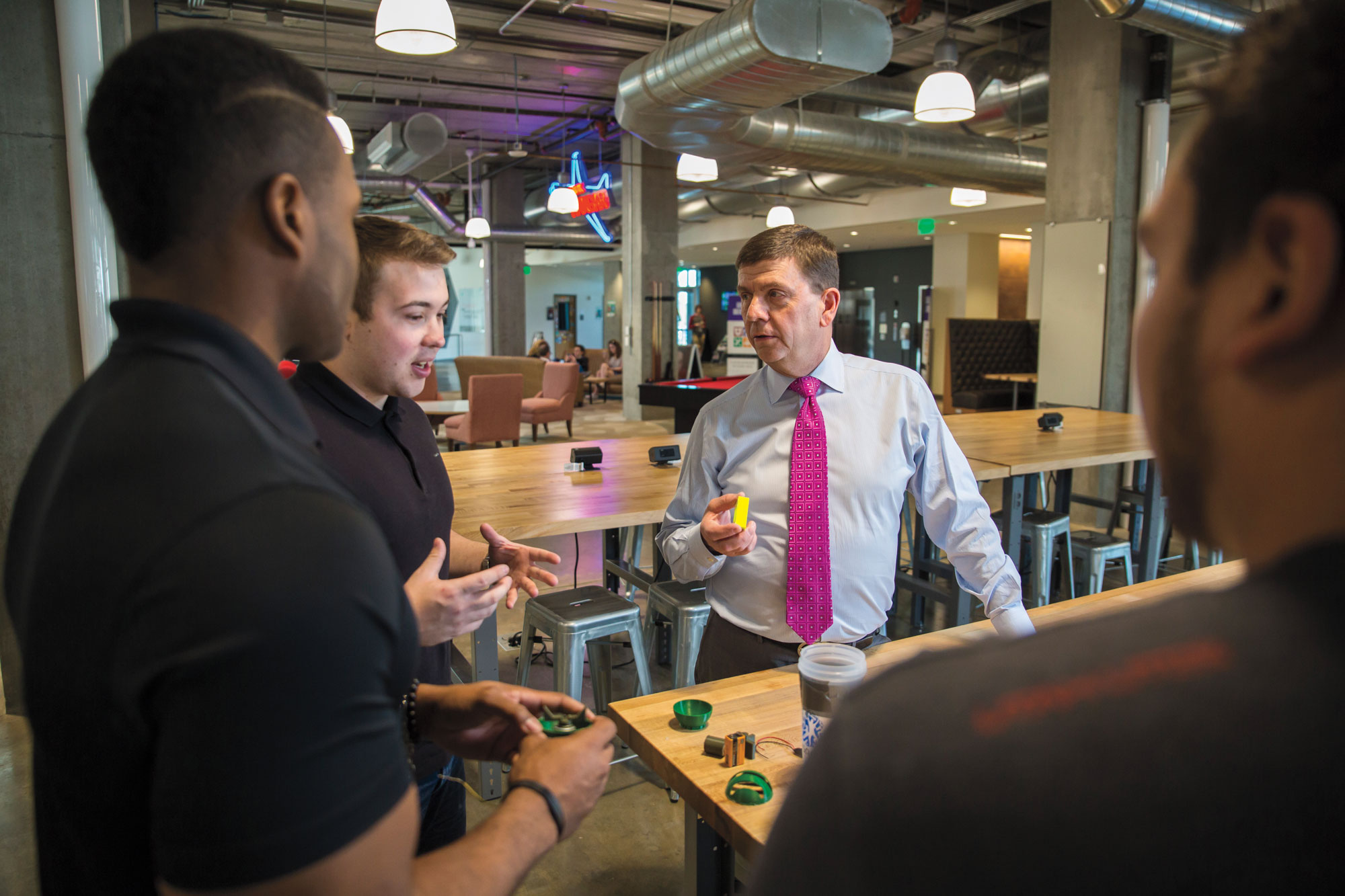 Troy D’Ambrosio confers with students at the Lassonde Institute.

The approach is attracting students and faculty who might not previously have considered the U. It’s also drawing interest from corporations looking to partner with campus-based inventors and bringing in additional research dollars. “We’ve been a part of very large grants from the National Science Foundation, the

National Institutes of Health, and the Department of Energy, because as we’ve gotten better at translating faculty technology ventures out into the world, we are able to say, ‘We can do that commercialization piece,’” D’Ambrosio adds.

The cross-disciplinary idea sharing also appears to be increasing the number of innovative technology ideas percolating on campus, particularly since the Lassonde Studios launched, D’Ambrosio says. In its first year, the $45 million studios launched some 300 companies—many of them producing new medical devices.

Some Lassonde-based teams have been able to capitalize on collaboration in ways that have shortened the runway from prototype to product. At least one brought its invention—an inexpensive tool for cervical cancer screenings—to market in about 18 months. That’s far faster than the industry standard of seven years, says John Langell MBA’13, an associate professor of surgery at the U and executive director of its Center for Medical Innovation.

For his part, Runnels says his Through the Cords endeavor would not likely have been possible were he living and working in any other place. At each step in the process—from the department chair who granted him a teaching sabbatical, to Lassonde, TVC, and the relationships the U has with state economic and business leaders—Runnels says he found support and enthusiasm for his vision. “Most places, it’s all window dressing, but here it’s actually happening,” he says. “This is such a privilege to be at an institution where I can do this. I just feel lucky.”

Of course, not every U invention will make it to market like Through the Cords’ tool. In reality, only a fraction—less than 10 percent—says Marmer. Still, the U manages to launch between 10 and 20 companies annually. “As a university and a single entity, that’s probably more than anyplace else in Utah,” Marmer adds. Not all are life science-related endeavors, but the medical school historically outpaces other U schools and colleges in the number of annual invention disclosures—977 since 2013—and those make up about two-thirds of TVC’s total work.

U successes in the life sciences industry are also driving something that Marmer says might be just as important as funding: buzz. “Increasingly, there’s a reputational value,” he says. “There is a lot of importance to that, even if it’s just that potential industry partners will want to work with us more because they see us doing the work.”

That buzz is drawing visits from educational institutions worldwide who are looking to replicate U programs on their own campuses, as well as from venture capitalists like Victor Gatto of Tennessee, who routinely tracks innovation at universities, looking for his next investment.

Gatto says he was reluctant to visit Utah about two years ago after he was invited by an investor who was also a U grad. The school, he says, just wasn’t on his radar screen. “I was really blown away,” says Gatto. “Every other university I know is much more siloed. What’s really unique about Utah is its partnerships and the willingness to work together, share creativity, and solve problems.”

Such stories make D’Ambrosio nod his head. “We hear that from people time and time again who visit our programs,” he says. “And usually they say, ‘We’d never be able to do that at our campus, because we’d never get people to play along.’ ”

The U’s Technology & Venture Commercialization office has been helping push campus-based innovation into the marketplace since 1965. Here’s a look at a few life sciences companies and their products and technologies that have the power to improve health care and change lives:

Larada Sciences: Makers of the AirAllé device, which delivers a 30-minute single treatment that kills head lice and 99 percent of lice eggs.

XEnd Medical Systems: Creators of the patented XEnd Needle that is designed to reduce infections from hypodermic needle injections and speed up the identification of sepsis-causing bacteria.

Veritract: Developers of a feeding tube with integrated optics and a steering function that allows for the more precise placement of feeding tubes in patients to prevent complications that can lead to death.

One thought on “The Bioscience Boon”