Five innovations at the U that may significantly impact their respective fields. 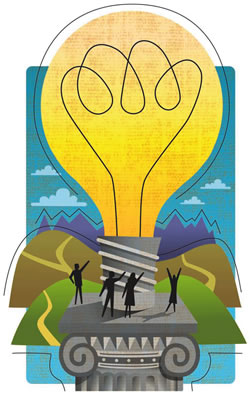 ~The Foundry: Entrepreneurs are made, not born:

What is The Foundry? It isn’t an incubator, although it has helped give birth to 22 companies. It isn’t an economic development agency, although as of December 2010 those 22 companies had created 19 full-time jobs and generated more than $730,000 in revenue. And it isn’t a manager trainee program, although the 85 who have participated so far have acquired the necessary skills for running a company.

What The Foundry is, is novel and highly effective, for it achieved those results since its inception in the spring of 2010, and its founders say that the model can be repeated anywhere.

“The Foundry springs out of the initiative of the David Eccles School of Business to rethink entrepreneurship education, and to do so through experience-based education,” says Robert Wuebker, a postdoctoral fellow and faculty adviser. “People learn best when information is provided to them in context, when you put them in positions when they’re at risk to learn.”

The Foundry uses a peer-based approach in which participants meet regularly to brainstorm and help each other troubleshoot as they each start up companies.  The Foundry meets in space that the Eccles School rents in the Salt Lake Chamber of Commerce Building. Adding to its unconventionality, it accepts applications from “anyone, anywhere,” Wuebker notes. That means student or nonstudent, from any school or no school, from within Utah or without. Further, it transposes the traditional belief that entrepreneurs are born, not made. “If you’re interested, it is likely that you will start a business in my classroom,” Wuebker says.

And, Wuebker explains, The Foundry was designed to be scalable, or repeatable—unlike traditional experience-based education situations, which tend to be personality-driven.

“That’s the real breakthrough,” Wuebker notes. “You can take this very same idea and you could do it somewhere else.”

University of Utah Community Clinics: The other half of health care reform 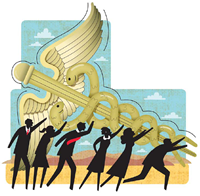 Through redesigning how they deliver care, the University of Utah Community Health Care Clinics are playing an increasingly prominent role in health care reform—so much so that the clinics host “learning days” when the likes of Kaiser Permanente and other large health organizations can come see how it’s done.

“We’re unusual as an academic health center in having a large network of practices implementing our version of Patient-Centered Medical Home (PCMH), using it as basis for teaching future physicians and conducting federally funded research to advance it,” says Michael Magill, M.D., executive medical director of the U’s Community Clinics and chair of the U’s Department of Family and Preventive Medicine.

PCMH is a team-based model of care in which a primary physician coordinates an individual’s health care needs, with a focus on preventive care. It represents a paradigm shift in the provision of health care services, from volume to value, driven by continually escalating costs.

“Broadly stated, health care reform is needed to reduce the cost and increase the quality of American health care,” Magill says. “The recent health reform bill focused mainly on one side of the equation: increasing the number of people with health insurance. The other side, equally important, is to change how we deliver care, starting with bolstering primary care.”

A handful of grants are helping the clinics lead the way. For starters, they’re enabling the hiring of what are called nurse care managers, who visit patients with chronic illnesses to ensure that they’re getting proper care and treatment to prevent further complications. Down the road, the clinics will focus on preventing chronic illnesses in the first place. “[These grants] are really going to kick us into high gear,” Magill says.

University of Utah Seismograph Stations: Silence can be detonating 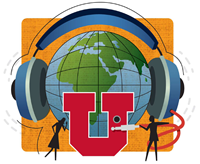 There’s been an explosion of interest in infrasound research at the University of Utah Seismograph Stations (UUSS), and the Comprehensive Nuclear-Test-Ban Treaty (CTBT) is to blame.

“Our [U.S.] Senate has not ratified the CTBT partly because the scientific community could not convince the politicians we could monitor it,” explains Kris Pankow, a research associate professor of geology and geophysics at the U and a UUSS staff scientist. Thanks to research on which she collaborates, she says, “As a scientific community, we’re getting closer and closer to saying we think we can do this.”

The UUSS is in a unique position to study infrasound, defined as sound below the range of human hearing. Since 2006, the station has placed nine infrasound monitoring arrays in various locations throughout Utah. Three of these arrays are located near where the military destroys explosive ordnance on the west side of the Great Salt Lake—as perfect a real-world laboratory as a scientist could hope for. Outside of South Korea, which monitors the testing activities of its neighbor to the north, Utah is the only place in the world to have such an integrated network of these monitoring arrays.

Pankow notes that infrasound research has lagged behind seismology over the years, so there’s much work yet to be done. A crucial need is to learn to distinguish between an underground nuclear explosion and an earthquake, for example.

“Infrasound is such an old science, but there’s so much left to do, especially with new techniques,” Pankow says. “Who knows where you can go with this data if you start processing it in certain ways.”

Technology Venture Development: The university as an engine of economic expansion 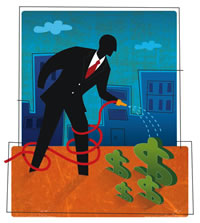 It’s long been understood that institutions of higher education contribute to economic development by, essentially, training and graduating knowledgeable employees-to-be year after year. An educated workforce is a vital component of a healthy economy, after all. Increasingly, however, universities, especially those that are tech-savvy, are being seen as capable of contributing far more to the economy. The problem, according to University of Utah Vice President Jack Brittain, is that most universities don’t know how to do it.

The U, in this regard, is unlike most universities. And by at least one measure it exceeds every other university in the country, including the venerable Massachusetts Institute of Technology: In 2009, according to the most recent data available, the U was responsible for launching 19 companies—versus MIT’s 18—based upon technologies developed at each institution. And the U accomplished this with roughly one-fifth of MIT’s research budget.

A former dean of the David Eccles School of Business, Brittain now oversees the U’s Office of Technology Venture Development, which supports the development and marketing of new U-bred technologies. He’s been hosting so many visits by other entities wanting to learn the U’s secret—Purdue, Stanford, and even Norway’s Ministry of Education, to name but a few—that he has called a moratorium. “We’re exhausted right now,” he says with good cheer. “We need a little time to focus on what we’re doing.”

Brittain and his team have plenty to focus on, notably the development of a regional network of schools. Called the Western Innovation Network and funded by a National Science Foundation grant, it will allow affiliated schools to collaborate by sharing limited resources.

“If we can get all the universities in the West [on board], we’d have over 400 startups a year,” Brittain notes.

Colleges of Science and Education: Meeting of the minds

For years, educators have fought over how best to teach science and mathematics to American students. “The controversy centers upon what is really essential: the pedagogy or the content,” explains Hugo Rossi, professor emeritus of mathematics at the U. “Colleges of education and colleges of science have been at odds about that.”

Perhaps no longer. The U’s Center for Science and Mathematics Education, of which Rossi is acting director, was established with the understanding that pedagogy and content    are equally essential and best taught in partnership. Launched in fall 2009, the center is a collaboration among the College of Education, the College of Science, and local school districts, which benefit from the center’s teacher-training programs.

For a center that doesn’t yet have a home—it’s waiting for the Utah Museum of Natural History to move from its Presidents Circle location­—progress has been swift. It took over the reins of the Salt Lake Valley Science and Engineering Fair from The Leonardo; was named a Math for America site, through which it will help develop secondary-school math teachers from the ranks of recent college grads and mid-career professionals; and has seen its budget grow from $50,000 to $1.5 million. The center also routinely hosts lectures on issues related to mathematics and science.

Not a bad performance by folks traditionally at odds.“The key to everything we’re doing is collaboration,” Rossi says. “We disagree, we have confrontations—but there’s a level of mutual respect and concordance of what the goals are that really gets things done.”