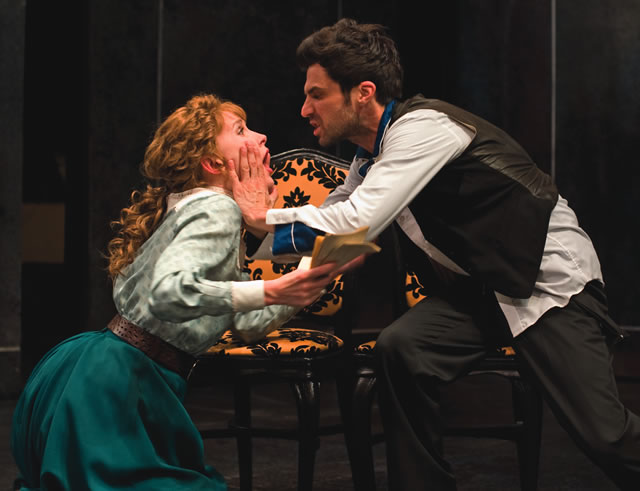 Pioneer Theatre Company’s skilled craftspeople have more than a few tricks up their sleeves.

~ Pioneer Theatre Company (PTC), the U’s resident professional theater, has been exciting, educating, and entertaining audiences for almost 50 years. This year, PTC kicked off its season in September with Shakespeare’s Hamlet. When the curtain opened, the efforts of a talented behind-the-scenes collection of artists took center stage—as they do with every production. Creating another reality is a bit like magic, requiring collaboration and coordination from all involved to make it believable.

Here, we take a peek backstage at the magicians who collectively pull the rabbit out of the hat at each and every performance. 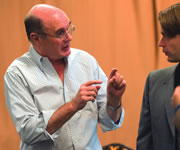 Charles “Chuck” Morey
Title: Artistic Director
Years with PTC: 26
What he loves about his job: “The collaboration with other people. What we do is a team sport. Everybody makes significant contributions and will sometimes define a project in ways you never conceive of. And that’s exciting.”

Chuck Morey got involved in theater in a roundabout way: to hone his writing skills. As a high school student, Morey wrote what he calls “a couple of really, really bad one-act plays.” To help things along, one of his mentors suggested that he “go to college, be in a play, hold a spear, hang lights, and build scenery” in order to discover how a dramatic event happens.

Morey did, and he was hooked. “Turns out the theater department had the best parties,” he says. “So I kind of stuck around and got seduced.” He graduated from Dartmouth and then attended Columbia’s MFA acting program.

In 1981, while living in New York City, he got a call “out of the blue” asking if he wanted to guest direct a production for PTC. “Yes,” he said, and then did that for three years in a row. “Then they asked me if I’d be interested in taking over as artistic director,” Morey explains. “My wife and I thought, Well, this will be interesting for a couple years. Twenty-six years later, I’m still here.”

In addition to guiding the theater’s overall artistic vision, Morey directs several productions a year, including this season’s opener, Hamlet. Although he had worked on the play for more than six months by the time it opened, you couldn’t find him basking in its success; two days later, he was in New York, casting the next show. 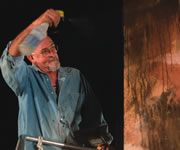 Warren Gerritsen BFA’84
Title: Charge Artist
Years with PTC: 30
What he loves about his job: “It’s always different. Every show is its own project. Every show has its own problems and solutions.”

Late this past summer, Warren Gerritsen was working on three productions at once, custom mixing each shade of paint to coat the faux-steel beams on the Hamlet set, the towering rock columns that would dress up Dracula, and the massive, 1,600-square-foot backdrops—which Gerritsen makes by hand from raw muslin—to be used in White Christmas. His job requires that he wear many hats, but evidently he needs just one pair of shoes: the sneakers on his feet are barely visible through countless layers of paint.

Gerritsen served in the Army infantry as the Vietnam conflict was winding down. He used his GI money to attend trade school, where he learned carpentry, cabinet making, and blueprint reading. He eventually went on to receive a BFA in art with a theater emphasis from the U. In 1980, he started at PTC as a part-time painter; he has been the charge artist since 1984. (A charge artist oversees a crew of journeymen scenic artists, interpreting the scenic designer’s technical drawings and transferring them onto the scenery.)

If he’s not at the theater, Gerritsen is probably in a pottery class, or at his cabin near Hanna, Utah, where his great-great-grandfather homesteaded upon arriving in a handcart company with other Mormon pioneers. 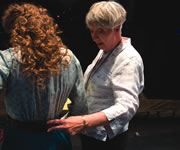 Carol Wells-Day
Title: Resident Costume Designer / Costume Shop Supervisor
Years with PTC: 25
What she loves about her job: “No two shows are ever the same. You get a really nice variety, and you meet a lot of people.”

Carol Wells-Day started in theater as an actress, but she found her true calling while working in a costume shop one summer. She had always enjoyed sewing, and the experience convinced her to pursue costume design.

Her skills were put to the test preparing for Hamlet, where she literally outfitted an army. “Hamlet, like much of Shakespeare, is heavy on men,” she says. “The challenge [for me] is to dress an army so that it looks like an army and still leave me time to [make costumes for] the rest of the show.”

Wells-Day attends the fittings for every actor in a given play. If she’s building a costume from scratch, the actor will have two or three fittings per costume. The lead playing Gertrude in Hamlet wore eight costumes, which required eight hours of fittings.

And what does a costume designer do in her spare time, when she finally gets a break from the fabrics and the endless stitching? “I’m taking classes on doing appliqué quilts,” she says. “It’s very relaxing, and it’s different from what I normally do.” 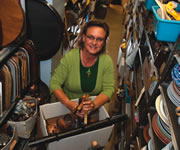 Marshelle “Mars” Spafard BFA’79
Title: Props Artisan
Years with PTC: 10 (plus four as a student in the 1970s)
What she loves about her job: “It’s a constant learning experience. I’m always stretching myself. I get to use all of my skills, and I get to learn new ones as well.”

Mars Spafard turns a key in a narrow closet door and, without warning or ceremony, swings it open for her unwitting guest. There on the floor appears to be a dead body—a woman in a white dress, her face covered with fabric. A cardboard box, spilling over with freshly printed money, lies at her feet. The room around her holds a cache of weapons large enough to equip an army.

It looks like a crime scene. But it’s actually part of a gallery of Spafard’s finest work. She calmly steps over the “corpse” and begins showing off a culinary feast—a tray of burritos stacked in a pyramid, a hubcap-sized loaf of bread—that she made out of insulating foam from spray cans (normally used to insulate windows and doors).

Spafard’s skills run the gamut from carpentry and upholstery, to sewing and graphic design. One moment she’s rigging up a grave for the aforementioned corpse (Hamlet’s Ophelia), and the next she’s printing authentic-looking period newspapers.

Away from the theater, Spafard has a passion for eco-art, which involves turning recyclables into sculptures and wearable art. 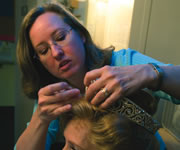 Amanda French
Title: Wigmaster / Hair & Makeup Designer
Years with PTC: 9
What she loves about her job: “First, I really enjoy working with the actors to create characters. Second is being able to share this skill with my students.”

Amanda French attended the University of Cincinnati’s College-Conservatory of Music, where she studied under Lenna Kaleva, who helped create one of the premier makeup and wig design programs in the U.S. French recalls an acting coach saying, “You know, you’re so happy when you do things backstage.” French took that as a polite way of recommending a career out of the spotlight. “And she was absolutely right,” says French.

Her career includes 10 years as the head of hair and makeup at the Utah Shakespearean Festival, where, she says, she got more than enough experience dealing with fake blood. “I’ve been there and back with severed heads,” she laughs. Pointing at a nearby shelf she adds, “There’s one in the box if you want to see it.”

For Hamlet, French created 11 wigs (using both artificial and real hair) and four sets of facial hair. And she’ll be perfectly happy if you never notice her hard work. “I feel like I’ve done my job particularly well if you have no idea that the person is wearing a wig.”

Besides her backstage duties, French is in her second year as an adjunct professor at the U, allowing her an opportunity to pass on her craft to another generation. “That’s been extremely rewarding. I love it.” 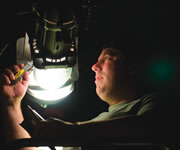 Alex Weisman
Title: Master Electrician
Years with PTC: 4
What he loves about his job: “We have a thousand people who come in every night to see a show, and whether they realize that there’s all this work that’s gone into it or not, if they walk out having enjoyed what we put together, that is really the biggest reward.”

Alex Weisman had just finished working as a stage manager on a cruise ship in 2006 when PTC called to offer him his current position. He was thrilled, except for one problem: Having been at sea for six months, Weisman had forgotten that he had applied to PTC. After hanging up the phone, he had to go online and figure out where his new employer was located.

Originally from Boston, Weisman graduated from Ithaca College in New York with a degree in theater production. For any one PTC production, he and his crew hang upwards of 400 lights, adding color and patterns according to the lighting director’s concept. They then must focus each fixture, one by one, so that it spotlights the right person or object on stage. Finally, Weisman programs the lighting cues into a computer.

When not hanging from the rafters, Weisman gets in about 50 ski days a year—fringe benefits for working in the evenings, he says. He’s also a scuba diver and a skilled photographer (he does the production stills for PTC). In the off season, he works at a summer camp for kids in Maine.

—Brett Hullinger is a freelance writer living in Salt Lake City. He is a frequent contributor to Continuum.