Tim Garrett and a friend went skiing one day during a Washington snowstorm. They were sitting on the ski lift when the friend, a meteorologist, pointed out how abruptly the snowflakes that were landing on their ski clothes changed shape and size. Garrett, who was then a graduate student in atmospheric physics at the University of Washington, hadn’t thought much before about the crystals’ variations. But the moment of realization stuck with him in the following days. “I remember being on the lift and thinking how cool, how great it would be to study snowflakes in a ski resort,” says Garrett, who is now an associate professor of atmospheric sciences at the University of Utah.

As a graduate student, Garrett had already participated in a large study of snow and ice crystals in the Arctic, with a group of scientists based in Barrow, Alaska. They had gathered data on clouds that they observed from the air in a turboprop that flew hundreds of miles over the Arctic Ocean from Barrow to a Canadian research icebreaker. The experience became part of Garrett’s doctoral thesis on how ice crystals and snowflakes interact with light, and how those processes can help determine how much solar radiation is reflected back into space. 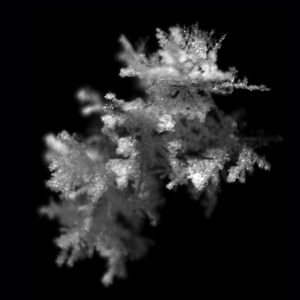 This snowflake’s rounded shape is due to riming. (Photo courtesy Tim Garrett)

Garrett did a two-year fellowship at Princeton University after graduate school and then came in 2002 to the University of Utah, where he soon realized that an outdoor laboratory and reams of data were for the taking in the big mountains right up the hill. “I can’t not try to pursue this while being next to the Wasatch Front,” he thought to himself.

Eventually, with the help of his U colleague Cale Fallgatter MS’08, a mechanical engineer, Garrett designed a camera to shoot three-dimensional photos of snowflakes. With support from the University of Utah’s Technology Commercialization Office, the two scientists then created Fallgatter Technologies to develop and build their Multi Angle Snowflake Camera. Their prototype took its first images during a storm at the Alta Ski Area on April 30, 2011.

Since then, Garrett, with help from Daniel “Howie” Howlett, an avalanche specialist with the Alta Ski Patrol, has set up two permanent research cameras at Alta, one at the main ski-lift base and the other in Collins Gulch farther up the mountain. Garrett says snowflakes— which, it turns out, only very rarely resemble the symmetrical crystals most of us think they are—deserve study in their own right. But his research with the cameras also contributes to grander study of clouds and global warming.

Garrett grew up in Nova Scotia, Canada, where even as a young student he was intrigued by the physics of ice. It probably helped that his father is an oceanographer. (Garrett’s parents were both British citizens, and his mother was a social worker.) Garrett also learned to play the oboe while in school, and when he went on to the University of Waterloo in Ontario, he was allowed to include music studies while pursuing his bachelor’s degree in physics and performed with professional groups both as an undergrad and in graduate school. But he decided to make atmospheric science the focus of his career because being good at science is easier than being a successful musician, he says. He still sees parallels, though, between music and physics, and the pathways of falling snow that he charts with his cameras at Alta.

The art of photographing snowflakes reaches back to the 19th century. A Vermont farmer, Wilson Alwyn “Snowflake” Bentley, at the age of 19 in 1885 attached a bellows camera to a microscope to take the first-ever photograph of a snowflake. In 1936, Ukichiro Nakaya of Hokkaido University created the first artificial snow crystal. Four decades ago, scientists in the Pacific Northwest’s Cascade Range spent two years hand-collecting individual snowflakes, placing them on slides, and then taking black and white pictures of the crystals in optimal photographic light. Many of the resulting 100 images were what we think snow crystals look like—perfect, symmetrical, six-sided. Kenneth Libbrecht, a physics professor at the California Institute of Technology, has sought to understand the molecular dynamics of ice crystals and has developed methods to grow and analyze snowflakes in his lab. 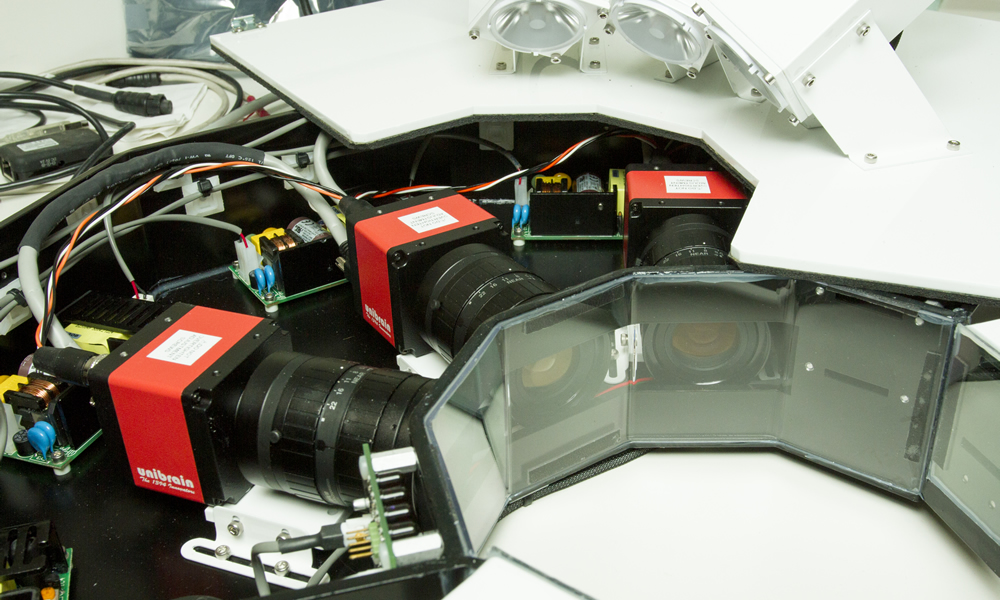 The Multi Angle Snowflake Camera, developed by Garrett and Cale Fallgatter, took its first images at Alta in 2011. (Photo by Nathan Sweet)

But no one, until Garrett and his colleagues set up the cameras at Alta, had ever before taken thousands of high-resolution, three-dimensional photos of snowflakes in a single night, untouched as they fall from the sky.

Garrett’s 3-D cameras are mounted on a ring-shaped housing about 12 inches in diameter, with lenses aimed to capture the flakes as they fall through the ring. Motion sensors tell the cameras when to shoot, at a shutter speed of 1/25,000th to 1/40,000th of a second and with three LED flashes. The multi-angle camera array takes only black-and-white images, because color photography would block some light.

Garrett’s research location at Alta includes a radar, located at the base of the hill. Researcher Sandra Yuter of North Carolina State University tracks data from the radar remotely to measure precipitation structure. Garrett uses her data to help determine how tall and strong a storm is and how the precipitation changes over time. Weather forecasters can then incorporate that information with their own radar readings to determine whether snow or graupel (also known as soft hail) is falling, and if so, how much. 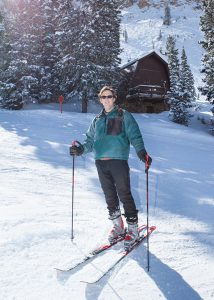 Tim Garrett has two cameras set up at the Alta Ski Area, one at the base and the other in Collins Gulch. (Photo by Derek Smith)

In late 2011, the U.S. Army purchased one of Fallgatter Technologies’ Multi Angle Snowflake Cameras for its Cold Regions Research lab at Mammoth Mountain, California. The U.S. Department of Energy bought one for climate studies at Prudhoe Bay, Alaska, home to the largest oilfield in North America. Vanderbilt University also has ordered one to be deployed to the NOAA Earth System Research Laboratory at Greenland Summit, the center of the Greenland ice sheet. Garrett says both orders will be filled by the end of 2013. And the National Science Foundation is now funding his research.

The cameras automatically collect the myriad snowflake images. But only about one in 1,000 matches the perfect snowflake icon, Garrett says. In fact, a photo gallery of snowfall at Alta displays flakes that may look like beads, popcorn, a canine tooth, sea sponges, coral, seashells, or Styrofoam packing pellets.

Garrett says snowflakes usually aren’t single crystals at all. Rather, they may be rimed as millions of water droplets collide with a flake and freeze on its surface to form graupel. Or the water droplets may collide with other snowflakes to form aggregate, which under the right conditions turns into world-famous Alta champagne powder.

The flakes’ water content determines their shapes and where the prevailing wind sends them. Warmer weather means more moisture in the air. That changes in midwinter. “One thing we see very often in the Wasatch Front in January and February is very light and fluffy snow,” Garrett says. 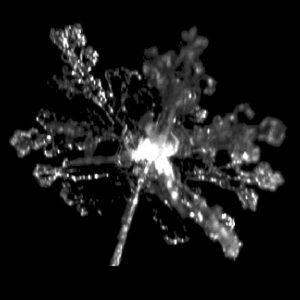 Working to improve computer simulations of falling snow and how it degrades radar transmissions, Garrett studies how snow behaves in clouds. That research can help improve weather forecast accuracy. Meteorologists and hydrologists can use the information to make morning commute predictions, provide information that contributes to avalanche safety, and even evaluate how much water is flowing in the Colorado Basin, the lifeline for more than 35 million people in the West.

Randy Julander, Utah Snow Survey supervisor with the U.S. Natural Resources Conservation Service, says Garrett’s work will help him see more closely where snowfall transitions into rainfall. Utah stream flow comes when snow melts after being kept in the mountain deep-freeze and accounts for 90 to 95 percent of the water that flows through the West. Should global warming change the West’s hydrology cycles to “rainfall-dominated events,” Julander says, the Colorado River and its tributaries will starve and our reservoirs will go dry.

Understanding the snow load in the mountains also affects public safety. Karl Birkeland, director and avalanche scientist with the U.S. Forest Service’s National Avalanche Center in Bozeman, Montana, says photos from the Fallgatter Technologies cameras could help snow-safety experts anticipate what they might see when they dig snow pits. “There’s some real potential there to translate the images” to gauge the snow properties and how an avalanche might occur, he says.

For his own inquiries, Garrett extends his snowflake research to the science of global warming through his study of clouds. Cloud physics, he says, remains rather mysterious. Scientists know the basics: Clouds remove pollutants from the atmosphere and shield Earth from sunlight. They can also trap heat to warm the planet. 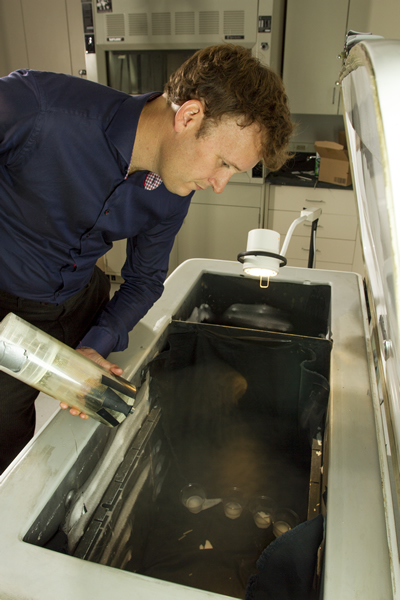 Tim Garrett works to create snow crystals in his laboratory in the William Browning Building. (Photo by Nathan Sweet)

But studying the physics of clouds is crucial for making weather and climate forecasts. Clouds and precipitation are constantly changing, of course, and Garrett says their role in climate change can be either fundamentally simple or impossibly complex. He himself refers to clouds as “ephemeral beasts.” Garrett predicts significant regional changes in weather patterns will occur in the years ahead: few clouds, and little precipitation. Julander notes that the lack of sufficient clouds has already thwarted cloud-seeding efforts in Utah during dry periods when snowstorms were most needed.

Garrett has used data collected by weather stations, satellites, and aircraft to examine the effects of atmospheric pollution on snowfall, ice crystals in cirrus clouds, and sea ice in the Arctic. He also relies on his own cloud-gazing to gather information. Then he looks at his findings from unusual angles, and some of his conclusions have included grim news about climate change, including global warming. “It’s pretty safe to say that without an economic collapse, global carbon dioxide emissions will continue to grow unchecked” Garrett says.

Meanwhile, Garrett continues his study of how snowflakes fall, and their effects on larger weather patterns. Before his cameras caught snowflakes in free fall, he says, he had no idea of their immense variety. Now anyone can go online to see the view from his cameras and watch in real time what kind of snow is falling and how fast. What they also can see is that snowflakes are far beyond the simple shapes children cut out of paper.

“Why is it we have such an ingrained belief in that? When they land on our sleeves, they are crazy irregular,” he notes. Nature is far messier than many of our received conceptualizations of it, he says, “but beautiful, in a different way.”

—Patty Henetz is a longtime journalist who now works as a freelance writer based in Salt Lake City.

6 thoughts on “A Snowflake’s Significance”