The new Frederick Albert Sutton Building serves as a symbol for campus sustainability and didactic construction. 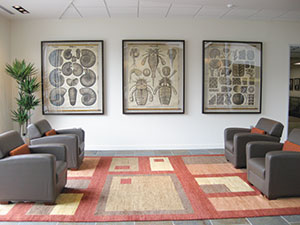 Briquelle, a fourth-grader at Salt Lake City’s Ensign Elementary School, is on a field trip to the University of Utah campus to visit the Frederick Albert Sutton Building, which houses the College of Mines and Earth Science’s Department of Geology & Geophysics. Leading the field trip is Ian Semple, a U of U graduate student in geology. He brings students to the Sutton Building “to get them excited about rocks, fossils, and plants,” and of course, he says, “to get them excited to come to the U.”

Briquelle’s enthusiasm is typical of many who enter the Sutton Building—and stop in their tracks. Is it an art gallery or a museum? The round entry with a broad band of glass that brings in the sky suggests the earth itself. And the Precambrian slate floor, with river rocks winding through it like a stream, grounds visitors in a material world, though not the one Madonna sang of.

The Sutton Building, dedicated in 2009—the first LEED-certified (Leadership in Energy & Environmental Design) new construction on the lower campus—has set a new standard for sustainable buildings. Thanks to a team of imaginative earth scientists, it has also redefined the role of a campus building in general, making it a dynamic platform for learning.

A Team of Explorers

By the 1990s, the Department of Geology & Geophysics had outgrown the 1927 Mines Building, in terms of not only space—faculty, administration, and students were scattered across campus—but also of technology.

The Rev. Marta Sutton Weeks, the daughter of Frederick Albert Sutton BS’17, wanted to remember her father and honor future geologists with a building that would create the kind of community she had experienced as a student. Weeks donated more than $12 million in gifts toward the eventual $27 million cost of a new building and joined the geoscientists in the adventure of creating a structure that would bear her father’s name.

Adventure is nothing new to Weeks, an Episcopalian minister. Her father, an engineer whose passion was geology, led a life worthy of Indiana Jones. The family had lived in Argentina and Chile, and was separated for many years while Sutton rode burros and camels through the mud and dust of Bolivia, Tibet, and Mongolia in search of oil. Marta was born in Argentina and grew up in Venezuela and Utah. After graduating from Stanford, she married a petroleum geologist, Austin Weeks.

The faculty members who oversaw the fundraising for and the design and construction of the building, Frank Brown and Marjorie Chan, matched Weeks in terms of spirit, sense of exploration, and generosity. Both are professors who challenge the status quo in their research—Brown, here on earth, and Chan, in space—and who feel a deep passion for their fields and for the U.

Brown, dean of the College of Mines and Earth Sciences, is a geochronologist who was on the 2001 expedition with Maeve Leakey that uncovered the skull of Kenyanthropus platyops, or “flat-faced human from Kenya,” older than the famous “Lucy” unearthed in Ethiopia in 1974.

Combine this leadership with a discipline that, in Chan’s words, “has a central role in bringing about a sustainable society,” and add to it a once in a lifetime building opportunity, and it is not surprising that the result was, in a word used by many of the students, awesome.

The University hired as architects Brixen & Christopher and Coopers Roberts Simonsen Associates. Their mandate was to design a 91,000-square-foot, four-story building that would connect to the existing 1970s-era Browning Building and be solid enough to house the University of Utah Seismograph Stations (UUSS).

The next step (that of creating a steering committee of building users, administration, and members of the design and construction team) was not novel—it is routine on all University construction projects—but the ideas that came out of it were.

First, the steering committee upped expectations in terms of sustainability. University construction, at the time, was required to follow only State guidelines established primarily to promote energy savings and efficiency. The department wanted more.

“We are studying the earth, its environments and resources, and the balance of systems,” says Chan. “Geologists understand the interactions of climate change. If we are looking to the future, earth scientists are the ones who have the perspective of ‘deep time’—time scales of hundreds of millions of years.”

Brown went to Weeks, somewhat hesitantly, to ask for her support to achieve LEED certification. Weeks’ response? “That’s what I had hoped for all along.” In fact, she encouraged them to seek the gold level of certification, the second most difficult of the three levels (achieved by points earned via sustainability efforts in the design and construction process). [Ed. Note: In early September 2010, just after this issue went to press, the College of Mines and Earth Sciences received official notification that the Sutton Building had received gold-level LEED certification.]

Chan also aimed high in terms of the educational value of the building’s interiors. Department faculty David Chapman and Barbara Nash helped craft a request to the University administration, which granted $275,000 toward interior basics, and the college’s development director, John Kaloudis, assisted Chan in raising another $700,000 in cash and in-kind donations to integrate more displays and teaching elements into the building.

Chan retained Diamond Phillips Architecture & Design, which came up with many of the building’s most striking features, including a river motif that brings a dynamic element to the structure, reinforcing the evolving nature of the earth and the role of rivers in carving out Utah’s landscape. A creek bed of stylized river rocks appears to flow into the interior, meander through it, and flow out again.

The entire north wall, designed by John Diamond, is decorated with a school of 104 real Eocene-age (50-million-year-old) fossil fish swimming toward the lecture hall. Around the corner, laid out with the care of a mosaic, are 150 rare carbonized plant fossils, also Eocene, so delicate that they look as if they could blow away.

William Johnson, professor of geology and geophysics; Fred Montague, recently retired professor of biology; and Steve Burian, associate professor of civil engineering, “turned the building design into a community project,” says Johnson. The three tossed a class on sustainability into the campus’s course offerings just two weeks before the Winter 2007 Semester began. To their amazement, 40 students signed up, likely inspired by the blossoming campus interest in sustainability led by the student group Sustainable Environments and Ecological Design (SEED), which, in 2007, successfully lobbied the University to establish an Office of Sustainability. 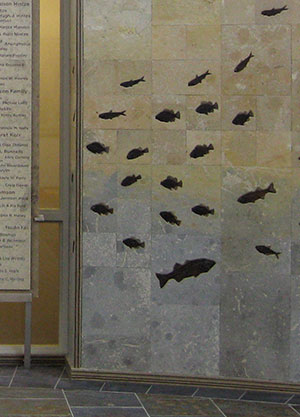 The entire north wall, designed by John Diamond, is decorated with a school of 104 real Eocene-age (50-million-year-old) fossil fish swimming toward the lecture hall.

In the class, students presented ideas, and the architects responded with practical answers. The students saw their ideas bump up against building codes, and financial and aesthetic constraints (composting toilets were a tough sell). “For students pushing a particular project, it was an excursion into the real world,” says Johnson.

Ultimately, a number of student proposals were incorporated into the design: solar tube lighting, a porous concrete loading dock that allows water to percolate into the subsurface (rather than propagate via storm drain to the Great Salt Lake wetlands), a rainwater collection pond, covered bicycle parking, xeriscaping, low-emission glass that reduces heat loss, a rooftop garden, and a flat screen in the entry area that monitors energy use in specific campus buildings.

Now called Sustainability Practicum, the class is expected to be a permanent campus offering.

Throughout the building, Diamond Phillips incorporated elements that serve both decorative and pedagogical purposes. Metaconglomerate stone slabs are hung with curatorial care as works of art. Petrified wood encourages touch and exploration.

“We are always fascinated by nature,” says Chan. “Nature is an artist that has created amazing things. When you present geology as art, people want to know more.”

Interactive features offer that opportunity. Only the rare visitor can resist jumping on a floor tile that records the jolt as a “seismic event” on the lower floor’s earthquake monitors. On the third floor of the building, small magnets invite discovery of layers of magnetic minerals in an ironstone slab.

Abby Rudd BS’07, now a graduate student in geologic engineering, notes that the many displays and rotating posters of student research enhance learning. “You get a sense of what others are doing, from paleontology to geophysics to water chemistry. You might not have realized the variety of work before.”

A Sense of Community 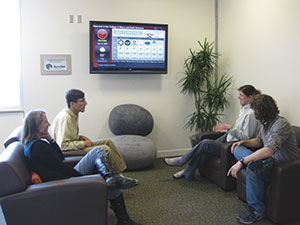 Matt Heumann, the student representative on the display committee, says, “The students are very pleased with the way the building turned out. They like that there are informal meeting areas for those who want to talk, and quiet offices for when you don’t want to be disturbed.”

“The alcoves are really cool,” adds Rudd. “We have awesome lab facilities here, much bigger than in the old building, and with windows.”

According to Professor Erich Petersen, former associate chair of the department, “The building has brought everyone closer. It has a feeling of community, which is what we wanted. We all take a lot of pride in it. You want to be here.”

Wednesday mornings, the whole department is invited to grab a drink at the espresso bar and talk about their work. Rudd says that this fosters a greater sense of community and makes it easier to get to know people.

The Sutton Building, according to the Utah Chapter of the U.S. Green Building Council, “is serving as the University’s icon for ‘Green building design.’ ”

The success of the building is sending ripples throughout the campus. Its use of xeriscaping has spread. And, since 2009, every new building on campus will seek LEED silver-level certification, says Michael G. Perez, the U’s associate vice president for facilities. “They really had a vision,” he says of the Sutton Building team, “and it was really successful. We are taking that success to other buildings. It’s an opportunity to make buildings of even greater value to our campus.”

Petersen points out that the number of students who have signed up for his basic geology class over the last few years has doubled. In the fall of 2010, he will have his biggest class in 25 years. “The building has helped a lot in increasing enrollment,” he says, “Now that we have everyone together, it keeps the energy high. The building is a big part of the increased student interest.”

Petersen may have to order more chairs. Ten-year-old Briquelle has gone through two pencils filling up the pages of her scientific notebook. Her classmate Britannia Raynor has already labeled her notes “U of U,” using the appointed bold font with serifs.

“The whole village concept really worked on the Sutton Building,” says building designer John Diamond. He especially credits Marjorie Chan, professor of geology and geophysics, for her leadership. “She is an explorer. From her research of rocks on Mars, she has a real sense of stretching the boundaries of imagination.”

“Village” members critical to the success of the building include alumni, faculty, staff, students, consultants, professionals, and partners. Broad participation within the department and its community of friends helped them achieve something unique. Donor contributors are listed on the department’s Web site here.