When she was little, Alberta Comer was an enthusiastic reader in a house with no books, near a tiny Oklahoma town with no library. She read whatever she could find, including the weekly Stigler News- Sentinel. At six years old, she took to wading through the obituaries, having figured out that obituaries are a kind of story (even if the ending always comes before the rest of the plot).

She was smitten the first time she laid eyes on the county bookmobile. Her father had driven her a half hour down the dirt road that led from their house to the town of Keota, where the bookmobile was parked. Once she had climbed inside, she was dazzled. She had never seen or imagined such a place. Books from floor to ceiling! In alphabetical order by the name of the author! Looking back now, she figures the bookmobile was probably pretty small. “But at the time I had no idea so many books existed,” she says.

A half century later, still crazy about books and libraries, Comer is the new dean of the University of Utah’s J. Willard Marriott Library, where she oversees a 3.2 million-piece collection. Books brought the big, unimaginable world to Comer as a child. And it was the idea of managing and sorting books—of organizing knowledge so she could bring the world to other people—that led her to become a librarian, and eventually to this spot as head of, in her words, “one of the best libraries in the country.”

Comer comes to the U from Indiana State University, where since 2007 she was dean of the Cunningham Memorial Library, housed in a once-dreary building she worked hard to turn into a comfortable, lively place where students wanted to spend time.

“No new library building was constructed, no additional staff were hired, no new funds were allocated,” Comer explained in a 2011 paper titled “Redefining Relevancy in the Electronic Age: The Library as a Real Place.” Instead, the library staff, making incremental changes, repurposed what they already had and paid for it with existing dollars. 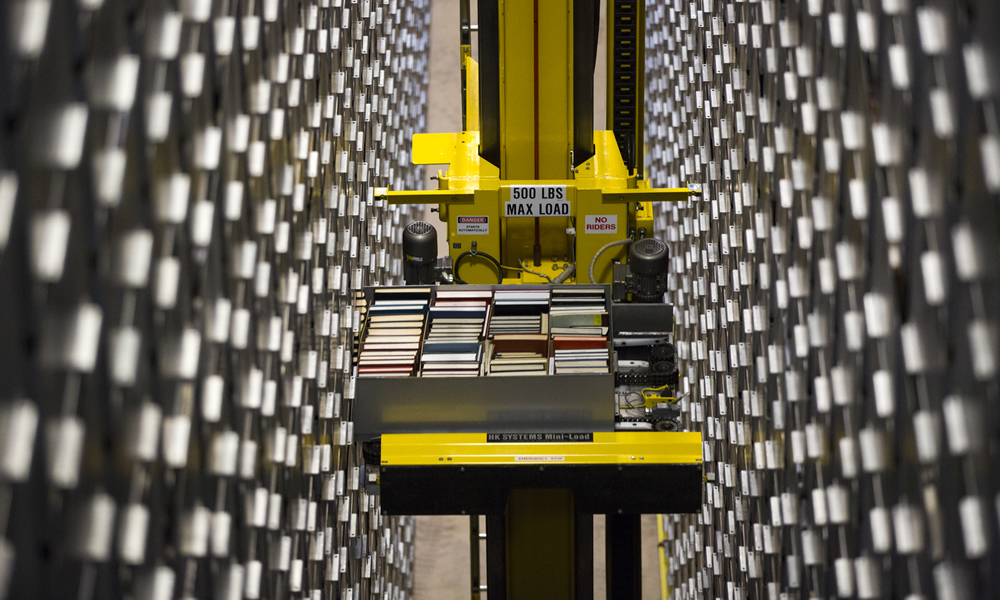 “Many are still in mourning that she left,” says Indiana State’s provost, Richard B. Williams. “She wasn’t just the dean of Library Services, she was a leader of our campus. …I’ve never met a more engaged dean.”

At the University of Utah, the search committee found Comer to be forward thinking, witty, and collaborative, says committee member Sylvia Torti PhD’98, dean of the U’s Honors College. Associate Librarian Alison Regan, another committee member, says she was struck by Comer’s “emotional intelligence that’s way off the scale.”

In the eastern Oklahoma area where Comer grew up, most people were farmers, including Comer’s parents. Her mother was Choctaw and her father Cherokee, and together they farmed vegetables. Both parents had been forced to drop out of school when they were little—her father to go to work, her mother because there was only one pair of shoes for two sisters.

In Comer’s house, there was no TV and no indoor toilet, and there were no siblings. A congenital condition required her to wear leg braces. Books became her companion and provided an entryway into a world populated by princesses and Louisa May Alcott’s four March sisters. Once a month, Comer’s father made the hour-long round-trip to take her to the bookmobile. She says she also spent a lot of time “listening to adults talk,” including the Choctaw stories her mother told, often about animals who behaved in human ways. Even now, says Comer, she can’t resist a good tale, and often finds herself listening to the stories of strangers who come up to her at the supermarket or in the airport. 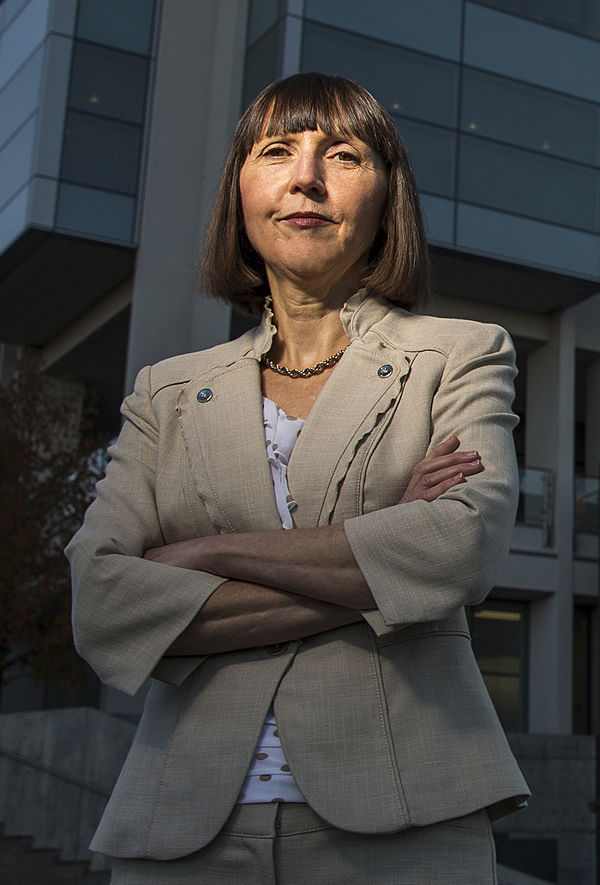 Prior to her new job at the U, Alberta Comer had been dean of Indiana State University’s library. (Photo by August Miller)

“Through reading, I met people who thought about things more deeply and broadly,” she says. “I remember sitting on a large rock, quite a ways from my house, reading A Lantern in Her Hand, the way the author talked about time as if it were tangible, and how it ‘slipped away.’ I was probably eight. I can remember sitting on that rock and wondering if time really would just slip away.”

Her high school didn’t have a library until a teacher decided to create one in a small storeroom and needed a student volunteer. “I was the one who was nerdy enough to want to do it,” Comer says. “I liked the sense of having things be orderly and easy to find. I liked having people come in and ask for something and being able to help them connect with the information.”

In those days, that meant looking on a bookshelf or opening an encyclopedia. Today, navigating the landscape of the digital age requires a guide who can machete her way through thickets of facts and opinions. “For so many years, libraries owned the information. We were the brokers,” Comer says. Now, information is everywhere, all the time, and libraries have had to reinvent themselves to keep up.

When she walked into the U’s Marriott Library on her first visit to the University, it was a bit like that initial glimpse of the bookmobile, she says: “I needed a jaw strap.” She was stunned by the inviting physical space and the number of students using the library. “Many libraries are designed so the architect can say ‘Look at my beautiful building,’ ” she says. “Library employee Chad Jones operates the automated retrieval machinery. But this library keeps the user in the forefront,” with its mix of quiet spaces and group study areas, big rooms and small reading nooks. Renovated between 2005 and 2009, the library now offers a café, panoramic views of the Salt Lake Valley, a “Knowledge Commons” full of computers, and a “Great Reading Room” equipped with white boards. Library users can take advantage of printing, scanning, and video editing support, as well as have access to hundreds of software programs and billions of research articles.

Still, Comer says, a cleverly designed building and a mountain of data wouldn’t have been enough to convince her to leave her home and her job and move halfway across the country to Utah, far from her two grown children and three grandchildren. “What convinced me to come was not the beautiful building but the people, because they put the students and faculty first.” It also didn’t hurt that both Comer and her husband, John, a retired geologist, have hiked in Utah for years and can’t wait to explore even more of the state.

That hiking is all part of a joy in motion that Comer discovered as an adult. Her parents had been told when she was a child that she would never walk unassisted unless her legs were broken and reset. Instead, they opted for the braces. Eventually, she was able to walk, and in 2003, she decided to take up running and now enjoys participating in local races. “I’m hoping to run some half-marathons here when I’ve adjusted to the altitude and to the landscape being uphill in both directions,” she says.

It has been a long journey from the bookmobile in Keota to the Marriott Library, which is one of only 108 research-intensive libraries in the United States and is known for its fabled Middle East collection, the third largest in the world, as well as its book arts program, its university press, and its three million archived photographs. 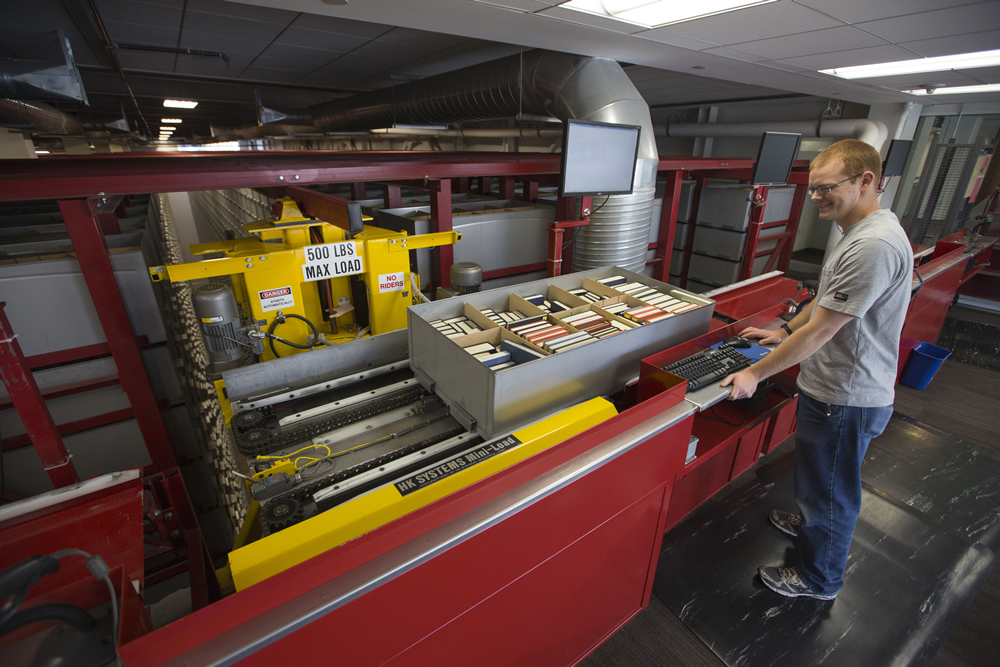 Along the way, Comer got a bachelor’s degree in general studies and a master’s degree in library science from Indiana University, graduating in both cases with a 4.0 grade point average. She has worked in military libraries, a religious library, and public libraries, starting in the era of the card catalog. She remembers the thrill of being the one who got to carefully put the catalog rod back in place after new cards were added to a drawer.

She also remembers being on the staff of McFarlin Library at the University of Tulsa in the 1980s when cataloguing became automated. As they carted off one of the card catalogs to the street, she says, a professor threw himself across it, as if it were a casket.

These days, at the U’s Marriott Library and on other campuses around the world, a student researching global warming, say, can have tens of thousands of Googleable articles to choose from, with Wikipedia always elbowing its way to the top. It’s the librarian’s job to help drill down to a manageable list of scholarly sources from reputable journals. So librarians are also teachers, helping students learn to both access and assess information. Those skills, says Comer, are ones students will use for the rest of their lives.

“In some of the staff’s working lifetime,” notes Greg Thompson, Marriott’s associate dean for special collections, “they’ve moved from passive, paper-based resources to cloud-held digital resources, and the thought pattern in the way you do that is enormously different,” a leap across “several Grand Canyons” of expertise, he says. “There is a constant need to train and keep staff and faculty current.”

Comer oversees a staff of 370 full-time and part-time employees, including 41 librarians. Many of the librarians have multiple graduate degrees, in fields ranging from the sciences to the humanities, as well as master’s degrees in library science. Among their many duties, the librarians also help faculty members write grants and create digital textbooks, a savings for students overwhelmed by the costs of standard textbooks.

The library often now buys e-books (a good e-version of a book, notes Associate Librarian Alfred Mowdood, head of Marriott’s research and information services, can search a full text in five seconds, open high-resolution paintings, and link to videos of experiments). The library also saves money and space by buying or printing some books on demand. Comer says that in the past, libraries would buy books “just in case.” Now, she notes, “It’s ‘just in time.’ ” 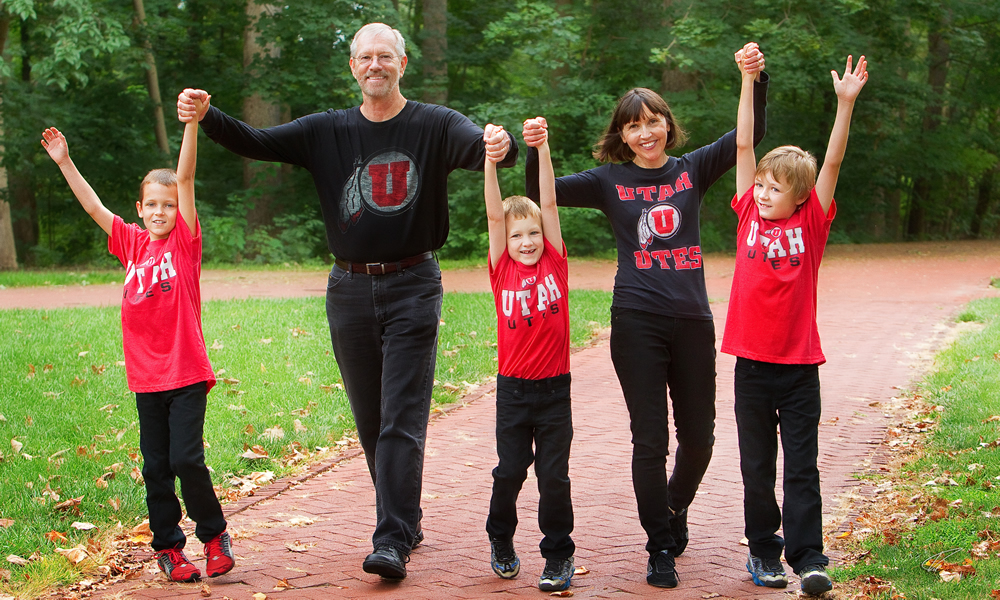 University of Utah library dean Alberta Comer and her husband, John Comer, with three of their grandchildren. (Photo by Kip May)

The Marriott Library also has been able to free up space by investing in a high-density storage and retrieval system. If you stand in the storage and retrieval area on the second floor of the library and gaze down, there are metal boxes stretching downwards for three and a half stories, a futuristic slot canyon of literature and information. Books are stored inside the boxes and are fetched by a large, yellow robotic device that can find and deliver a book within minutes.

All that high-density storage means that the library’s “collection footprint”— the area reserved for the books and materials that used to be a library’s essence—is only 25 percent of the building’s 500,000-plus square feet. Included in that 25 percent are 100,000 linear feet of Special Collections materials, items ranging from Mormon diaries to the memorabilia of Utah’s ski pioneers. Only a fraction of the materials have been digitized, because of cost limitations.

Comer remembers the days of card catalogs fondly, but she is not the kind of person who grieves for the simpler past. She embraces the digitizing, robotic-retrieving, print-on-demand present, and says she is ready for whatever comes next. She hopes to make the library more family-friendly but is still gathering data, she says, about other changes.

“I’m big on planning,” she says. “And I’m big on having participation across the library and campus. It will start with a lot of conversations.”

—Elaine Jarvik is a Salt Lake City-based freelance journalist and playwright and a frequent contributor to Continuum.

2 thoughts on “A Pathway Through Books”