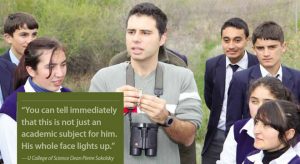 I enjoyed reading the article on the Turkish professor here at the U studying and researching birds [“Tracking Winged Sentinels,” Spring 2012].

I graduated from the U in 1997 with a degree in Turkish language and literature. It is very nice to see a Turkish professor at our University being so successful. Having lived in Turkey for two years with my husband and young son, I know how great the Turkish people and their culture are. The travel opportunities in Turkey are also very interesting and historically significant. Few people in the U.S. know where Turkey is located or of its historical significance in world history.

Keep up the great work.

Proud of Grandpa and the Blitz Kids

I’m Vadal Peterson’s granddaughter, and I grew up hearing how proud he was of the team and the circumstances and events leading up to the win [“The Blitz Kids,” Spring 2012]. Thank you for your acknowledgement of this great achievement.

I, too, am a granddaughter of Vadal Peterson. Isn’t it amazing how different college sports were back then—the coaches did not receive huge salaries, [and] the players were shorter! All the grandchildren are proud of our grandfather!

It saddened me greatly to learn, after reading in the Fall and Winter issues of Continuum, that my alma mater, Utah—of which I was once proud—has decided to become a football factory, following Penn State, Ohio State, Michigan, Nebraska, Alabama, and other schools of similar ilk. Thus the definition of “university” in a Harold Lloyd comedy from 1925 as “a football stadium with a couple of classrooms attached.”

It is amazing the numerous problems with the theories of evolution that their scientific proponents gloss over and at the same time refuse to give creationism the time of day because of its supernatural nature [“Evolution of a Scientist,” Spring 2012]. Let me mention just a few.

There is life itself. Evolutionists postulate that billions of years ago conditions were perfect when a sunspot or some other natural phenomena accrued providing the chemicals or energy that started life with a single cell in the sea. Yet deprive a newborn (whatever) of a life-required substance (air) for just a few minutes and no chemical or energy will restore life to a perfectly conditioned creature.
Then there is the fact that a single-cell amoeba has a DNA strand that is more complex than a fleet of 747s. There is no scientific explanation for this complexity. To believe that a lightning strike or some other natural phenomena created it is absurd.

What about the problem of reproduction? There is no scientific explanation for the development of reproduction or the requirement for a male and a female in the reproductive process. How does survival of the fittest explain this?

Then there are the problems with the variety of life (why are there mosquitoes, etc.?), the beauty all around us, the intricacy of so much of life (the eyeball), etc.

In an oversimplification, the total scientific evidence consists of some visible evolution within a species and a few fossils that appear to show a migration from one species to another. To accept paltry evidence and totally dismiss intelligent design is not scientific.