A Legacy of Sound 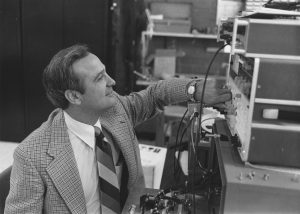 Dr. [Thomas G.] Stockham [“Pioneer in Sound,” Spring 2013] was a very nice guy. I stopped by Soundstream back in the late ’70s and visited with him out of pure curiosity for what he was doing.

He gave me a half hour of his time and explained what he was doing and how he was doing it. The disc pack shown [in the online video with the article] held 10 minutes (!) of music.

Yes, this guy was a major pioneer in the history of recording, from Edison to the present.

For my last two years at the U, a large group of us (engineering & business students) would meet at the Crimson Commons, the restaurant in the basement of the Union Building, for lunch, and play dealer’s choice poker. Nolan [Bushnell] [“The Impresario,” Spring 2013] was a regular participant, and would often bet without even looking to see what he had. He was “gutsy” then, and still is now. I would not describe him at that time as being nerdy, but kind of a fun guy to be around.

Nolan [Bushnell] was a fraternity brother of mine, and we lived at the fraternity house at the same time. He was always an exceptional Nerd.

Praise for an Innovator

You’re a real hero, John [Warnock] [“The Innovator,” Spring 2013]. I still remember that time in 1968 seeing a drawing on Dave Evans’s office wall of a building illustrating the new “hidden line algorithm” by student John Warnock. I couldn’t imagine how the data was represented. It was just a bunch of points in space! How did he deal with it?

Congratulations on your contributions.

Many thanks for both putting the item about me in “Through the Years” [Winter 2012-13] and making sure that I saw it.

Several fellow U of U geezers and geezettes saw the item and sent me congratulations via email.

I owe a great debt to U of U. I was treated as a person, not just a student ID number. As an undergrad, I had only vague ideas of a career. However, two U of U professors thought I would make a good scientist.

First, as I was completing my B.S., Professor Ivan Cutler called me in and said as much—but did not leave it at that. He told me Professor Milton Wadsworth had a Ph.D. research assistantship to offer to the right student. Then he picked up the phone and made me an appointment with Professor Wadsworth. He, too, decided I had potential and awarded me the assistantship. I did my research under Professor Wadsworth’s excellent direction. I became a scientist, and it has been a great career for me.

Two U of U professors treated me as a person and shaped my life.