Looking at the Logo 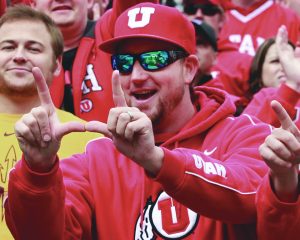 I just finished reading the “Heartbeat of the People” article in the [Fall 2012] Continuum, and the following comments/questions are stirring within me. I attended the U in the “Runnin’ Redskins” era and was saddened when that nickname went away. Now, it seems that “Utes” and the “drum and feather” logo are not politically correct. The issue is not with the Ute Tribe but with people not raised in the shadow of the U and the tradition of the Native American culture. The warrior mascot has been replaced by a red-tailed hawk whose name brings to mind a certain athletic shoe. How will the teams of the U be named if the changes become effective? What would be the next target? The colors of the U? Crimson may be an offensive color to some. White definitely could be a problem. Maybe the name of the state needs to change, too. After all, “Utah” is derived from a Native American word meaning “One who lives higher up,” which basically translates to “Land of the Utes.” It seems like rewriting history. My five yearbooks are no longer correct with their references to unacceptable nicknames, mascots, and logos. Just some thoughts. I am very thankful for the education and enjoyment that the University of Utah has afforded me for all these many years.

My heart goes out to everyone attached to the Ute name and the drum and feather logo. As an undergraduate alumna of a school (The College of William and Mary) that was so proud of its two-feather logo when I attended, it has been hard to accept its replacement. Yet for the current students there, they embrace the new symbol and mascot wholeheartedly because it represents their college. Though my heritage is remotely Native American (1/16 Seminole), I was proud to support the tribe and still uncomfortable with the “tomahawk chop” arm motion used by students at sporting events. It is likely that the abuse of Indian imagery will persist in our time. Even without it, some will continue to be offended by the Ute name and logo. Should the Board of Trustees choose to replace them, at least we alumni can consider our Ute gear and paraphernalia to be rare classics in years to come!

I was very pleased to see in the Fall 2012 issue of Continuum that the U is testing a wireless electric shuttle bus [“Campus Notebook,” bottom brief]. Since graduation from the U in ’85 and a successful career in the software industry, I’ve become very involved in advocacy work for electric transportation. My wife bought our first electric car in 2008 as an experiment in more sustainable transportation. We hoped it would cover half of our local driving, but found an electric car with a 100-mile range covered all of our local driving and offered such a superior driving experience that our garage is now all-electric. I’m vice president of Plug In America and look forward to seeing continued advancements in the electrification of both personal and mass transit.

A Pioneer for Equality

In the Fall 2012 issue of the Continuum, Kim M. Horiuchi wrote a very good article, “Leveling the Playing Field,” on Norma Carr, a U alumna and former coach, and her struggle to participate in sports before, and even after, passage of Title IX in 1972 giving women access to intercollegiate sport equal to men.

What the author neglected to mention is the woman primarily responsible for the passage of Title IX, Congresswoman Patsy Takemoto Mink (D-Hawaii). In fact, Title IX is [now] known as the Patsy T. Mink Equal Opportunity in Education Act.

Mink saw, and was target of, ethnic and gender-based discrimination, starting with her Japanese American family on the plantation in Hawaii. She was class president and valedictorian when she graduated Maui High School at age 16 in 1944. Planning on a career in medicine, she received a B.A. degree in zoology and chemistry from the University of Hawaii. When she applied for medical school, she was turned down by over 30 medical schools, not because of her grades, not entirely on her Japanese American heritage, but because of her gender.

Her career path changed in her passion to serve the community, and she enrolled in the University of Chicago Law School. In 1951, she married John Mink, who was also attending the University of Chicago, studying geology. After the birth of their daughter, Gwendolyn, the family moved to Honolulu. She again faced sexism when no law firm would hire her. Therefore, she opened her own tiny law office, supplementing her income by teaching business law at the University of Hawaii.

She began her political career when she ran and was elected to the Territorial House in 1956, and the Territorial Senate in 1959. That same year, 1959, Hawaii was admitted to the Union, and she unsuccessfully ran for the House seat. She was defeated by a war hero, Daniel K. Inouye.

In 1964, Mink did win the House seat, and she became the first woman of color in the U.S. Congress. She served in Congress from 1965 to 1977, and again from 1990 to 2002, when she passed away. In between her two periods of service in Congress, she served as Assistant Secretary of State for Oceans and International Environmental and Scientific Affairs. She ran for president of the United States, to show Americans to consider the possibility of a woman president. She was on the Oregon ballot on the Green Party.

Mink had an illustrious career. She introduced or sponsored many important bills and legislation, particularly those pertaining to education, children’s issues, the environment, and women’s rights. She was a principled fighter, going against party votes if it did not fit her own agenda. However, one of her greatest legislative triumphs, and one which she is most closely associated with, is being the author of the Title IX portion of the Education Amendments of 1972 and garnering critical support for its passage. Because of her persistence, passion, and leadership, women of today are able to participate in competitive sports, with scholarships and funding equal to men.

September 28 was the 10th anniversary of her passing. We should all pause to remember this courageous trailblazer, who, like many other civil and human rights leaders, made a difference in all our lives, and in our children’s lives. Patsy Takemoto Mink (1927 – 2002)

Such a wonderful article on a truly amazing man [“The Way of Motion,” Fall 2012]. I was a member of the Actor Training Program when Jerry [Gardner] first came on board, and there are few people who leave an impression on your life so strong that 12 years later you still hear their voice in your head, dropping lessons and insight. Jerry is certainly one of them. I miss him out here in NYC, but his lessons are always there.