In 2003, University Neighborhood Partners (UNP) launched with a charge to create partnerships between the university and west Salt Lake City neighborhoods, with the goal of helping more west side youth pursue higher education.

Over the past 15 years, UNP and its collaborators have worked to break down the systemic barriers to educational success. Looking back at how the neighborhoods and university have changed in more than a decade, one indicator of success shows that the number of Latino students enrolled at the U has increased from 21 students in 2002 to more than 200 students currently—up by over 900 percent.

Alonso Reyna Rivarola BS’13 MEd’16, Dream Program director for the U’s Office of Engagement, knows firsthand how UNP can change lives. “I remember when I first found out about UNP nine years ago. I was a high school senior interested in attending the U, unaware of the steps I needed to take to apply,” he recalls. “UNP supported me in the process of applying to the university as an undocumented student. This was a critical moment in my life and has led me in my pathway into higher education.”

At a celebration in April at Rice-Eccles Stadium, UNP reflected on its history, recognizing its partners and all the people who work to make the program a success. Various community groups from the west side performed, expressing the richness of the neighborhoods they represent. 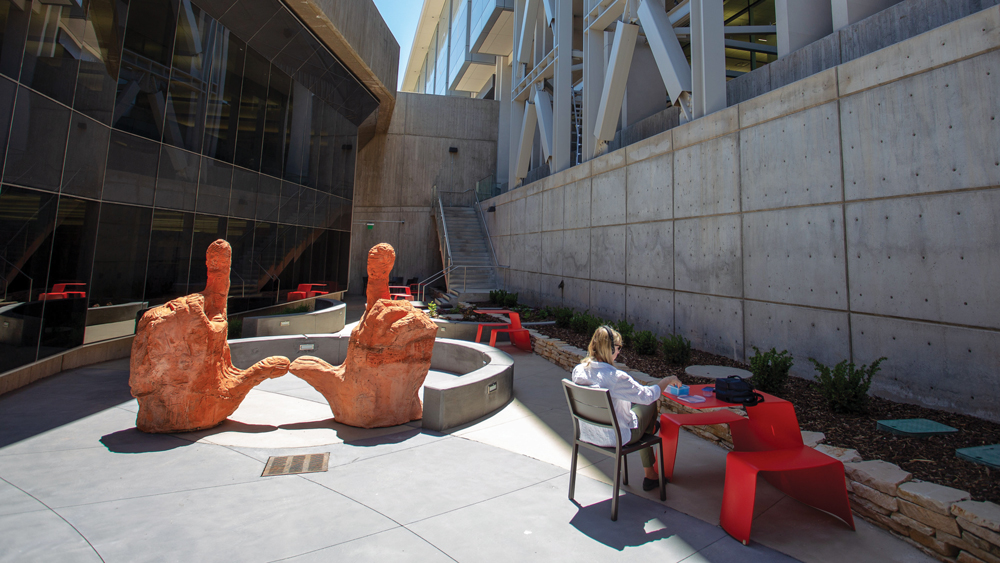 Students can take a break from studying and get some fresh air in the new Katherine’s Courtyard, an outdoor extension of the Katherine W. Dumke Fine Arts & Architecture Library housed within the U’s J. Willard Marriott Library.

Spanning two levels, this new addition provides additional study, relaxation, performance, teaching, and exhibition space. The majority of the courtyard is outside, with first-floor access from Mom’s Café and the level-one book stacks. Level two has a four-season enclosure that will be open to the outdoors in the warmer months and closed with radiant floor heating in the winter. Students can study at the tables, lounge on a bench, or just relax and enjoy the sculptures on display.

Katherine’s Courtyard was made possible through a donation from Katherine Dumke BS’51 prior to her passing in 2014. This April, her husband Zeke BA’50 also passed away. The U is grateful for the generosity and support of the Dumke family over many years. 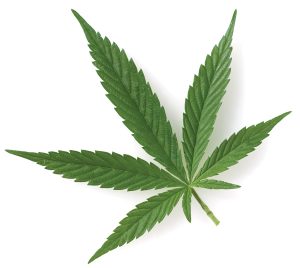 U to Study Effects of Cannabis on the Brain

Thanks to a $740,000 grant, U researchers have begun a new project examining how cannabis affects the human brain. The two-year study will use brain-imaging technology to examine how cannabinoids influence brain networks and why they affect individuals differently.

The medical use of cannabinoids is now permitted in 29 states and counting, yet critical questions remain unanswered about how the plant’s main active compounds, tetrahydrocannabinol (THC) and cannabidiol (CBD), influence brain networks. The grant, which will allow U researchers to take a deep dive into these questions, is from the Ray and Tye Noorda Foundation and the Wholistic Research and Education Foundation.

The study will examine 40 adults and involve researchers from departments including neuro-imaging, biostatistics, physics, and psychiatry. It will use advances in medical imaging to compare how the brain reacts to a placebo versus THC and CBD. The results will offer a first of its kind view into how the personalized effects of cannabinoids may arise from the type, density, location, or other differences of brain receptors. 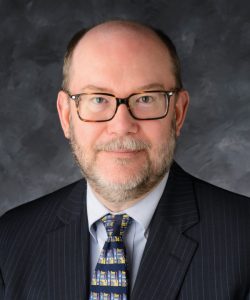 Daniel A. Reed is the U’s new senior vice president for academic affairs, the position previously held by President Ruth Watkins. Reed, who starts in July, comes to the U from the University of Iowa, where he has been serving as its computational science and bioinformatics chair and a professor of computer science, electrical and computer engineering, and medicine. From 2012-17, he served as Iowa’s vice president for research and economic development.

Reed’s background is a blend of extensive corporate and academic experience. He is a former corporate vice president and technology policy leader at Microsoft, the founding director of the Renaissance Computing Institute at the University of North Carolina at Chapel Hill, and was the director of the National Center for Supercomputing Applications at the University of Illinois.

Reed’s most recent scholarship has focused on challenges and opportunities related to cloud and edge computing in both academic and corporate research settings. A graduate of Missouri University of Science and Technology, he earned his master’s and doctoral degrees in computer science from Purdue University.

Reed is very enthusiastic about the U’s growth trajectory and looks forward to partnering with students, staff, faculty, and Utah residents to build an “extraordinary future,” he says. “Utah is a great public research university with a deep commitment to student success, breakthrough research and scholarship, effective economic development, and insightful partnerships that serve our society and health,” he adds.

In addition to his work at the University of Iowa, Reed chairs the U.S. Department of Energy’s Advanced Scientific Computing Advisory Committee and the steering committee for the National Science Foundation’s Midwest Big Data Hub. He previously served on the U.S. President’s Council of Advisors on Science and Technology, and the President’s Information Technology Advisory Committee.

Utah Gymnastics Rallying for a Remodel

With the goal to remain among the nation's elite college athletic programs, Utah gymnastics has initiated a fund-raising campaign to expand and upgrade its aging training facility, the Dumke Gymnastics Center.

The plans call for a partial second story addition to house an expanded team locker room, lounge, and balcony. Other amenities include locker rooms for the coaches and improvements to the athletic training and rehabilitation area. The campaign’s goal is to raise $3 million with construction beginning in 2020. For more information, visit crimsonclub.utah.edu or call 801-587-9894.

The U is poised to dramatically transform the way medicine is taught, thanks in part to a $15 million gift from Intermountain Healthcare to fund a new medical education building. Now, the U can finally replace the venerable 52-year-old School of Medicine building, which is outdated and seismically unsound.

Intermountain’s senior management team and board bestowed the gift as an expression of gratitude for the U’s commitment to providing high-quality medical education in the state of Utah and surrounding region and for educating the majority of physicians who practice here. The U trains two-thirds of Utah’s practicing physicians—that’s 125 doctors every year. In addition, the U graduates 44 new physicians assistants and more than a thousand nurses, dentists, physical therapists, dietitians, and other healthcare professionals each year.

“It’s an important part of our [Intermountain’s] charitable mission to support the education of physicians and other medical professionals, and the University of Utah plays such a critical role in that work and does it exceptionally well,” says Marc Harrison, M.D., Intermountain’s president and CEO. “We greatly value the cooperative and collegial relationship our two institutions have had through the years."

Pointing to the critical physician shortage in Utah, Lorris Betz—interim executive dean of the U’s School of Medicine, senior vice president for health sciences, and CEO of U of U Health—says the training of the next generation of physicians is more important than ever. “As health care changes, how we teach and train also needs to change. This isn’t just about a new building. This is about moving education forward, out of silos, and into an interdisciplinary environment where collaboration and new ideas take shape,” he says. “We are grateful to partner with Intermountain Healthcare for this important goal.”

The new medical education and discovery building is expected to be completed in 2022.

EAE Marks a Decade at the Top

It didn’t take long for the Us Entertainment Arts & Engineering (EAE) video game development program to reach the pinnacle of game design schools. In just 10 years, EAE has become one of the top development programs of its kind in the nation, ranked the No. 1 video game program for three of the last six years by the Princeton Review.

“When we began EAE, we set out to create a way for artists and engineers to learn to work together, make games, and get jobs,” says EAE Director Robert Kessler BS’74 MS’77 PhD’81. “We never would have imagined that would lead to an organization with its own bachelor’s and master’s degrees and nearly 1,000 successful graduates.”

To celebrate its success, EAE recently hosted an anniversary event, followed by its annual “EAE Launch Day” when graduating seniors and master’s students show off their completed games. Here is a sampling of the games.

► “Porcuball” (pictured above): A physics puzzle game in which players take the role of Quill, a porcupine who rolls around in the woods and solves environmental puzzles.

► “And I Must Scream”: A game that delves into the psyche of a young boy as he metaphorically and physically traverses the five stages of grief.

Great news for the middle class of Utah. The U has been selected to take part in an innovative ideas challenge to help ensure a more vibrant middle class in America. The challenge, sponsored by the Alliance for the American Dream, gives the U the opportunity to solicit and develop top policy and technology ideas from throughout the state—ideas that have the potential to boost net income 10 percent for 10,000 middle-class Utah households by 2020.

Here's how the challenge will work. The university, under the direction of project coordinator Courtney McBeth BA'01 MS'05, will solicit ideas through late fall. Ten proposals will then be selected, and each will receive up to $10,000 to further develop its idea. Next, a local advisory board led by President Ruth Watkins will select the three best ideas from that group. Each proposal will be eligible for an additional award of up to $30,000 to help refine the concept.

The U will work with the final three teams by providing access to facilities, connections to resources and faculty, etc., and will then forward those proposals to the alliance, which will provide up to $1 million in additional support to the best ideas that emerge from across the nation.

The innovative ideas challenge marks the launch of the Alliance for the American Dream, an initiative of Schmidt Futures. The alliance’s goal is to increase shared prosperity and American competitiveness by generating and investing in ideas that strengthen the middle class. The ideas challenge at the U is made possible by an initial gift from the alliance of $1.5 million. For more information, click here. 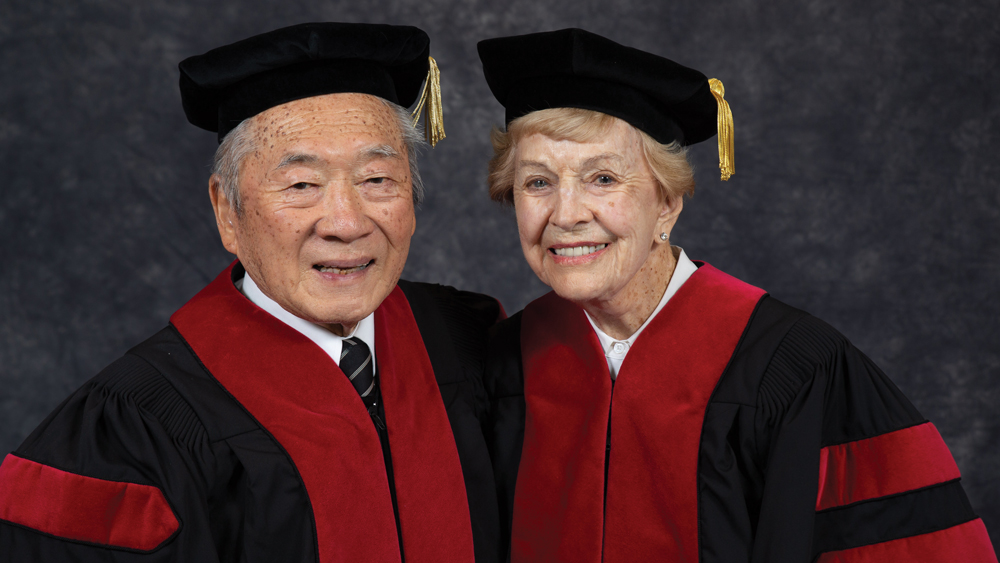 At commencement in May, the U bestowed honorary doctoral degrees on two outstanding individuals, Raymond Sonji Uno and Barbara Lindquist Tanner.

Uno BS’55 JD’58 MSW’63 is a trailblazer, civil rights advocate, and the first ethnic minority judge in Utah’s history. As a child, he was among 120,000 Americans of Japanese ancestry forced into U.S. internment camps during World War II. In spite of that experience, he later chose to enlist in the U.S. Army. After his service, he earned his numerous degrees from the U. He went on to have a successful legal career as a referee of the juvenile court, deputy Salt Lake County attorney, assistant attorney general of Utah, and in private practice. He served for almost a quarter of a century as a judge to the Salt Lake City Court, 5th Circuit Court, and Third District Court. 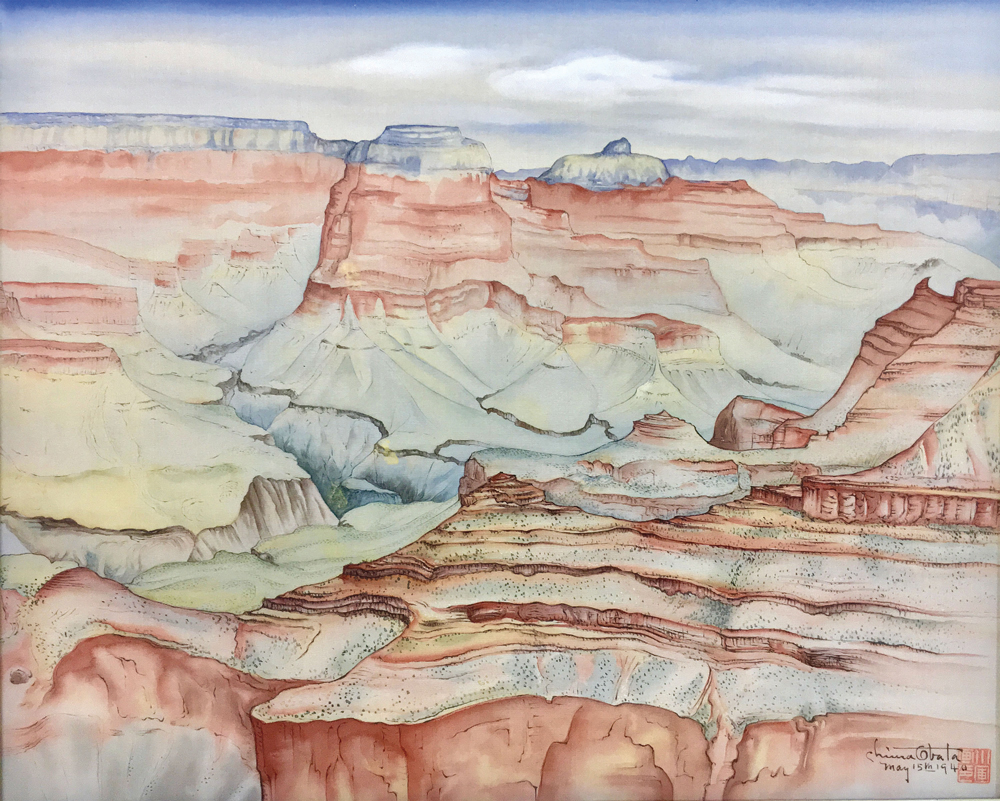 Check out the Utah Museum of Fine Arts' exhibit featuring the work of Chiura Obata, one of the 20th century’s most significant Japanese American artists. Best-known for his depictions of Yosemite National Park, Obata also produced some important work in Utah while imprisoned during World War II at the Topaz War Relocation Center outside Delta. The show is open now through September 2.