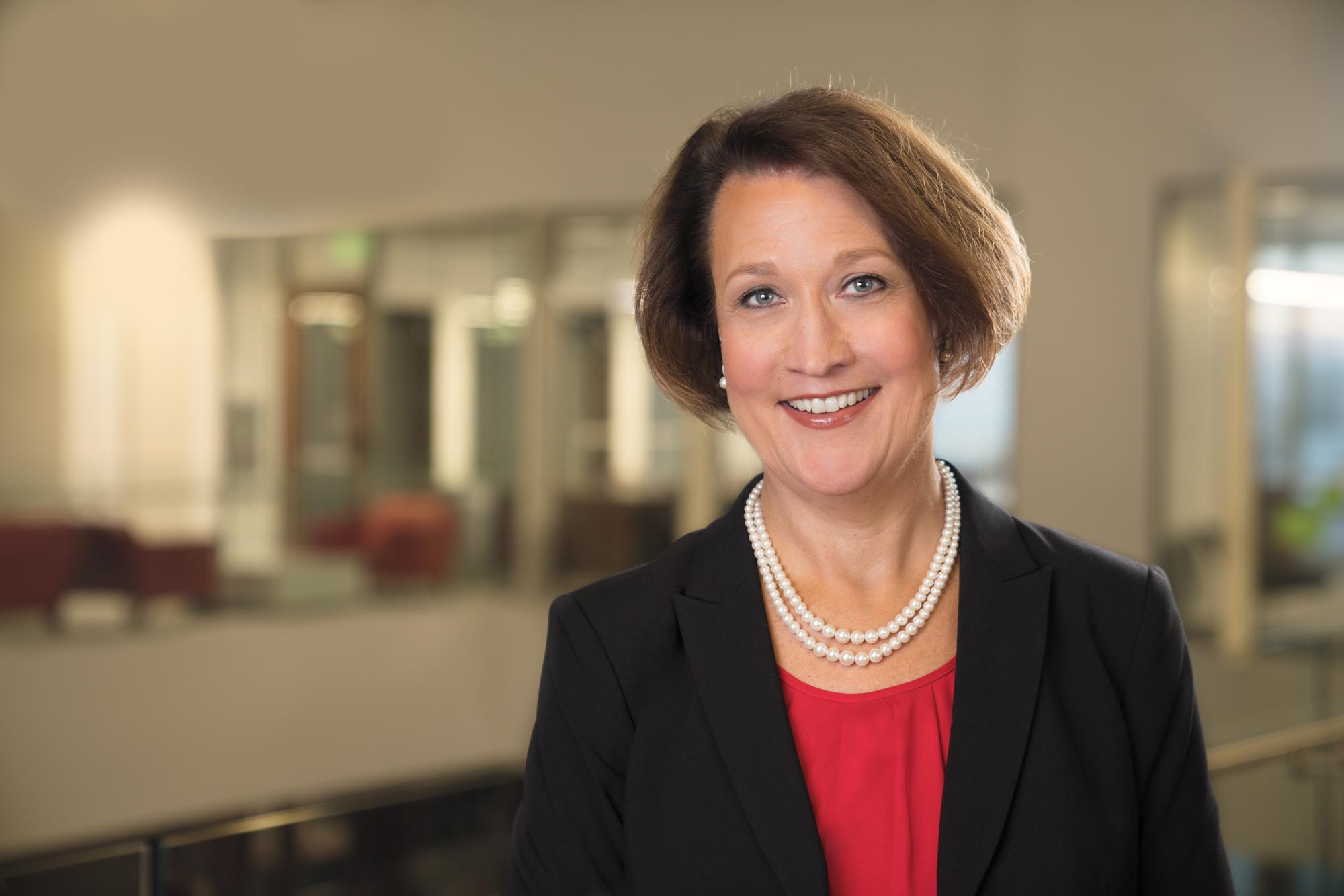 In January, the Utah State Board of Regents announced the selection of Ruth V. Watkins as the 16th president of the University of Utah. In our summer issue of Continuum, readers will get an in-depth look at our new leader, but for now we'll give you a brief introduction.

For starters, Watkins is the first woman to serve as president of the university in its 168-year history. (Jerilyn S. McIntyre served as interim president of the U twice, for two months in 1991 and all of 1997.) On April 2, Watkins takes the helm, succeeding David W. Pershing, who has served as president since 2012 and will officially step down to rejoin the U as a faculty member.

A 25-member Presidential Search Committee, co-chaired by David Burton BS'67, chair of the U's Board of Trustees, and Board of Regents Vice Chair Harris H. Simmons BA'77, selected Watkins from a pool of national candidates. "In all measures, Dr. Watkins rose to the top in our national search for the next president to lead the U," says David L. Buhler BS'83 PhD'14, commissioner of higher education. "She is a superb and energetic administrator and a proven fundraiser who understands our community and will be able to continue the momentum of our flagship university."

Watkins has served as senior vice president for Academic Affairs at the U since August 2013. In that role, she has worked closely with campus leaders to set the university's strategic direction and align the U's resources with its academic priorities. She has been an advocate for advancing the success and impact of the U as a top-tier research university, including enhancing student success through degree completion and expanding research and creative activity.

"I am deeply honored to have this opportunity to lead the University of Utah and offer my thanks to the Board of Regents, the university's Board of Trustees, and the search committee for their confidence in me," Watkins says. "The University of Utah plays a vital role in the state, and increasingly the nation, in path-breaking research that solves societal challenges and educational opportunities that transform lives. My goal is to ensure that we continue and accelerate this trajectory in the years ahead."

AND THE ‘OSCAR OF SCIENCE’ GOES TO... 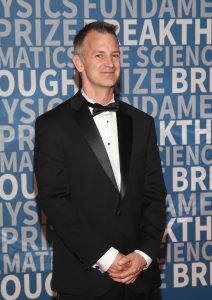 Yes, Christopher Hacon wore a tuxedo to receive his Breakthrough Prize in Mathematics. After all, the event was hosted by actor Morgan Freeman in Silicon Valley. The $3 million prize, shared with James McKernan of the University of California, San Diego, recognizes Hacon's work in algebraic geometry. Awarded in physics, life sciences, and mathematics, Breakthrough Prizes honor important and recent achievements in fundamental science.

Hacon was born in England and grew up in Italy. He arrived at the U as a postdoctoral scholar in 1998 and returned as a professor in 2002. He is particularly interested in objects that exist in more than three dimensions, and he and his colleagues have applied studies of these objects to extend the "minimal model program," a foundational principle of algebraic geometry, into higher dimensions. The American Mathematical Society has lauded their work as "a watershed in algebraic geometry." His Breakthrough Prize citation acknowledges his "transformational contributions to birational algebraic geometry, especially to the minimal model program in all dimensions." 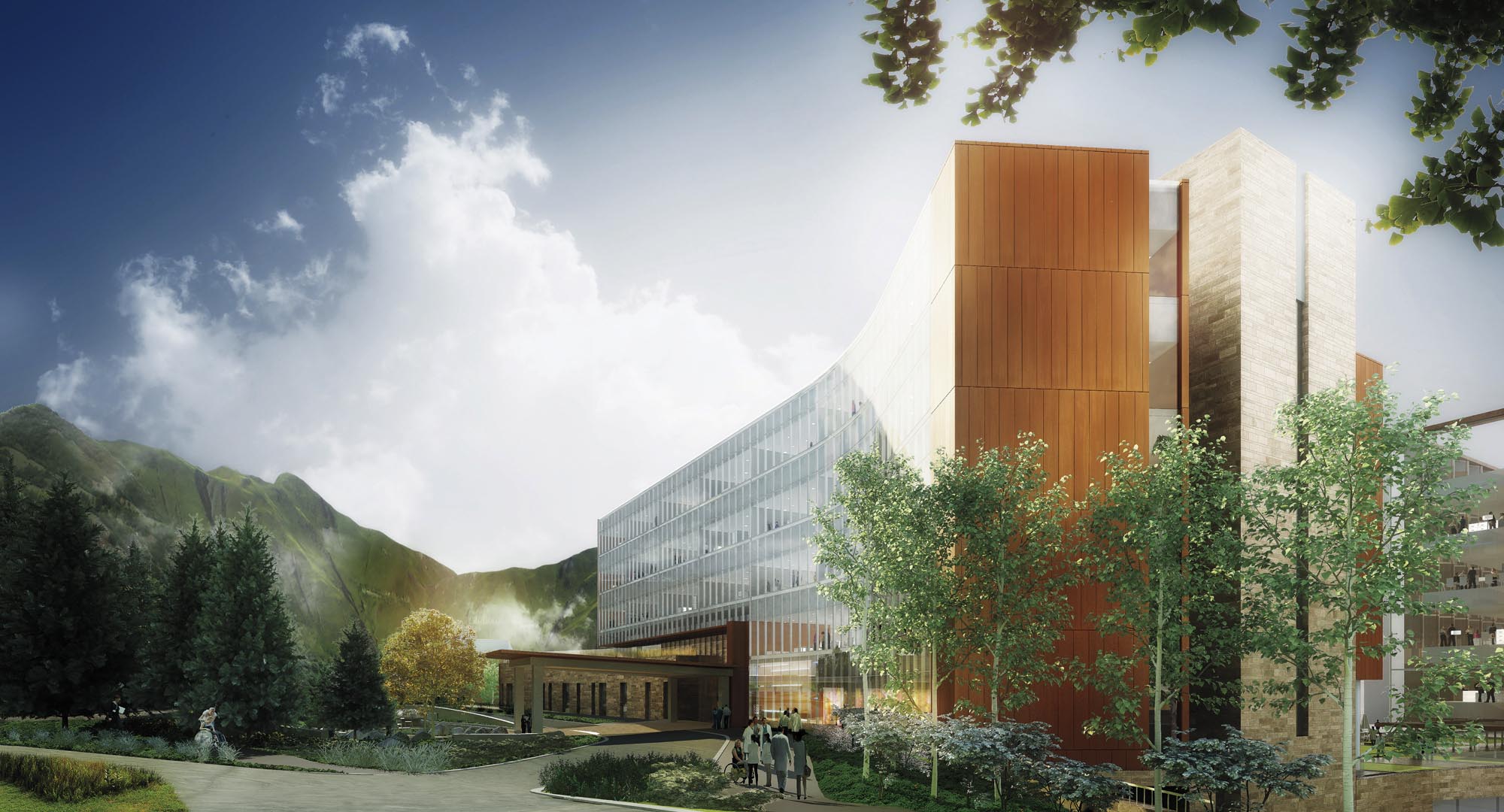 NEW REHAB HOSPITAL ON THE HORIZON THANKS TO FORMER PATIENT

Craig Neilsen MBA'64 JD'67 was no stranger to the rehabilitation hospital experience. In 1985, a car accident left him paralyzed from the neck down with only minimal use of one hand. The U became a home for him during much of his rehab. Now, more than 20 years later, his foundation is donating $47.5 million for a new hospital as part of the redevelopment and modernization of the U's health sciences campus. The 75-bed facility, to be named the Craig H. Neilsen Rehabilitation Hospital, will be one of the most advanced rehab facilities in the nation. It has a target completion date of spring 2020.

"Although the auto accident severely impacted my father's life, it was not the end, as many people might think. It was a new beginning," says Ray Neilsen, Craig's son and co-trustee and chairman of the board of directors of the Craig H. Neilsen Foundation. "My dad had incredible tenacity. He was a force of vision and passion who wanted nothing more than to help people like him. This hospital perfectly emulates his legacy."

Prior to the accident, Neilsen was the owner of a thriving construction and real estate development business in southern Idaho and had recently acquired control of two small casinos on the Nevada-Idaho border. Following his injury, he became laser-focused on his businesses, including the founding and expansion of Ameristar Casinos, which he took public in 1993. In 2002, Neilsen established the Craig H. Neilsen Foundation, which through his personal generosity has become the largest private supporter of spinal cord injury causes in North America.

Craig had several relationships with the U throughout his lifetime that continue to be honored through the philanthropy of the Neilsen Foundation. The university received several grants from the foundation during Neilsen's lifetime supporting the Rehabilitation Center and providing scholarships for students with spinal cord injuries. After his passing in 2006, Craig was honored with the Distinguished Alumnus Award from the university, the highest honor conferred on a graduate.

TThe J. Willard Marriott Library and the Utah Museum of Fine Arts have been awarded a $500,000 grant from The Andrew W. Mellon Foundation-the largest Mellon grant the U has ever received and the only one it has been awarded in the arts and humanities.

The grant will provide partial funding for a four-year collaborative project that will establish the U as a global resource hub for artists and scholars studying the West and create access to the U's remarkable collections, resources, and knowledge.

The project, titled "Landscape, Land Art, and the American West: A Joint Research and Engagement Initiative of the Utah Museum of Fine Arts and the J. Willard Marriott Library," will fundamentally change how the library and museum work together. As leaders in the region for scholarly research, exhibition design, and collections care, the library and museum curate extensive- but separate-holdings related to environmental and cultural histories of the Intermountain West. Through this new initiative, these collections will be linked, making content more accessible for students, faculty, and researchers.

The half-million-dollar grant will be matched by $200,000 from the Office of the Senior Vice President for Academic Affairs and additional support from across campus, including from the colleges of Fine Arts, Health, Humanities, and Mines and Earth Sciences.

"The project will increase the visibility and value of these overlapping collections, energize faculty, and support students to excel as informed and engaged citizens," says Alberta Comer, dean of the J. Willard Marriott Library and university librarian.

NOW YOU CAN STUDY LAW WITHOUT BECOMING AN ATTORNEY

Didn't go to law school but have always wanted to understand law better? This new degree may be just what you need.

This fall, the S.J. Quinney College of Law will launch a Master of Legal Studies (MLS) executive degree program. The three-semester program is specifically designed for working professionals who may benefit from legal training but do not wish to practice law. Because interaction with the legal system is a critical part of many professions-from human resources to land use planning, business management, and financial advising-the degree is expected to have broad appeal.

The U's program, the first of its kind in Utah, will offer intensive courses every other Friday and Saturday-similar to how the business school's Executive MBA program functions. It will take approximately one calendar year to complete the degree, and students will have access to the same top-notch legal expertise as students following a traditional law school path. While the degree does not allow graduates to obtain a law license or practice law, it will equip them with skills critical in almost every industry and important to advancing their careers, including how to interface with legal and regulatory systems and how and when to optimize use of professional legal counsel.

Market research conducted as the College of Law developed the new degree program revealed that Utah in particular is a prime location for such an option. Many companies increasingly provide employees with specific funding to earn degrees that will advance their careers and add value to the company. And, law schools are pointing to growth in the compliance industry as a major driver of market demand. 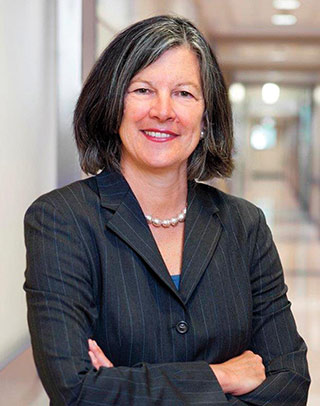 Mary Beckerle, CEO and director of Huntsman Cancer Institute (HCI), just joined the ranks of several Nobel laureates as this year's recipient of the Alfred G. Knudson Award in Cancer Genetics from the National Cancer Institute (NCI). The prestigious award is presented by the NCI each year to a scientist who has made significant research contributions to the field of cancer genetics.

"It's a tremendous honor to have the cancer research accomplishments of my laboratory recognized by the National Cancer Institute" says Beckerle. "I have been fortunate to have had the opportunity to work with many talented graduate students, postdoctoral fellows, and colleagues at HCI, the University of Utah, and around the world as we have worked to understand fundamental aspects of cell biology with the goal of improving cancer treatments."

Beckerle's research has discovered a new pathway that is critical for the ability of cells to respond to mechanical signals in their environment. Such signals are now known to regulate cell growth and movement, two behaviors that are critically important in tumor biology. Her lab is currently focused on understanding the impact of this pathway on tumor progression, particularly in Ewing sarcoma, a rare but deadly bone cancer that typically affects children and young adults.

TOOTING OUR OWN HORN

We're pleased to report that Continuum won several top awards from the Council for Advancement and Support of Education (CASE) at this year's District VII conference, which includes all schools in Arizona, California, Hawaii, Nevada, Guam, and Utah.

"We received a large number of submissions this year, and your excellent work stood out among the best," said the congratulatory letter from Jane Edie, CASE Awards chair and senior director of external engagement at UC Davis. "Your work truly represents best practices across our district." 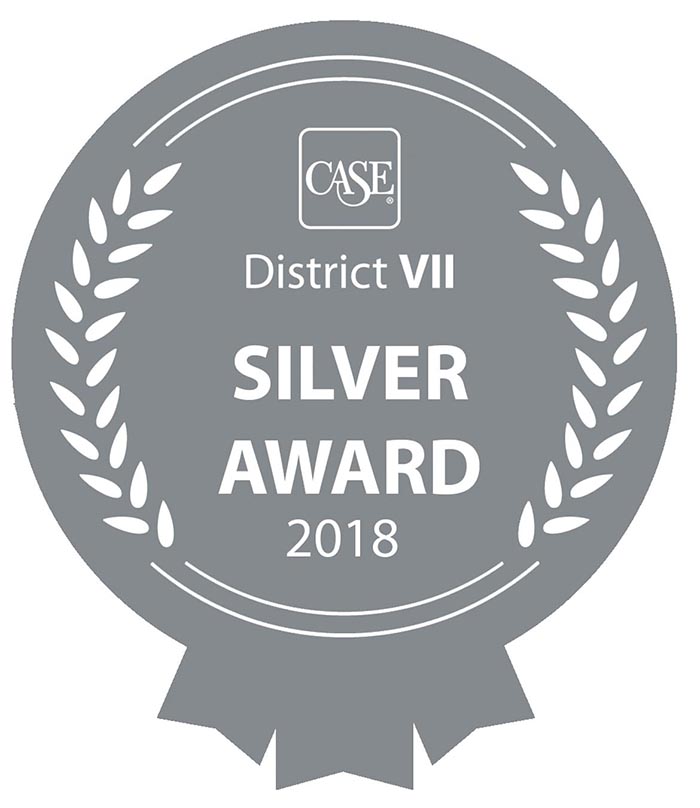 For our recently redesigned website. If you haven't looked around much yet, check it out! It's easier to navigate, has fun web extras, and is more visual than ever.

Silver Award in Best Articles of the Year

For our feature article "Facing the Teacher Shortage: Why Utah struggles to keep educators, and what the U is doing to help," published in Winter 2016-17. 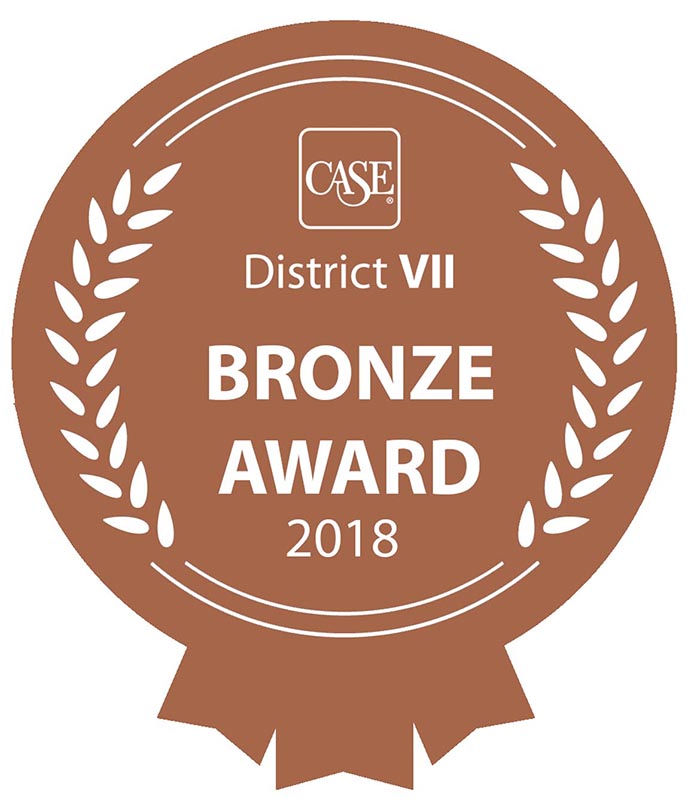 For the print magazine in our circulation category. This award covers a comprehensive look at the magazine including content, design, cover, and more. 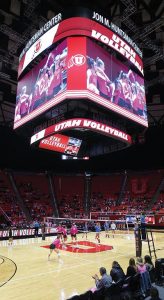 Well, you can’t miss it if you’ve been to the Jon M. Huntsman Center lately. Thanks to a new tech display that adorns the center of the arena and additional tech throughout the bowl, the spectator experience is even more immersive and engaging for Utah fans.

The size of the new boards alone is impressive—your dance cam images will be bigger and more defined than ever. But what really makes the technology come to life is the ability to provide in-game live stat content and additional real time social media experiences to fans.

“With the addition of ANC’s technology, the university is following through on our goal to offer the most innovative arena in collegiate sports,” says Chris Hill MEd’74 PhD’82, U Athletics director. “Increasing the number of video displays will offer fans further opportunities to experience the game, receive updates, and engage with each other.”

Visit unews.utah.edu for more U updates.

One thought on “Updates”