The Dalai Lama Visits the U 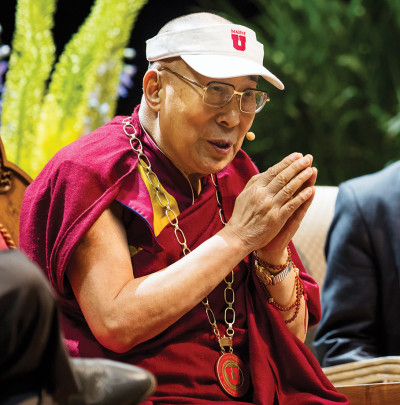 The spiritual leader of the Tibetan people, the Dalai Lama spoke to a sold-out crowd at the Huntsman Center at the end of June. President David W. Pershing had the privilege of introducing His Holiness and honored him with a presidential medal and a visor with a U logo, which the Dalai Lama wore through most of his speech.

Addressing more than 8,000 people, the Buddhist leader spoke with enthusiasm, seriousness, and even humor as he shared his message of peace, compassion, and universal responsibility. The 80-year-old Nobel Prize winner explained that man creates violence and destroys peace and that prayer is not the answer, but action is. “Not God, but you have the responsibility to solve problems,” he said. He urged the audience to create a happier, more compassionate world. A peaceful world starts with one person, then families, then whole communities. “That’s the way to change society,” he said. “I feel it in my heart.”

The Dalai Lama explained that his friends who are scientists promise him that the basic human nature is compassion. “This gives me real hope,” he said. “If our basic nature is anger, then no hope.” When asked about climate change, he laughed and said to ask an expert, but offered this comment: “This blue planet is our only home. If it is damaged beyond repair, then we have no other choice but to be responsible for it.”

His main message, the answer to the meaning of life, was simple. “Serving others. Helping others.” Putting his teachings into action, the morning before his speech, the Dalia Lama visited with and blessed patients at the U’s Huntsman Cancer Institute. 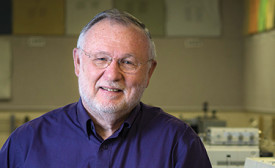 James Ehleringer has received the most prestigious faculty award on campus—the Rosenblatt Prize for Excellence. A Distinguished Professor of biology, he was chosen for the $40,000 gift based on his outstanding teaching, research, and administrative efforts.

One of the most influential scientists in the world in plant ecology, Ehleringer was instrumental in developing the use of stable isotopes for ecological, geographical, geological, and anthropological studies. He created the Stable Isotope Ratio Facility for Environmental Research at the U and has been its director since 1984. During nearly 40 years at the U, he has produced more than 470 publications.

Ehleringer has a doctorate in biology from Stanford University and started teaching at the U in 1977. He served as biology department chair from 1993-96, and was made a Distinguished Professor in 2000. From 2009-15, he served as the founding director for the U’s Global Change and Sustainability Center, and he is currently a member of the Office of Sustainability leadership team. 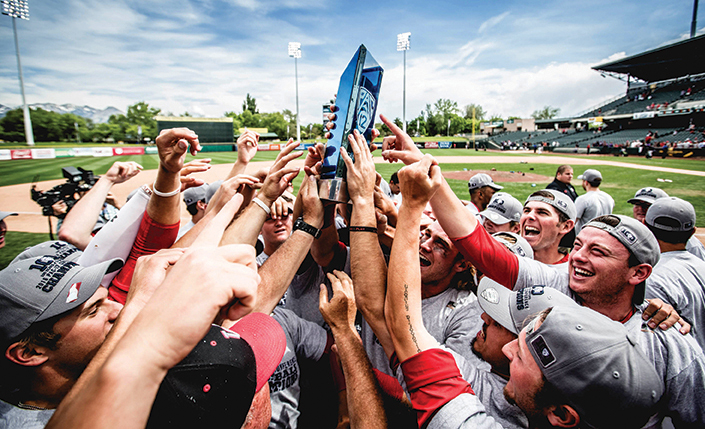 Leader of the Pac

To many college baseball pundits, the Utes did the unthinkable. They won the 2016 Pac-12 championship—in a conference that has produced 28 national champions (including two in the past four years). But what makes this feat truly impressive is the fact that just one year ago, the Utes finished dead last in the conference. It’s the first time a U men’s athletics team has won a Pac-12 championship since joining the conference in 2011 (Utah Gymnastics has won it twice). The title also clinched a berth in the NCAA postseason tournament, only Utah’s second appearance since 1960.

Last year, Utah Baseball won seven conference games. This year, they won eight series versus Pac-12 foes. Utah entered conference play with a 3-11 record. But as the weather warmed up, so did the Utes, starting the season on a 7-2 run and finishing with a program-best 18-11 Pac-12 record. For such a turnaround, Bill Kinneberg was named the Pac-12 Coach of the Year, four players were named to the All-Pac-12 Conference team, and three others were honorable mention picks.

The team played in the first round of the NCAA Division I Baseball Tournament, where they upset the host school and number one seed Ole Miss, then lost in double elimination to Boston College and Tulane.

Watch the best plays from the Pac-12 champion baseball team: 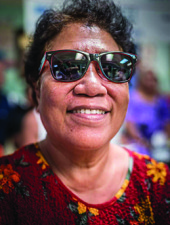 In Micronesia, an island nation in the western Pacific, the population is more than 110,000 and the number of people with curable blindness is staggering. In addition to expensive or nonexistent health insurance and a cultural tendency to avoid wearing UV protective sunglasses, Micronesia had no ophthalmologists—until now. Dr. Padwick Gallen, who works at Pohnpei State Hospital, is the country’s only practicing ophthalmologist, thanks, in part, to his training with doctors from the University of Utah’s Moran Eye Center.

Working with Gallen, Moran’s team treated patients with nasolacrimal duct obstruction, cataracts, and pterygium (a growth on the surface of the eye strongly associated with chronic UV light exposure). By the end of their 12-day mission, they had completed 182 eye surgeries, and the smiling patients were wearing—with pride—UV protective sunglasses given to them by the outreach team. 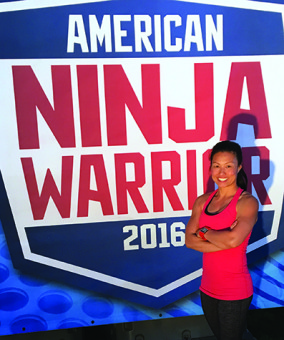 In May, in front of national television cameras, 44-year-old U chemistry professor Janis Louie, with two degrees and three children behind her, stared down the toughest obstacle course she’d faced yet: American Ninja Warrior. Louie’s journey to the Ninja Warrior stage was a unique combination of athletic discipline, academic dedication, and maternal devotion.

A former gymnast, Louie has always loved to push herself physically and academically. At UCLA, she was a chemistry major and a cheerleader. In grad school at Yale, she delved deeper into chemistry, taught aerobics classes, and picked up bodybuilding.

Fast forward to five years ago, when she started her family while teaching chemistry at the U. “I had triplets, which does a number on your body,” she says. But she was determined to get back in shape, good enough shape that Ninja Warrior actually looked “fun” to her.

You can imagine what the producers thought when they saw on her application that she is a chemistry professor, mother of triplets, and fierce competitor. She was selected, and the intense training began.

“How many times as adults do we get the opportunity to put ourselves in a really uncomfortable situation where you can grow from it?” she says. At the competition, she cleared the first obstacle, but the second one took her out of the running. Her own takeaway from the experience, which she says she’d happily do again: “You’re never too old to try.”

Football season just got even more exciting. Ute fans at Rice-Eccles Stadium this fall get to experience a new and greatly improved sound system and video scoreboard. The upgrades take the live game-watching experience up a notch while also reducing the noise disturbance to the surrounding community.

The stadium now has inward-facing speakers along its perimeter, directing sound toward the center of the bowl rather than sending it across the stadium. Previously, all speakers were mounted on the old scoreboard structure. Now there are 130 throughout the stadium, even in the bathrooms.

The freestanding LED scoreboard is 122 feet wide and 64 feet tall, and has 2.6 million pixels, making it one of the bigger boards in the country. It replaced a board that was more than 10 years old and was difficult and expensive to maintain. The screen is placed about 50 feet behind the south end zone to accommodate the possibility of any future changes to that area of the stadium. The $13.5 million for the upgrades was funded by Utah Athletics and Auxiliary Services, not from tuition or state funds.

Watch a time-lapse of the construction of the new scoreboard:

Andrew Weyrich has been named the U’s new vice president for research. Weyrich has been a major contributor to medical research at the U since becoming a faculty member in 1995. Most recently, he was associate dean for research at the School of Medicine, where he helped develop and implement a strategic research plan and oversaw core facilities, recruitment and retention efforts, and graduate programs. He holds an H.A. and Edna Benning Presidential Endowed Chair, a recognition honoring the university’s top medical researchers.

Sherrie Hayashi BS’88 JD’91 is the new director of the Office of Equal Opportunity and Affirmative Action (OEO/AA). In this role, Hayashi also serves as the university’s Title IX and ADA/Section 504 coordinator. Hayashi is deeply committed to the principles of equal opportunity and nondiscrimination. Hayashi came to the U from the State of Utah, where she had served as the Utah labor commissioner since 2006.

H. David Burton BS’67 was unanimously voted in July to lead the University of Utah board of trustees. Burton is an emeritus general authority for The Church of Jesus Christ of Latter-day Saints and also served as the church’s presiding bishop for 16 years. He has been on the U’s board of trustees since 2013. He has a degree in economics from the U and a master of business administration from the University of Michigan. 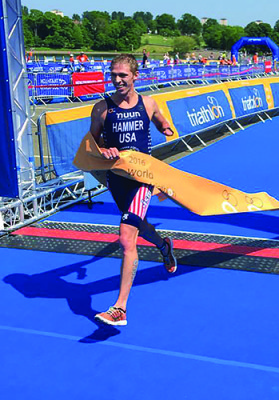 Christopher Hammer, graduate teaching assistant and doctoral candidate in Exercise and Sport Science at the U, headed to his second Paralympics in September, in Rio. There, he joined the first triathlon event in Paralympic history—as a newbie to the sport.

Born with one hand, Hammer started as a runner. A four-time NCAA academic and track All-American (2006-09), he competed in the 2012 Paralympic Games (1,500 meter and marathon). Since then, he added biking and swimming to his athletic endeavors and dialed back on the running.

Hammer’s motto is: “Accept the challenges, so that you may feel the exhilaration of victory.” It was on a poster above his bed as a kid, he says, and he has internalized its message as an adult.

Also a husband and father, Hammer says he’s gotten good at balancing things in thirds—three events in his sport and three ways his personal life is being pulled. The U has offered him the unique opportunity to perfect that balance. “I’m fortunate to be a student and working toward a degree that will result in a career long after my athletic days are done,” he says. “I’ve also been able to combine my academic and athletic interests in my research, and that has been a rewarding experience.”

Hammer noted that he was looking forward to his second Paralympics and representing Team USA in Brazil. “No matter where we race, it is always a huge honor to wear the red, white, and blue,” he says.