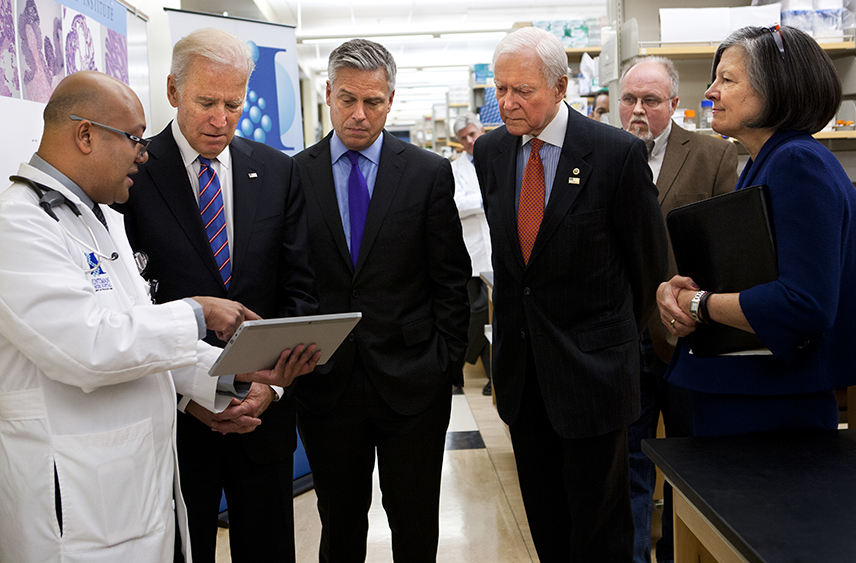 The Huntsman Cancer Institute (HCI) hosted Vice President Joe Biden in February, taking him on a facilities tour and giving him a chance to discuss eradicating cancer with other local leaders.

During his visit, the vice president got an inside look at the Utah Population Database and participated in a roundtable discussion with Huntsman Cancer Foundation board chairman Jon Huntsman, Jr.; CEO and director of HCI Dr. Mary Beckerle; Senator Orrin Hatch; and local cancer survivors and physicians.

HCI manages the largest genetics database in the world, with more than 22 million records linked to genealogies, health records, and vital statistics. Biden expressed a desire to figure out how this and other models of excellence created here could be reproduced. “If this could be a model that would be replicated throughout the country and the world, I honest to God believe that we would make exponential progress,” he said.

The vice president’s visit was part of a national “listening tour” of the nation’s top cancer institutes. Biden heads up the White House‘s “Moonshot” initiative to double the rate of progress toward curing cancer. In April, Beckerle was invited to participate in the Moonshot initiative as a member of a new Blue Ribbon Panel tasked with advising the National Cancer Advisory Board.

The fight against cancer is both a public and personal quest for Biden, who lost his son Beau to brain cancer last year. 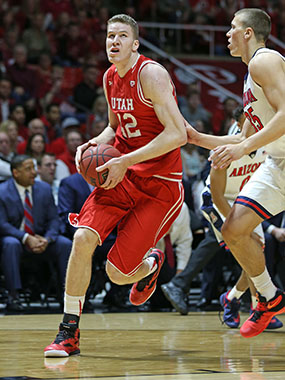 The decision last year to put off the NBA draft to play another season paid off for both Jakob Poeltl and the Runnin’ Utes basketball team. In March, Poeltl was named Pac-12 Player of the Year. Teammate Brandon Taylor also received recognition as Pac-12 Scholar-Athlete of Year. Both players helped lead Utah to a 24–7 overall record and 13–5 league mark that earned the Utes second place in the Pac-12 standings for the second straight season.

Poeltl, a sophomore from Austria, averaged 17.5 points and 9.1 rebounds, and shot 66 percent from the field during the regular season. Standing seven feet tall, Poeltl is the ninth Ute to win a conference player of the year award in men’s basketball, and the first in the Pac-12 era. He ended the regular season as the league’s No. 2 scorer, No. 3 rebounder, and No. 5 shot-blocker.

Poeltl is also the recipient of the Kareem Abdul-Jabbar Award for being the best center in men’s college basketball. He was selected as the Pete Newell Big Man of the Year, and named as an All-American by the AP, CBS Sports, ESPN, The Sporting News, Sports Illustrated, NBC Sports, and USA Today.

In April, Poeltl announced that he’s entering the NBA draft. “Staying a second year made me a better player,” he says. “But I know now that declaring for the draft is the best thing for my career at this point.” In a gesture to say both goodbye and thank you, the U framed his jersey (No. 42) as a keepsake and presented it to Poeltl at the press conference where he made the announcement. 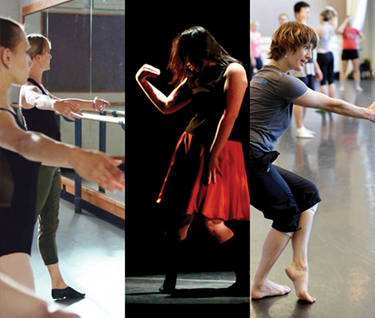 In July, the departments of Ballet and Modern Dance will unite to form the first School of Dance in the Intermountain region and one of only a handful across the nation. Housed under this new administrative structure, the individual disciplines of ballet and modern dance will continue their esteemed legacies, with expanded opportunities for collaboration.

“Our two dance disciplines have a long tradition of excellence and prominence here in the state and across the world,” says College of Fine Arts Dean Raymond Tymas-Jones. “The world of dance has evolved dramatically since the departments’ founding 60 years ago… this structural shift is necessary for the next iteration of our legacy of success.”

The most significant change will be seen on the administrative side. The new structure preserves the individuality of each discipline and facilitates greater interdisciplinary education and research opportunities across multiple dance genres. The School of Dance will continue to award degrees, certificates, and minors in the specialized disciplines of ballet and modern dance.

This change comes after several years of thoughtful discussion and with support of the faculties of the two disciplines. It will be the second school in the College of Fine Arts, joining the School of Music alongside the departments of Art & Art History, Film & Media Arts, and Theatre.

New Dean Takes the Reins at School of Dentistry 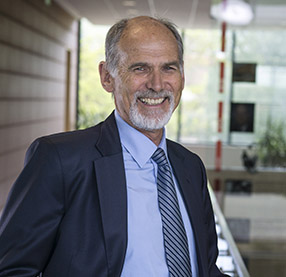 The University of Utah welcomes Wyatt Rory Hume as the new dean of the School of Dentistry. Hume has led dental schools and served in top posts at universities in Australia, the Middle East, and the University of California school system for more than 30 years.

“Dr. Hume brings a depth and breadth of international experience as a leader that is both rare and impressive,” says Vivian S. Lee, Utah’s senior vice president for health sciences and CEO of University Health Care. “I look forward to seeing him lead us to become a top-10 program in the next decade.”

Hume received his dental and doctoral degrees from the University of Adelaide in South Australia and then went to the University of California, Los Angeles, School of Medicine as a postdoctoral fellow in pharmacology. “This is a unique and very appealing opportunity to continue the process of building a great school of dentistry within the vibrant and successful academic and health care environment that exists at the University of Utah,” says Hume.

The School of Dentistry welcomed its first class in August 2013 and moved into its new facility, the Ray and Tye Noorda Oral Health Sciences Building, in April 2015. The school’s first class graduates in 2017.

Two University of Utah professors received 2016 fellowships from the John Simon Guggenheim Memorial Foundation. Nadja Durbach, professor of history, received an award for European and Latin American history, and Melanie Rae Thon, professor of English, was recognized in the field of fiction writing.

Created in 1925, the Guggenheim Fellowships are awarded to those who have made impressive accomplishments in their respective fields and exhibit exceptional promise for the future. For 2016, the foundation received nearly 3,000 applications. “The Guggenheim Fellowship is among the most prestigious forms of recognition available to scholars,” says Dianne Harris, dean of the College of Humanities.

Durbach is a historian of modern Britain who specializes in the history of the body. Educated at the University of British Columbia and Johns Hopkins University, she joined the U in 2000. During her Guggenheim Fellowship, Durbach will be working on a monograph titled “Many Mouths: State-Feeding in Britain from the Workhouse to the Welfare State.”

As a teacher and writer, Thon is devoted to the celebration of diversity from a multitude of perspectives by interrogating the repercussions of exile, slavery, habitat loss, genocide, and extirpation. Her most recent books are Silence & Song and The 7th Man. She is also the author of the novels The Voice of the River, Sweet Hearts, Meteors in August, and Iona Moon. 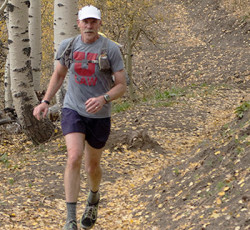 Kudos to Dean Bob Adler for completing a 100-mile race in April to raise scholarship funds and awareness for the College of Law’s 100/100 initiative. The initiative sets an ambitious goal of attaining 100 percent bar passage for first-time takers and 100 percent full-time professional employment for new graduates. Adler blogged about his training for months, challenging the community to get involved in the initiative. Several students accompanied Adler during the last eight miles of the race, which took place just outside of Zion National Park. 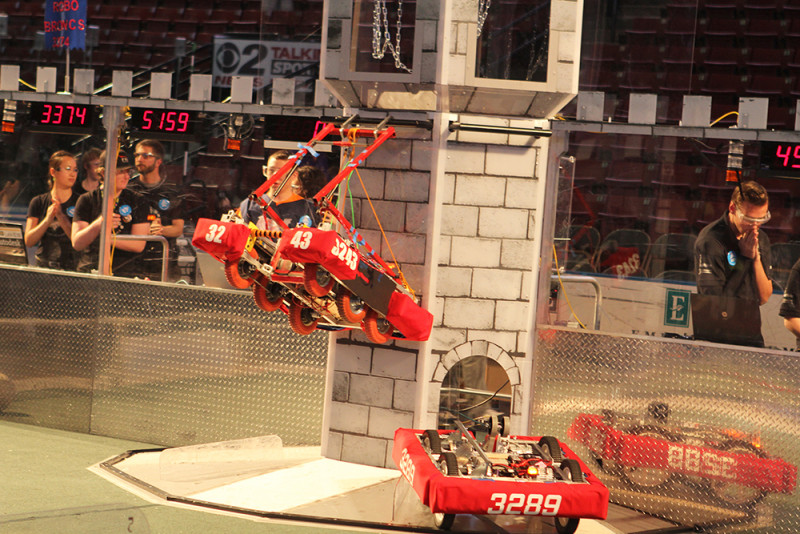 In March, the Maverik Center in West Valley City was turned into a giant robotics battlefield with blockades, catapults, and cardboard castles. The U’s College of Engineering sponsored the 2016 Utah Regional FIRST (For Inspiration and Recognition of Science and Technology) Robotics Competition, which attracted more than 40 high school teams from 12 states and Canada. The teams had two months to design and create robots to specific standards and then two days to battle it out. The event, which saw more than 5,000 people in attendance this year, is designed to get kids interested in engineering, programming, and science.