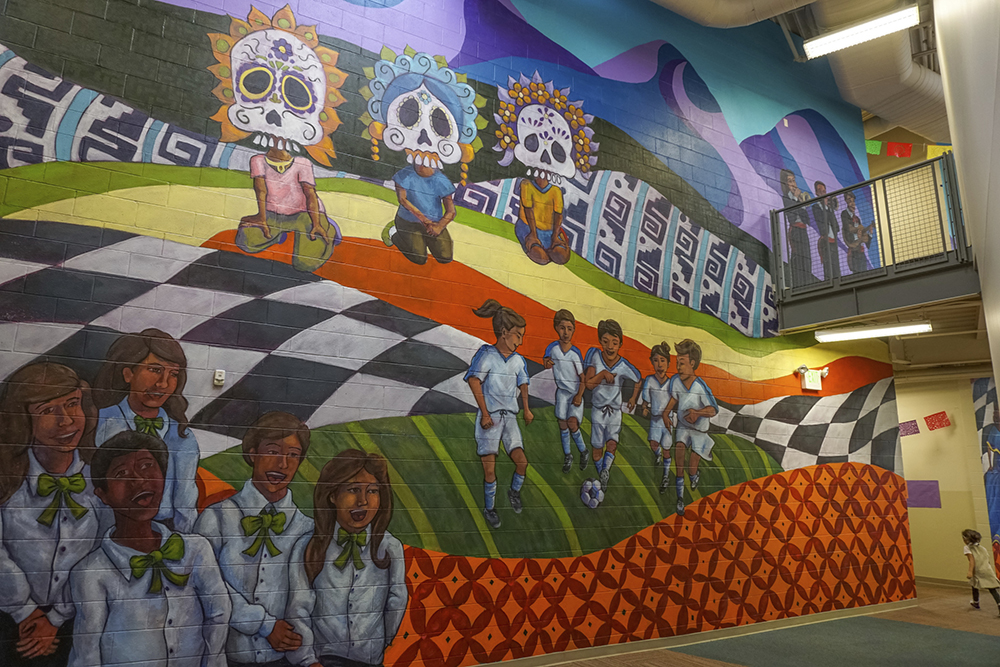 Lenguaje de Esperanza (Language of Hope), a 1,500-square-foot mural designed and painted by students from Kim Martinez BFA’98’s art class at the University of Utah, was unveiled in December at Esperanza Elementary, in West Valley City, Utah. The school has a student body nearly 98 percent Latino, and the principal, Eulogio Alejandre, wanted his school to not just tolerate its culture, but to celebrate it. The stunning result is a cultural tapestry reflecting the diverse symbols of identity of the students who inspired it.

Learn more about Martinez and her mural projects in the 2011 Continuum profile online here. 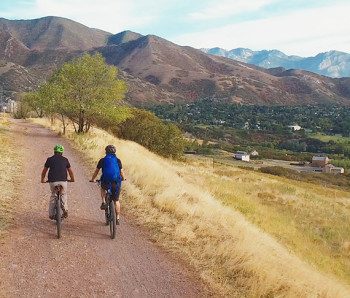 U students and Salt Lake City residents both love to recreate along the 100 miles of Bonneville Shoreline Trail that lie directly behind campus. On any given day, that can include hundreds of hikers, trail runners, mountain bikers, and/or dog walkers. Now, thanks to a partnership between the National Park Service and the U’s Department of Parks, Recreation, and Tourism, students can volunteer as stewards of the trail as part of the Urban Ranger Program that debuted last fall.

Traveling by bike and foot between Hogle Zoo and the top of Dry Creek Canyon, the rangers provide visitor service information; educate trail users about responsible trail etiquette, ecology, and management; and help keep the area clean. Seven rangers manage about 10-14 student volunteers each week throughout the academic year. In total, the program plans to engage 40 rangers, 300 school-aged youth, and 400 U student volunteers over two years.

“The program perfectly aligns with our department’s commitment to foster the next generation of resource stewards and outdoor health advocates,” says Matt Brownlee, assistant professor of Parks, Recreation and Tourism and co-coordinator of the Urban Ranger program.

Georgia Dabritz One of 10 College Athletes to Win NCAA Award 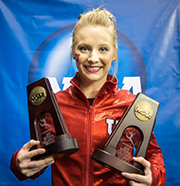 Utah gymnast Georgia Dabritz, who as a senior last year won the NCAA uneven bar championship while leading Utah to a runner-up team finish, received the 2016 NCAA Today’s Top 10 Award. The award is given each year by the NCAA to honor 10 outstanding senior student-athletes across all divisions, male and female, from the preceding calendar year.

Dabritz received her award at the Honors Celebration during the NCAA Convention on January 15 in San Antonio. She is the third Ute to win the honor. The other Ute winners were gymnast Missy Marlowe BS’93 in 1993 and punter/kicker Louie Sakoda BS’11 in 2009.

Dabritz, a 16-time All-American, is the only gymnast in NCAA history to score a perfect 10.0 on the uneven bars in both the NCAA semifinals and Super Six. Winner of the AAI Award for Senior Gymnast of the Year, a team captain, and a three-time Utah MVP, she led Utah to back-to-back Pac-12 championships and captured six individual Pac-12 titles. She won every major Pac-12 award during her career, made three Pac-12 All-Academic teams, and held a 4.0 GPA her last semester as a competitor. She expects to complete her degree at the U this semester. 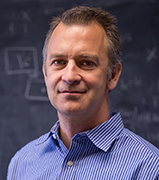 University of Utah mathematician Christopher Hacon and three colleagues have won the 2016 American Mathematical Society E.H. Moore Research Article Prize—an honor so prestigious that it is awarded only once every three years. “It’s definitely a big deal, and it’s great they chose to recognize my field of research,” says Hacon, who received the award January 7 at the Joint Mathematics Meetings in Seattle, Washington.

This is only the latest in a series of honors for Hacon. He was named a Simons Foundation Investigator in 2012. A year earlier, he won Italy’s top math honor, the Antonio Feltrinelli Prize in Mathematics, Mechanics and Applications. In 2009, Hacon and McKernan received the American Mathematical Society’s Frank Nelson Cole Prize in Algebra.

Hacon, a native of Manchester, England, graduated from Italy’s University of Pisa with a bachelor’s degree in mathematics, and later obtained master’s and doctoral degrees in mathematics at UCLA. He has been teaching math at the U for 18 years.

U Forces Unite to Bring Basketball to Hartland Kids 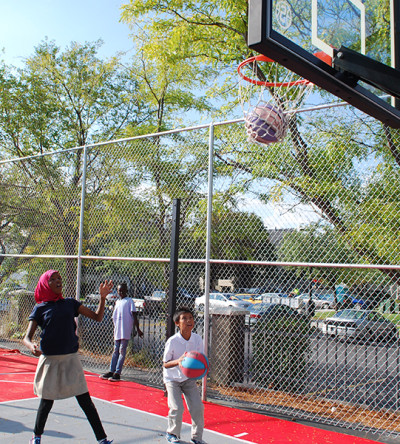 Last summer, the University of Utah’s College of Social and Behavioral Science and the local yogurt shop Ugurt, started by U alumni, joined together to raise the remaining funds needed for a great cause—kids and basketball. The children are mostly refugees and other minorities who live on the west side of Salt Lake City and attend the youth program at the U’s University Neighborhood Partners (UNP) Hartland Partnership Center. Hartland is a program of UNP that brings together University departments, local nonprofits, and residents for reciprocal benefit. The kids had been yearning for a basketball court since 2008, when their old court was closed due to safety concerns associated with evening gang activity.

In spring 2013, the U held its first annual Community Engagement Day in which students, faculty, and staff are encouraged to participate in a one-hour walkathon around campus and donate to a U-related endeavor. Through the event, more than $8,000 was raised for a new court at Hartland—not quite enough to build it, but enough to begin planning. U architectural students submitted design ideas, which engaged their skills and is an example of the collaborative work UNP supports by aligning University and community resources.

In 2015, with the additional funds in place, UNP was able to install a lockable, fully fenced 20-foot-by-36-foot soft-surfaced half-court that addressed concerns about liability and loose balls. By last fall, kids were playing ball on the court every day—a dream come true and made possible by the generosity and thoughtful consideration of many.

Read more about the Hartland Partnership Center in the Continuum feature here.

U Chemist Honored By China’s President 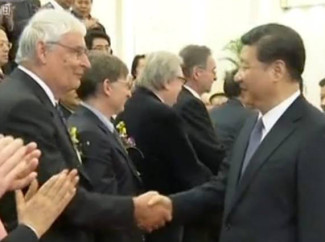 U chemist Peter Stang shook hands with Chinese President Xi Jinping after being honored among six foreign scientists with China’s 2015 International Science and Technology Cooperation Award. “I said ‘thank you’ to him in Chinese and he smiled,” says Stang, recalling the January 8 award ceremony in the Great Hall of the People on Tiananmen Square in Beijing.

This is Stang’s second big award from China in recent months. Last fall, he went to China to accept the 2015 China’s Friendship Award, which is that nation’s “highest award for foreign experts who have made outstanding contributions to the country’s economic and social progress.” And in 2011, he shook hands with our own current head of state, Barack Obama, when he received the National Medal of Science.

Stang is a pioneer in supramolecular chemistry—the spontaneous formation of large, complex molecules from predesigned building-block molecules. Such molecules have uses in cancer treatment, drug delivery, and oil refining. He has collaborated in research with Chinese scientists, worked closely with them as editor of the Journal of the American Chemical Society, and served as a foreign member of the Chinese Academy of Sciences.

A Distinguished Professor of chemistry and former dean of science, Stang joined the U in 1969, which makes this his 47th year on campus. 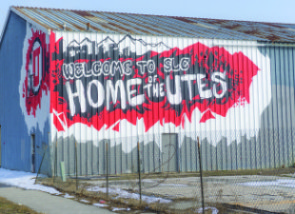 U fans traveling to Salt Lake City via Interstate 15 will notice something new on their drive to campus. A painting celebrating the city as “Home of the Utes” has been created at 429 W. 600 South. The mural, 75 feet wide by 25 feet tall, took local artist Douglas Wilson BFA’09 about a month to design and paint. It is one of several initiatives of Utah Athletics to expand its brand into downtown.

U Names New Director of the Hinckley Institute of Politics 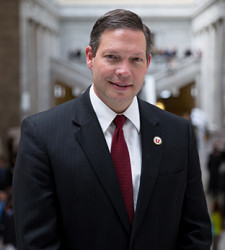 The University of Utah has named Jason Perry JD’99 the new director of the Hinckley Institute of Politics. In addition to becoming the institute’s fifth director, Perry will continue to serve as the U’s vice president for government relations.

U President David Pershing emphasized that the dual role will be a natural fit, as Perry’s work in government relations will allow him to foster new learning opportunities for Hinckley Institute students.

Perry became interim director of the Hinckley Institute in June 2015 following the departure of Kirk Jowers, who left his decade-long leadership post at the institute to pursue a career in private industry. Perry became vice president for government relations at the U in 2011 and is also an adjunct professor at the U’s S.J. Quinney College of Law. Prior to his arrival at the U, Perry served as the chief of staff to Utah Gov. Gary R. Herbert, helping guide a successful transition team and a landslide victory for the governor in the November 2010 election.

“Politics matter. The activities of our elected officials and the work of government bodies impacts all Utahns,” says Perry. “I’m honored to be in a position to continue to ensure the next generation of citizens is engaged and informed.”