Author Zoe Murdock chronicles a journey back in time  leading to self-discovery. 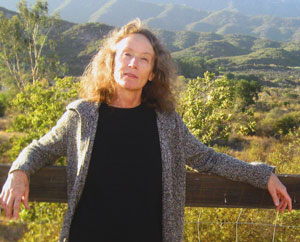 Murdock near her home in Ojai, Calif.

Inspired by true events, Torn by God is a drama that unfolds in a small town in Utah in the late 1950s. It chronicles the tribulations suffered by the Sterling family when the father claims to have had a vision that ultimately leads him to become involved with a local fundamentalist group of polygamists under the sway of “Brother Reuben.” The father comes to believe that the Mormon church never should have renounced the practice of polygamy and that it is something God demands of him.

The 12-year-old narrator of the story is a witness to the slow destruction of her parents’ marriage as her father becomes increasingly involved with the sect and her mother sinks into depression and illness. Ultimately, the father abandons the family, as does the mainstream Mormon community, and it is left to the girl to take care of her sick mother and little brother. 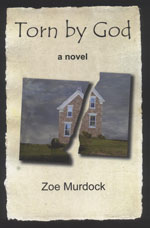 Even though the book is a work of fiction, the practice of polygamy had a direct effect on Murdock and her immediate family. In Torn By God, the author examines her own life and, in the process, discovers much about the influence that fundamentalist religious belief in general has on individuals caught in its spell.

Following is a Q&A with the author:

Writing the book seems to have been a pivotal point in your life. Do you agree? If so, how has the publication of the book affected you?

Yes, it was pivotal, not only in terms of understanding a profound experience of my childhood, but it was also my first novel. I wrote many, many drafts. Then, on the advice of an agent at William Morris, I took five more months to completely rewrite the novel, changing the protagonist from an 8-year-old to a 12-year-old. With each new draft, I learned more about my parents, more about myself, and more about the Mormon environment I grew up in. At the same time, I was learning how to tell the story.

You’ve been writing since you were a girl. What inspired you to revisit, albeit in fictional form, the trauma of your childhood?

As a child, I knew there was a period when my father explored polygamy, and I knew the prospect of living that old Mormon doctrine was very disturbing to my mother, but they were pretty tight-lipped about what was going on. I didn’t fully understand how badly my mother was hurt until she died and I read the poems she had hidden in the back of her closet. That was the first catalyst for writing Torn by God, but it lay buried inside me for many years. When my father died of Alzheimer’s several years ago, I read the notes in his secret journal. That’s when I saw the other side of the story, and I knew I had to go back in time and try to reconstruct what really happened between them. Torn by God is the chronicle of that journey back in time.

The question of polygamy as practiced by followers of the FLDS religion (Ref. 1) has drawn national attention in recent years, and a number of books have been written on the subject. How do you think your book portrays the FLDS religion as it relates to mainstream Mormonism?

Although I grew up just down the road from the Alta Academy where the [Rulon] Jeffs family (2) lived and I knew of the FLDS group from an early age, the polygamist group in my novel is not based on members of the FLDS. Brother Reuben, the polygamist leader in the story, is a construct of my mind based on my concerns about people who put themselves in the role of interpreting God’s word, especially when they use that power to further their own self-serving objectives. However, when I was about halfway through my second draft, the FBI captured Warren Jeffs [then FLDS church president (3)], which was followed by a string of other events in the news related to polygamy. All that media coverage gave me a great deal to think about as I continued writing the drafts of my novel. I’m sure some of those thoughts worked their way into the story.

My novel explores the relationship between mainstream Mormonism and fundamentalist offshoot groups in terms of what might motivate an LDS person to join a group such as the FLDS. In working through my parents’ situation, I got a glimpse of the confusion that must have filled the minds of those who lived during the transition period after the LDS church rescinded polygamy [in 1890]. My father’s grandfather had three wives. He was close to Brigham Young and was one of the men who had to give up the practice. Reading my father’s journal, it was evident that he took the early doctrine of the church very seriously. Along with polygamy, he felt our family should be living the Law of Consecration (4) and other early practices. He believed that was something a righteous man should strive for and that living by the original doctrine of the church was necessary to achieve that level of exaltation.

Writing Torn by God helped me understand that while it was devastating for my mother to contemplate living the law of plural marriage, my father had his own pain and confusion. Even to the end of his life, when he was deeply afflicted with Alzheimer’s, he was still looking for God. He was still trying to find his way to the Celestial Kingdom (5).

How did your experience as a student at the University of Utah influence your writing career, if at all?

I started attending the U of U shortly after my mother died. It was a profound period of my life, as I was trying to comprehend her death and her poems. I took a philosophy class from Professor Bill Whisner at that time, which forced me into a deep confrontation with my own mortality. I also took a writing class from Stephen Pett where I wrote some of the first stories about that 12-year-old period of my life. Then I found Professor David Kranes and signed up for every class he offered. He was a marvelous teacher and became a good friend. He has had a great influence on my writing. Under his guidance, I developed an interdisciplinary degree in human cognition wherein I studied language and concepts of specialization and how they affect perception. I wanted to know how our beliefs affect our minds and cause us to see the world in a particular way, which in turn causes us to act in particular ways. This is a primary concern in Torn by God and also in the novel I’m currently working on. I explore the nature of mind in all my stories. I try to capture the unique quality of my protagonist’s mind, the experience and beliefs around which it is organized, the rhythm and voice of its expression.

What about your personal life?

The most important thing that happened to me while I was at the University of Utah was that I met my husband, Everett Murdock [MS’69 PhD’70 MA’81]. He had finished a doctorate in educational psychology and was working on another graduate degree in creative writing. We met in a playwriting course taught by David Kranes. Later we ended up together in a course on structuralist literature taught by Francois Camoin (a wonderful class, by the way). We realized that we were both looking for the same thing in life, to always put ourselves in a position to learn something new. After graduate school, we owned and operated a technical writing company, until Everett accepted a professorship at California State University, Long Beach. I worked on grants and picked up a couple of master’s degrees while we were there. Today, we teach an advanced fiction writing workshop in California. We have met an amazing variety of writers and have learned as much from them as they have from us. We are now both working on novels and write every day, sitting side-by-side at our computers. We often switch chairs to give each other feedback. After we complete our writing for the day, we go out for a nice long run on the mountain trails near our home.

Murdock has given readings of her book throughout the Intermountain West since its publication. She is presently working on a new novel about a man finding himself as he loses himself to Alzheimer’s. She elaborates on her books and her motivation for writing on her Web site here.

Why do you go by the name of Zoe, when your given name is Susan?

I started using the name some years ago when I was writing in a stream-of-consciousness style that I’ve come to think of as “mind-mapping.” I would start from an impulse in the present moment (usually an emotional roadblock in my life), then I would track that feeling back through time, moving through present and past tense, from “third-person objective” to “second-person accusatory” to “first-person acceptance.” I always seemed to arrive at a point in my childhood where I would discover the source of the feeling. It was an amazing journey, not only of self-discovery, but it also taught me a tremendous amount about writing, the effect point of view has on a story, the power of tense, how the rhythm of a story can carry the reader along. So what does this have to do with my name? While I was exploring these mind maps, I could feel I was changing. I was tracking what I thought of as the essence of my life. Zoe means “life” in the Greek language, so I took that name.

Do you have a new writing project under way?

I’m working on a new novel about a man finding himself as he loses himself to Alzheimer’s. Once again the story is fictional but is inspired by my parents. It is a story about a man, with the beginning stages of Alzheimer’s, who finds his wife’s poems hidden in the back of her closet after she has died. Her poems force him to see that he didn’t really know her at all, a realization that sets him on a journey of discovery. This is not a sad story about Alzheimer’s; rather, it has a great deal of light and humor in it, and some wonderfully entertaining characters. I love writing this story, and I can hardly wait to see how it’s going to turn out.

1.     The Fundamentalist Church of Jesus Christ of Latter Day Saints (FLDS), an offshoot of the original Mormon church, adheres to the practice of polygamy, abandoned by the mainstream LDS religion in 1890.

2.     The Rulon Jeffs family lived in a compound of homes that eventually became the site of the Alta Academy, a private FLDS-run school located at the mouth of Little Cottonwood Canyon in Salt Lake City. Rulon was president of the FLDS church from 1986 to 2002.

3.     The Jeffs and some followers relocated to the longtime FLDS base in the twin towns of Hildale, Utah, and Colorado City, Ariz., around 1998, as Rulon is rumored to have received a revelation that the 2002 Olympic Winter Games would destroy Salt Lake City. Warren Jeffs became FLDS president in 2002, but in 2007 he was convicted of rape as an accomplice for his role in the marriage of a 14-year-old female follower. (The conviction was recently overturned in Utah and a new trial ordered. Jeffs also faces similar charges in Texas.)

4.     The Law of Consecration is also known as “the United Order,” whereby individuals consecrate their time, talents, and possessions to the building up of what LDS followers call the Kingdom of Zion, a new kingdom of God on earth.

5.     The Celestial Kingdom is considered the highest of three heavenly kingdoms, according to LDS doctrine.