Norma Carr, a U alumna and former coach, recalls the struggle for Title IX.

Forty years ago, when the playing fields for women athletes were rocky to nonexistent, coach Norma Carr MS’77 would shed tears when male counterparts shut her teams out of their field houses and gymnasiums. It was a time when there were no summer sports camps for young women, and Carr handcrafted her own trophies to give to her female teams, because competitive sports for them were banned. Before Title IX, which marked its 40th anniversary this year after becoming law on June 23, 1972, women’s sports went unrecognized and unsanctioned at the most amateur levels, and elite competition if you were female was a pipe dream. “Church sports, recreation sports, competitive sports, it was all different for women,” Carr says. 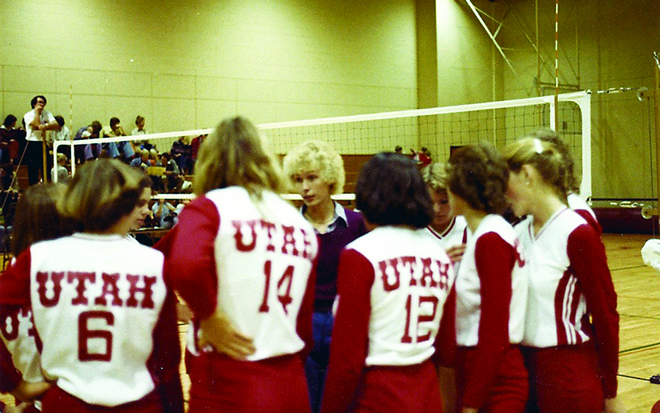 Following Title IX, Norma Carr, center, led the University to a pair of 20-win seasons as the women’s volleyball head coach from 1975 to 1979 and was twice named conference Coach of the Year. (Photo courtesy University of Utah Athletics Department)

Carr, who was the first head coach in both softball and volleyball at the University of Utah and was inducted into the Crimson Club Hall of Fame this year, was instrumental in seeing that changed in Utah, and it wasn’t easy. The discrimination was blatant, and the struggles intense. Carr says she was confronted with opinions that “sports were making girls masculine and that their uteruses would fall out.” She was told “a woman’s place was in the home, having babies and cooking.”

“There were fierce, ugly, verbal battles,” Carr recalls. “We were treading on sacred ground.” Girls who wanted to participate in athletics were branded tomboys, and gender differences were magnified.

The Utah Shamrocks, a league softball team, was playing the only type of high-level sport that women could find at the time, but even then there was little coaching and the players were basically “self-made athletes,” Carr says. Worse, instead of skill or talent, the focus was on what the players wore and how they dressed. Clad in satin uniforms with skirts, Shamrocks players were forced to slide to base on bare legs.

“What guys were doing, girls could never do,’’ Carr says. “For me personally, there was a lot of frustration. … The social and emotional side of life became a challenge.”

Carr remembers growing up in Centerville, Utah, trying to find a patch of field to play baseball—with the boys. There was no sports equipment. Learning to pitch came by throwing a ball against the side of the barn.

After graduating from the U in health sciences, Carr began her teaching and coaching career in northern Utah’s Davis School District. The girls would participate in sports through informal “play days.” The policy at the time was that girls could participate in cheerleading, pep clubs, and drill teams, but not interscholastic sports. Coaches, including Carr, would hold games and matches for their girls anyway, even though such action invariably came with a reprimand. 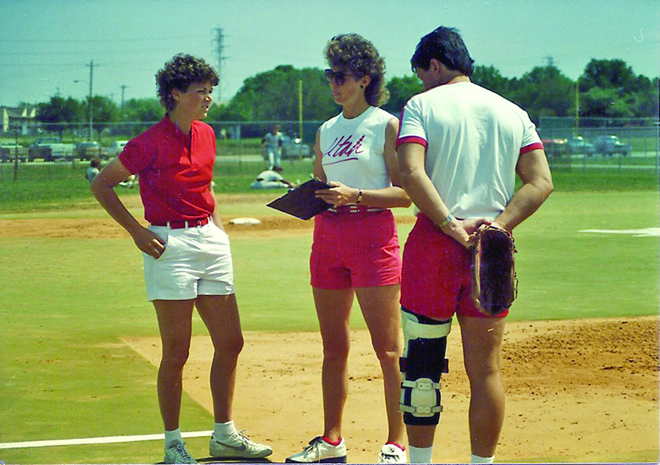 Norma Carr, center, coaches softball in 1987. She is the winning-est softball coach in the U’s history. (Photo courtesy University of Utah Athletics Department)

Soon some girls began playing on boys’ tennis teams, but state officials also deemed that off limits. Parents threatened to sue, and Carr was thrust in the middle of the battle for Title IX. It took years, but eventually girls and women were able to compete in sanctioned sports, and compete they did.

At the U, Carr served as an assistant women’s athletics director from 1975 to 1989. The winning-est softball coach in school history, Carr had a 372-244-3 (.603) record in 14 seasons. She led the Utes to the AIAW College World Series in 1976 and the NCAA College World Series in 1982 and 1985. Carr was named the region Coach of the Year once and the conference Coach of the Year twice.

As the women’s volleyball head coach from 1975 to 1979, Carr led Utah to a 77-58 (.570) overall record—including a pair of 20-win seasons—and a 39-22 (.639) mark in conference play, becoming a two-time conference Coach of the Year. Carr left the U in 1989 to become the athletics director at Salt Lake Community College, where she was the first woman in the state to oversee both men’s and women’s programs. Carr was named to the Utah High School Athletic Association Hall of Fame in 1996. In 2009, she was named National Administrator of the Year by the National Association of Collegiate Women Athletic Administrators.

The success is “exhilarating,” Carr says, especially considering the immense challenges and struggles for women to get there. “The unfortunate part is that it took a law to change it, because a law takes it to the extreme. You can’t change people’s attitudes and feelings with a law. Some of that pain still exists today.”

Many of those male coaches who barred her teams from playing in their spaces have since apologized to her, Carr says. With a change in perspective that time brings, they are grateful, she says, that their granddaughters now playing high school sports enjoy the protections of Title IX. The future for women athletes is unlimited, Carr says, but there are still hurdles.

—Kim Horiuchi is an associate editor of Continuum. 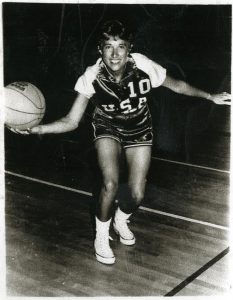 In the 1950s, when Patsy Neal MS’63 was in high school, female athletes had very different options than they do today. If they could find a way to compete at all, it might be on a boys’ team. If an all-girls’ team was cobbled together, they might have trouble finding other female teams with which to compete. But even then, opportunities could be found, and Neal was fortunate to come across one—an opportunity that changed her life.

In her small-town Georgia newspaper, Neal read a short paragraph about women’s basketball scholarships available at Wayland Baptist College in Texas. Suddenly, she saw a way to both continue her education and play the sport she loved.

During her time at Wayland, Neal would become a three-time All-American Amateur Athletic Union basketball player and also served as the college’s first woman student body president. At the University of Utah, she earned a master’s degree and taught in the U’s Health, Physical Education and Recreation Department from 1963 to 1966. She was selected to serve as captain of the United States women’s basketball team in the World Basketball Tournament in 1964, in Peru, and was on the U.S. All-Star team that toured France, Germany, and Russia in 1965.

Arnie Ferrin BS’66 has been inducted into the Pac-12 Basketball Hall of Honor. The four-time All-American, who led the University of Utah to the 1944 NCAA championship and 1947 National Invitation Tournament title, is the U’s first inductee. Ferrin became the first freshman ever to be named MVP of the Final Four. After capping his Utah career with the NIT crown, Ferrin went on to become the MVP of the national East-West All-Star Game. He was drafted by the Minneapolis Lakers and helped the franchise win titles in the BAA (1949) and NBA (1950). Ferrin’s jersey No. 22 is one of seven retired by the U. He was inducted into the National College Basketball Hall of Fame in 2009. Ferrin also served as general manager of the ABA’s Utah Stars and as the U’s athletics director. LM

Stephen Jacobsen BS’67 MS’70 received the lifetime achievement award in the 2012 Utah Genius Awards for his work as a prolific inventor in the field of robotics. Jacobsen is a Distinguished Professor of mechanical engineering at the University of Utah and the founder of Sarcos Inc., a company based at the U that is now called Raytheon-Sarcos and creates robotic suits that give people superhuman capabilities. He also founded seven other companies. He previously has been recognized with election to the National Academy of Engineering, the Institute of Medicine, and the National Academy of Orthotists and Prosthetists, as well as honors including the Leonardo Da Vinci Award from the American Society of Mechanical Engineers, the Pioneer of Robotics Award from the Institute of Electrical and Electronic Engineers, and the Utah Governor’s Medal for Science and Technology.

David Cornell Hartzell, Jr. BS’79 has been elected as supervisor of Clarence, New York. The supervisor serves as mayor of the town, which has a population of 31,000 and is located 25 miles east of Buffalo. Hartzell has served as president of the Clarence Chamber of Commerce from 2007 to 2010, chairman of the Clarence Industrial Development Agency from 2004 to 2012, chairman of the Erie County Industrial Development Agency Leadership Council, and as a member of the Board of Directors of the University of Buffalo’s Center for Entrepreneurial Leadership program and of the Board of Directors of the FBI Citizens Academy.

Chris Johnson MS’84 PhD’90, director of the University of Utah’s Scientific Computing and Imaging Institute and distinguished professor of computing at the U, has been honored by the Institute of Electrical and Electronic Engineers (IEEE) at the International Parallel and Distributed Processing Symposium (IPDPS). Johnson was awarded the IEEE IPDPS Charles Babbage Award at the symposium in Shanghai, China, on May 22. Charles Babbage, who lived from 1791 to 1871, is considered one of the fathers of computing and was the inventor of the first mechanical computer. The namesake award was presented to Johnson in recognition of his “innovations in the area of scientific visualization and their application to computational biomedicine, engineering, and scientific discovery.” Johnson is co-founder of Visual Influence Inc. and co-editor of The Visualization Handbook. He is the recipient of the Utah Governor’s Medal for Science and Technology, as well as the Distinguished Professor Award and the Rosenblatt Prize, both from the U.

Colonel Kevin B. Wooton BGL BGP’85 has been selected for promotion later this year to brigadier general in the U.S. Air Force. Wooton, an Intelligence and Cyberspace Operations officer, is currently the commander of the 67th Network Warfare Wing at Lackland Air Force Base in San Antonio, Texas. The wing is the cyberspace operations force and newest combat wing of the Air Force. Its mission is to operate, manage, and defend global Air Force networks. Wooton deployed to Riyadh, Saudi Arabia, in support of Operation Deseret Storm, and recently to Kandahar, Afghanistan, where he served as director of intelligence. He also led the 25th Intelligence Squadron as a mission commander deployed to the Joint Special Operations Air Component’s Directorate of Operations at Al Udeid, Qatar. Wooton and his wife, Elizabeth Anderson Wooton BSN’79, have four daughters. LM

Paul S. Kirby BA’88 BA’89 MA’91 MEd’01 (PhD, Utah State University), an assistant principal at Hillcrest High School in Midvale, Utah, was named Utah Assistant Principal of the Year for 2011. The award was bestowed by the Utah Association of Secondary School Principals, which will submit Kirby’s name to the national association for national competition. At the University of Utah, Kirby earned a bachelor’s degree in Spanish and political science, as well as a master’s degree in languages and literature, with a Spanish medieval emphasis. He also received a master’s of education degree and an administrative endorsement. In the late 1980s, he worked as a teaching assistant in the Foreign Language Department at the U. Kirby attended the Universidad de Salamanca in Spain for Spanish language undergraduate and graduate courses and earned a doctorate in curriculum and instruction this year from Utah State University. He was a Fulbright Scholar in 1997.

Jennifer B. Danielson BA’95 JD’96 has been appointed president of Regence BlueCross BlueShield of Utah. Danielson joined the company in 1997 and has an extensive health insurance and policy background from previous positions held with Regence in leading the public policy division and on the legal team, as well as with the U.S. Surgeon General’s Office, the Utah Department of Health, and the Utah Attorney General’s Office Health Division. Danielson is the past president of the Utah Health Insurance Association.