The U’s med school has grown from a collection of “frontier doctors” to become one of the world’s best academic medical centers. 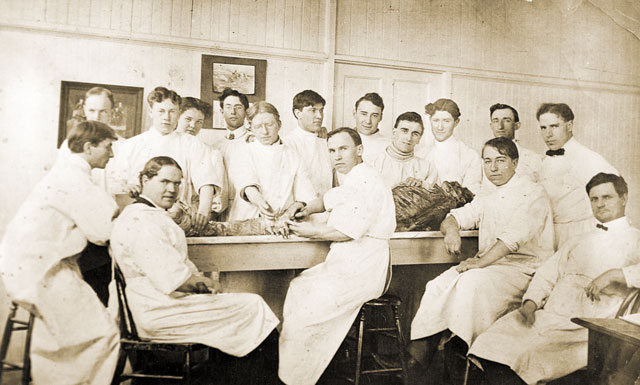 This turn-of-the century photo from the Ralph Vary Chamberlin collection might depict the first medical school class at the U to use a human cadaver. Chamberlin, a med student, once wrote, “At the time the teaching of human anatomy began [at the U, in the early 1900s], a knotty problem faced was that of securing cadavers, as there was then in Utah no law specifically providing for this need. However, the existing statutes seemed to empower the county physician to dispose of unclaimed bodies, and under a liberal interpretation of this power and the cooperation of the Salt Lake County physicians, a sufficient supply was secured to meet minimum requirements from the spring of 1905 through 1905-06 and the first part of the next year. It was an event when the first cadaver was received under this precarious arrangement .”

The University of Deseret, the predecessor to the University of Utah, had some practicing physicians on the faculty, but most of them were “frontier doctors,” self-taught or trained as herbalists. It wasn’t until 1905, a few years after the University moved to its present location, that the Board of Regents established a two-year program in medicine. Some 47 students enrolled in the first classes and upon graduation were awarded A.B. degrees in medicine. Within a few years, however, the medical program almost ceased to exist when most of the faculty resigned during an academic controversy in 1915, caused by what some felt was undue influence in the curriculum of the University by the LDS Church. The regents decided to rebuild the medical school faculty, and, as a result, the program flourished in the years just before World War I. Up until that time, medical classes had been held in various locations around campus. In 1907, the human anatomy lab was sited on the second floor of the mechanical engineering building, while classes were taught in the old Museum (completed in 1902 and later renamed the Talmage Building). In 1920, a new facility was constructed just south of the Normal Building (later renamed after Alfred Emery) at a cost of more than $75,000. Soon a nationwide movement calling for the abolition of two-year medical programs pushed the U’s medical school to expand to four years, which it did in 1942. The subsequent decades saw many prominent names in medicine at the U—pioneers such as Maxwell Wintrobe, Willem Kolff, Leo Samuels, Louis Goodman, and many others. The current medical school facility opened in July 1965; since that time, the University of Utah’s School of Medicine has continued to build a reputation as one of the premier teaching hospitals in the world.

One thought on “The Art of Healing”