Celebrating a Time of New Growth and Regeneration 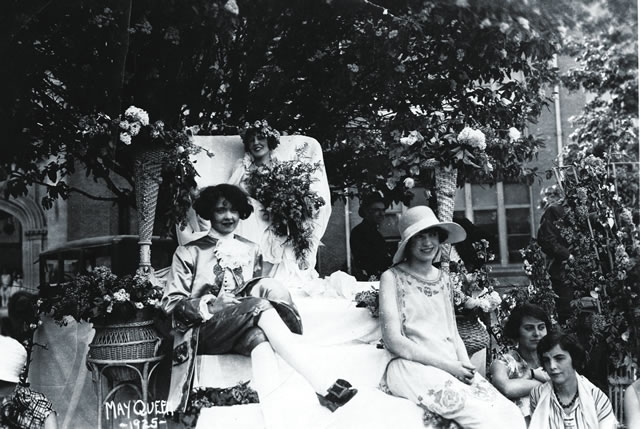 Holding a celebration on the first of May is an ancient tradition in many parts of the world. Likewise, the end of winter has long been a time of festivities at the University of Utah. After a long, cold winter, students and faculty alike are eager to get out of doors and celebrate the renewal of spring. In a 1913 article in The Daily Utah Chronicle, “May-Day Festival Exciting Interest,” preparations for the event were described as “more elaborate this year than for any party heretofore presented by the girls….” Each “coed” was also required to “wear a dress and hat of her own creation… [the fit of which] must be essentially modest.” Not only students and faculty were “heartily in sympathy” with the festival; the Utah State superintendent of schools and officials from other local educational institutions were also invited. A highlight of the celebration was the choosing of a May Queen to preside over the festivities, as shown in this 1925 photograph. The celebratory tradition has carried on, transformed into the current fete RedFest, held in fall. (When the U moved from quarters to the semester system, students were no longer on campus in May, so Mayfest was moved to Fall Semester, and the moniker was eventually changed.) But the urge to make merry with the arrival of spring (and the end of the academic year) remained, so several years ago, the Associated Students of the University of Utah established the Grand Kerfuffle, an all-day outdoor concert that now takes place annually on campus in late April.