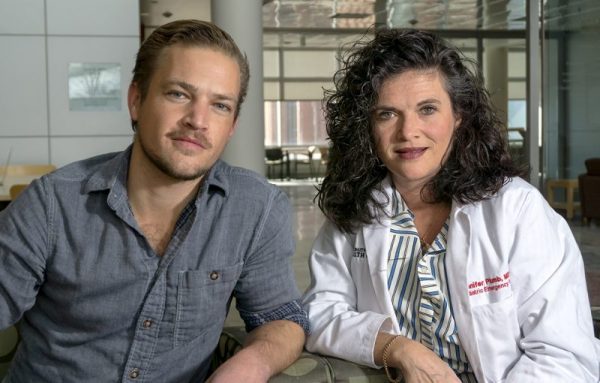 Twenty years ago this spring, Andrew Plumb, an exuberant 22-year-old affectionately known by family and friends as The Eternal Kid, was found unresponsive from a heroin overdose in a Salt Lake City basement. Fearing reprisal, friends who were with him at the time, instead of calling 911 for help, left him alone, buried the paraphernalia in the yard, and fled the scene. He died alone, a victim of addiction.

“After Andy died, I heard from a friend in Emergency Medical Services who said he wished naloxone had been present when Andy overdosed,” says Jennifer Plumb, who is Andy’s sister and an emergency medicine pediatrician at Primary Children’s Hospital. “His words stuck with me.” Last summer, Jennifer MPH’96 MD’00 and her brother J. Samuel Plumb HBA’09 MPH’15 MPA’15 founded the nonprofit Utah Naloxone. 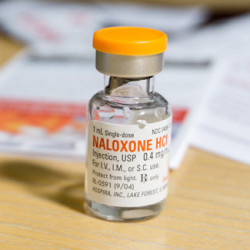 The medication, also known as Narcan, is used to reverse the effects of opioids, especially in overdose. When given intravenously, naloxone works within two minutes. When injected into a muscle, it works in two to three minutes. It also can be sprayed into the nose. The drug is safe and has no side effects. According to Sam, 37 states, including Utah, now have laws allowing individuals to carry and administer naloxone.

Over the years since Andy’s death, Jennifer and Sam, with their parents, have been frustrated by the well-meaning talk of those wanting to help loved ones in trouble with heroin but at a loss for knowing what to do. Then, one evening last summer, when Jennifer and Sam were attending their first family support group at Utah Support Advocates for Recovery Awareness, known as USARA, something changed.

“We listened to heartbreaking stories from parents who had watched their children nearly die from opiate overdoses— powerless to do anything but hope,” says Jennifer. “Some had been denied access to naloxone by multiple medical providers and shamed for even asking. Attending that session made it clear to us that we had to charge forward.”

Newly motivated and inspired to formalize their efforts, they founded Utah Naloxone on July 1, 2015, with a goal to reduce the social stigma around opioid addiction and make naloxone available to as many people as possible, whether they are active opiate users or not—and that user number is growing fast.

U. S. attorney for Utah John Huber joined other local, state, and federal law enforcement officers last winter in warning of an impending “heroin tsunami” based on a serious increase in arrests and confiscations of the narcotic in Utah in the past three years. “The amount of heroin seized by law officers in Utah reflects the increase in usage—46 pounds in 2010 compared to 244 pounds last year [2014],” Huber said in a December 12, 2015, Salt Lake Tribune article. 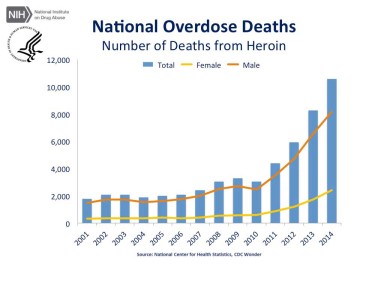 This chart from the National Center for Health Statistics shows the dramatic increase of heroin overdose deaths in the U.S. from 2001 to 2014. (Source: http://1.usa.gov/1QBSs0r)

“We started going out into the community to educate family members, active users, and at-risk youth about overdose recognition and to distribute free naloxone kits and demonstrate how to use them,” says Sam. They also work to educate health care providers at all levels and those who work in the substance use disorder community to increase awareness of and access to naloxone. “From July 1, 2015, to January 21, 2016, Utah Naloxone has distributed more than 1,100 naloxone rescue kits, with 20 documented overdose reversals that we know of,” says Sam.

Their work includes regular visits to Pioneer Park, where many drug dealers and users hang out, and where, in the summer of 1996, a plum tree was planted by the Plumb family to honor Andy. “Despite multiple park renovations, and huge crowds using the park, it is by far the largest and most beautiful plum tree I have ever seen,” says Sam.

Experiencing firsthand the reactions of people who have been equipped with naloxone has been life affirming for Jennifer and Sam. “These are people who many times feel that no one cares if they die, and hearing from us that their lives matter has brought palpable gratitude, relief, and inspiration to them—and to us, honestly,” she says. “We know what it feels like to face the stigma of addiction, and we know that it is simply not acceptable for that to remain the status quo.”

Housed in the U School of Medicine’s Department of Pediatrics, Utah Naloxone has many partners who are advocating for its cause and working to increase public awareness about opiate addiction and overdose-related issues. “But Utah Naloxone is the only organization in the state of Utah that is distributing, educating, and training people to administer naloxone,” says Sam.

In the end, Jennifer says this project is allowing her family to find some peace from the pain they have experienced since Andy died. “Knowing that we are saving other families from the heartache and loss that we experienced has been tremendously healing.”

10 thoughts on “Siblings Unite to Confront the Overdose Epidemic”