A new era marks the return of an old opponent. 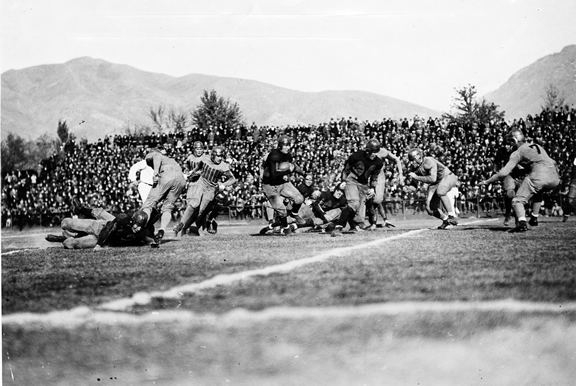 With the move of the University of Utah into the Pac-12, sportswriters are already making much of a potential Utah-Colorado rivalry. But the rivalry has a long history, going back more than a hundred years. The first athletic contests against a Colorado university were in 1902 (when both Utah’s football and track team triumphed), and from there, the rivalry only accelerated. In 1907, Utah’s football team lost to the University of Colorado by a score of 24-10, “completely overwhelmed by the onslaught of the Boulderites, supported by their five thousand loyal rooters,” per a 1909 Utonian (the U’s now-defunct yearbook). In 1908, a headline in the Utah Daily Chronicle (as the paper was known then) proclaimed of the team, “Utah outplays Colorado,” and went on to say that “[Utah Coach Joseph H.] Maddock’s men overwhelm confident, proud rivals in spectacular contest… amid cries of enthusiasm and shrieks of joy ringing from four thousand throats.” During the 1915-1916 football season, Utah again defeated the University of Colorado, as well as every team from other institutions in that state, as part of Rocky Mountain Conference play. In basketball, Colorado declined to even play Utah in 1919, citing specious concerns about interfering with the Buffaloes’ baseball and track training. Colorado football came roaring back in the 1920s, frequently defeating Utah on the gridiron, but the rivalry extended to all sports: baseball, basketball, swimming, wrestling, and skiing. Utah and Colorado were even adversaries in debate, with teams from Utah and Colorado arguing such topics as child labor, centralization of the federal government, and literacy tests for immigrants. The competition was going strong all through the years up to World War II, but by the 1950s, the U’s rivalry had begun to shift away from Colorado to BYU. This year’s move to the Pac-12 isn’t creating a new rivalry, but renewing a long-standing one. Will the rivalry continue when Colorado and Utah meet again on November 25?