Ask Emily Sloan-Pace BA’01 to name a favorite Shakespeare quote, and she’ll probably recite the entire scene or poem by heart. Ask her about technological advances, and she’ll jump into innovations from the 16th century. The Renaissance is second nature to her—the history, culture, and most of all, the great literary works. 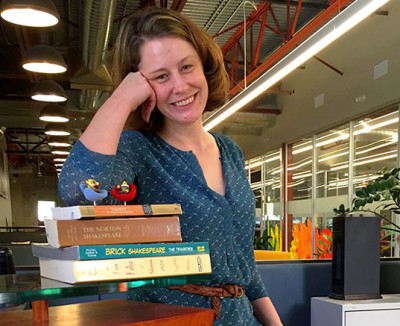 But alas, Emily lives in the 21st century, and she doesn’t live just anywhere. Her home is in the epicenter of global technological advancements—Silicon Valley. And that’s not the only irony in this story. Emily, the Shakespeare expert (her Twitter handle is @ShakespeareProf), gets up every day and goes to work at a booming private software solutions company, Zoho Corporation. So it makes sense that she would open a recent speech to her Zoho colleagues with this question: “How many of you now do something completely different from what you ever thought you would be doing with your life?”

For Emily, it was a phone call from India that changed her trajectory. Up until that moment nearly two years ago, she had a different plan. Inspired by University of Utah professors such as Dean May, David Kranes, Brooke Hopkins, and Mark Matheson MA’85, Emily made up her mind 15 years ago to spend her life studying and teaching literature. After receiving her bachelor’s degree in history from the U (with a minor in classical civilization), she went on to obtain a master’s in humanities from Stanford and a doctorate in literature from the University of California, Santa Cruz (UCSC).

“I wanted to spend my time talking about Shakespeare with college students,” she recalls. “Meter, metaphor, alliteration—all the things your high school English teachers drill into you—thrilled me.” After 10 years in graduate school, thinking and writing about Shakespeare, she began the job search, and that’s when reality kicked in that “Shakespeare is not a growth industry,” as she puts it.

Even with her impressive collection of degrees, tenured academic jobs were very hard to come by. So Emily volunteered, coached Shakespearean actors, wrote freelance articles, helped inmates at San Quentin put on Shakespeare plays, and spent a lot of time applying for academic jobs. She eventually landed some adjunct faculty positions teaching Shakespeare, writing, and a plethora of other related topics. “Mostly, I taught people how to better organize their thoughts, write them in a compelling form, and present them to groups,” she says. “I taught the art of rhetoric.”

What Emily may not have realized at the time is how valuable those very skills are in the corporate world—especially in the tech industry. While she was job searching, another search was going on. The CEO of Zoho, Sridhar Vembu, was seeking ways to improve his employees’ communication skills and expose them to the great insights humanities has to offer. The company’s president, Raj Sabhlok, a UCSC grad, reached out to one of Emily’s former mentors to get a recommendation for a candidate with the right skill set to help achieve Vembu’s vision. The result was the life-changing call Emily received from India.

She admits that at the time, she had no idea what SaaS meant (it stands for “software as a service,” which means software is licensed as a subscription rather than bought outright), but her life as an adjunct faculty member wasn’t exactly stable or financially advantageous, so she pursued the opportunity. Serendipitously, that path led her to the very title she always wanted—Professor in Residence. Only her campus isn’t a university, it’s a corporation. “My job is to think about the culture of our company,” she explains. “To think about the voice of Zoho. We have a lot of smart people here with a lot of big opinions. And part of my role is to help communicate those.”

As far as the transition from her scholarly world to the tech scene goes, Emily says she was terrified (and used Google a lot). “What was someone with a PhD in Shakespeare doing at a cloud SaaS company?” she asked herself. “I was more used to being lost in the clouds, not thinking about how to manage clouds.”

But Emily charged forward, and within her first few months was already developing continuing education curriculum. She says she often draws from theories and ideas she read for the first time in the honors program at the U. Last summer, as part of a two-week writing and rhetoric seminar she taught in India, she assigned her students to read the same book Mark Matheson assigned her to read 15 years ago, A Room of One’s Own by Virginia Woolf. “The book was eye-opening for me when I was 20,” she says. “It was thrilling to see the same was true for the readers in India, especially the women in the class.”

So, this 16th-century dreamer is now embracing the 21st century. “I’ve gotten over most of my trepidation,” she says. “At first I worried that they hired the wrong person for this job. Now, I’ve realized what should have been my bigger worry is that they hired the right person.”

2 thoughts on “Much Ado About Something”