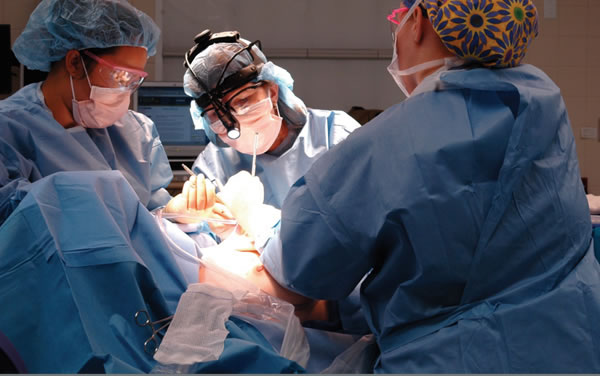 When recently diagnosed cancer patients tell surgeon Leigh Neumayer, M.D., that they need something to calm them down, she replies matter-of-factly, “I’m going to give you information that will calm you down.” A tireless advocate for patient education, Neumayer says to her patients, “Information is power. You can’t control cancer, but you can have control over the decisions you make about your treatment.”

That is no easy task for the 200,000 American women diagnosed with breast cancer each year, because there’s no one-size-fits-all treatment plan. Rather, it’s a complicated decision that requires the patient to balance current medical knowledge with the advice of the physician and her own best judgment. 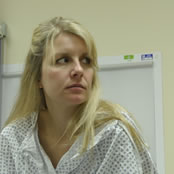 Huntsman Cancer Hospital patient Shauna Smith agreed to allow her mastectomy and reconstruction surgeries to be photographed for the book.

Neumayer has found during more than 20 years of practice that, in general, women want information. The problem is that emotions run so high with a cancer diagnosis that even a surgical oncologist could have a difficult time hearing, processing, and remembering information from just a one-time run-through at appointments. Patients need resources that they, and their family and friends, can digest and refer to later, again and again.

It was a chance encounter in the women’s restroom at the University of Utah School of Medicine that turned out to be the catalyst for Neumayer to collaborate with two University of Utah colleagues, and a medical student, on one such resource: Meet Virginia: Biography of a Breast, a photographic chronicle of a young breast cancer patient’s journey through surgery. Photographer Anne Vinsel MS’85 BUS’95 MFA’02 documents her clinic visits and follows the patient into the operating room for three surgeries (a total skin-sparing mastectomy performed by Neumayer, and two reconstructive surgeries performed by her plastic surgeon colleague Jay Agarwal, M.D.) in the type of graphic photos usually reserved for medical journals and textbooks. Today, every breast cancer patient who walks into Neumayer’s clinic at Huntsman Cancer Hospital goes home with a copy of the book, safely tucked away in a backpack, so as not to inadvertently offend anyone with its graphic subject matter: “blood and breasts,” as Neumayer puts it.

The explicit nature of the book does not make for easy viewing at times. But it does reflect the respect Neumayer and Agarwal have for their patients as true collaborators in their own care. The surgeons invite patients and their families into the rarefied world of the operating room and make a bold assumption that they want to know, step by step, what will happen to them on the operating table. As it turns out, most do. “Some patients are initially resistant to look at the book, but usually that resistance quickly turns into curiosity, and then they’re hooked,” says Vinsel. To give people a visual break from the unflinching surgery photos, the authors interspersed text and marginalia throughout the book. “The advantage of a book is that you can shut it if it becomes too much, and look at it again when you’re ready.”

Vinsel had noticed a flier announcing that Neumayer had won the 2009 Linda K. Amos Award for Distinguished Service to Women. A few moments later, she ran into the surgeon in the restroom. While Vinsel’s day job is to ensure that the U’s 65 accredited residency programs are well prepared for the re-accreditation process, her passion is photography, and she was not impressed with Neumayer’s head shot. She barely knew Neumayer but couldn’t resist blurting out, “Leigh, I could take a much better photo of you.” Neumayer dislikes having her photo taken, but surprisingly agreed. What struck Vinsel as she visited scores of breast cancer Web sites trying to learn more about Neumayer’s profession was how they glossed over the actual surgery. When she delivered Neumayer’s head shots, she proposed the idea of the book. Neumayer, knowing there was nothing like it, agreed to look for a patient.

Three weeks later, 35-year-old Shauna Smith showed up in Clinic A at the Huntsman Cancer Hospital. After having consulted with several doctors in Idaho, the Utah native determined she wanted to have her treatment at Huntsman. “I just knew that was going to be my healing place,” says Smith. What she couldn’t have anticipated at that point was that every step of her treatment would end up documented in thousands of photographs, including many of her breasts. But at the time, she had heavier thoughts weighing on her mind. “I was dealing with cancer, and I said yes, not realizing the large-scale impact it was going to have. I felt honored. An extra benefit was knowing I would get excellent treatment,” says Smith. She also felt it was a gift she could give to other women, especially those who were struggling with a more serious diagnosis. “It was an opportunity to give to the women making challenging decisions, which gave me a sense of peace knowing I could help,” says Smith. An added bonus was that she had Vinsel holding her hand along every step of the way. “I felt like I had a little protecting angel with me.”

For photographer Anne Vinsel, shooting the thousands of photographs to choose from for the book Meet Virginia was trial by fire. There was never any stopping and posing, and she jokes that she pretty much did everything short of hanging herself from the ceiling to get the shots in the operating room. “The harsh lighting in the OR is insane,” says Vinsel, “and shooting surgeons moving their hands is like shooting hummingbirds. They never stop moving.” During the two years she worked on the book, Vinsel notes, she grew to appreciate the incredible endurance and courage of breast cancer patients, and the skill and tact of their surgeons.

Smith was an ideal patient, not only because of her outgoing personality, but also because she wanted to have immediate reconstruction, a procedure that only 20 percent of women who have mastectomies elect to have. The low rate is somewhat confounding for Neumayer and Agarwal, especially because research has shown that breast reconstruction is oncologically safe. In fact, for reasons that remain unclear, the survival rate is even a little higher in patients who have reconstruction. It also seems unrelated to cost. Even after President Bill Clinton enacted the 1999 Women’s Health and Cancer Rights Act (WHCRA), which mandates insurance companies that cover mastectomy to also cover reconstruction, the rate didn’t go up.

Agarwal and Neumayer believe the primary reason that roughly 80 percent of mastectomy patients choose not to have immediate reconstruction is that no one gave them the option. “The whole point of the book is to start the conversation of reconstruction—to give our patients information, so they can figure out what’s best for them,” says Agarwal.

Neumayer thinks there’s an unfair societal attitude that makes many patients feel it’s too vain or superficial to think about breast implants when dealing with a life-and-death issue. To counter that, she insists that almost all of her mastectomy patients at least meet with a plastic surgeon. During an initial consult, Agarwal emphasizes that breast reconstruction is not a cosmetic procedure but rather is about helping make that individual feel comfortable at home and in society.

“I have many patients with mastectomies come in and talk about how they haven’t been to the beach in 20 years, how they never wear necklaces or V-neck sweaters, because they don’t want to draw attention to their chest. They’ll say, ‘I’m embarrassed every time my husband sees me,’ ” says Agarwal, whose mentors at the University of Chicago instilled in him an appreciation of the subtlety and complexity of reconstructing the breast. “As plastic surgeons, we don’t save lives, but we do restore the form and functionality in patients who have suffered something that was disfiguring, whether trauma or cancer. We want to restore life so that these women don’t have a constant reminder of their cancer—so that they can fully move on and return to their normal states in family and society.”

Smith was surprised at how important it was for her to wake up from her mastectomy with an expander in its place. “It was instant gratification to look down after surgery,” says Smith. “Even though it was just a small bump, it helped me feel like I wasn’t maimed—that I hadn’t lost my femininity.”

Agarwal stresses that they don’t push breast reconstruction or in any way suggest that breasts should be the focus of women’s lives. “The decision not to have breast reconstruction is completely legitimate,” says Agarwal, who says he’s seen many patients, especially runners and athletes, who prefer not to bother with breasts after surgery. “We just want to lessen the pain of cancer, and if reconstruction helps that process, then we want to provide women with that option.”

Immediate reconstruction is not the most convenient setup for two busy surgeons, and Huntsman patients are fortunate that Neumayer and Agarwal are so willing to coordinate their clinic and OR schedules. When Neumayer finishes with the mastectomy, Agarwal, regardless of what he’s doing, needs to be ready to scrub in to start the first part of the reconstruction—placing the expander. Vinsel is impressed with how smoothly the two surgeons work together. “I’ve never seen anything like it,” she says.

The surgeons feel that the extra effort is well worth it as they watch the emotional and physical transformation of patients throughout their treatments. “When they come to see me a year later for their annual checkup, they have smiles on their faces,” says Agarwal. “They’re back into their family life. It’s very rewarding.” One of Neumayer’s patients in her 50s told her that every day when she walks out of the house, she knows that part of her is a 10. “We can’t underestimate the power of positive thinking,” says Neumayer. 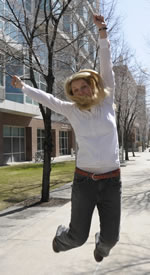 Meet Virginia was truly a labor of love for Neumayer, Agarwal, and Vinsel, all of whom carved out time from their very busy schedules to create the book. Fortunately, they had the help of Ravi Ahluwalia, a medical student interested in reconstructive surgery, who served as IT support, proofreader, art critic, and focus group organizer.

At the end of Meet Virginia, Vinsel’s photographs show Smith jumping and running on the sidewalk outside of the School of Medicine after one of her appointments. She’s now back living in Idaho and working full time as a therapeutic recreational specialist, taking wounded veterans skiing and rafting as a way to help them achieve self-confidence and reduce stress.

Smith says she doesn’t really have any way of knowing how people are responding to the book, but she seems to have a distinct sense of closure about her exceptionally brave role in it. Her gift, figuratively wrapped with a pink ribbon, will now be delivered to the thousands of women who have their journey ahead of them. “The photos are so raw, it’s kind of like looking into my soul,” says Smith. “But I know it will be taken seriously by the women who really need it. That’s rewarding.”

—Amy Albo is a writer and editor with the Office of Public Affairs for University of Utah Health Care.

3 thoughts on “Meet Virginia: Biography of a Breast”