Ana Breton BA’09 is not one to simply accept her circumstances. Instead, she is a creative and innovative individual who looks at her surroundings and says, “How can I make this work for me?”

As a student at the University of Utah, she realized there wasn’t an existing major that would help her accomplish her goal—to become a comedian and TV writer—so she tailored her education to prepare herself for her dream career. “Sometimes life is like a Plinko board,” she explains. “You just have to find your way there—it’s not a direct line.”

Initially pursuing a career in journalism, she realized she couldn’t ignore her passion for film, so she decided to double major. Splitting her college years between The Daily Utah Chronicle and the film lab, Breton kept busy. She also participated in the comedy troupe Friday Night Live at the U, which performed regular shows mixing improv and sketch. “I always wanted to do a little bit of everything,” Breton laughs. “I think my only regret is: I wish I would’ve gone to more football games. I was always working!”

That work-work-work mentality has never quite slowed down for Breton, especially when she met her husband Nick Pappas BS’09 BS’13 (via his column in the Chrony, where he also worked). “One Valentine’s Day, he wrote a column saying he didn’t have a date,” she recalls. “So I just decided to ask him out—because I liked his writing.” Soon, they were seeing each other regularly, and their dates often involved simply getting together and putting pen to paper. “And we have absolutely continued doing that,” Breton says with fondness.

After graduating, Pappas’ bright future in finance took them to The Big Apple. The two were married in 2014 and now share an apartment with their dog, Binks. “We moved here and I thought, ‘This is the time to be pursuing comedy and film,’ ” Breton says. “New York has such a healthy environment for film—all the production companies are here. All the late night shows are here. It was kind of a now-or-never thing.”

She began taking classes at famous comedy club Upright Citizens Brigade, and joined their digital team shortly after that, making comedy videos for the web. Her growing network in the comedy scene led to a job interview for a new show. “When I went to the interview, I kind of freaked out,” she explains. “At the end, I said, ‘I just want you to know that even if I don’t get the job, I’m still going to be watching the show—I’m such a huge fan of Samantha Bee.’ ”

That tactic worked, and after two years “paying her dues” in New York’s comedy world, Breton became a producer of short, funny videos for Full Frontal with Samantha Bee—both on the show and for the show’s online presence. “Working on a political TV show is very involved,” Breton says. “You are hyper-aware of everything that is going on. Because we have to respond to it in a really funny way, and that’s a lot of what my job is.”

Her first lightbulb moment on the show came when then-presidential candidate Donald Trump posted a photo of himself eating a taco bowl. Born in Mexico City, Breton moved with her family to Orem, Utah, when she was 9. She felt her personal passion for immigration and others of Hispanic heritage spur her forward. “I took a picture of Samantha with her own taco bowl, and we tweeted it out and it went viral,” Breton says with a bit of a twinkle in her eye. (The tweet is pretty pointed.) 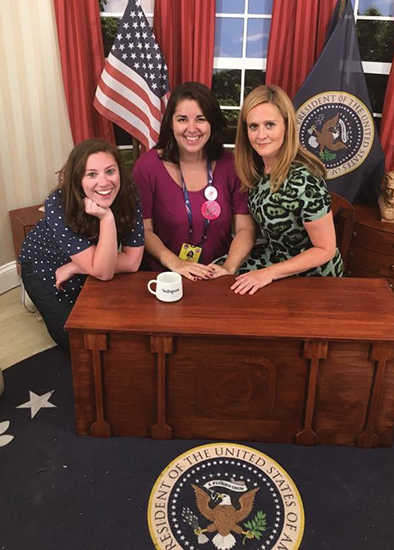 She says she tries not to become overwhelmed with all the details of the nonstop political conversation, but nonetheless it has become a bit of an obsession. However, that may just be her personality. As a creative, Breton is all too familiar with the side hustle—the after-hours endeavors people often have in addition to their “day jobs.” “I find that creative people have to create all the time,” Breton says. “A lot of my coworkers have podcasts and stand-up shows, and we all need to be making things or else we go crazy.”

Although her husband moved to New York for finance, he was inspired by Breton’s success in comedy. He has since left Wall Street behind, was chosen for an NBC internship, and is becoming what Breton calls “Twitter famous” for his wit.

The two have recently collaborated on several projects, such as the 36 Questions Podcast. Based on a study by a psychologist who claims two strangers can become intimate friends after answering a series of certain questions, Pappas and Breton bring two people together each week to test the claim. “Because the people we know here in New York tend to be in the comedy community, it ends up being funny,” Breton points out. Everything in her life has a humorous thread.

Along with the podcast, the couple has worked together on projects including a number of short videos. He writes, then she gives notes, shoots, and edits the final product. The two just wrapped a six-episode web series based on the service Taskrabbit, which allows anyone to hire a stranger to perform a chore for them.

On her own, Breton still works on the digital team at Upright Citizens Brigade, and she also creates videos for The Box, a feminist sketch/talk show. And in her “spare time,” she organized a march protesting the border wall on May 6, to tie into Cinco de Mayo. “I was never ‘into’ political activism; it just came out of frustration,” Breton asserts.

So, how does she manage to stay balanced? Taking walks with Binks, eating good Mexican food, and enjoying the comedy in New York. Laughter is, as they say, the best medicine. And she knows she is doing what she loves.

“People are always going to quit along the way, so that opens up a path for you,” Breton notes encouragingly. “It’s easy to get scared of how competitive it is, but if you stick with it, you can Plinko your way there.”

She laughs at her second Plinko reference, then shrugs. “I really love Plinko.”