“As the ancients understood, truth has its implacable force.” —Les Standiford

On Dec. 16, 2008, dozens of news organizations from around the country descended on Hollywood, Fla., to hear the city’s police chief announce that one of the most disturbing murder mysteries in U.S. history had finally been solved—nearly three decades after the crime.

As novelist and historian Les Standiford MA’70 PhD’73 writes in his forthcoming book, Bringing Adam Home: “More than 27 years had passed since Adam Walsh went missing and was found brutally murdered, and in spite of all the time that had gone by—or perhaps because of it—the case still had the power to mesmerize a nation. This was, after all, an event that had changed how every parent in America viewed the world.”

Maybe you pushed the details out of your mind because they were too horrible to harbor. But surely you recall Adam Walsh and his photo: a cherub in a baseball cap. Nearly everyone remembers the fate of that little boy, because, as Standiford notes in his book, the 6-year-old’s abduction and killing “seemed to mark the end of America’s innocence.”

On July 27, 1981, Adam Walsh was abducted from a Sears store in Hollywood. Two weeks later his severed head was found two hours north of the seaside city in a canal off Florida’s Turnpike. The rest of his remains were never located.

Adam’s devastated parents, Revé and John Walsh, have spent much of the past 30 years raising awareness of the problem and plight of missing children. They formed the Adam Walsh Outreach Center for Missing Children, which eventually merged with the National Center for Missing and Exploited Children. Their tireless advocacy helped spur the passing of the Missing Children’s Act in 1982, the creation of the national AMBER Alert program in 2003, and the passing of The Adam Walsh Child Protection and Safety Act in 2006. After Adam’s death, photos of missing children on milk cartons became common, and national databases were established to link law-enforcement agencies in missing-children cases. John Walsh himself would become America’s most recognized crime fighter as host of the television show America’s Most Wanted. 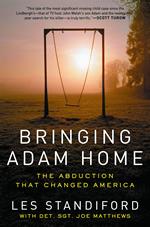 Bringing Adam Home: The Abduction That Changed America, to be published in March 2011 by Ecco Press (an imprint of HarperCollins), is as much a story about a little boy’s unsolved murder as it is about Joe Matthews, the unheralded detective whom Standiford considers the book’s main character.

Matthews was a skilled interrogator and an expert polygraph examiner with the Miami Beach Police Department loaned to the nearby Hollywood police to assist in the investigation. It didn’t take long for Matthews to lock in on Ottis Toole, a known serial killer, as the prime suspect. Yet Matthews was shunted aside, leaving the case to be determined by shoddy procedures, inexperienced detectives, politics, and professional vanity. Toole, despite having confessed to Adam Walsh’s murder, was never charged with the crime before his death in 1996.

“In a day and age of ‘Who cares?’, the narrative of what Joe Matthews accomplished is a tonic for our times,” Standiford says. “There’s a sense of closure and of justice that is crucial, not only for the family but for the nation as a whole, because we all were affected profoundly by the Adam Walsh case.

“Of all my books, this is the one that absolutely deserved to be written and published.”

Standiford, who lives in Miami with his wife, Kimberly, a psychotherapist and artist, has been director of Florida International University’s creative-writing program for 35 years. He has also written or edited 20 books, including 10 crime novels and the best-selling narrative nonfictions—or popular history—Last Train to Paradise, Meet You in Hell, and The Man Who Invented Christmas. What they all have in common, he says, is a “crackling good” story.

In many respects, Bringing Adam Home is a story Standiford had been preparing almost his entire life to tell. He fell in love with riveting storytelling when he was a boy devouring books from the public library in Cambridge, Ohio.

“I’d read everything in the children’s section by the time I was 12 or 13, all the stuff I was interested in—the Oz books, the Hardy Boys, Nancy Drew,” he recalls. “When I read one of those Oz books, I was like the kid who went to the magic show and the guy sawed the pretty lady in half. I said, ‘Wow! How’d he do that? That’s what I want to do.’ ”

Librarian Helen Sunnafrank, to whom he dedicated the novel Deal With the Dead  (the “wonderfully generous… librarian who opened the doors to adventure”) introduced Standiford to books that seemed written especially for him.

“She walked with me when we went into the adult stacks, so I wouldn’t grab Peyton Place, and said, ‘Here are the science-fiction novels, here are the mystery novels.’ So I started reading through Robert Heinlein and Isaac Asimov and Erle Stanley Gardner. She introduced me to living authors who were tuned in to the contemporary world.”

After studying psychology and literature at Muskingum College (now Muskingum University), Standiford made aborted attempts at law school (Columbia) and grad school (Ohio State) before landing at Utah. After receiving a master’s and a doctorate in creative writing and literature, he headed south to direct the writing program at the University of Texas at El Paso. Ten years later, looking for a change, he left UTEP to study at the American Film Institute in Los Angeles. 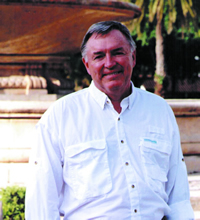 When he heard that Florida International was looking for a director for its writing program, Standiford moved east in 1985. In Miami, Standiford was reunited with his Utah classmate and fellow crime novelist James W. Hall PhD’73, already a professor at FIU. (Between them, the two buddies have written and edited close to 50 books.)

When Joe Matthews came to him in December 2008 with his notes from Adam Walsh’s 10,000-page case file, Standiford knew he had a story of the “greatest possible significance,” one that bridged the so-called “high” and “low” road in literature, particularly in the genre of mystery/suspense.

“I like to think of Bringing Adam Home more as Truman Capote than anything else,” Standiford says. “My model was In Cold Blood. I wanted to write about a case that wasn’t just another interesting murder and homicide investigation but something that changed the world.”

The Adam Walsh case came along in the early 1980s, a time when the media was exploding and more than ever we were learning that crimes were being committed by perpetrators who were not being brought to justice, leading to what Standiford says was a “numbing of moral capacity, a deadening of our sensitivities. But every now and then a crime comes along that is so heinous that it reawakens outrage.”

Thanks to Joe Matthews’ dogged pursuit of justice, Standiford had a story to tell unlike any that he—or many others—had told before. In 2006, Revé Walsh asked the then-retired police detective to reopen the case and to conduct a complete, independent investigation to prove once and for all who had kidnapped and murdered her son. Matthews did just that for more than two years, on his own time and without pay. In the end, the Broward County state attorney and the Hollywood Police were convinced that Matthews had nailed his man: Ottis Toole.

“What happened to the Walshes was the fuel for Joe’s motivation to try to do something for them and the community as a whole,” Standiford says. “Adam was dead five hours after he left that Sears store, so it’s unlikely that anybody could have changed the outcome. None of this is bringing Adam back. But I’m also very aware of the need to come to terms with loss. Going over the record of 27 years of never being told the truth gives me a certain perspective on a struggle with loss.”

To a significant degree, he empathizes with the Walshes.

“As I was coming to the close of a book about a family who had lost a son, my wife and I suffered a similar tragedy. Our 18-year-old son Alexander died unexpectedly in December 2009. The first thing I did was reread the whole book to make sure I accurately represented the Walshes. I wouldn’t want to have taken anything for granted or mischaracterized them, given my own knowledge of that terrible pain.”

Anytime he thinks he’s got it bad, Standiford says to himself: Jesus! Look at the Walshes. “Because of politics, defensiveness, fear, you name it, they went 27 years with nobody being willing to give them a straight answer or proof of what happened to their son. What a shame that was.

“Thank God for Joe Matthews. He’d done his job. Thank God that there’s still somebody who believes in concepts like duty and the need for justice.”

Thankfully, too, there are writers who still tell “crackling good” stories.

—Dave Wieczorek is a freelance writer and editor based in Chicago who writes for numerous general interest and university magazines. This is his first article for Continuum.