Here’s a riddle: What’s the U’s longest tradition linking the present day to 1919? Rattled? Okay, here’s a clue. This hard-forged tradition is strong as steel and represents something even more durable.

Give up? If you’ve been to the new Cleone Peterson Eccles Alumni House, you might have guessed—it’s the U’s graduating class chain. Back in 1919, Adam S. Bennion, a U professor and senior class advisor, had an idea to start a new campus tradition. He met with Eugene W. Sloan, then senior class president, and suggested the idea of a class chain. Each graduating class would produce a link and add it to an ever-growing chain as a symbol of the ties that bind U alumni together. 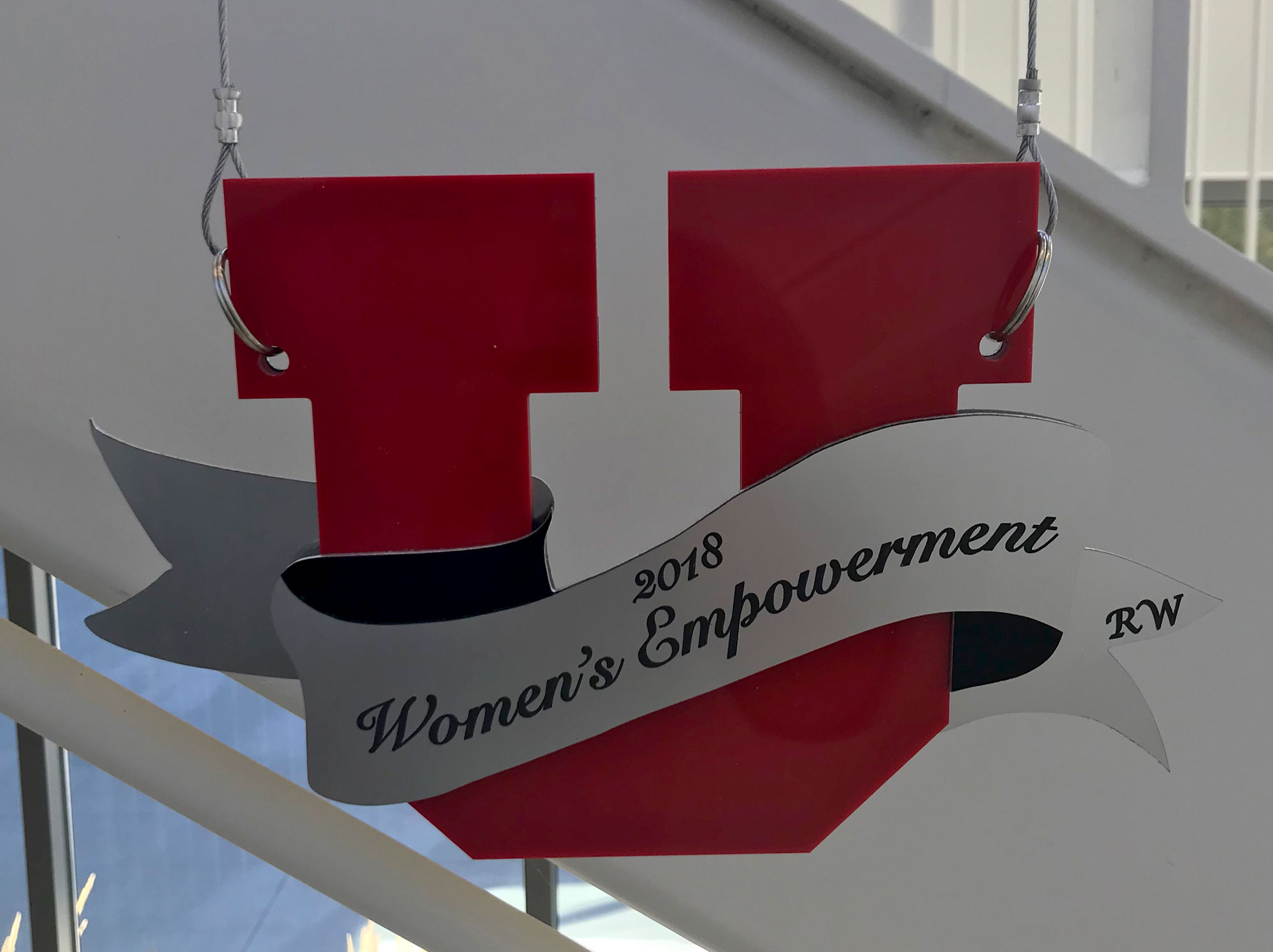 Today, each link is as unique as the students and experiences of that class. The 2018 class link pays homage to the year’s groundbreaking women’s sociopolitical movements and Ruth Watkins becoming the first female president of the University of Utah—a momentous milestone for the U.

Saeed Shihab BS’18, this past year’s vice president of student relations for the Associated Students of the University of Utah, says that in coming up with a design for the link, it helps to define what the year has been not just for the U campus, but for society as a whole. He says the “#MeToo” and “Time’s Up” movements had a huge impact on society in 2018. “Women around the world stepped forward and spoke out against sexual violence and harassment in all its forms,” Shihab says. “So, we took inspiration from those events and designed our link as a block U with a ribbon that reads ‘2018 Women’s Empowerment’ and ‘RW.’ The RW is in honor of Ruth Watkins becoming the first female president of the U.”

Hanging two stories long in an open stairwell at the Alumni House, the links now form an artful focal point that draws the eye. Visitors can take time to find the covered wagon marking the centennial of the pioneers’ arrival in Utah in 1847. Sports fans can cheer when they spot the link noting the U joining the Pac-12 in 2011 and various championships’ commemorative links. Class links from 1977, ’79, ’81, ’83, ’85, ’91, 2004, and ’05 all celebrate victories in men’s and women’s basketball, tennis, gymnastics, swimming, skiing, and women’s softball.

John F. Kennedy is remembered by the class of 1963. The moon walk is up there from the class of 1970, and the first-ever implanted artificial heart in 1983. (Well, not the real heart of course.) The year 2002 recognizes the U hosting the Olympic Winter Games, and 2007 honors U geneticist and Nobel Prize recipient Mario Capecchi. Also commemorated is something that every student and alum has experienced, the ongoing campus construction, from the first year of Orson Spencer Hall in 1956, to 2006, when the theme was “Building a Better U” with a link designed as a screwdriver and a hammer.

When asked what advice he would give to future students who are tasked with designing their class link, Shihab says students should focus on what’s happening in the world at the time, then reduce ideas down to two or three words. “The inspiration for the design will follow. Make your link as impactful as you can. It’s going to be on display for years to come,” he says. “Hopefully you’ll show it to your kids when they enroll in their first year at the U.”

Alum News: Written by Our Own

Snuggle up this winter with a good read from one of your peers.

How an architect and an educator found true love in the natural world.

These U Kappa Kappa Gammas have stayed close for more than 65 years.

One thought on “Links that Bind”