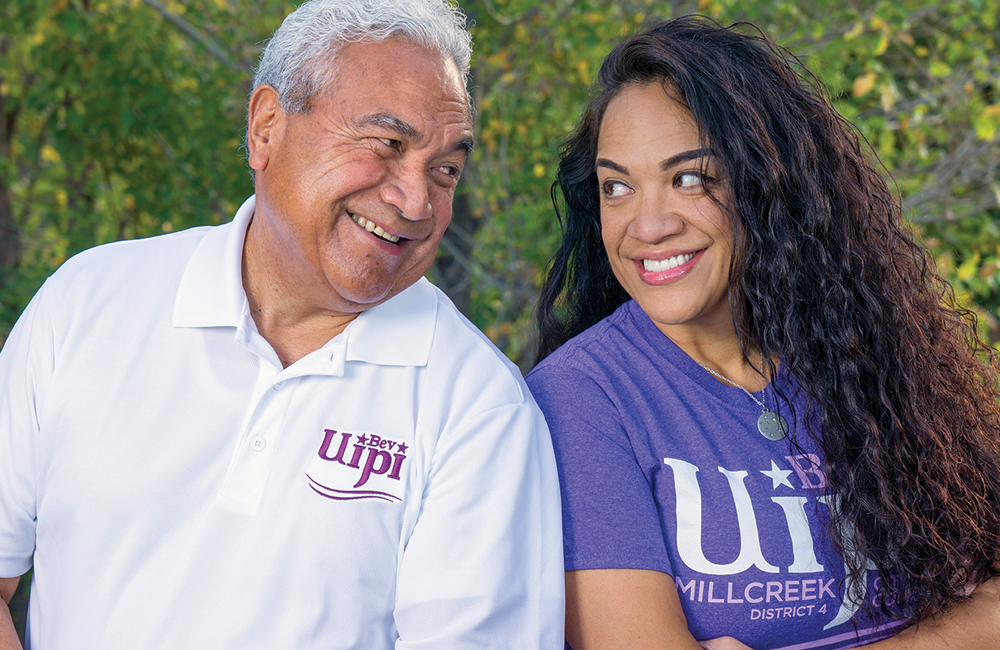 Many families avoid talking about politics when they get together—but not the Uipi family. In fact, they’ve hardly talked anything but politics since last spring, when Bev Uipi MPA’15 decided to run for a seat on the Millcreek City Council.

After graduating from the University of Utah’s master of public administration program last year, Bev decided to use her degree to help start up her hometown of Millcreek. Bev began pounding the pavement in March to meet voters and get input for how to best create a local government for citizens of newly formed Millcreek City, which held township status up until 2015.

How to optimize time spent on the campaign trail is a skill Bev, now 40, learned while growing up in the same area where she herself came to run for office. Her father, Phil Uipi JD’86, in 1991 became the first Pacific Islander to be elected to the Utah State Legislature, where he served as a Republican in the Utah House of Representatives until 1994. Phil today recalls that he didn’t aspire to hold public office but simply followed a road that led him there.

Upon graduating from the U’s S.J. Quinney College of Law, he became one of the few practicing Tongan-American lawyers in Utah, a state where about 1 percent of the roughly 2. 9 million inhabitants are Pacific Islanders, according to the most recent census data available.

Content with building a law practice, starting a real estate brokerage firm, and raising a young family, Phil remembers how one day, a friend pressed him to consider a run for office representing District 36 in the East Millcreek and Olympus Cove areas of Salt Lake County. He decided to give it a shot and quickly recruited his family—including daughter Bev, then a teenager and a standout volleyball player at Skyline High School—to work the front lines of his campaign. The Uipi family canvassed the area together, meeting neighbors and handing out brochures and fliers. And when election day rolled around in November 1991, Phil made history as the first Tongan in Utah to win a seat in the state legislature.

“At first, I thought that because I was running as a minority candidate in an area like East Millcreek and Olympus Cove—where there wasn’t a lot of diversity at the time—I wondered if I could have a hard time earning community support. As the campaign developed, I found that people were very kind to me and my family. As we knocked on doors, people were appreciative of the kind of campaign we ran,” recalls Phil. “They were impressed with the fact that I worked hard and that my wife and my young children were really involved. The good people in our district trusted me and gave me the opportunity to represent them.”

Fast forward to 2016, when Phil again spent many hours knocking on doors, chatting with community members at town hall meetings, and making the rounds at neighborhood fundraisers. This time, however, instead of taking center stage to share his own vision for strong local government, he stepped aside to be the loudest cheerleader for his favorite candidate in the Millcreek City Council race: His daughter Bev.

The father-daughter duo spent the better part of 2016 campaigning together, often with Bev telling the family’s story of political involvement—and her hope to carry on her father’s legacy of service—to interested listeners in the community. Included in the canvassing mix during the campaign was Bev’s son Xane, 13, who got a taste of what his mom experienced in her own teenage years on the campaign trail with his grandpa. Now with the hindsight she didn’t have as a teen campaigning for her father, Bev says she’s more in awe of the barriers her father overcame to win his election years ago.

“I’m so proud of my dad,” she says. “I’m humbled by his boldness to go against all odds in Millcreek back then, and his perseverance to serve. To have my dad knocking door to door with me has meant the world to me.”

Phil and Bev both give credit to the University of Utah for playing an important role in helping them to reach their goal of becoming political candidates. Bev attended several “Real Women Run” events, a program spearheaded by the U’s Hinckley Institute of Politics to foster political ambitions of women. And her coursework through the U’s Executive MPA program provided solid tools to develop a framework for good public policy and leadership practices useful for a city council role, she says. Her work experience includes owning a business, being appointed community relations specialist to former Salt Lake County Mayor Peter Corroon, leading the Millcreek Senior Center to national accreditation as its manager, and most recently, being appointed as deputy director of the Board of Pardons and Parole for the State of Utah.

On November 8, 2016, Bev won the race with 57 percent of the votes. She takes her seat on the Millcreek City Council in January 2017. “I’m honored to have the opportunity to serve my neighbors and friends in the new City of Millcreek as their city councilwoman and hope to represent the wants and needs of my community well,” she says.

Phil says that like most parents, he wants his children to succeed and contribute to the community they live in. “I’ve always advised my daughter that whether she wins or loses is an issue for the people to decide. Her job is to be honest, up-front, and give it her all,” he says. “Bev did that. She is a service-oriented person who cares about others more than she cares about herself.”

Bev is quick to return the compliment. “If I can follow in my dad’s footsteps and build on the difference he started making in our community years ago, it will be time well spent in serving our community,” she says.