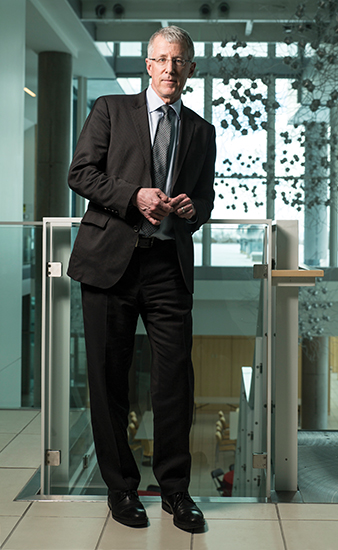 s head of the Office of Fossil Energy in the U.S. Department of Energy, Douglas Hollett MS’79 oversees researching technologies such as clean coal, along with a portfolio including R&D aimed at keeping the nation’s fossil fuels clean, dependable, and affordable.

Hollett visited the University of Utah this past February to discuss the U’s Department of Energy-funded projects with students and faculty affiliated with the U’s Institute for Clean and Secure Energy, its Energy & Geoscience Institute (EGI), and other programs. “It was an honor to have Mr. Hollett at the U to show him firsthand some of our research, such as our rock-on-a-chip technology to test advanced stimulation methods for oil and gas carbon sequestration,” says Raymond Levey, director of the EGI and a research professor in the College of Engineering.

Hollett graduated from the U with a master’s degree in geology. A Connecticut native who received his bachelor’s degree in geology from Williams College in Massachusetts, Hollett says he had been glad to return to the West after summers spent doing research in Colorado and California. He was drawn to the U’s outstanding faculty and ample graduate funding, which, coincidentally, came from the Department of Energy. Additionally, Hollett had skied competitively in college and says the access to world-class skiing in Utah was the icing on the cake.

During his visit this winter, Hollett noted how high-power computing has dramatically changed the energy industry since his graduate school days. He recalled getting his first PC in 1983 and marveled at the advances since that time. “The application of computers and the ability to handle large volumes of complex data are some of the biggest changes to the field,” he says. “These advances have touched all scientific and technical fields and have been at the center of many of the conversations we’ve had today.”

Hollett came to the Department of Energy in 2011 after more than 32 years of experience in the oil and gas industry, most recently as a manager and director for “unconventional new ventures.” His first role at the DOE was as deputy assistant secretary for renewable power in the Office of Energy Efficiency and Renewable Energy, where he oversaw research, development, and demonstration for a diverse clean energy portfolio.

Hollett says that his transition from working in the private sector to public service was not necessarily a logical change, but it has been fun and fruitful. The key to success is to embrace and even look forward to inevitable changes, he says. He urges graduates to be flexible and maintain a passion for their chosen discipline throughout their career, and to constantly upgrade their skills and competencies.

“It’s important to love what you do above all else,” he says. “If you have passion, it will almost automatically make you good at what you do. You also have to be willing to take some risks and do things that aren’t in your comfort zone.”

Hollett notes that in his personal life, he found a partner whom he admires for her own ability to face daunting challenges. Pam Melroy is a former NASA astronaut who has spent more than 38 days in space over three missions, the last in 2007 as only the second woman to command the Space Shuttle. “Her willingness to set a goal and go straight for it, even when it seemed impossible, is impressive and a lesson for us all,” he says. “Everyone faces barriers, whether imposed on them or self-imposed, but it is the willingness and ability to face them head-on that allows people to reach their dreams.”