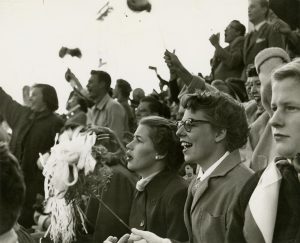 University of Utah fans sing and cheer at a football game during the 1950s. The song “Utah Man” has undergone several evolutions since it first came into use. (Photo courtesy Special Collections, J. Willard Marriott Library, University of Utah)

Its authorship is unclear. Its date of origin is murky. Its lyrics have been modified several times. Yet many of those who currently belt out “Utah Man” are fiercely loyal to “how it’s always been.” Turns out “always” isn’t necessarily such a long time.

“Utah Man” became the University of Utah athletics “fight song” in the early 1900s. With only minor changes, the song lyrics very closely resemble an 1885 fraternity song, “My Name is Sigma Chi,” likewise sung to the tune of the old folk song “Solomon Levi.”

Exactly how and when “Utah Man” became the U’s fight song is unknown. In a 1978 Daily Utah Chronicle article, U professor emeritus Mary Webster asserted that the 1904 U football team composed “Utah Man” during improvisational sing-alongs on Head Coach Joe Maddock’s porch. Others insisted the song originated with his predecessor, Coach Harvey Holmes (1900-1903). The first currently known mentions in print are a May 1907 Chronicle item noting that “A Utah Man” was sung during an outing of the U’s Normal (public school teaching) Department, and a page in the U’s 1907 Utonian yearbook that included the song’s lyrics.

Like the Sigma Chi song, the original version of “Utah Man” included the line “We drink our stein of lager and we smoke our big cigar.” By 1942, that had been changed in the U fight song to “our coeds are the fairest and each one’s a shining star.” Those lyrics became the new standard until this past summer, when the first part of the phrase was modified to “our students are the finest.” The official 2014 version includes “fan” as an alternative anywhere “man” was originally used in the lyrics, and “no other gang of college men” became “no other band of college fans.”

Several other universities nationwide also have updated their fight songs over the years to reflect modern sensibilities. The University of Mississippi in 2009 trimmed one of its fight songs to discourage fans from chanting “the South will rise again.” In 2007, the University of Hawaii at Manoa changed “Here’s to each valiant son” to “Here’s to each valiant one.” And Michigan State University, originally known as Michigan Agricultural College, modified “its specialty is farming” to “its specialty is winning,” among other changes.

At the U, alternatives to “Utah Man” have been proposed in the past but didn’t prevail. In May 1934, The Utah Alumnus announced that “the students of the University have become tired of singing ‘Utah Man’… [and] they are after a new Alma Mater song.” A contest offered awards for both words and music, and by 1937, the song “Fair Utah” was on offer, but by popular sentiment, it was decided the song wouldn’t replace “Utah Man” and would merely supplement it. In 2000—the year sportswriter Rick Reilly famously mocked the “jolly” references and tone of “Utah Man” in Sports Illustrated—the University of Utah debuted a new “Utah Fight Song,” with music by Mormon Tabernacle organist emeritus Robert Cundick BA’49 MFA’50 PhD’55. But again, Cundick and others emphasized that the song “was not a threat to the status quo—it was just an addition.”

The latest evolution in the lyrics to “Utah Man” was approved this year after faculty members and student leaders spearheaded efforts to modernize the lyrics and address concerns expressed in recent decades that certain words and phrases were sexist or racist. The new lyrics will be printed in all current versions of the song, but U President David Pershing has said fans can sing whichever version they prefer.

So sing it loud, sing it proud, and realize that “traditions” do change. Perhaps one day, “jolly” Utah fans will even decide it’s time to toughen up that line.

Read the complete lyrics to “My Name is Sigma Chi” here.

4 thoughts on “One More: Fussing Over the Fight Song”