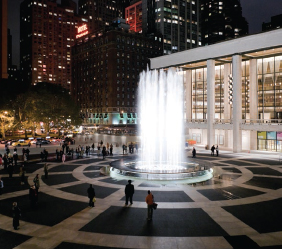 This was a very intriguing article (“A Big Splash,” Fall 2015). I have marveled at many of these water features without knowing their connection to my alma mater. Thanks for the story!

Great story! I can’t thank the U enough for the great education I received. My master of public administration degree led to my current position as registrar of voters for Marin County, California

Love this poster! (“The Curie Poster,” Fall 2015) It’s great to see U women recognized for following in Marie Curie’s footsteps. Admirers of Marie Curie may like to look at the Marriott Library’s ﬁrst edition of Traite de Radioactivite, Paris, 1910 (QC721 C98 1910), held in the Rare Books collection. Traite is Curie’s fullest statement on radioactivity, a word she created for a concept that she invented and deﬁned. One year after the publication of Traite, she became the ﬁrst scientist to be awarded a second Nobel Prize, for the isolation of the elements radium and polonium.

I wish to congratulate Tomi Carr, Dave Titensor, and Marla Kennedy as well as [the Continuum editors] for the impressive “Curie Poster”! It is an innovative way to recognize a Nobel Prize-winner. Her legacy remains well in Poland today, and your artwork is a testimony of the good things that come out of the U. Thanks for printing it, and for its impact on those of us with Polish heritage.

Bill was a great guy (“A Book for Life,” Spring 2014). He was a gentle and kind man who could play the drums almost as good as basketball. I dated him in ’61 and ’62, until racial prejudice got so bad for us that Coach Gardner told him we had to stop seeing each other. [Billy McGill was black, while Nelson is white.] Bad PR, I suppose. Still, I thought the world of him, and he was lots of fun.