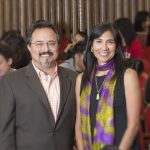 As a 2014 Utah Ethnic Studies graduate, this article [“Partners for Diversity,” Summer 2014] put a huge smile on my face! Keep up the great work, you two [Dolores Delgado Bernal and Octavio Villalpando]!

The minor in Spanish that I received at Utah has been a wonderful addition to my great appreciation of Latin culture. Language and culture studies are an integral part of the university experience. Yes, we should market that experience the best we can to a diverse population.

But we cross a line when marketing and student outreach becomes outright political activism. This article uses words such as “activist” or “social change” several times. What is activism other than an effort to exert political influence? I want to send my children to schools that teach world culture in an objective light without an agenda. Is there a way to promote diversity in a way that promotes respect for everyone and in a way that diminishes racial and sexual dividing lines, rather than putting them into sharper relief? I hope so, but having read this article, I don’t think the University is accomplishing it.

Sounds of the West

Loved reading about Jeff [Rice] and [Kenning] Arlitsch and their wonderful project—so important to document and preserve the sounds of life [“Listening to the Natural West,” Summer 2014]. I will check out the [University of Utah’s J. Willard Marriott] library for sure. Good work—I’m glad someone is doing this.

Regarding [Ed] Catmull [“Cultivating Inspiration,” Summer 2014]. I heard him on a PBS talk show a couple of months ago. While he didn’t say so, I was certain he was from Salt Lake, and bought the book [Creativity, Inc.] immediately. It is a great and inspirational book.

Kudos for the Rock

Was happy to see the Rostrum getting some press [“The Campus Rostrum,” Spring 2014]. As a classics professor at the U, I have been intrigued by this lonely monument since I hired on here. You filled in some gaps about the history of the Rostrum in the ’50s and ’60s that I hadn’t come across. I wonder about the switching out of the stone. Some of the images do seem to contain a stone that looks taller than the one that sits in Presidents Circle now….

So this is the centennial of the Rostrum!!!

We visited the Rostrum today on its centennial day, April 16, 2014. Wondering what it meant, I came across this article. After comparing my photos and those in the article, I’d say it is the original rock. Or would like to think so. Thanks for the interesting history.