From humble beginnings, the University of Utah theater program has grown into a major player on the collegiate stage. 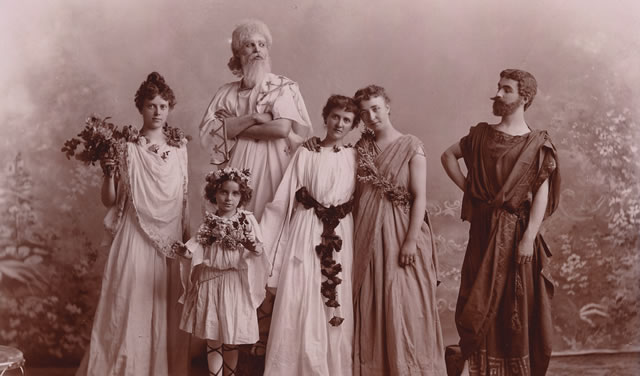 Some of the cast of Eleusinia, the first production by a University of Utah theatrical troupe.

While Utah, as a state, has a distinguished history of theater, in the early days of the University of Utah there was little money to support a theater program. That began to change in 1892, when Maud May Babcock became a member of the faculty. Besides starting the women’s physical education program and teaching elocution, Babcock lobbied for a University theatrical troupe and a place to stage productions. In 1895, her efforts paid off with a production of Eleusinia (a theatrical interpretation of an ancient Greek festival), held in the old Salt Lake Theater on June 6. The success of that production led to the formation of a University Dramatic Club in 1897, and from that time on, with only a few interruptions, the University of Utah has served as a center for amateur plays. Several have been staged each year, ranging from light comedies and musicals to serious dramas. Since there was no theater on campus initially, productions were held at venues around the Salt Lake valley besides the Salt Lake Theater, including LDS ward chapels, local high school auditoriums, and even outdoors on a specially built stage at Wandamere Resort (now Nibley Park). A major change in the University’s theater program came in 1913-1914, when control over the production of all plays was vested in a five-member Dramatic Council. This was followed in 1917 by the formation of the Varsity Players, and, that same year, a room in the Museum Building (now known as the Talmage) was converted into a small stage. The old Salt Lake Theater was razed in 1929, but University thespians finally gained a full-scale stage of their own with the completion of Kingsbury Hall in 1930. University theater flourished throughout this period, with a number of other troupes besides the Varsity Players featured, such as The Mummers, the University Musical Stagers, both “Boys” and “Girls” dramatic clubs, and companies from the U’s strong opera program. When Babcock retired in 1938, she was praised by The Daily Utah Chronicle (April 21, 1938), as “the ‘first lady of Utah drama,’ [who] has been continuous head of the speech department and has directed 41 varsity plays.” Shortly after her retirement, the University’s drama program was reorganized as the University Theater. Productions were suspended for the most part during World War II, but the tradition was kept alive by speech and drama professor Gail Plummer, and later C. Lowell Lees, who became head of the Speech Department in 1943. Other strong supporters of theater during the years after the war were Lila Eccles Brimhall, who taught speech and theater, and Keith Engar, former chair of the Theatre Department. In 1962, Pioneer Memorial Theater, a replica of the old Salt Lake Theater, opened, with stages named in honor of professors Babcock and Lees, giving the University’s performers (as well as the professional Pioneer Theatre Company) a home of their own and ensuring that the University of Utah will remain at the forefront of college and university theater programs for years to come.