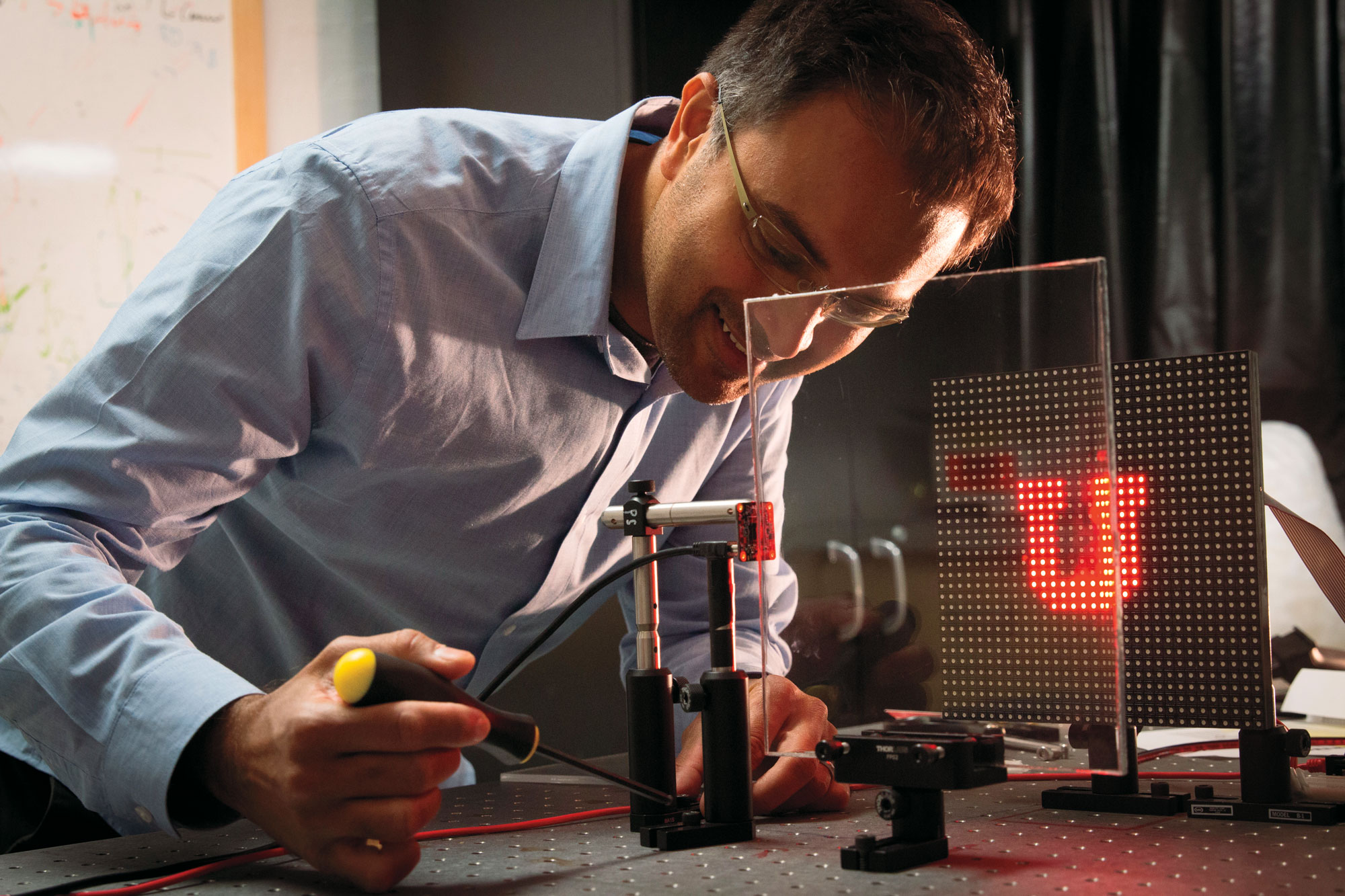 Picture This: A Window that Works as a Camera

Imagine your car windshield as a giant camera, sensing objects on the road, or the windows in your home serving as security cameras. Soon, these scenarios could become realities thanks to a team of U electrical and computer engineers led by Professor Rajesh Menon. The researchers have invented a camera in which a regular pane of glass or any see-through window can become the lens.

Cameras were developed first with the idea that humans look at and decipher the pictures. But Menon wondered if, instead, a camera could be developed that would be interpreted by a computer running an algorithm.

If a normal digital camera sensor, such as one for a mobile phone, is pointed at an object, without a lens, the result is a pixelated, blob-like image. But within that blob is still enough digital information to detect the object if a computer program is properly designed to identify it.

Through a series of experiments, researchers developed a method to do just that. The result is a low-resolution, black and white picture good enough for applications such as obstacle-avoidance sensors for autonomous cars. The method can also produce full-motion video as well as color images, and more powerful camera sensors can produce higher-resolution images. Applications for lens-less cameras are endless.

Menon and his team will continue to develop the system to include 3-D images, higher color resolution, and photographing objects in regular household light.

Having ADHD Could Increase Risk of Parkinson’s Disease 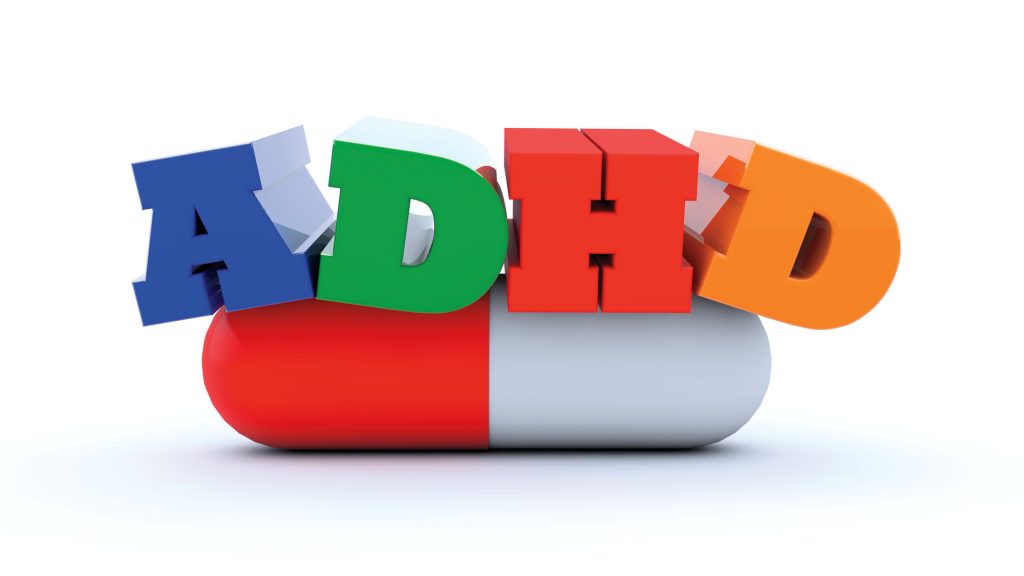 A new study by a team of U researchers indicates that an early-onset form of Parkinson’s disease may be more likely to develop in people with attention deficit hyperactivity disorder, or ADHD.

Parkinson’s is a neurodegenerative illness, mostly affecting people 60 or older, with symptoms including rigidity, tremors, difficulty walking, and then cognitive issues at later stages of the disease. Its cause has not yet been determined, but scientists believe it could be a combination of genetic and environmental factors. In the United States, about 50,000 people are diagnosed with the disease each year.

The U study analyzed roughly 200,000 Utah residents with Parkinson’s who were born between 1950 and 1992. Of those, around 32,000 had also been diagnosed with ADHD. Those with ADHD who had not been treated with any stimulants were more than twice as likely to develop Parkinson’s or Parkinson’s-like disorders than similar individuals without ADHD. If ADHD patients had been treated with Ritalin or other amphetamines, the likelihood of developing a Parkinson’s-like disease was six to eight times higher.

The researchers noted that patients with more severe ADHD may inherently be at an increased risk for motor neuron diseases like Parkinson’s, and the findings may or may not be a result of the stimulants. Future studies are needed to confirm a conclusion. 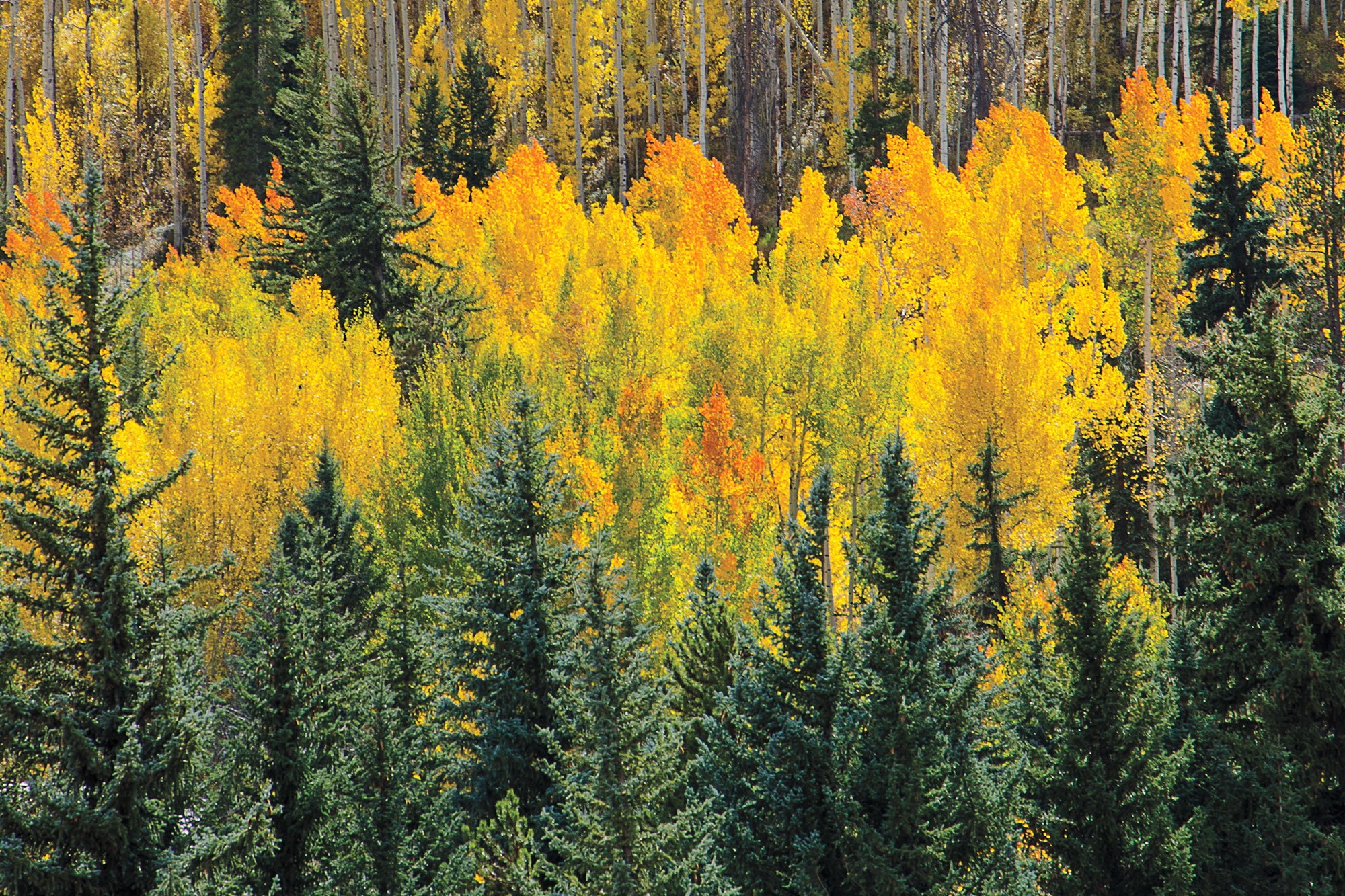 Why Diverse Forests are Stronger Against Drought

Diversity indicates strength, even among forests. And according to a team of researchers led by U biologist William Anderegg, forests with trees that have a high diversity of traits specifically related to water use (hydraulic diversity) suffer less impact from drought. That fact is very helpful to those who work to rebuild forests after damage caused by logging or wildfires, because droughts don’t go after individual trees but affect entire ecosystems.

The term “hydraulic diversity” refers to variations in how water moves inside trees and is the leading predictor of how well a forest can handle drought. Researchers found that the most resilient forests had many different kinds of trees, such as both conifers and deciduous types, and different rooting depths.

For the study, researchers compiled data from 40 forest sites around the world, measuring their flows of carbon, water, and energy. That data was merged with what is known about the tree species at each site, and the known hydraulic traits associated with those species. Forests with a greater diversity of hydraulic traits in their tree species maintained higher forest function than less diverse forests, such as a Christmas tree farm. So, in considering ecosystem recovery from trauma such as fire and logging (and for resilience to future climate), the researchers are now thinking about the best mixes of multiple species to increase landscape resilience.

In October, Anderegg received the prestigious Packard Fellowship for Science and Engineering from the David and Lucile Packard Foundation for his research on the effects of climate change and drought on forests. He was awarded a five-year, $875,000 grant to further his research. 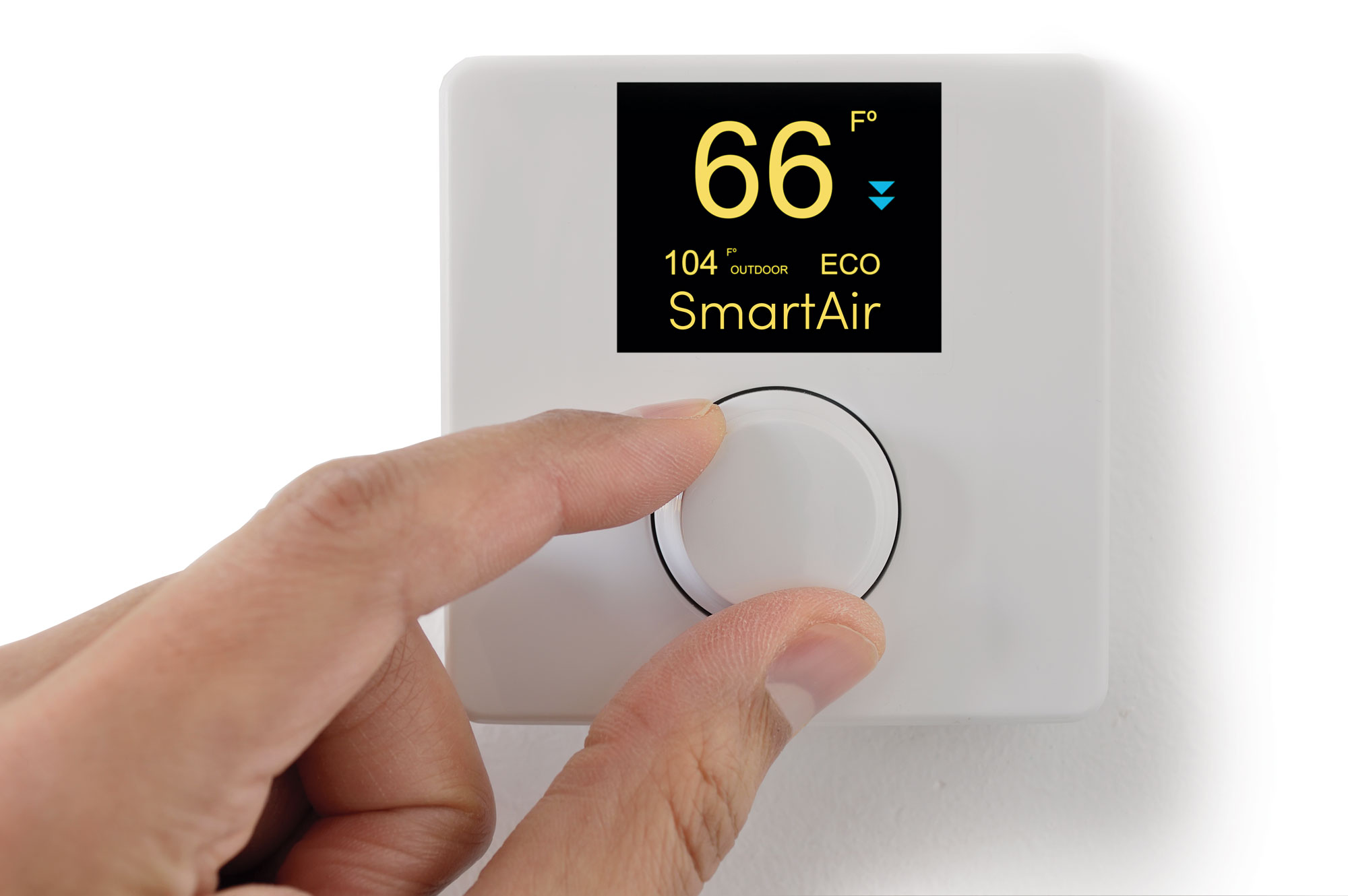 Heating, ventilation, and air conditioning systems (HVAC) are not only great for keeping a home warm or cool, but they also help clean the air of harmful pollutants. While standard home thermostats control HVAC systems based on temperature alone, U engineers studied the effects of also controlling them based on a home’s indoor air quality. They discovered that programming an air conditioner and furnace to turn on and off based on both the indoor air quality and the temperature uses only slightly more energy but keeps the air much cleaner.

The researchers figured this out by purchasing a series of off-the-shelf portable air pollution sensors and connecting them wirelessly to small and inexpensive computers. Sensor settings included “Normal” (turned on and off based on temperature only), “Always On,” (operating continuously all day), and “SmartAir” (fan turned on and off based on the pollution measurement in the house as well as the thermostat’s temperature setting). The five-month study revealed that using the SmartAir setting cleaned the air almost as well as if the HVAC fan were operating all day but used 58 percent less energy. Using the Normal setting resulted in 31 percent dirtier air and used only 18 percent less energy.

Ordinary home activities such as cooking, vacuuming, and running a clothes dryer can cause inside air to be much worse than outside air, and continual exposure to indoor air pollutants can lead to negative health effects. To date, there are no known home or commercial HVAC systems that are controlled by air quality sensors.

Induce at 39 Weeks or Risk C-section at Term?

To induce or not to induce? That is a question many expecting parents ask themselves and their doctors. Shedding more light on the topic, a new U study found that inducing labor in healthy women at 39 weeks into their pregnancy can reduce the need for cesarean sections and is at least as safe for mother and baby as waiting for spontaneous labor. Choosing to induce also could reduce the risk that mothers will develop preeclampsia and that newborns will need respiratory support after delivery.

The study, which enrolled 6,100 first-time mothers, was prompted by concern around the increasing number of babies being delivered by C-section in the U.S., holding at 32 percent since 2016. Medically unnecessary caesarian deliveries in healthy first-time mothers account for 80 percent of those deliveries, increasing risk for complications to both mother and baby, and to future pregnancies. Women who deliver by C-section once are more likely to continue delivering that way, increasing the likelihood of high-risk complications, since the procedure is considered major surgery.

On average, women who chose to induce at 39 weeks delivered about one week earlier than women who waited for spontaneous labor, and C-section delivery was less likely after elective induction. Researchers estimate that inducing labor at 39 weeks could eliminate the need for one C-section for every 28 deliveries. 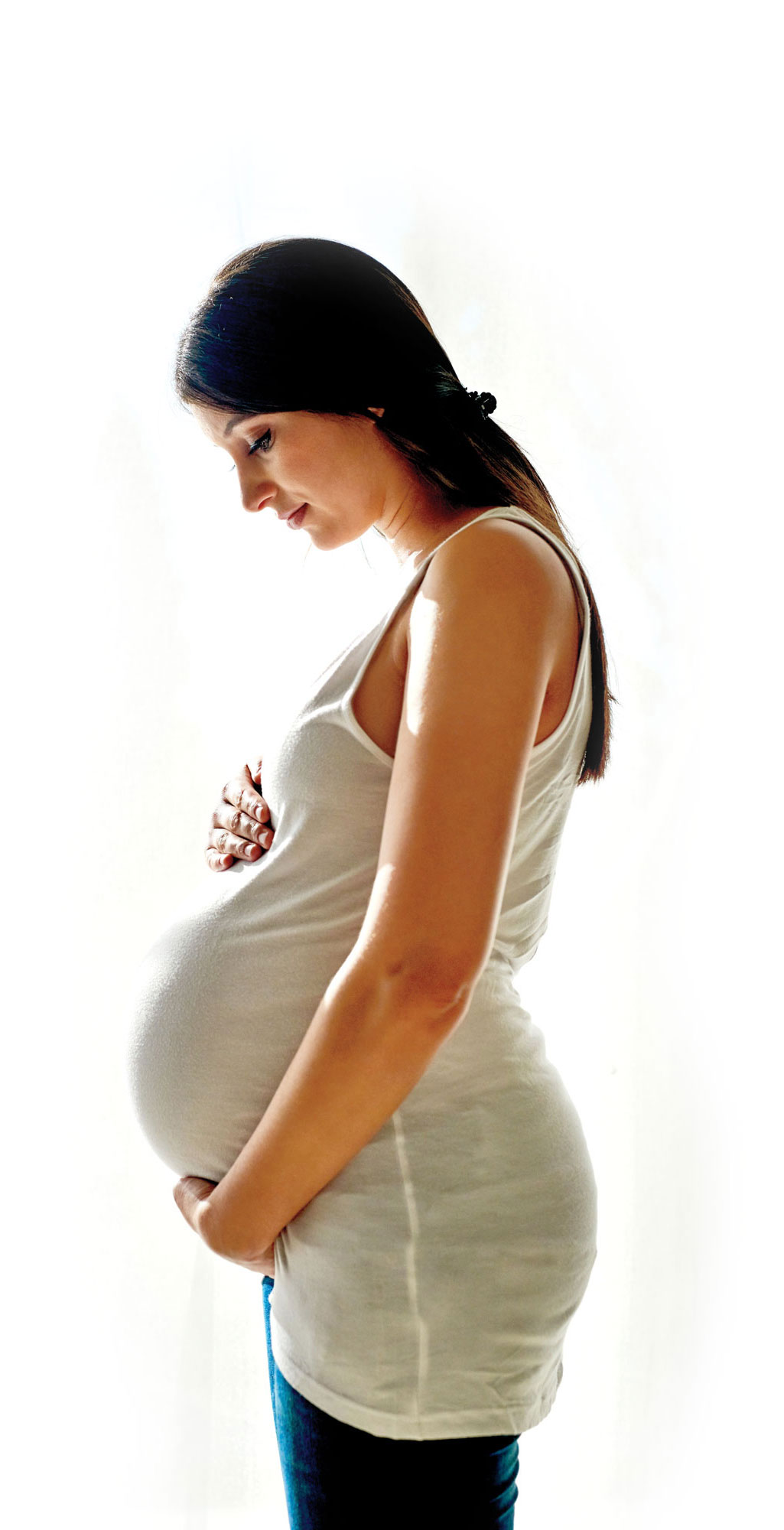