WHAT DRIVES HATE IN THE U.S.?

Seeking to understand what fuels hate in our country, U geographers confirm in a new study the grim reality that hate has become a national phenomenon and is more complicated than they had imagined. Though hate has always existed, 2016 saw a near record high in the number of hate groups in the U.S., according to the Southern Poverty Law Center (SPLC).

A hate group is defined by the SPLC as a group with beliefs or practices that malign an entire class of people due to their indisputable characteristics such as race, gender, religion, ethnicity, disability, or sexual orientation. U researchers began their study by mapping the patterns of active hate groups for every U.S. county, using the SPLC database from 2014, and then analyzed their potential socioeconomic and ideological drivers—diversity, poverty, education level, population stability—and ideological factors represented as religion and degree of conservativism.

They found that in all U.S. regions, less education, population change, ethnic diversity, conservative political affiliation, and higher poverty correlate with more hate groups, and that the geographical region seems to determine whether religion has a positive or negative relative effect on the number of hate groups for the county.

“Those involved in hate group activities see their actions as a way to secure the future of their people. Unfortunately, that fear turns to hate, and in the worst case, violence,” says Richard Medina PhD’09, assistant professor in the Department of Geography at the U, and senior author of the study.

“Some people have strong feelings about who belongs and who doesn’t belong in ‘their’ place,” says Emily Nicolosi MS’15, doctoral student at the U and co-author of the study. “When they see people coming in that they think don’t belong, their very identity feels threatened.”

Medina and Nicolosi want their paper to help people understand how little is known about hate. “Hopefully this study motivates people to start asking more questions, especially right now,” says Medina. “We have a long way to go before we really understand the drivers and patterns of hate in this country.”

Could the Ocean Offer Alternatives to Opioids? 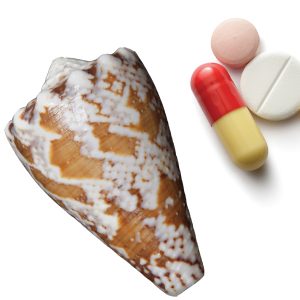 What does a marine snail’s ability to kill prey with venom have to do with the opioid epidemic ravaging the U.S.? More than you might imagine.

A team of researchers at U of U Health—with expertise in biology, anesthesiology, pharmacology, and medicinal chemistry—has received a four-year grant of approximately $10 million from the Department of Defense that will be used to identify new, natural compounds for developing non-opioid drugs for pain management. The team is turning to ocean organisms to find the next generation of therapeutic pain medications.

Conus regius, a small, predatory cone snail common to the Caribbean Sea, already has been identified by the research team for the potential analgesic properties of its venom. The team aims to use the compound from C. regius to develop a stable drug that can be metabolized in the body to elicit an analgesic effect, similar to opioids for chronic pain, but with far fewer side effects and no addictive qualities. This project will also expand on that research to explore compounds from the venom of a variety of other marine mollusks.

Why the Elderly Easily Break Bones 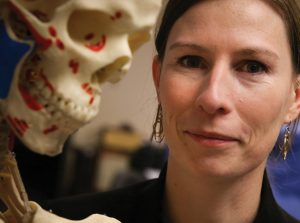 Why do so many older people break a bone in a fall? To find the answer, Claire Acevedo suggests that doctors and researchers might want to look at the human skeleton in much the same way that civil engineers analyze buildings and bridges. Acevedo, a U mechanical engineering assistant professor, says that in engineered materials and structures, cyclic fatigue accounts for more than 80 percent of all failures, leading to sudden accidents such as the breaking of railway axles, the collapse of metallic bridges, and the cracking of aircraft airframes.

Acevedo (pictured) and her team of researchers suggest in a new study that the bones of an older person become more susceptible to a break in much the same way—due to repeated stress from everyday activities such as walking, which creates microdamage that affects the quality of the bone. This belies the common belief that bone breaks in the elderly are largely due to one massive impact, such as a fall.

The vulnerability comes into play when a microcrack grows over time and slowly expands until the remaining cross-section of the bone that is still connected is too small and suddenly breaks. In that case, such fractures would be the cause of a fall rather than the result of a fall. Acevedo and her team suggest that as old bones gradually accumulate more microdamage, get weaker, and lose their ability to self-repair, doctors and researchers need to look beyond the effect of a single impact if they want to prevent such fractures and the high risk of mortality associated with them.

In 2001, U scientists placed the first of several carbon dioxide (CO2) sensors on campus to monitor air quality. Today, five sensors are placed around the Salt Lake Valley—the only multisite urban CO2 network with more than a decade of continuous measurements in the world. Because of that, more is known about CO2 in the Salt Lake Valley than in any other urban area, and those sensors are providing some surprises about how growth impacts emissions. U atmospheric scientists Logan Mitchell and John C. Lin and their team have discovered that emissions increase more in areas with suburban sprawl than with similar population growth in a developed urban core.

A sensor placed in an empty field of an undeveloped area of the southwestern part of the valley in 2004 was intended to represent rural areas. But today, that area has increased in population, along with significant increases in CO2. During the same time, Salt Lake City grew, too—by around 10,000 people. But the growth in population in the mature, urban part of the city did not lead to associated increases in CO2. The research team concluded that CO2 emissions around the valley were influenced as much by the type of neighborhood (i.e. land use) as by the total number of people moving into that neighborhood.

Lin plans to use the data to make projections about Salt Lake’s emissions future, including the city’s goal to reduce CO2 emissions by 80 percent by the year 2040. “Salt Lake City is one entity in the valley, but it’s not the only one,” says Mitchell. “If you reduce emissions by 80 percent and everyone moves out farther from work and commutes in, it’s actually not solving the problem.”

Computing Faster than the Speed of Light 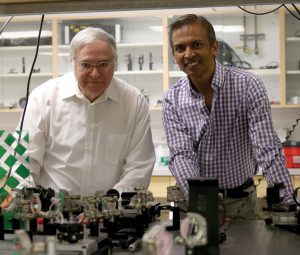 A mineral discovered in Russia in the 1830s, known as a perovskite, holds a key to the next step in ultra-high-speed communications and computing. U researchers Valy Vardeny and Ajay Nahata (pictured left to right) have discovered that a special kind of perovskite can be layered on a silicon wafer to create a vital component for the communications systems of the future—which they predict would allow cell phone and Internet users to transfer information a whopping thousand times faster than today.

That system would use the terahertz range (a band in the electromagnetic spectrum between infrared light and radio waves), using light instead of electricity to shuttle data. Nahata says it’s probably at least another 10 years before this technology is used in commercial products, but this new research is a significant milestone to getting there.