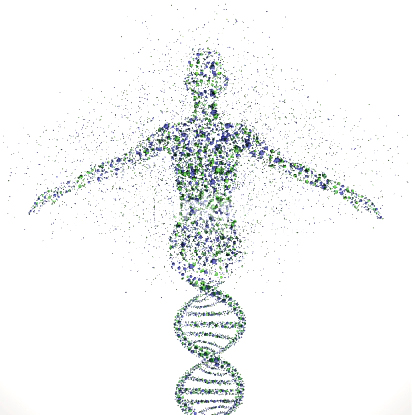 Mark Yandell and Gabor Marth want to make patient genome analysis as routine as a blood test. The two University of Utah professors of human genetics are codirecting a new USTAR Center for Genetic Discovery, launched in March with $6 million from the University and the state-funded Utah Science Technology and Research (USTAR) initiative.

The goal is to create a means to accurately translate a patient’s complete DNA sequence and reveal the genetic causes of health disorders within seconds. Presented in an easy-to-interpret format, the information is intended to empower health care professionals to prescribe the best, most cost-effective ways to control existing conditions and prevent or delay the onset of new ones.

Together with California-based Omicia, Inc., the new USTAR center is building a web-accessible informatics platform, called Opal, to distill genome data to clinically relevant findings. Opal is powered by VAAST, a proven disease gene-finder algorithm invented by Yandell. Launched less than two years ago, VAAST has successfully identified causes of inherited diseases, including hard-to-diagnose rare diseases, and is now used at 251 institutions worldwide.

The USTAR center is collaborating with Utah Genome Project investigators, who leverage an enormous collection of genealogical and health records to search for the genetic bases of cancers as well as immune, lung, heart, and other inherited diseases. Compared to 10 years ago, sequencing the human genome has plummeted in cost by a millionfold and can be completed in a fraction of the time. Yet there are still barriers preventing DNA sequence information from routinely being incorporated into patient care.

“Current systems are not prepared for the increasing amounts of data we will be seeing within the next few years,” says Marth. The U effort will process big data not only from personal genomes, but also tumor genomes and “metagenomes” from infectious disease agents such as viruses and bacteria. “We are building the information highway that is necessary for taking genetic DNA information from the sequencing machine all the way to clinical use,” says Marth.

A test that researchers at the University of Utah and Huntsman Cancer Institute helped develop to assess genetic risk for breast cancer has received FDA approval and is now being made available through ARUP Laboratories in Salt Lake City. The test uses gene expression data from 50 genes, weighted together with clinical variables to generate a risk category and numerical score, to assess a patient’s risk of distant recurrence at 10 years in postmenopausal women with node-negative (Stage I or II) or node-positive (Stage II), hormone receptor-positive (HR+) breast cancer.

The discovery of the PAM50 breast cancer “signature,” or the unique pattern of gene expression for a given cell or tissue, was a collaborative effort between a research group at Huntsman led by Dr. Philip Bernard, an associate professor in the Department of Pathology at the University of Utah and co-inventor of the test, and investigators at the British Columbia Cancer Agency, the University of North Carolina’s Lineberger Comprehensive Cancer Center, and Washington University in St. Louis. “This is the next generation of diagnostics, which embraces both the molecular and anatomic features of a tumor to provide a more accurate estimate of risk,” Bernard says. “The work of Dr. Bernard and his group is an important step in the implementation of personalized medicine in oncology,” says Dr. Mary Beckerle, the Huntsman Cancer Institute’s chief executive officer and director. “The field of genomics is revolutionizing how we define cancer and how best to treat the disease.”

The test is now being made available through ARUP as the Prosigna assay. As both a scientist and medical director of molecular oncology diagnostics at ARUP, Bernard has been able to see the results of his research translated into patient care. “FDA clearance was an important mark for us. It allows breast cancer patients in the United States and around the world to have a diagnosis quickly and be provided appropriate treatment,” he says.

University of Utah electrical engineers have fabricated the smallest plasma transistors yet that can withstand high temperatures and ionizing radiation found in a nuclear reactor or nuclear attack.

In addition to being a new tool in such instances of extreme environmental radiation, the transistors could someday enable smartphones to take and collect medical X-rays on a battlefield or equip devices to measure air quality in real time.

Transistors are the workhorses of the electronics industry. They control how electricity flows in devices and act as a switch or gate for electronic signals. Silicon-based transistors are a crucial component in modern electronics, but they fail above 550 degrees Fahrenheit— the temperature at which nuclear reactors typically operate. 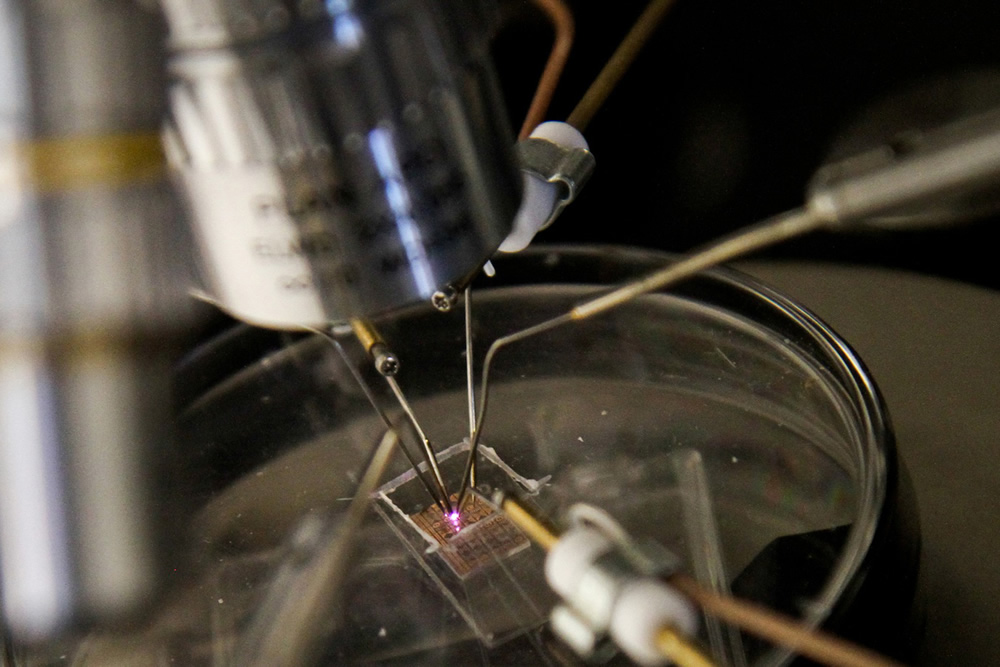 A closeup of a plasma transistor. (Photo by Dan Hixson, University of Utah College of Engineering)

“These plasma-based electronics can be used to control and guide robots to conduct tasks inside the nuclear reactor,” says Massood Tabib-Azar, a professor of electrical and computer engineering. “Microplasma transistors in a circuit can also control nuclear reactors if something goes wrong and also could work in the event of nuclear attack.”

Plasma-based transistors, which use charged gases or plasma to conduct electricity at extremely high temperatures, are employed currently in light sources, medical instruments, and certain displays under direct sunlight. These microscale devices are about 500 microns long, or roughly the width of five human hairs. They operate at more than 300 volts, requiring special high-voltage sources. Standard electrical outlets in the United States operate at 110 volts.

The new devices designed by Tabib-Azar and doctoral student Pradeep Pai measure 1 micron to 6 microns in length, or as much as 500 times smaller than current state-of-the-art microplasma devices, and operate at one-sixth the voltage. They also can operate at temperatures up to 1,450 degrees Fahrenheit.

Air flows mostly in a one-way loop through the lungs of monitor lizards, according to a new University of Utah study. The findings raise the possibility that this breathing pattern—also shared by birds, alligators, and, presumably, dinosaurs— originated about 20 million years earlier than previously believed. Why remains a mystery.

“It appears to be much more common and ancient than anyone thought,” says C.G. Farmer, the study’s senior author and a U associate professor of biology. 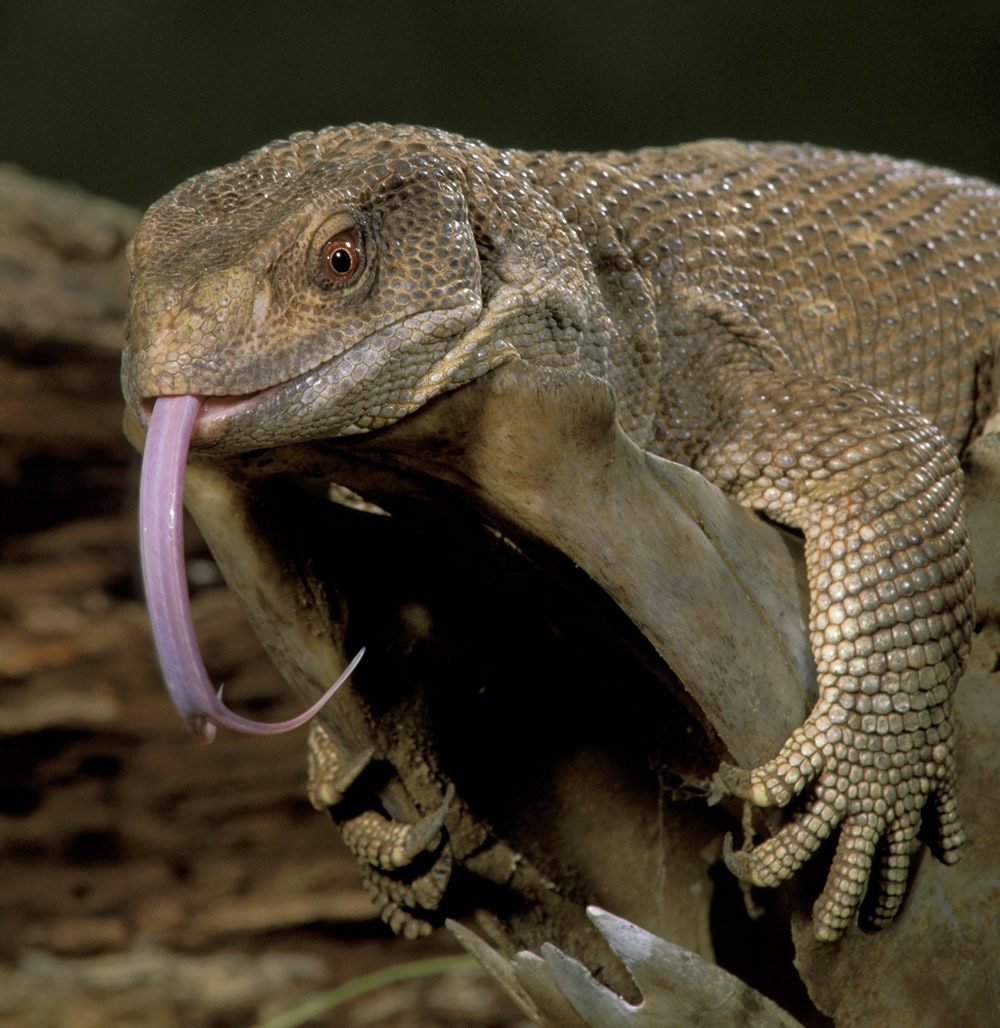 A savannah monitor lizard. (Photo by Cheryl
A. Ertelt)

One-way airflow may have arisen not about 250 million years ago among the early archosaurs (which gave rise to dinosaurs, alligators, and birds), but as early as 270 million years ago among cold-blooded diapsids, which were the common ancestors of the archosaurs and Lepidosauromorpha, a group of reptiles that today includes lizards, snakes, and lizard-like creatures known as tuataras.

Farmer cautions that because lizard lungs have a different structure than bird and alligator lungs, it is also possible that one-way airflow evolved independently about 30 million years ago in the ancestors of monitor lizards. More lizard species must be studied to learn the answer, she says.