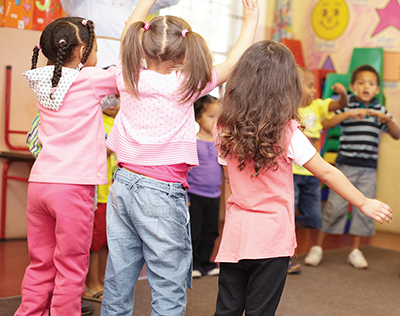 In a recent study, University of Utah researchers found that creative dance helped increase play skills in children with autism spectrum disorder. “Play is central to the development of children’s language and cognitive skills,” says Catherine Nelson, associate professor of special education at the U. “However, children with autism often have difficulties with social play and play with objects such as toys.”

The study examined methods for increasing the quality of play of three preschool-aged children with autism who were in classes primarily composed of children without disabilities. Therefore, the interventions chosen for the study were ones that all children in the classrooms could enjoy without singling out the children with autism.

Typical preschool activities include large-group circle time and learning centers that contain a variety of toys and materials. In this study, favored play materials of the children with autism were added to the learning centers along with associated toy accessories that increase the potential for child-to-child interaction. Creative dance activities were then added to the circle time, and new and interactive ways to use the added play materials were practiced during the activities.

“For example, one of the children with autism liked pushing small match box cars back and forth on the floor,” says Susan Johnston, chair of special education at the U. “Creative dance activities included having the children ‘drive’ around the room with hula hoops representing car steering wheels. …Following the dance activity, the child and his peers went to the learning centers, and instead of simply pushing the cars back and forth, he played with the other children, using the pretend play skills he had just practiced.”

By the end of the study, all three children demonstrated gains in social play skills as well as complexity of play with objects. However, the gains were not maintained when the intervention ended, suggesting that movement-based interventions can improve play skills in children with autism, but such interventions must be ongoing if gains are to continue.

On the eve of the 50th anniversary of the groundbreaking “Miranda ruling”—the U.S. Supreme Court decision that criminal suspects must be informed of their constitutional right to an attorney prior to police questioning—two U professors released study results suggesting that about 20 percent more violent crimes and 11.6 percent more property crimes would be solved each year without the Miranda requirements.

But Cassell and Fowles note that the research suggests that the harmful effects do not stem from the well-known “you have the right to remain silent” Miranda warnings, but rather from Miranda’s lesser-known procedural requirements. For example, the Miranda procedures generally prevent police from questioning a suspect in custody unless he or she agrees to be questioned. Such expectations could be replaced by a requirement that police videotape questioning, a change Cassell and Fowles believe could result in a “win-win” solution that would not only allow police to obtain more voluntary confessions from suspects but also provide safeguards against false confessions or inappropriate police pressure.

A first look at the giant shipworm 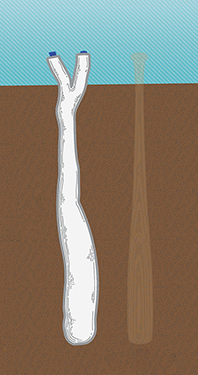 The average giant shipworm is about the same size as a baseball bat (three feet long), and they are protected by a hard, white shell. (Image courtesy U of U Health)

Mother Earth still has a surprise or two up her sleeve. Scientists at the U recently led an international team of researchers who were the first to investigate a never-before-studied species—a large, worm-like animal called Kuphus polythalamia, or the giant shipworm.

People have known about the existence of the creature for centuries. A native of the Philippines, the animal’s three- to five-foot long, tusk-like white shells were first documented in the 18th century. But researchers had never before been able to study the living animal, a black, mud-dwelling species that is really a marine bivalve mollusk, like clams and mussels. “Being present for the first encounter of an animal like this is the closest I will ever get to being a 19th-century naturalist,” says the study’s senior author, Margo Haygood, a research professor in medicinal chemistry at the U’s College of Pharmacy.

The animal’s preferred habitat was unclear until scientists came upon a video showing the creatures seemingly planted, like carrots, in the mud of a shallow lagoon laden with rotting wood, with just the tops of the shells protruding. Now, researchers are learning about the unique and bizarre way the giant shipworms acquire energy with the help of bacteria that live in their gills. Normal shipworms burrow deep into the wood of trees that have washed into the ocean, munching on and then digesting the wood with typical internal digestive organs. The giant shipworm gets energy from its beneficial bacteria in a way much more similar to how green plants use the sun’s energy to convert carbion dioxide during photosynthesis. Haygood is investigating whether medicines might be developed from the shipworm bacteria.

Utah is no small potatoes in ethnoarchaeology 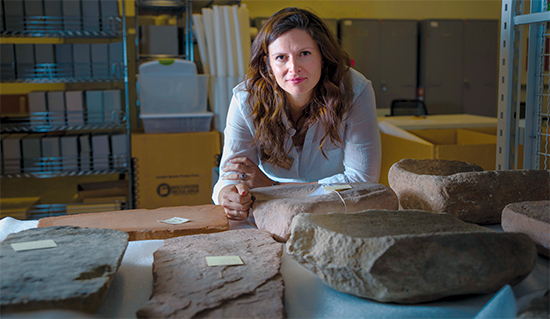 A new archaeological finding in the southern Utah town of Escalante may rewrite the story of tuber domestication.

Researchers from the U’s Natural History Museum of Utah and Red Butte Garden have discovered potato starch residues in the crevices of a 10,900-year-old stone tool within Escalante’s borders—the earliest evidence of wild potato use in North America. This is the first archaeological study to identify a spud-bearing species native to the southwestern United States, Solanum jamesii, as an important part of ancient human diets.

The researchers pieced together evidence from stone tools, ethnographic literature, and modern gardeners to show that Utahns have used the species intermittently for more than 10,000 years. The Escalante area was even previously known as “Potato Valley” to early settlers.

Native American tribes including Apache, Hopi, Kawaik, Navajo, Southern Paiute, and Zuni consumed S. jamesii, and some still tend their potato populations in cultivated gardens. The long history could mean that the species was transported, cultivated, or even domesticated. If true, S. jamesii would be the first example of a plant domesticated in the western U.S.