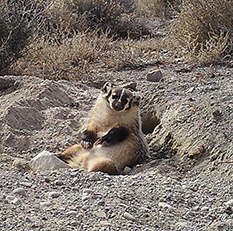 While studying scavengers in Utah’s Great Basin Desert, U biologists observed an American badger do something that no other scientists had documented before: bury an entire calf carcass by itself.

While badgers and their relatives are known to cache food stores, this is the first known instance of a badger burying an animal larger than itself. The finding suggests that badgers may have little or no limit to the size of animal they can cache, and that they may play an important role in sequestering large carcasses, which could benefit cattle ranchers in the West. “This is a substantial behavior that wasn’t at all known about,” says U senior Ethan Frehner, first author on the paper documenting the finding.

Badgers spend a significant amount of time either underground or in nocturnal behavior, which is hard to directly observe. Camera traps, a relatively new tool for researchers, made it possible to document the caching. A badger at another site in the study also attempted to bury a calf carcass, suggesting that the behavior could be widespread.

Badgers cache food to isolate it from other scavengers and make it last longer. But doing so could also provide an ecological service to ranchers, many of whom see badgers as pests, because they dig burrows through rangeland and can eat chickens. But burying carrion could prevent disease from infecting other cows. And, adds fellow U senior Tara Christensen, “If the carcasses are being buried, they’re not going to be attracting large predators.”

Both Frehner and Christensen participated in the study as undergraduates. The work was funded by a National Science Foundation Graduate Research Fellowship to doctoral candidate Evan Buechley. The team’s research was covered by dozens of major media outlets, including National Geographic, NPR, and Newsweek. The time-lapse video of the caching had garnered more than 1.5 million views as of mid-May, more than any other video produced by the U.

Once breast cancer spreads through the body, it can degrade a patient’s healthy bones, causing numerous problems. Scientists at Huntsman Cancer Institute (HCI) at the University of Utah have identified a new way that bones get destroyed through cancer. And they’ve also learned how to block that destruction with a new drug. Initial tests with patients show promising results.

Forty-thousand people die every year of breast cancer because the disease has spread to other sites in the body. And approximately 75 percent of the time, it spreads to their bones. Alana Welm, an investigator at HCI and associate professor of oncological sciences at the U, explains: “It’s a similar process to what happens in osteoporosis, except to a much greater extent. The cancer causes bone to be eaten up.”

Welm and colleagues discovered that a protein called Ron is responsible for destroying the bone. In mice, the scientists then studied what happened if they knocked out the gene containing the Ron protein. “We found it completely protected the bones from destruction,” says Welm. But it isn’t possible to simply knock out peoples’ genes. So to test the process in humans, HCI scientists worked with a biotechnology company that was developing an oral drug that blocks the activity of Ron. Welm’s group first tested this drug in mice and again saw positive results.

The biotech company was conducting a Phase 1 clinical trial to test the Ron inhibitor in men and women with various types of cancers, so Welm and her group collaborated with them to investigate the effect of the drug on human bones. The data showed encouraging results, and the drug was also well-tolerated in patients, with few side effects. But this trial was initially created only to test the safety of the drug. The next step will be specifically testing the drug in clinical trials with breast cancer patients.

Welm thinks the drug might work well in combination with existing drug therapies to improve outcomes for patients, especially those whose disease is resistant to current treatments. She also believes the drug could potentially be used for patients with other types of cancer that degrade bones, or for non-cancer-related osteoporosis. 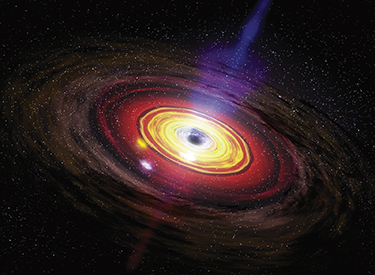 Artist’s depiction of a supermassive black hole. Illustration by Dana Berry of SkyWorks

Three years ago, a University of Utah-led team discovered that an ultra-compact dwarf galaxy contained a supermassive black hole, then the smallest known galaxy to harbor such a giant black hole. Now, the same group of U astronomers and colleagues has found two more examples of the phenomenon, suggesting that black holes lurk at the center of most of these galaxies— potentially doubling the number of supermassive black holes known in the universe—and that the dwarfs are likely tiny leftovers of massive galaxies that were stripped of their outer layers after colliding into larger galaxies.

“We know that galaxies merge and combine all the time—that’s how galaxies evolve. Our Milky Way is eating up galaxies as we speak,” says senior author Anil Seth, assistant professor in the Department of Physics & Astronomy. “But we have a really incomplete picture of that.”

Chris Ahn, postdoctoral candidate in the Department of Physics & Astronomy, and lead author of the international study, notes: “Maybe a fraction of the centers of all galaxies are actually these compact galaxies stripped of their outer parts.”

Stopping Chronic Pain Before it Starts 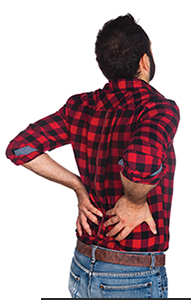 For millions of sufferers, there is nothing more debilitating than chronic back or joint pain. It can feel like a lifetime of misery. But researchers led by U bioengineering assistant professor Robby Bowles have discovered a way to curb chronic pain by modulating genes that reduce tissue- and cell-damaging inflammation.

Typically, inflammation is nature’s way of alerting the immune system to repair tissue or tackle infection. But chronic inflammation can instead lead to tissue degeneration and pain. Slipped or herniated discs, for example, are a result of damage after inflammation causes cells to create molecules that break down tissue.

Bowles’ team is using new genetics technology to stop the process. “This has applications for many inflammatory-driven diseases,” Bowles says. Now that researchers know they can do this, doctors will be able to modify genes via an injection directly to the affected area.

“The hope is that this stops degeneration in its tracks,” says Bowles. So far, the team has developed a virus that can deliver the gene therapy and has filed a patent on the system. They hope to proceed to human trials after collecting more data.